{week four}
The pumpkins are dying back and are increasingly turning a beautiful orange;
the zucchinis are giving me a rest and have slowed down to a trickle- two or three monsters were found and we’re leaving to see how big they’ll get;
the sweet potatoes are flowering- I didn’t even knew they flowered! It looks much like a white morning glory with a red-violet center;
the beans have been a huge disappointment with a yield near a tenth of what it was last year- we’re already contemplating changes for next season;
fall crops have been planted- many varieties of lettuce, kale, spinach, swiss chard, shelling and snap peas- germination rates aren’t what I hoped, but hopefully what did spring up will produce nicely;
the chickens gained access somehow and trampled the carrots. I’m hoping it won’t affect them too much, it was going to be a nice year;
the onions may end up small, but they are still growing since I’m not noticing any die back. I’m just happy they’re there;
I already shared what happened with the corn and the mystery veggie was pulled out while the popcorn is standing tall and bravely fighting the huitelacoche aka corn smut aka Mexican Truffles;
tomatoes and peppers are beginning to yield. I wish I had labeled the peppers. I can’t tell if the hot ones are paprika or chili; 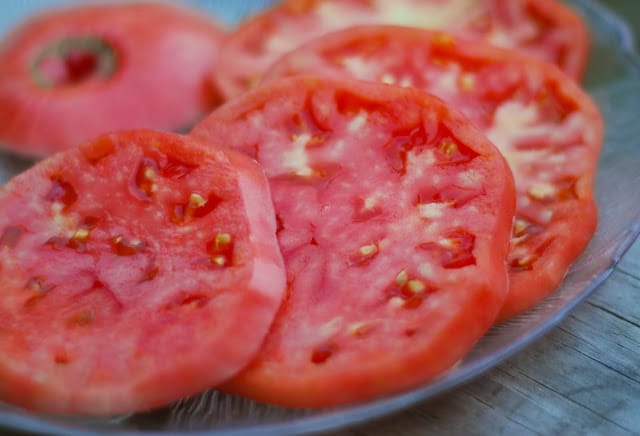 Pruden’s Purple Heirloom Tomato
A potato leaf variety that seems to be prone to splitting. The fruit is large at over a pound each and as you can see has a ton of flesh and very little pulp and seeds. Unfortunately, I find them to be bland (we’ll call them mild, for a more polite term) for a tomato and this coming from somebody who wouldn’t touch a tomato a few years ago! They’re just starting to really come in, but the couple I’ve had so far needed a ton of seasoning.
and finally, the bagged potatoes are just starting to die back while the hill in the ground is still green. I’m looking forward to comparing the two when we harvest them at the end of September. Look who was living in my tomatoes. A brilliantly colored garden spider… with a missing leg. A few days after I photographed her, she disappeared and we found an egg sack tucked away further down the row. I’m contemplating keeping my eye on it for further exploration.
It’s just that they’re big. Really big. And I’m squeamish.
Sure they’re harmless and very pretty if you give them a chance. But they’re big. And big spiders scare me.
In fact, I screamed when I first saw her.
I was already very leery amongst the tomatoes ever since I had a run in with a few tomato hornworms. Sorry, no photos due to a sudden and violent massacre. I know, you must be so disappointed. For those of you willing to live with them in order to encourage the growth of their parasitic garden counterpart, the braconid wasp, good for you. You’re a bigger girl than I am. I considered it for exactly .15 seconds before I decided I could never return to the tomato patch again if I was to constantly be on the lookout for the humungous caterpillar.
I had just been telling my aunt a day or two prior how we had noticed the tomato plants looked like they had been topped and a few days later like someone had literally come along and taken a bite from the tomatoes while leaving them on the vine. Then I immediately spotted the giant ‘pillar poo. So I knew what I was dealing with. I also knew that as soon as I spotted the ‘pillar, it would scare the daylights out of me.
And sure enough, I screamed.
My valiant men came to the rescue. They located a handful of them, all of whom they speedily disposed of.
My aunt proceeded to relate to me how a similar event  happened to her as a young girl except it was in the beans and with a garden spider.
Then the very next time I was in the tomato patch, there Mrs. Spider was hanging from my trellis. And there I was screaming, except I’m not a young girl. I’m a mother of six and I should locate my self-respect because it seems to be missing.