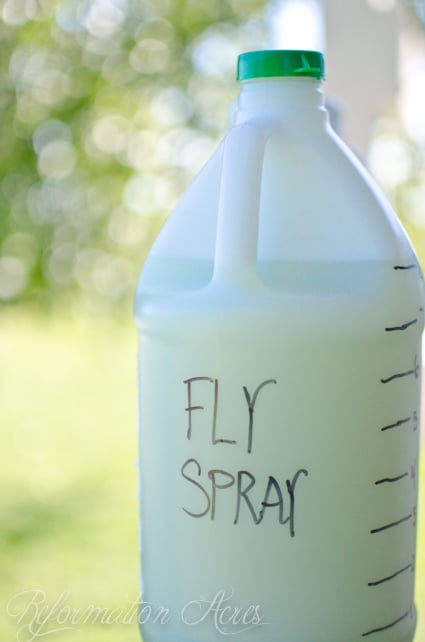 I hate seeing my poor cows inside a cloud of swirling flies during the hot summer months. I can only imagine how extremely aggravating that must be and I wanted to find a natural organic fly spray to repel the bugs and give my cows some relief. After experimenting with some homemade recipes, I’ve been using this homemade fly spray on my livestock with success. It will work just as well on your horses, goats, sheep, or even dogs. In fact, it’s safe enough for people too!

Early yesterday morning I thought I would take advantage of the children being in bed, the glorious morning sounds & sunrise, and the cool of the day to do some pasture clipping with the scythe (since the sheep are falling down on the job and all.)

I’m running about a week behind and the thistle are blooming so I know I have about no time to spare before they start spreading their infectious cottony tufts throughout the grass.

Before heading out, I stopped in at the milking parlor to have Bill put an edge on the blade and saw him finishing up spraying Stella with fly spray and let her back out to the pasture.

Here I was promising you all that I would share my awesome homemade fly spray recipe and moments after application, Stella was covered in flies! But I had seen it work so well so many times before, why not now?! Where did I go wrong?

I started frantically grilling Bill, breaking the peace of the morning… no wait, he had already done that with his classic ’80’s hits on Pandora… which is sacrilege to do so in my not-so-humble-opinion. But I digress.

Rapid fire, I questioned him. “How long has it been in the bottle?” “Did you shake it, really well, first?” “What was the ratio of concentrate to water that you used?”

Apparently, we had run out of my mix and he had a little bit of Ecto-Phyte, you know the super expensive, $99 organic fly spray concentrate, left over from last year and had used it.

And it didn’t work.

I was real pleased with it last year, which is why I set about trying to make my own knock-off blend. I was shocked. But now that I think about it, it makes sense that it wouldn’t work.

Not only have we learned that mineral oil is very effective in fly control (and he wasn’t using it in the mix that morning), but essential oils stored in a large, clear, plastic container is sure to decrease their efficacy over time. For a small-scale homesteader, who won’t be going through it as fast, financially, it doesn’t make sense.cents.sense.

I mix our fly spray in small batches every few weeks so the oils are being stored properly in their own containers. It takes about 5 minutes to measure out, maybe less, so it’s not a big deal.

The savings make it totally worth it. Not only am I not running the risk of it weakening over the winter if I don’t use it all, but my homemade fly spray comes out to about $.36 per ounce.

So I’m saving money, staying organic, keeping obnoxious flies off my girls, and only losing a couple minutes here and there. Plus it smells good. Sounds like a win to me. 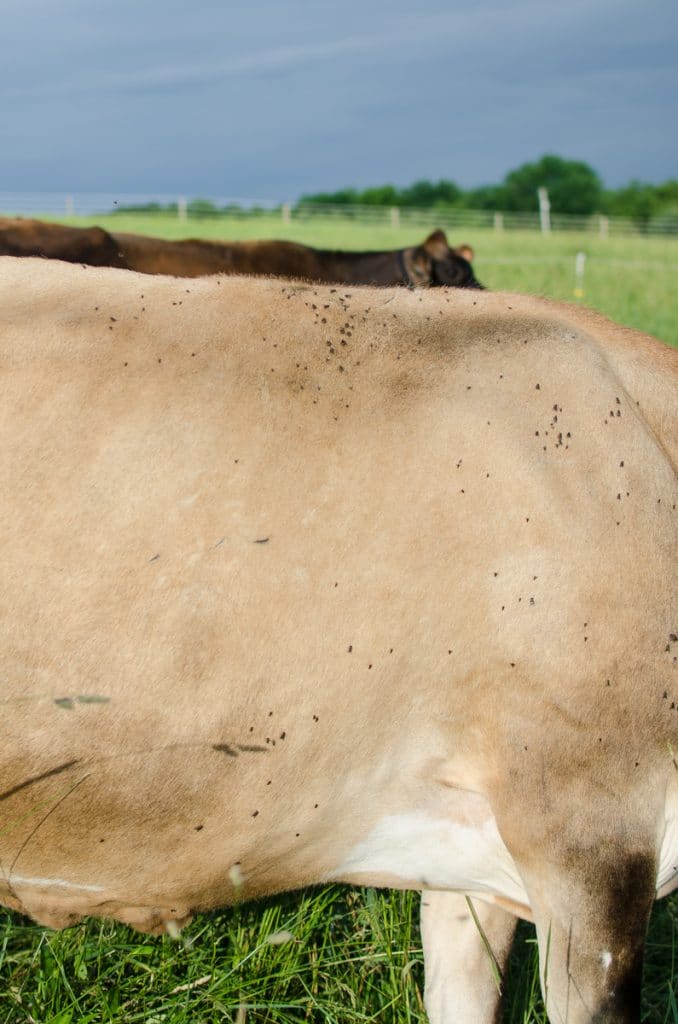 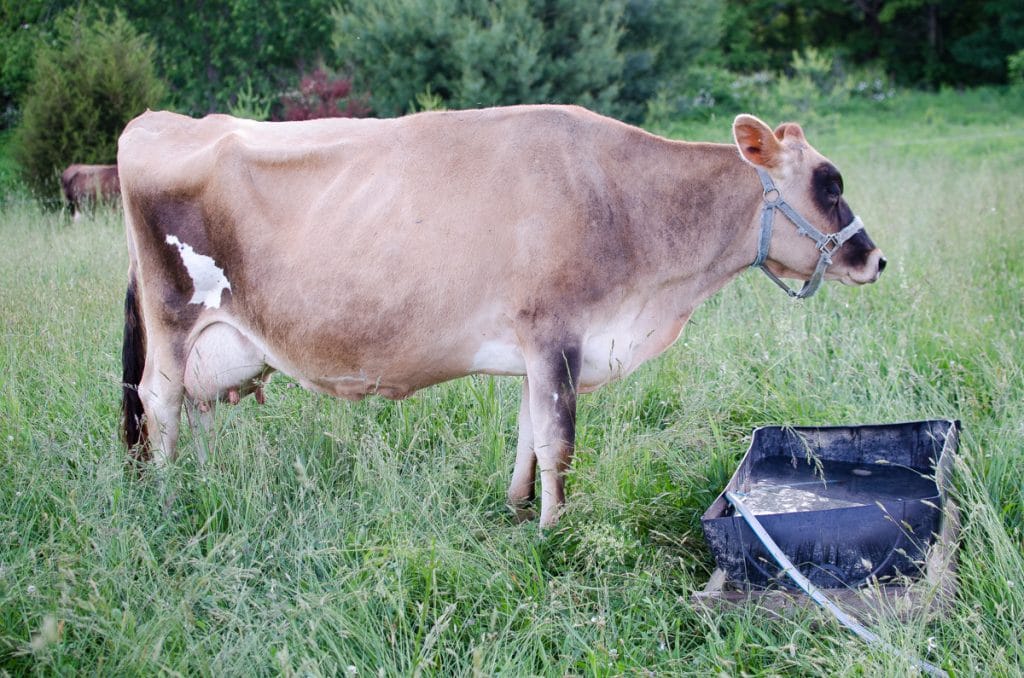 See. And it WORKS!

(I swear that’s the same cow, same day. The sky was being weird and messing with the lighting. The first shot has golden sun & the second one is cloudy. So there you go.)

A note on ingredients… while you could use other oils to help make it “stick”, we’ve talked to farmers who say that mineral oil really works the best. I don’t sweat not using raw apple cider vinegar. Cheap stuff will work just fine and that’s what I use, BUT I noticed last year that Heinz is making an apple cider flavored vinegar that really isn’t apple cider vinegar so you’ll have to watch out for that. As for the essential oils, I buy mine from Bulk Apothecary (no affiliation) and have been extremely pleased with their quality and even more so with their prices. (Seriously. You can get like 8 oz. for the price of ½ an ounce on Amazon or anywhere else.)

A note on duration… you will need to reapply this spray about once a day. You’re probably not going to find an organic solution that lasts any longer. 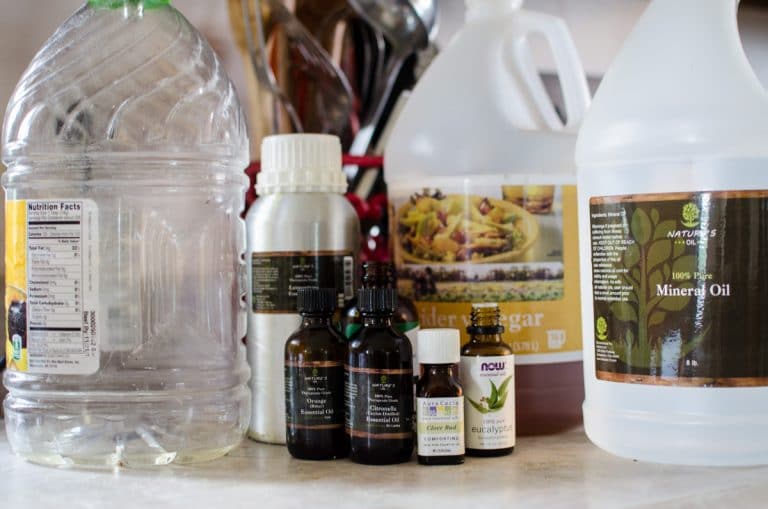 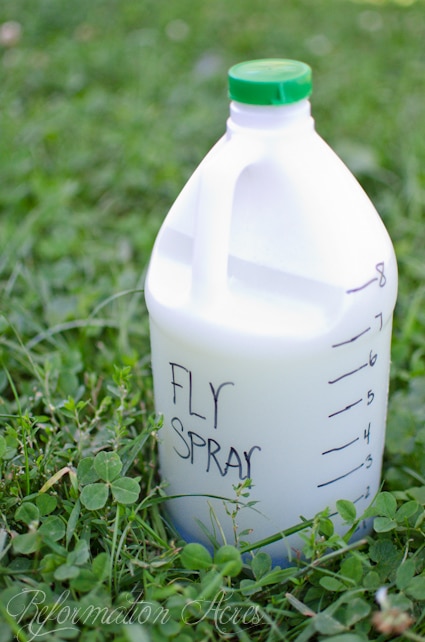 « How to Grow Peppers: 6 Tips and Tricks
5 Mudroom Ideas That You’ll Surely Love »