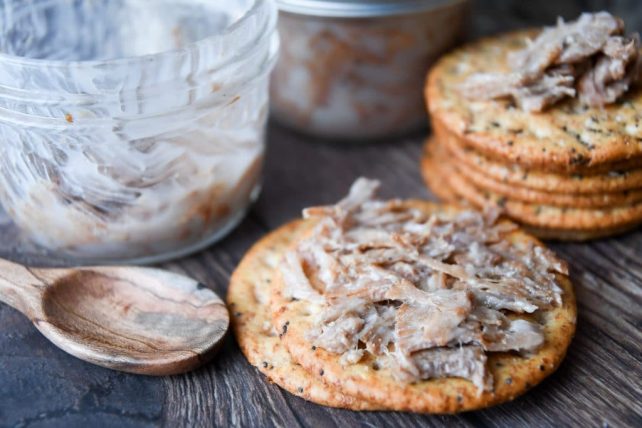 Earlier this month we wrapped up our 2nd annual Homestead Hog Butchering Workshop we host with Hand Hewn Farm. This year I tried making rillettes with a recipe I had bookmarked in The French Slow Cooker. It turned out to be an incredibly delicious and simple way to make french pork rillettes in a crockpot. (And preserve them in lard!)

(You can see a recap of last year’s workshop here.)

When we first started butchering with Doug & Andy we were slapped (not literally) with the realization that butchering season had become all about getting the meat processed and into the freezer. ASAP.

The first few years for us had an intense learning curve as we muddled through the weekend, trying to remember what we had done before. When we became more comfortable with the process, the end game was about getting it knocked out before Monday so all we had left to do was manage the curing meat (a process you simply can’t rush.)

But these guys were taking their time.

They’d stop off and talk. Or go take a piece of meat and disappear for a while and come back with a perfectly cooked sample. They would work on making little extra things like rillettes that made it about more than turning half a hog into supermarket cuts.

Over the years of butchering with them, it is surprising when I think about how much our palettes have changed and become more adventurous! Seriously, there are some crazy things I never thought I would have tried that it turns out I love!

I was thinking about the food we made this year we would have been too scared to try before. Some because of laziness, some because they are poorly named. (Like Headcheese.)

In fact, I’ve got a 5-year old in here right now with a box of crackers on her head asking me if she can have one with some of “that stuff” on it. Now you know 5-year-olds never lie. About what food they like, that is.

Whether you would try any of those things or not, you’ve got to admit, that’s all a huge jump from doing just bacon, dry cured ham, smoked kielbasa, using natural casings, and lard! (Which was the extent of our pre-Hand Hewn Farm experimentations.) 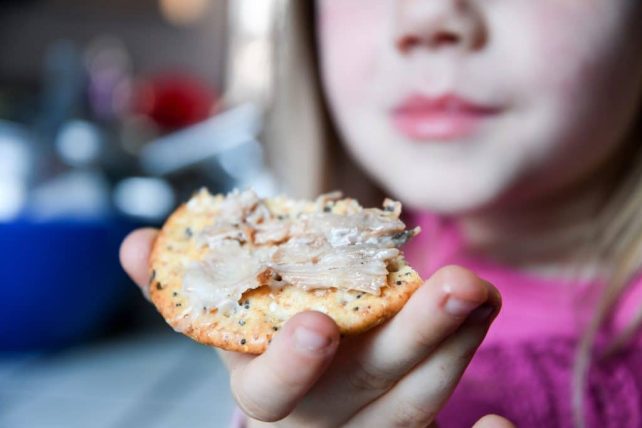 What makes pork rillettes so special?

It’s pork slowly cooked in white wine and it’s own rendered-down fat along with herbs and spices until the meat is literally falling apart it’s so tender.

On butchering day we use trimmings from the front leg or belly, but a shoulder roast cut into cubes would be perfect. Depending on how fatty your pig (or cut of pork) is you may need to add some cubes of fatback to the pot to make sure you get enough rendered lard. A little less than 3:1 ratio of meat to fat should be fine.

The meat is shredded and any un-rendered fat is “discarded.” (meaning it goes on to feed the chickens. Or dogs or cats.) It’s packed into half-pint jars then the white wine juice & melted lard-juice is ladled over the meat.

If properly covered with fat, pork rillettes should be shelf stable in a cool, dark place for up to 6 months. But you could also keep them in the fridge or freezer. Just make sure to serve them at room temperature.

This is a delicious recipe for how to make french pork rillettes in a crockpot and preserve them in lard! You can easily double or even triple this recipe!

Original Recipe Credit from The French Slow Cooker, (one of my favorite cookbooks!) 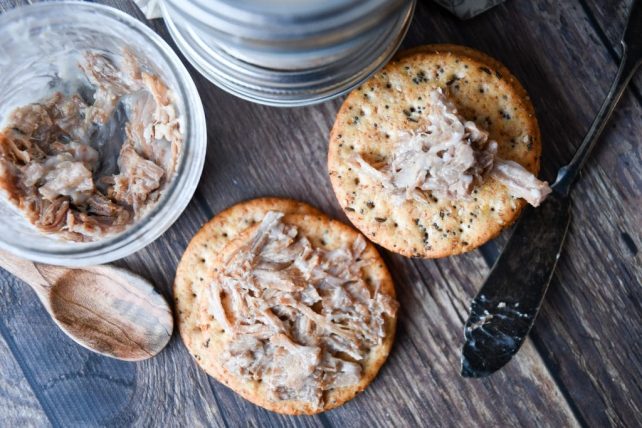