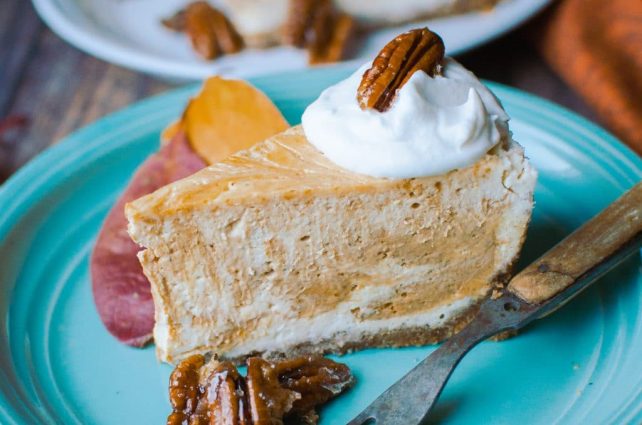 Because there aren’t enough Pumpkin Cheesecake recipes in the world, I decided last year I wanted one of my own. I’ve had tried several recipes before but none that made me want to bake it more than an easy-cheesy Pumpkin or Butternut Squash Pie or the standard Chocolate Vanilla Swirl Cheesecake I normally love to make. I’m a simple gal and don’t want a stash of recipes I’m never going to make. That is until this Pumpkin Swirl Cheesecake recipe!

After working on a recipe over the last two pumpkin seasons, I finally nailed it! I’ve got a Pumpkin Swirl Cheesecake recipe that my whole family is raving about… and actually asking me to bake for Thanksgiving instead of the Chocolate Vanilla Swirl Cheesecake! I never saw that one coming!

What makes us so picky about my Pumpkin Cheesecake? First, I’ve had a terrible time at getting consistent baking results using pumpkin. The pumpkin adds a lot of moisture to the cheesecake and there is a big difference between a creamy cheesecake and a slimy one. Creamy=good. Slimy=baaad.

But you don’t want to overcook it trying to de-slime the center. Cause then the exterior is going to overcook. Know what happens then? CRACKS!!!

When my cheesecake cracks I want to know that it’s cause I’m baking in a cranky old circa 1983 oven while I’m holed up in an equally aged single wide trailer while we build a house in the front yard. A temperamental circa 1983 oven that is overheating anywhere from 5-25 degrees on a whim. I’ll give it this much: It still works. (In theory.) I can’t get a modern oven to last me more than 5 years without completely falling apart. (I’m hard on appliances. And vacuum cleaners.) So the fact that I can still get this thing to even turn on 30+ years later blows my mind.

What were we talking about? Oh yeah… the failings of every other Pumpkin Cheesecake recipe I’ve tried to bake.

First, the texture wasn’t right. Second, the flavor just never knocked my socks off. Somehow they all tasted artificially flavored. Like a pumpkin pie dressed up as a cheesecake. Or a cheesecake stepping into the shoes of pumpkin pie. And neither really belonged. For a while, it seemed best that they both be content the way they were created… not try to be something they were not.  A few tried so hard and were so cloyingly sweet & spiced they made me want to gag. I certainly came to the conclusion that ground cloves do NOT work. Even a pinch. They definitely were a costume party pooper.

Ultimately, I wanted a cheesecake that could show up to the party as itself…. a dessert that could stand in its own shoes and proudly own it’s Pumpkin Cheesecakieness.

I found the perfect cheesecake in a swirl.

For some reason keeping two distinct flavor layers swirling together in harmony allows the cheesecake to maintain traditional flavors that blend perfectly. The result is a cheesecake that works very well served as it is but can be dressed up with some freshly whipped cream or Ginger Candied Pecans (recipe below) or even a drizzle of Maple Caramel Sauce without being overpoweringly sweet or rich.

Baking a Pumpkin Swirl Cheesecake is relatively easy! (Which goes for all cheesecakes.) It’s definitely not something that should intimidate you! It’s simply a matter of beating the cream cheese and sugar together, adding the eggs one at a time, and then beating in the vanilla and sour cream. Using a stand mixer it literally takes 3-4 minutes. With a Pumpkin Swirl Cheesecake, you have to go the extra step of stirring up the pumpkin mixture (a great job for little children!) and then layering it into the pan and swirling it.

Sadly, making a cheesecake isn’t quite as simply as say a Creamy Cherry Clafoutis. But the most difficult part of cheesecake-baking are the little steps you take to ensure the cake bakes well and stays crack-free. Here are my best cheesecake baking tips!

Simmering the pumpkin for a few minutes (or longer if you’re using homegrown pumpkin puree which tends to be more watery) removes excess moisture from the pumpkin and reduces baking time. Cool it completely before adding the cream cheese to the mix.

When you bake any cheesecake, use ingredients that have all come up to room temperature to get a silky smooth batter with no bitty cream cheese chunks.

Bake it in a Waterbath

In our quest for a crack-free cheesecake, using a waterbath will make it bake evenly. That way you don’t have to bake it longer trying to get the center to set when the outside edges and top are already done baking.

The trouble when baking a cheesecake in a waterbath is the water will leak through the cracks in your springform pan. That makes for a nasty soggy crust. The solution? Wrap the outside of the pan in not one, not two, but three layers of heavy-duty aluminum foil. Folding it up over the edges of the pan and crimping it tightly just on the inside will prevent water and steam from getting inside and breaching the pan and infiltrating the crust.

The goal is to bake the cheesecake until it is just set. That means when you give it the slightest easy and gently giggle the center isn’t still liquid but isn’t solid either. When you cool it slowly from that point, it will continue to bake further but so slowly that a drastic temperature change won’t cause cracks. I bake my cheesecakes at night so that when it’s done I can turn off the oven and open the door. It will be room temperature in the morning and ready for the refrigerator.

Cook Down the Pumpkin 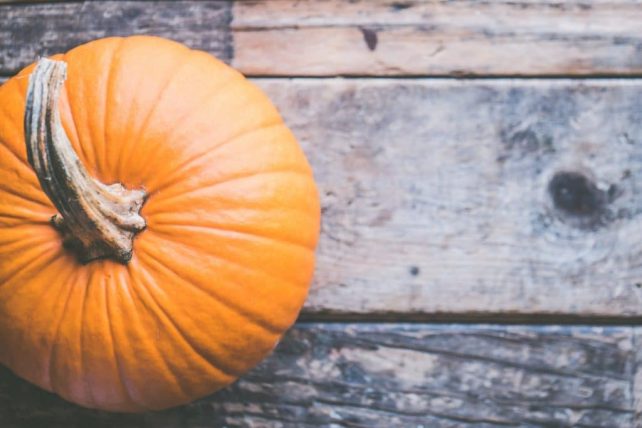