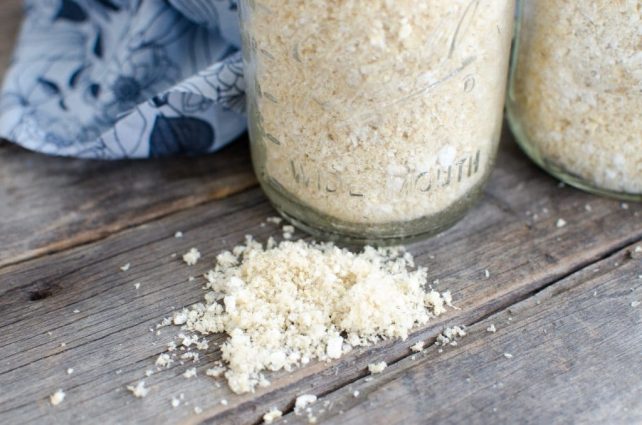 There’s no easy way to say this so I’m not going to beat around the bush. I’m going to show you how to make gluten-free panko bread crumbs recipe… with pork rinds. And I’m not talking about the junk you get in a loud crinkly bag from the snack food aisle at the grocery store. I’m talking with honest-to-goodness real pork rinds made from the skin of a pig. Which I think makes them not bread crumbs, but they look and taste just the same so we’ll run with it. 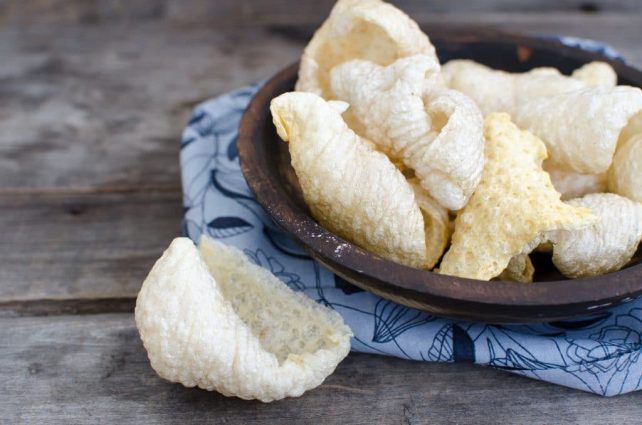 Why You Should Use the Skin

Now that idea may be a little off putting to some (or completely awesome to others) but let me tell you why you should give it a try, especially if you’re raising your own pork, which many of us homesteaders do. If you don’t learn ways to use the skin of the hog you raised, what are you going to do with it? Well, I know we used to bury it in the pasture and hope that a dog didn’t find it, dig it up, and roll in it. When our butchering practices evolved to reduce our waste and thereby show the animal we raised a higher level of respect for its life, we stopped skinning the pork.

Quick Tip: Discover how changes like butchering your own meat or learning to cook the more unusual cuts can increase your yields and savings with the SmartSteader homestead management app! Keeping homesteading records allows you to use real numbers to determine how well improving your skills and knowledge is paying off!

This was a big change on butchering day but it allowed us to not only work with the cuts more easily, but also increase the diversity of ways to preserve it. Now the world of cured pork is open before us because the skin naturally provides protection and preservation during the curing process.

But not all cuts of meat need the skin left on after you separate them. So what do you do with that skin?

Making pork rinds is a great solution! Homemade snack food with endless seasoning possibilities! (My kids like the cinnamon sugar pork rinds the best, but they’re happy to eat them plain!) But if you take making homemade pork rinds just one easy step further, you end up with the most amazing gluten-free, non-GMO (presuming you used non-GMO feed), homemade bread crumbs with the light, airy texture of panko bread crumbs (which can’t be made at home.) This special powdered pork rind breadcrumb is more commonly called by the magically fanciful name of Pork Dust.

And a little goes a long way. About a 1 pound pack of skin makes enough Pork Dust to fill about ½ gallon mason jar and maybe then some. It’s great to use anywhere you would use bread crumbs or panko bread crumbs. Fried Chicken or Pork Chops, Breaded Zucchini, Chicken Fried Steak, Fried Mozzarella Sticks, Crab Cakes…

Heck, I’d like really to try it on Fried Ice Cream!

The process for making Pork Rinds takes a long time, but most of it is passive until the end. But that’s the fun part where the real magic happens! In a nutshell, you’re basically checking to make sure as much fat has been removed from the skin as possible and cutting it into manageable sized chunks. After that you’ll boil the pieces of skin for a couple hours, completely dehydrate the pieces, then fry them in hot lard to puff them up. You can season them and eat them for a snack or resist the temptation and once they’ve cooled, grind them up in a food processor until they make crumbs.