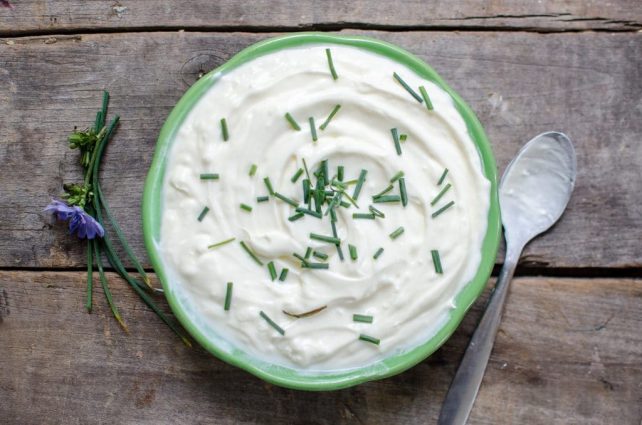 I find it amusing as I think back to the dairy products I’ve learned to make over the years since having our first dairy cow. I started with the things I like the most and slowed my pace over the years until I gradually add in the skills of making things I don’t care for as much… like sour cream. Normally, there is a lot of trial and error and since I don’t really like eating sour cream, why would I want to keep sampling it? Though I have lots of volunteers, I like to know for myself when I’ve nailed it.

This summer I finally bit the bullet and learned to make sour cream. And found it was really so easy, I don’t know why I’ve been putting it off! In my research, I learned there are actually 4 ways you can make it at home. I tend to prefer the second or third way, but I usually am bad at stocking cultures so the second way to make sour cream is the winner for me! And it turns out that I actually like it quite a bit before it sours too much. 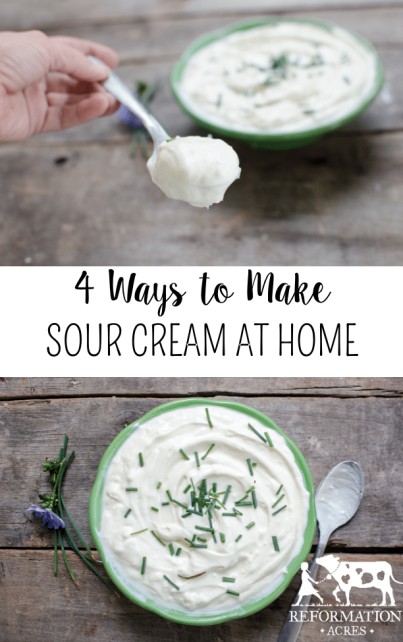 How to Make Homemade Sour Cream

Tradition folks. It has its virtues. Skim cream from off your milk and set it on the counter, allowing it to culture and sour. This sour cream will be loaded with nutritional and natural probiotics.

Learn how I skim cream the easy, cheap, and hands-free way.

The drawback to souring cream this way is that it has many variables and can be inconsistent. Variations in milk flavor, air temperature, etc. can all play into how your sour cream turns out. It reminds me of capturing wild yeast for sourdough. Sometimes it turns out amazing and sometimes it doesn’t, but you can’t always rely on fairly consistent results.

Check out my Essential Guide to Raw Milk plus a ton or raw milk recipes!

Culture with Other Dairy Products

You can make the sour cream by culturing your milk with other cultured dairy products, like sour cream, buttermilk, or milk kefir.

I tend not to measure much when doing this, it’s pretty forgiving and flexible. I find that the more culture you use, the faster (and thicker) it will set up. Generally, you can scoop out a couple heaping tablespoons per cup of cream.

When I have used actual, cultured sour cream from the grocery store to culture my own, I find that it turns out fairly mild and more like creme fraiche at first, but it is delightfully thick. I actually prefer it this way since I’m not a big fan of using sour cream as a garnish. Let it keep going if it’s not sour enough for you. It’ll get there.

Vigorously whisk the sour cream “starter” into the cream and place it in a jar, set out on the counter for a day or two until it has thickened. Refrigerate. It will continue to sour over time.

This is the same method I use to culture my own homemade buttermilk. 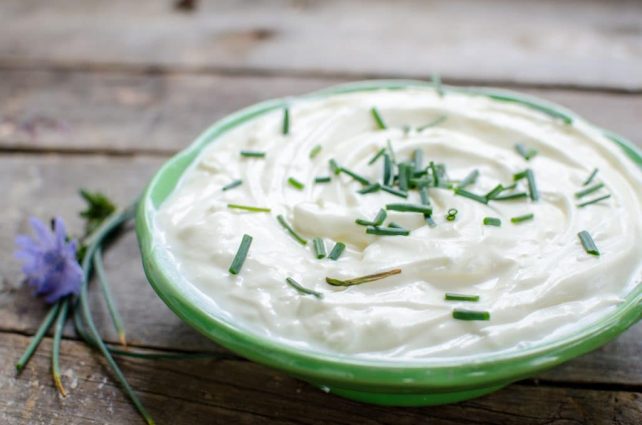 This is the most “expensive” way to make sour cream at home. The cost is still negligible, especially considering this way produces reliable results and flavor. I think it’s good to know how to make sour cream in a pinch with the other methods, but I prefer knowing what the outcome is going to be each time I culture dairy. Directions vary by the source of the culture. Just remember, if you are using raw milk and heat it above 100 degrees to culture it, many of the benefits of the milk are lost and technically, while not pasteurized, it is no longer in it’s pure, raw state. I don’t worry about the trade-off, especially when the culture has probiotics. The way I look at it is, if I want the benefits from raw milk, I’ll drink a glass and when I want the benefits from a cultured milk product, I eat them. I’m still getting a healthy food into my body either way.

Quick Sour with an Acid

What you save in time, you lose in nutrition. This will act and maybe even taste like sour cream, but there are no probiotic goodies with this method.

Whisk the acid into the cream and let it sit in a jar for a day before refrigerating.

How long does homemade sour cream last in the fridge? Typically, about a week, but if it happens to still be around after that time frame and hasn’t gotten moldy and smells ok, we’ll still use it.

What is your favorite way to eat sour cream?