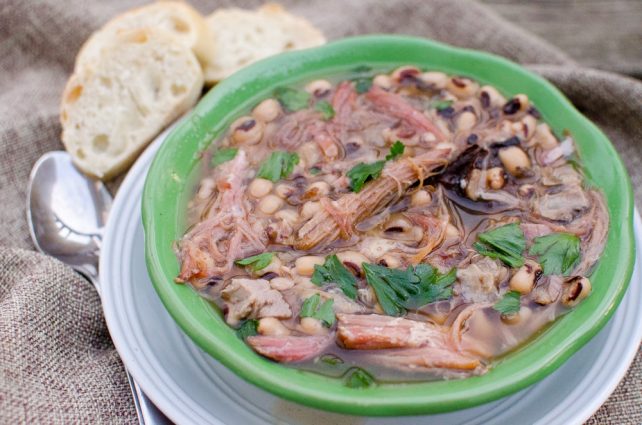 Tender, smoky, and salty ham falls off the bone when you make Ham Hock Soup. Black Eyed Peas soak up the flavor of the perfectly seasoned rich broth. Grab a slice of crusty bread to soak up every last drop!

This time we were doing a massive fall yard clean-up. While I was painting some exterior doors and the grass was getting mown one last time on top of it all dinner was overlooked. Happens all the time. (The overlooking dinner part. Cleaning up the yard, not so much. Which is why it was such a big task. That and the 7 kids doing the mess making makes the mess that much messier.)

Therefore when 5’oclock rolled around, I knew it was either going to be throwing together another pasta dish or busting out the Instant Pot to make the Ham Hock Soup I had promised 2 nights in a row and was about to fail at delivering on… again.

The Instant Pot is one of those things that I never expect to work out. It defies everything I know about making really good food. What? I can throw this squash in there with a bit of water and it will be done in 7 minutes when it would take 45 minutes in the oven? Yeah, right.  I get so excited every time I turn the lid and lift it off. It works! (It’s the simple things, what can I say?) And when it comes to soup, I know that slow and low is where the flavor happens. And yet, though I was nervous that it could possibly turn out right. I was once again impressed.

In less than an hour, we were eating. And we still had enough daylight left to eat outdoors (probably for the last time this year.) 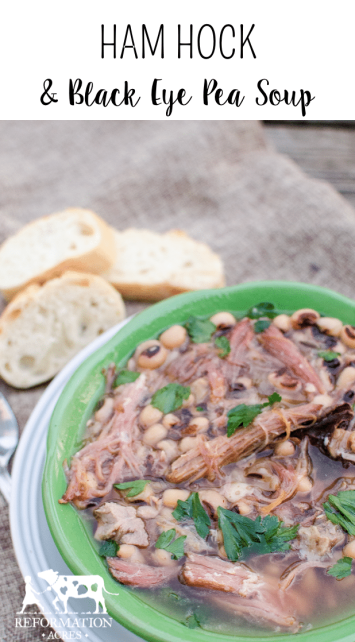 The meat in the Ham Hock Soup was just as tender, the beans and broth just as intensely flavorful as if it had been on the stovetop all afternoon. And let me tell you… the flavor is so amazing! It’s the sort of soup that makes one (me) willing to concede to the closing of the warm months in exchange for a nasty biting cold that sucks your breath away. At least there’s soup at the end of the day.

Now, you don’t need to use a ham hock in Ham Hock Soup. I know. It doesn’t make any sense. But a small ham will work just as well and get you more meat in your bowl. Because there are so many of us, I will usually put in 1-2 hocks and one small boneless ham. That way we get to have this soup at least 4 times over the winter before we run out of hocks.

That’s one of the things I appreciate about butchering our own meat. Some folks don’t realize it, but when you raise and butcher your own meat, you learn to stretch it further and make it last from year to year.

We actually consume less meat because we don’t just run to the store whenever we need meat for dinner.

When you’re out, you’re out and when it comes to things like bacon, raising your own meat is part of our sanctification because it really takes a lot of patience (and counting down… 36 days) to make it till the next harvest date + curing & smoking time. There are actually 7 good reasons to butcher your own meat, this is just one of them.  And if you learn how to cure & smoke your own ham as well, you’re going to know a fullness of satisfaction like no other when you dip your spoon in your bowl of Ham Hock Soup.

Probably no finer way to dine. 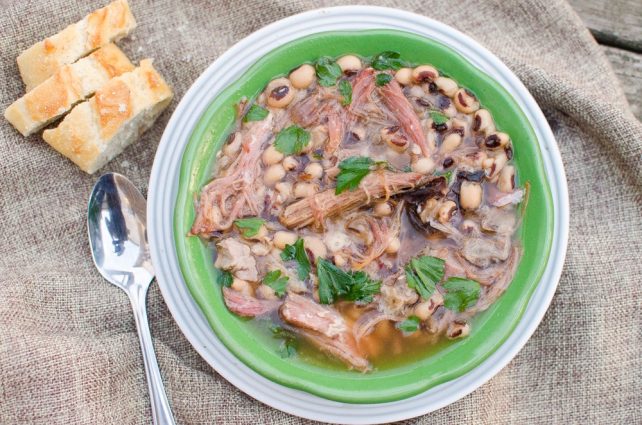 Tender, smoky, and salty ham falls off the bone when you make Ham Hock Soup. Black Eyed Peas soak up the flavor of the perfectly seasoned rich broth. Grab a slice of crusty bread to soak up every last drop!