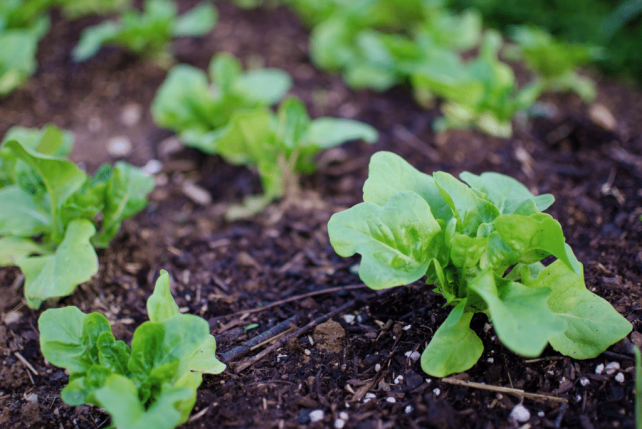 Garden fresh is best! Right? Even fresh isn’t good enough if the unhealthy plant is producing unhealthy produce. Use these 6 Garden Tips for the HEALTHIEST Garden Produce!

Yesterday Bill and I spent a good portion of the day in the tomato patch pulling up tomato plants and interplanted basil. Our first frost will be any night now and I have more than enough tomatoes put up so I harvested the last bushel this week and called it.

After I pulled about ten plants, I called him over and hung the tomato plant upside down in the air. I asked him if he noticed anything. He wasn’t sure where I was going with it at first, he wanted to get the right answer, and it seemed like I was must be directing his attention to the soil caked roots since they were inverted into the air. Finally, he said, “The roots suck,” in an almost questioning way.

Yeah, that’s exactly what I was going for. The roots on these things sucked!

See, this year, we grew a lot differently from what we normally do.  The first gardening book I ever read was Gardening When it Counts. In it, Steve Solomon, founder of Territorial Seed Company, spoke at length about plant root systems and how we should be spacing plants according to their needs. Since then, my tomato plants were normally spaced a generous 5 feet apart and when I pulled up their roots in the fall, I could hang them at my head level and have them trailing across the ground. And that was in a no-till garden!

This year, we used a tiller to shape raised beds in 100′ rows and planted intensively. I couldn’t bring myself to do the 9-12″ recommended spacing for tomatoes and opted for 18″ instead. The root systems? Three feet on the best plants! That’s about half as large as what we’re used to seeing… AND it was in a tilled bed with nice loose soil.

Those roots spoke to me loud and they spoke to me clear. And do you know what they told me? They told me my tomatoes didn’t go far trying to find the nutrients needed to grow and thrive. Thankfully, we had heavily amended the soil in the spring and that helped us bring in a satisfactory harvest, but this year we had an unbelievable amount of pest pressure the likes of which I’ve never seen before. The entire top quarter of each row of tomatoes was skeletonized by tomato hornworms. (See photo later in the post.) In a normal year, I’ll see one, maybe two hornworms, at best. Often we’ll have growing seasons with not a hornworm in sight.

Since I believe that the health of the plant is often diagnosed by the pest pressure it experiences, when I was walking up the path to the first tomato plant that I would pull yesterday, I had already theorized that I would find a small root system. And I hate to say it, but I was right.

From the Cucumber Beetles, to Squash Bugs,  Mexican Bean Beetles, Cabbage Worms, the Tomato Hornworms, and Flea Beetles, my pest load was crazy this year! We’re talking plague proportions. It seemed that in some cases, such as the Flea Beetles, they weren’t even behaving normally. Preferring cooler weather, I usually stop seeing Flea Beetles by the time the potatoes flower, but this year they held on strong all season long! 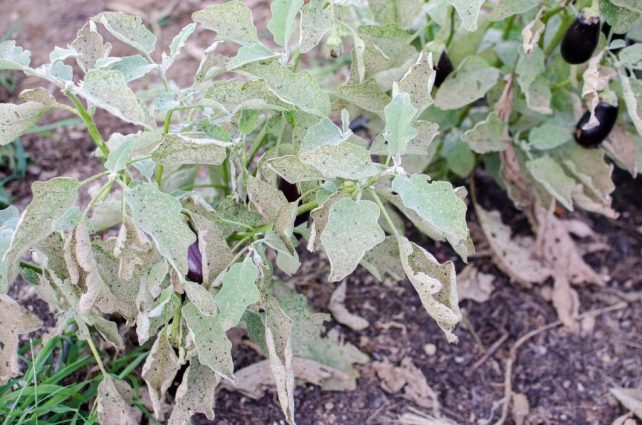 I spent the season telling myself it was the warm winter. We never have such beautiful winters (we even had firewood left over last spring) and I was certain that’s all it was. And while that may have been part of the problem, I am increasingly convinced that intensive spacing made a contribution to our problems. And I could kick myself for not listening to my gardening instincts!

So yes, it is possible to space your plants closer together and eek out a greater yield from the land. The question is, “Should you?” As homesteaders and land stewards these are questions we should be considering.

Besides the obvious disease and pest pressure you might face, why is it so important to make sure that your plants have enough nutrition from the soil to meet their needs? Because a nutritious soil feeds a nutritious plant, which makes the healthiest vegetables possible, that you, in turn, feed to your family’s bodies, making you all the healthiest you can be. It’s not just good enough to eat an organic apple. If it is depleted of nutrition, the calories are just as empty as an organic candy bar. That’s one reason why freshest is best..est. (Flavor is another.) But even fresh isn’t good enough if the unhealthy plant is producing unhealthy produce. 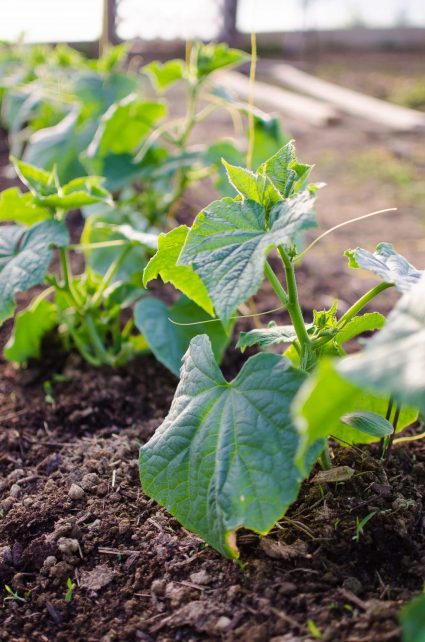 So if you been thinking about growing your next garden intensively, here are my best garden tips so that you can still get the most nutritionally dense produce possible.

Is this a new garden plot? Or has it been used year after year after year to produce crops in the past? Do you already have a thick layer of beautiful top soil? If so, lucky you. If the earth is rich and has not been exhausted, you may consider growing intensively, replacing the nutrients that the plants remove each year. When we moved here, the land had already been used for growing crops for over a decade. We’ve been managing and amending the plots to make sure that each area has now had a rest in the last 3 years. Changing our model this year was foolish and though I appreciated the raised beds and efficiency of the rows more than I thought I would, I won’t be growing intensively going forward on our site until we see more improvements.

Before you grow any crops, it’s always a good idea to test your soil and get a baseline for what it’s nutritional needs will be. You can’t properly amend your soil if you don’t know what to add in the proper amounts. In fact, adding too much of one amendment is just as bad as not having enough. Adding too much lime to your garden, for example, can bind up your soils like clay, giving your roots no room to grow, no air to breathe, and makes it nearly impossible for the soil biology to migrate nutrients through the soil.

This is maybe the most important gardening tip I’m sharing! Extreme deficiencies will need to be balanced, but especially if you plan to grow intensively. It’s a really good idea to consult your local ag extension for amendment recommendations.  The Intelligent Gardener is an excellent and extremely resource to help understand why balancing your soil is so important, details on specific nutrients, and information about how to calculate your amendment needs. 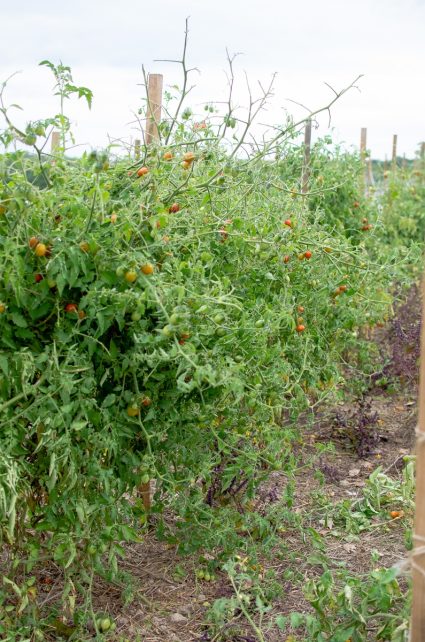 Fertilize Throughout the Season

Do your homework. Some plants will be fine with a boost from foliar sprays such as compost tea, fish emulsion (opt for cold-pressed and super stinky), or seaweed extract, but some such as tomatoes, peppers, and squash will also appreciate some calcium to prevent common late season problems such as blossom end rot.

Intensive, close-spaced vegetable growing, might be a better option in the homestead garden for light feeding plants. (Radishes, Lettuce, any Greens including Kale and Swiss Chard, Green Beans, Carrots,  and Peas.) Then give the heavy feeders their space. Tomatoes, Peppers, Brassicas, Cucumbers, Eggplant, Garlic, Melons, Onions, and Squash are all examples of heavy feeders.

Start Your Compost for Two Years From Now TODAY

I can’t speak to all compost manufacturers everywhere. All I can tell you is that the ones whose tests we looked at here were junk. High C:N ratios, some even with little available nitrogen. That tells me they’re selling it too soon before it’s done composting. We purchased the best one we could find this year and even it was loaded with bark. It was closer to bark mulch than compost and sat right off our driveway cooking away this summer. We have a couple tractor bucket loads left and it’s looking so much better even after a few extra months.

If you plan to make your own compost, I would advise building your pile this year for the gardens you want to use it on 18 months-2 years from now… when it is fully composted.

If you plan to buy in your compost next year, I’d buy it now, tarp it with heavy black plastic (like this one), and let it keep breaking down before you use it in the spring. If it is heavy on the bark mulch, I would also add some old hay or other “green” materials. Another tip, I learned from The Intelligent Gardener would be to layer your compost with alfalfa meal to help it break down more quickly.

One final thing to consider: to do it well, growing intensively will be more expensive. Whether it’s to keep the soil balanced or to combat the pest & disease pressure and keep the weeds under control, it will cost more to keep your plot maintaining a satisfactory level of production.

Market gardeners who use intensive spacing all have high inputs of compost and amendments. They bring these to their plots to make their high yields possible. (Unless you have a large source of animal manure to compost, you’re going to have to buy it in.) They are able to purchase bulk quantities of insect netting and hoops. Many will choose the less labor-intensive pest management techniques and utilize organic sprays.

But for those of us more concerned with avoiding all chemicals, organic or otherwise, who are growing for nutrient density, and don’t have to factor in the bottom line, spacing our plants out and giving them the room to grow that they need may make more sense.

Have you tried growing intensively? What are your best garden tips?