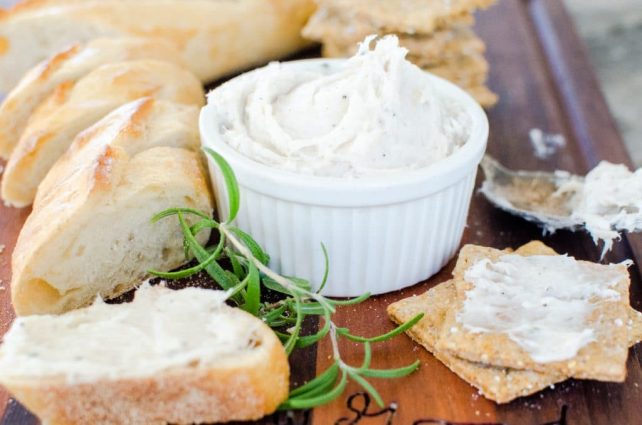 This winter when Bill came home from the third class of the Homestead Hog Butchering workshop where he was learning the principles and techniques of preparing and curing pork known as charcuterie, he was raving all about this one thing they had made… and he called it pork butter.

Frankly, he had me at “butter.” And the only thing that it sounded like pork butter was missing was a little bit of crumbled bacon to make it complete, but naturally, with bacon taking a lot longer to cure than the 2 days since the butchery began, it doesn’t really make sense to add it in. Unless you are a better person than I am and can somehow make 22 pounds of bacon last from one year to the next. Maybe you are, but I haven’t managed to have it happen. Let’s be honest though, I haven’t tried too hard.

But that’s enough about bacon. I’m here today to talk to you about butter.

Pork butter to be exact.

Bill had tried his pork butter schmeared, yes I said schmeared and it schmeared it must be, all over what was I am told a phenomenal crusty sourdough bread. And since it is currently Harvest Season and since that means my sourdough is dead as a dog with 3″ of tar-black hooch on top, I wasn’t feeling like my first sampling of pork butter was going to go well on the store-bought baguette I was forced to use instead.

Though I tried it on the bread anyway, my gut was telling me, calling me, to a cracked black pepper cracker that I had never even eaten before. I followed my gut around the kitchen, pen and paper in hand making notes, going to the pantry for a handful of rye berries to grind in the coffee & spice grinder, mixed it with some flour, salt, a little fat, and a generous bit of black pepper.

I mixed and rolled and cut and baked and barely cooled those rustic beauties before I schmeared, yes I said schmeared, them with a spoonful of pork butter I made while they had been baking.

And then I thought my taste buds would burst with all of the goodness happening inside my mouth!

Now at this point you’re probably wondering what on earth this pork butter actually is… and I almost don’t want to tell you until after you’ve tried it for fear you’ll discount it as something that can’t possibly be good, but let me tell you first that if and when you do the discounting, you will be missing out in a big way. 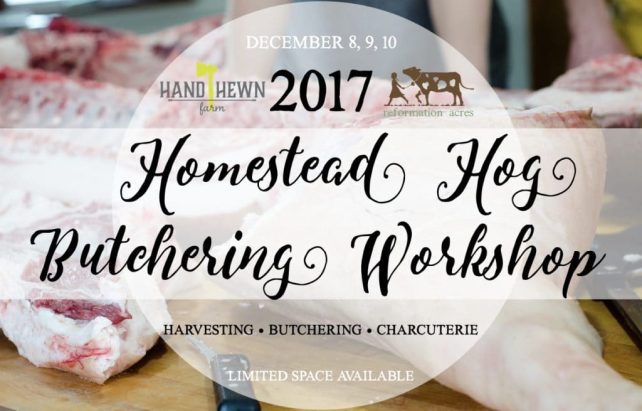 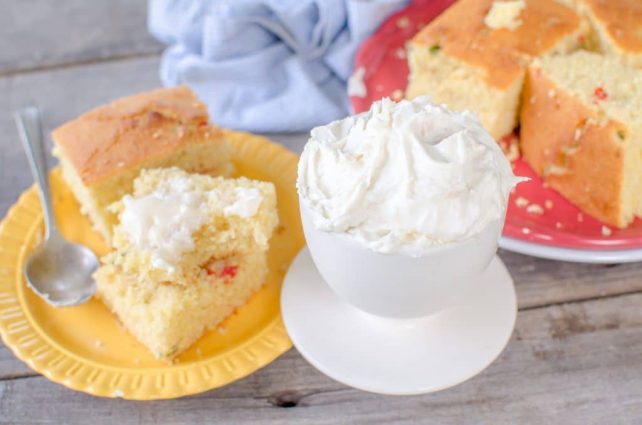 If you find yourself on that less adventurous side of life, perhaps you should break yourself in on a Honey-Sweetened Pork Butter, preferably on Jalapeño Cornbread. Because sometimes sweet things are more of an incentive to be adventurous. At least they are for me, but I’ve got a sweet tooth like an elephant tusk. (It’s quite unbecoming- why do you think I never show my face?) I used my cornbread recipe, mixed in some diced, roasted jalapeños, and baked it in my favorite skillet for 30 minutes. So good!

And I wasn’t sure that the savory version could be better, but it was. Even the kids had it polished and gone pretty quickly. (Though they preferred the pork butter on bread because they thought the crackers were too spicy.)

Enough beating around the bush. I suppose it’s time to tell you that Pork Butter is more commonly called “Whipped Lardo.” Now I try to discourage verbal abuse, I don’t even like to call my spreads ugly names and so can we all agree that Pork Butter is a more kind way to call such a thing a beauty?

But even “Lardo” doesn’t tell you that what we’re talking about is unrendered pork fat, typically cured (but for this recipe doesn’t have to be), that has been ground or otherwise made into tiny pieces and whipped until it’s smooth along with a handful of other flavorful additions- sweated onions, minced garlic, red wine vinegar, minced rosemary, sea salt, and a crack of black pepper. It’s pretty much a compound butter except it’s made with whipped lard instead of butter. (In fact, Pork Butter might just be worth trying in any of those combinations of herbs preserved in butter!)

Don’t knock it until you’ve tried it. And certainly don’t call it nasty names like “Lardo.”

I’m thinking Pork Butter might be mighty fine with a minced chili pepper mixed in, or better yet Zesty Pickled Jalapeno Relish! I still think the aforementioned crumbled bacon would be mighty fine and let’s not forget layering it in next time you make bruschetta.

And I think you should come to our Butchering Workshop and make some with me this winter! 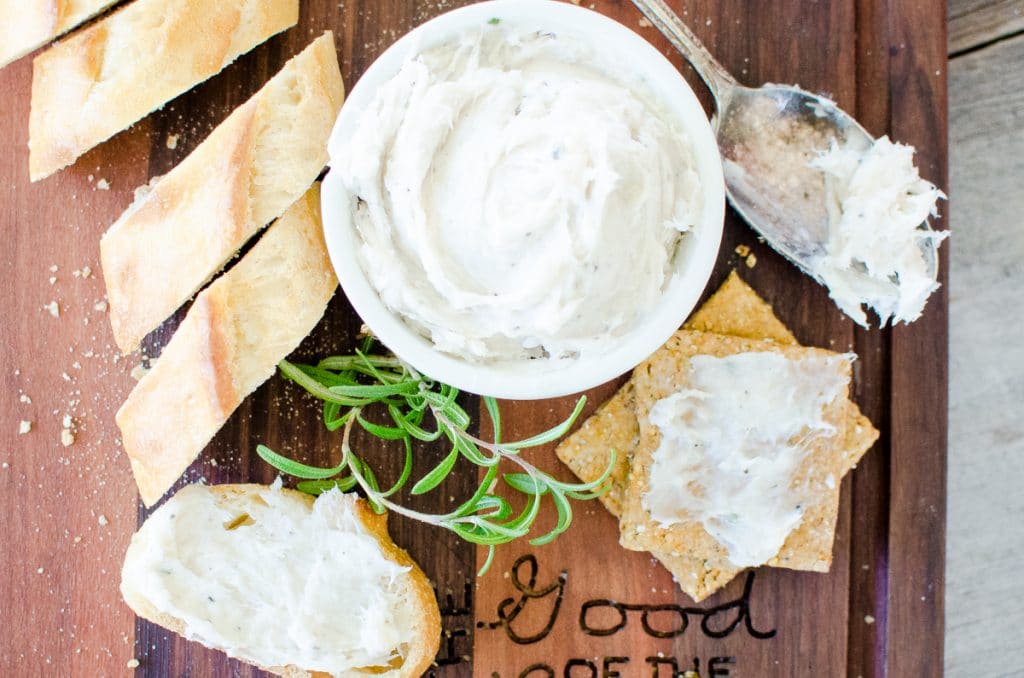 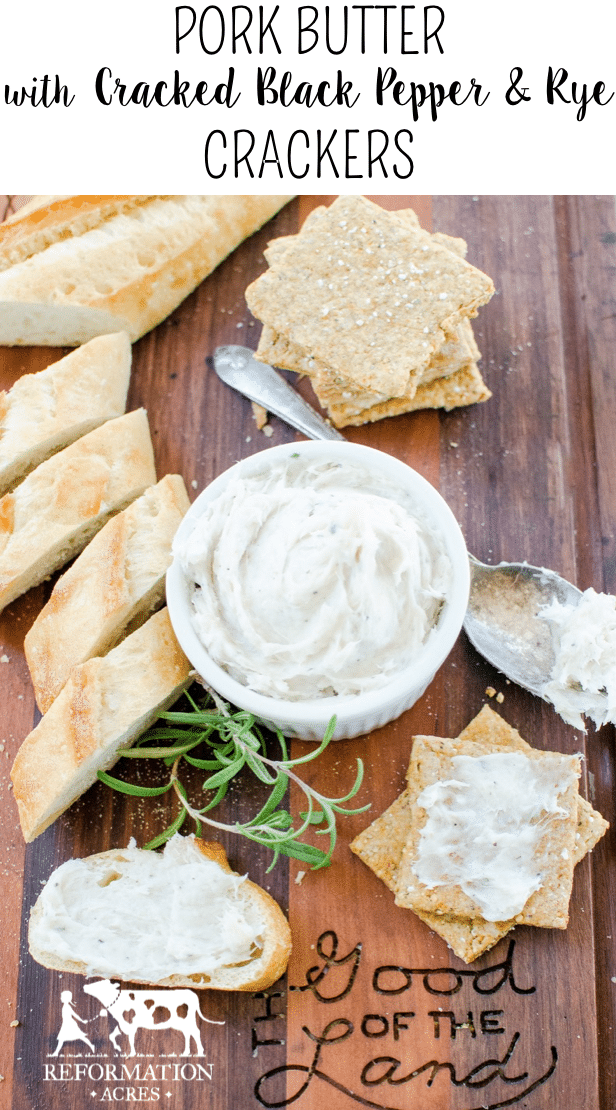 Living the adventurous life and boy is it delicious,