Rhubarb BBQ Sauce is sweetened by natural sorghum with a chipotle pepper to give it a kick in the pants. Now there’s no excuse to use store bought sauce again.

I don’t know how the bee got in my bonnet, but as I looked over the last of the remaining store-bought condiments in my fridge last summer, I decided that I was going to tackle a homemade BBQ sauce until I perfected a recipe that met with the approval of everyone in my home.

I wanted one that was the perfect balance of spice and sweetness to appeal to my husband (spice) and children (sweetness). Our friends had gifted us with a bottle of sorghum BBQ sauce the year before and it was really quite good and so I was hoping to find a knockoff. Memories of flavors faded over the months so I’m not sure that what I came up with was anything the same, but it was delicious none the less.

Early in the grilling season, I made a Sorghum and Roasted Rhubarb BBQ Sauce with garden fresh rhubarb, something that we could always use a few recipes for. It turned out to be just one more reason, besides Rhubarb Butter, that I was thankful we didn’t plow over the rhubarb the first year in our new home!

Later in the year, I decided I also wanted a more tomato based sauce with a natural smoky flavor (no liquid smoke please.) Both are very good and last a surprisingly long time in the fridge without preservation. Mine was good several months later, in fact!

If you have a patch of rhubarb and haven’t been sure what to do with it, you should give this recipe a try! 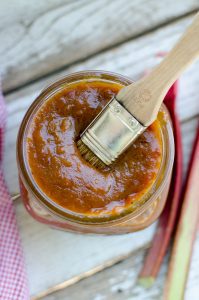 Rhubarb BBQ Sauce is sweetened by natural sorghum with a chipotle pepper to give it a kick in the pants, there’s no excuse to use store bought sauce again.