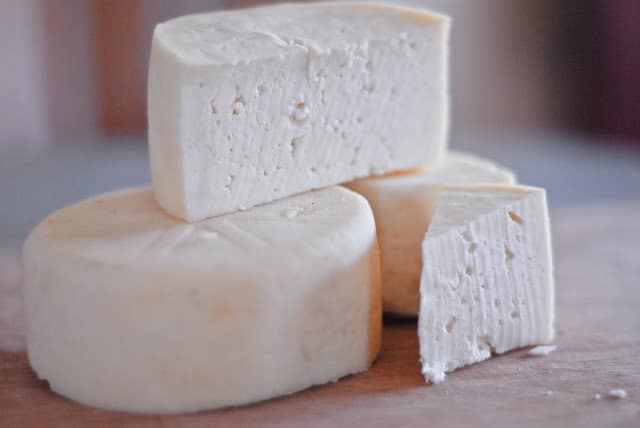 Are there GMO’s in cheese? The truth of what might be in the rennet you use to make homemade cheese might surprise you. I know it sure shocked me!

I don’t know about you, but we put a great deal of effort and expense into avoiding genetically modified ingredients. We raise & butcher 99.5% of our families meat, purchase heirloom seeds for our garden, and avoid convenience foods.

There are lots of reasons we do all this work. Not the least of which is to make sure we’re avoiding as many GMO’s  as possible. It never occurred to me there may be GMO’s in the rennet I use to make cheese.

I’m not one to engage in fear-mongering. But when it comes to the safety of GMO’s, I believe the jury is still out. I’m not convinced they are safe for our bodies to ingest. The fact is, there have been no long-term, generational studies done on people. I can’t simply trust those with an agenda in getting me to believe they’re safe. I’m responsible for caring for these children’s bodies while they’re with me. And I’m not about to make guinea pigs out of them. 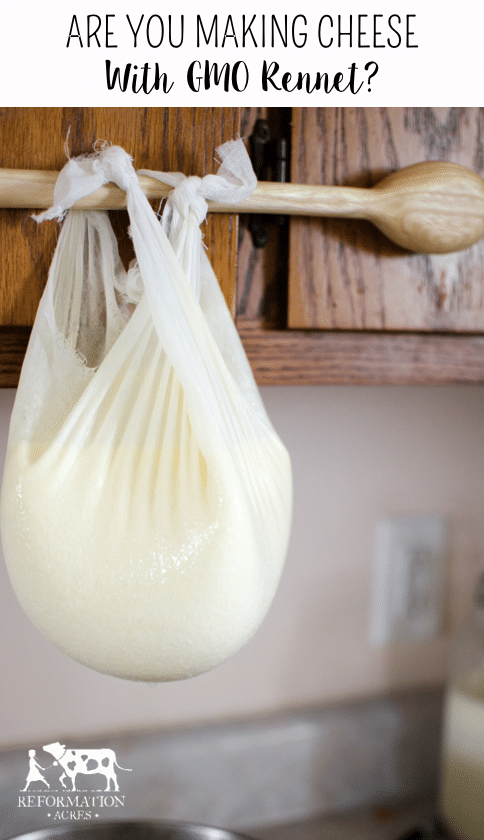 So you can imagine my surprise when I learned the truth about most of the cheese made in America. (Including the fresh cheese I was making with raw milk from our Jersey cows in my very own kitchen!)

It is being coagulated with genetically modified (GM) rennet!

I am dumping my bottle down the drain!

Disclaimer: Chelsea Green Publishing provided me with a copy of The Art of Natural Cheesemaking in exchange for an honest review of the book.

After reading through The Art of Natural Cheesemaking: Using Traditional, Non-Industrial Methods and Raw Ingredients to Make the World’s Best Cheeses, I learned that there is more to rennet than meets the eye. The decision of which rennet to use in your cheese isn’t as simple as tablet or liquid, vegetable or animal. 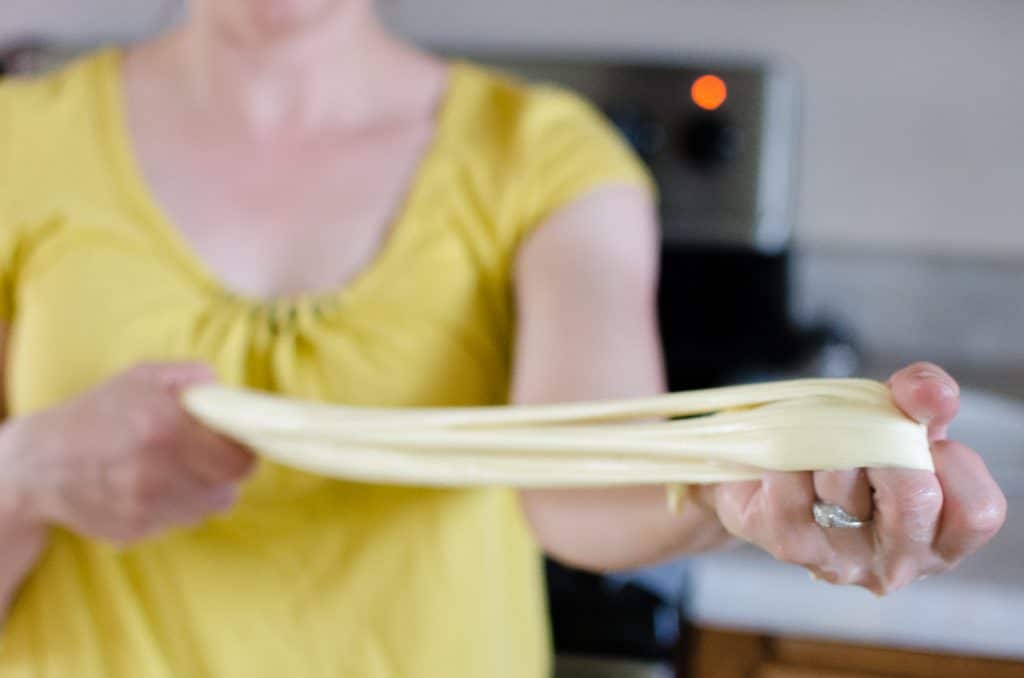 There are 4 types of rennet used in cheesemaking according to the book:

[True rennet is ] a mixture of enzymes, including chymosin and pepsin that help coagulate milk into cheese.

It’s made from the stomach of a milk-fed calf. Since it is a by-product of the veal industry it is considered unethical in cheese production. Consequently, it has become increasingly expensive and difficult to obtain as the market for veal declines.

Vegetable rennets are coagulating agents of plant origin… They are not as effective as other milk-clotting enzymes and do not allow a cheesemaker to handle the curds in exactly the same manner. Commercial supplies of these vegetable rennets are difficult to find.

[These are] fungal cultures that naturally produce enzymes that coagulate milk much like rennet. Unfortunately, [they] do not make cheese that’s as good as what calf rennet creates.  These synthetic enzymes can give cheese a rubbery texture and , when aged, an upsetting bitterness. As well, the curd formed by microbial enzymes behaves slightly differently from rennet curd and can create complications.

FPC is produced with the aid of transgenic bacteria, specifically species of E.coli or Aspergillus niger that have been given a gene from a cow expressing the production of chymosin, which allows the microorganisms to synthesize the enzyme in bio-reactors without the slaughter of calves.

Most American cheeses are made using this type of rennet. A rennet created as the result of genetic modification.

GM rennet was not subject to a review when it was given Generally Regarded As Safe status by the US Food and Drug Administration.

Furthermore, David Asher argues in The Art of Natural Cheesemaking not only are the alternatives equally unethical but often ineffective and possibly harmful. 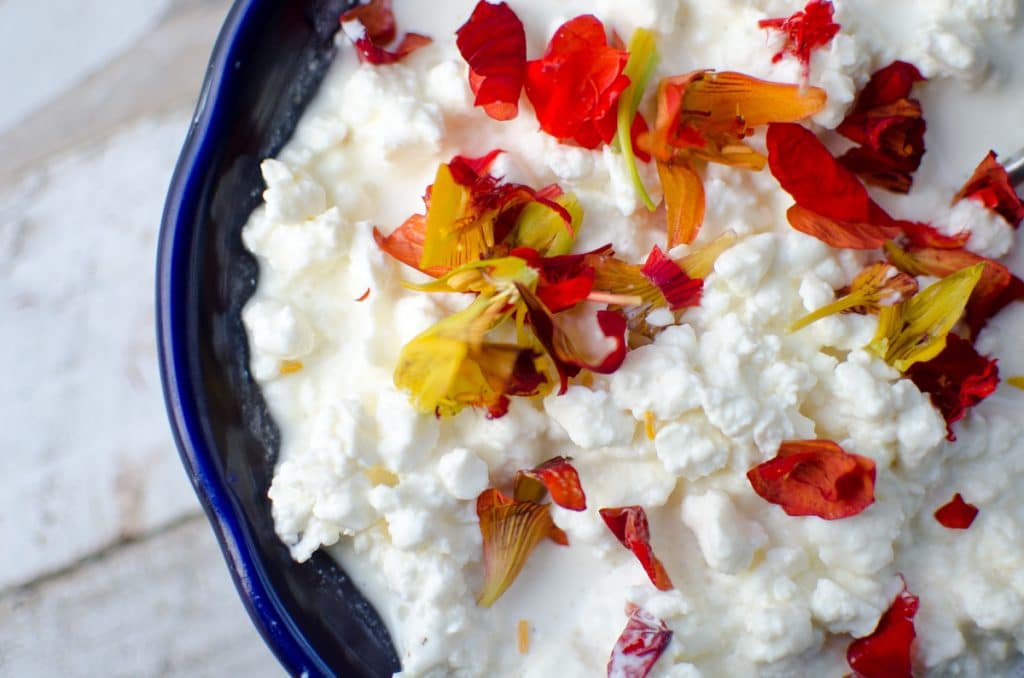 What’s a cheesemaker to do? Asher recommends using products from WalcoRen which creates a certified GMO-Free rennet.

The Art of Natural Cheesemaking

For the homesteading cheesemaker, you should really get your hands on The Art of Natural Cheesemaking!

Asher has a unique approach to cheesemaking that I find intriguing. His method is much like capturing wild yeast from the air for sourdough bread baking. He creates raw milk cheeses and appreciates the connection between animal health, proper milk handling, and tasty cheese.

His philosophy is “Good milk, rennet, and salt. Together with your capable hands, and the cool and humid environment of an aging cave, these are the only ingredients needed to make good cheese.” No mention of purchasing sundry “starter cultures, freeze-dried fungal spores, microbial and genetically modified rennets.” Nor does he use calcium chloride, chemical sanitizers, or harsh nitric and phosphoric acids”

It truly is a “self-sufficient” guide to cheese.

Asher takes you through those 3 essential ingredients and elaborates on the importance of the quality of each. He introduces you to the tools of the trade.  And he guides you to create your own cheese cave before diving into teaching you to culture and ferment your own cheese products.

In addition, there are many recipes to try your hand at making. These include kefir, Chevre, Feta, Blue Cheeses, Brie, Camembert, Washed-Rind Cheeses, Mozzarella, Clothbound Cheddar, Gouda, Alpine Cheese, Ricotta, and even Cultured Butter.

And he even teaches you how to make your own rennet. (There’s a homesteading skill for you!)

So if you want to learn to make cheese at home without being dependent upon outside suppliers to make quality cheese, this is the book for you!

I’m thankful for the eye-opening and that I’ve learned of safe alternatives for my family!