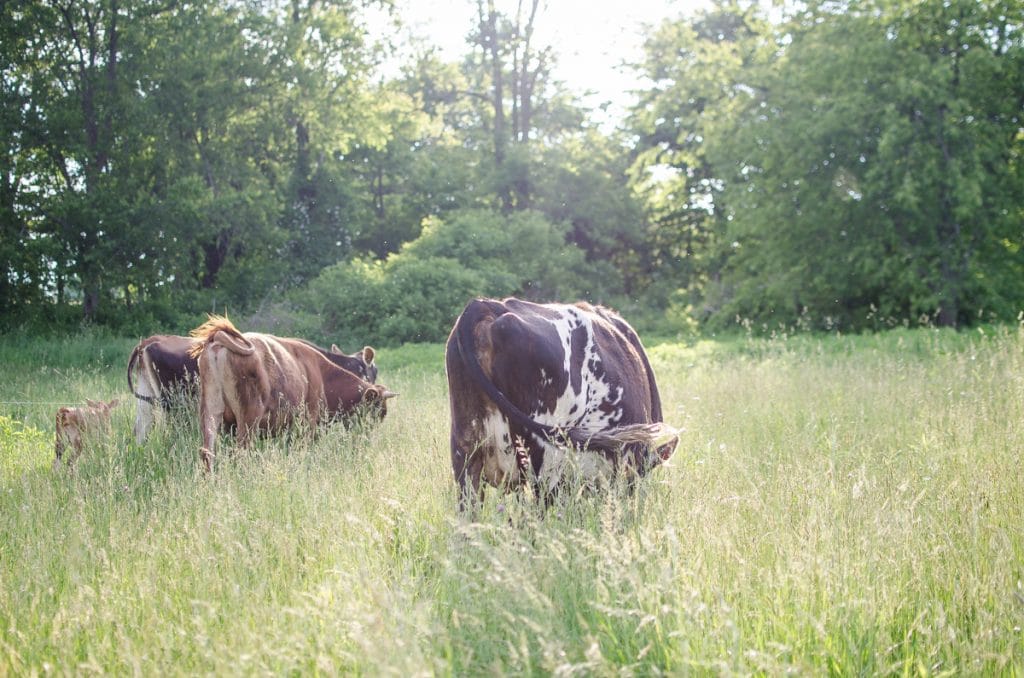 “How to Dry up You Family Cow.” Otherwise known as “The Annual 60 Day Raw Milk Fast.” It is a time that will test your patience and cause much lamentation. It means water with your breakfast or, worse, store-bought milk. (You might try that once, but only once. It’s only when you go back after having had the real thing that you’ll realize how disagreeable any other milk is.)

I’m writing this as much for me as I am for you. It doesn’t matter how many times we’ve dried up our family cow, we argue every time about how we did it last time. Sometimes we remember correctly. Sometimes we don’t. Earlier this year we didn’t and it almost cost our cow her life. Yes, drying up a family cow, especially a Jersey or other dairy breed, is that big of a deal.

When we had our Dexter, drying her up was a non-event. Why? Because several weeks before we planned to quit milking her prior to her next calf being due, the amount of milk we were getting once a day was so meager that we quit because it wasn’t worth milking her. We’re talking milk totals that could be measured in cups a day. She would naturally begin drying herself up when her calf was sold or weaned and weeks later we’d notice a significant decrease in yield.

Quick Tip: Keep the best homesteading records with the  SmartSteader homestead management app so can keep a close eye on changes in your dairy cow (or goat’s) production and behavior and make better decisions! 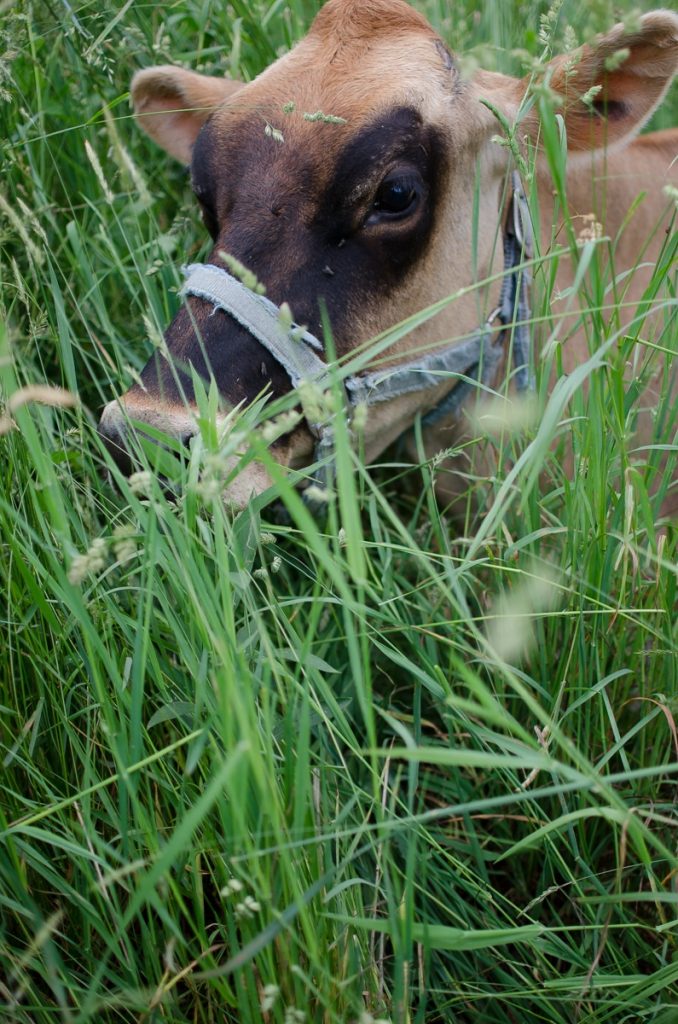 When we had our first Jersey she was still going strong when we reached that point where we would start thinking about drying her up. We muddled through the process a couple times and then this spring, several weeks after drying up Holly, realized that she wasn’t acting well. She wasn’t eager for the new paddock we were putting up, she was laying down when the other cows were enjoying the new grass, and she wasn’t chewing cud. We couldn’t find any reason for not feeling well. It’s not like she had mastitis or milk fever. She’d been dry for weeks and her calf wasn’t due for weeks.

We figured she just got into something that didn’t agree with her again. We checked on her often, made her get up if she was laying down too long, and monitored whether she was eating & drinking. She was, but still, no cud chewing and her rumen was never full. After a day or so, we saw that her one back quarter had swollen, was red, & shiny. I’ve nursed my babies enough years to know what that meant and called the vet who came out and, sure enough, diagnosed her with mastitis. Milking her was like milking ricotta cheese. The vet treated her for ketosis, mastitis, and to dry up that quarter. Her fever had gotten up to 105 degrees. We fully expected to lose her calf.

Thankfully, we didn’t and have beautiful little heifer. But we learned our lessons and will be much, much, MUCH more careful in the future.

We did our research, successfully dried up our next Jersey to have a calf, and the next step to being more careful is sharing this “How To” so that I can reference it next year as I no doubt will have to. Hopefully, you’ll find it helpful too! 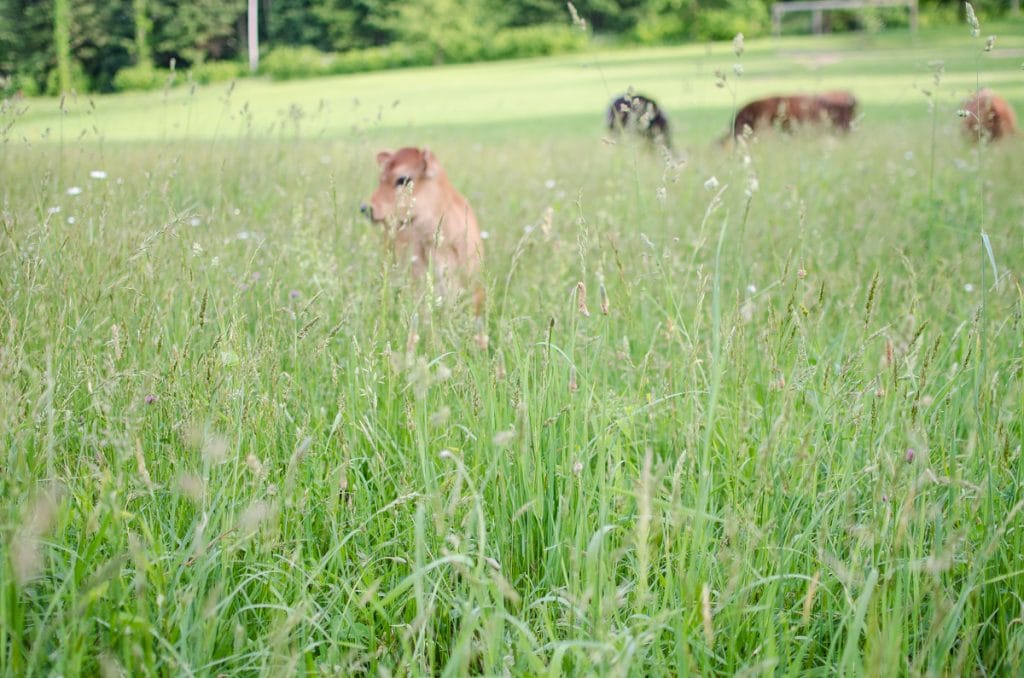 {How to Dry Up Your Family Cow}

Step #1- Calculate her due date.
After I get back positive test results from the BioPryn blood test, I use this online calculator to figure out when she’s due to calf and then enter that date onto the SmartSteader homestead management app.

Step #2- Figure out when you’ll need to dry her up.
Count back about 75-80 days from her due date. This is the day when you’ll want to start taking active steps to reduce her milk supply. I set a reminder on my computer as well as adding a note on the calendar in my homesteading binder.

Step #3- Start milking once a day.
When that day arrives it’s time to switch to once a day milking. Pick which milking you’d like to skip and then stop milking her then. 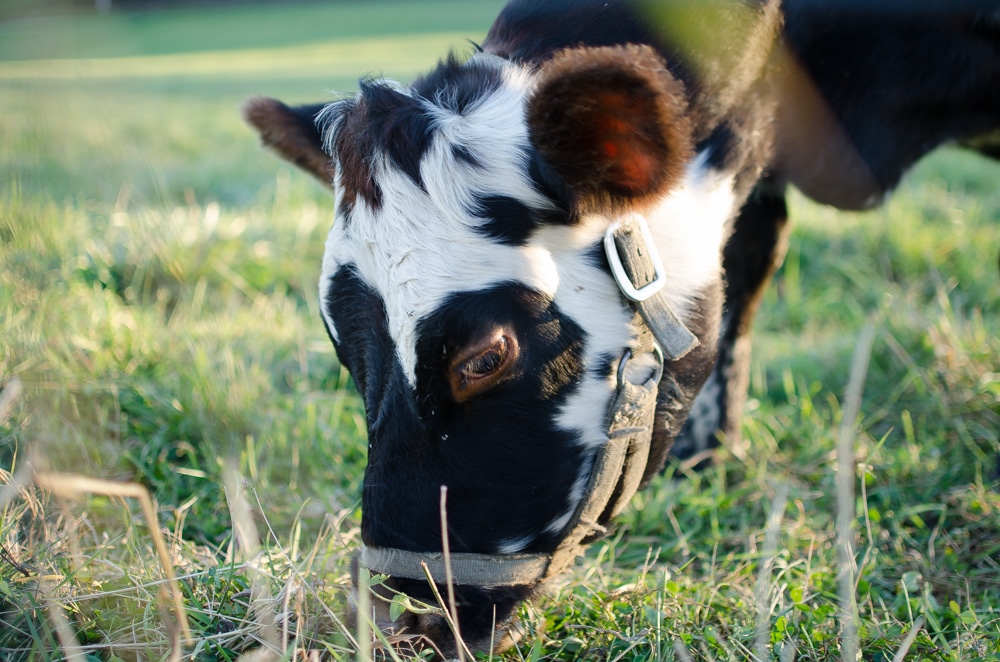 Step #4- Change her diet.
If you’ve been giving her a grain ration to improve her body condition or milk supply, it’s time to cut it out. If the grass is fresh & lush, begin bringing her into the barn and feeding her some hay. Over the next couple weeks as you dry her up, increase the hay ration until it’s at least half her diet. Good grass is going to increase her milk supply. (Which is counterproductive.)

Step #5- Transition to every other day milking.
At 65 days prior to her due date, begin skipping milking every other day for several days. Her body is going to be sending signals that she no longer needs to be making milk. The less you milk her, the less milk she’ll make.

Step #6- Stop milking her until she calves.
It’s 60 days until she’s due. The dreaded day has come. Yes, it’s the day you’ve been working towards, but that doesn’t make it any more a time of rejoicing. You’re not going to have milk for 2 months. It’s enough to make a girl cry. (Especially if she’s pregnant. Not that I’m speaking from experience or anything. Ahem.) Thankfully, the time you’ll spend analyzing the size and spring of her vulva as the due date approaches will serve as a distraction.

Step #7- Treat her with a dry cow treatment. (Optional)
You’ll probably skip this step until you have a close call. I know I wouldn’t have ever used it until now. Basically, this is an antibiotic you inject into her teats to protect her from getting mastitis. Another option might be to prepare a balm with peppermint and tea tree oil. (This is how we naturally treat minor mastitis infections during lactation.) My concern with that is that rubbing it on her udders and teats might be counter-productive if the stimulation causes her to let down.

It’s a good idea to continue to handle and visit your cow during the normal milking times. She’s used to seeing you and, especially if she’s in a one-cow-herd, will be missing you if you take advantage of your liberty. If you continue to visit her, handle her, brush her, it’s going to be so much easier for you when it’s time to start milking again. Especially if you have a cow that is a bit on the temperamental side and is fond of kicking during those first few weeks of lactation. Doing so will also keep you in tune to her health needs and you can catch problems early if they arise.

It will also help the time pass more quickly. Which is a great blessing as you endure this most necessary evil. 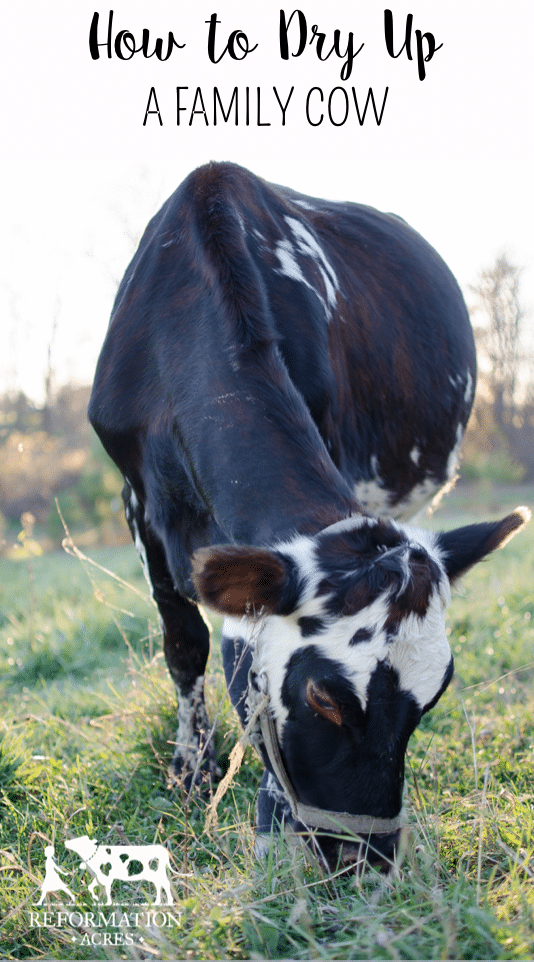