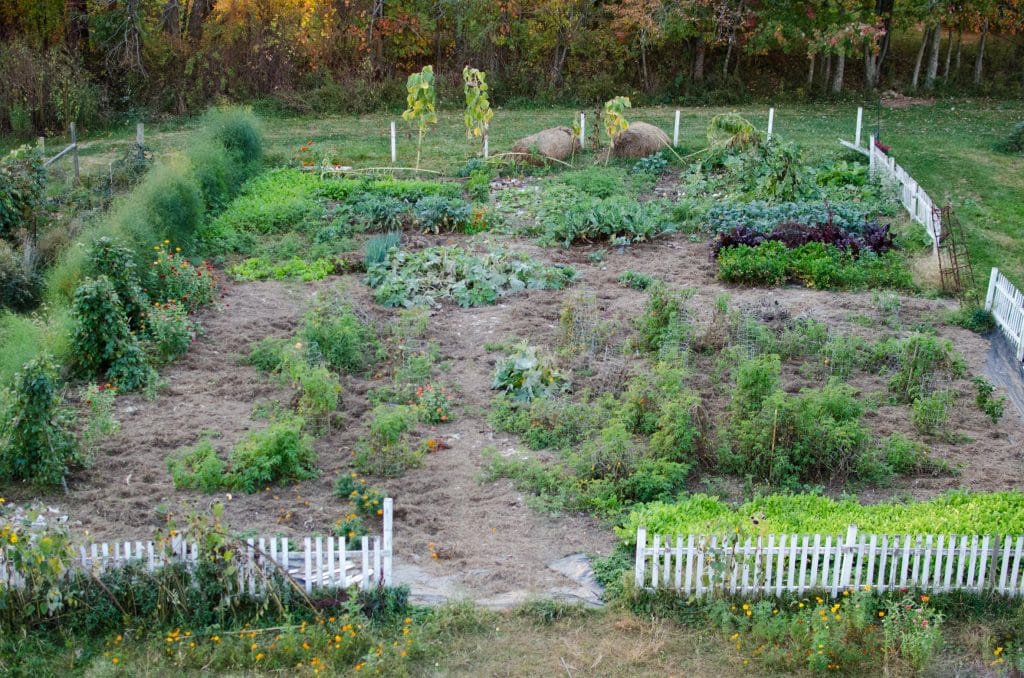 {The Kitchen Garden mid-October, just before the first frost… not pretty thanks to wind damage, but still doing well} 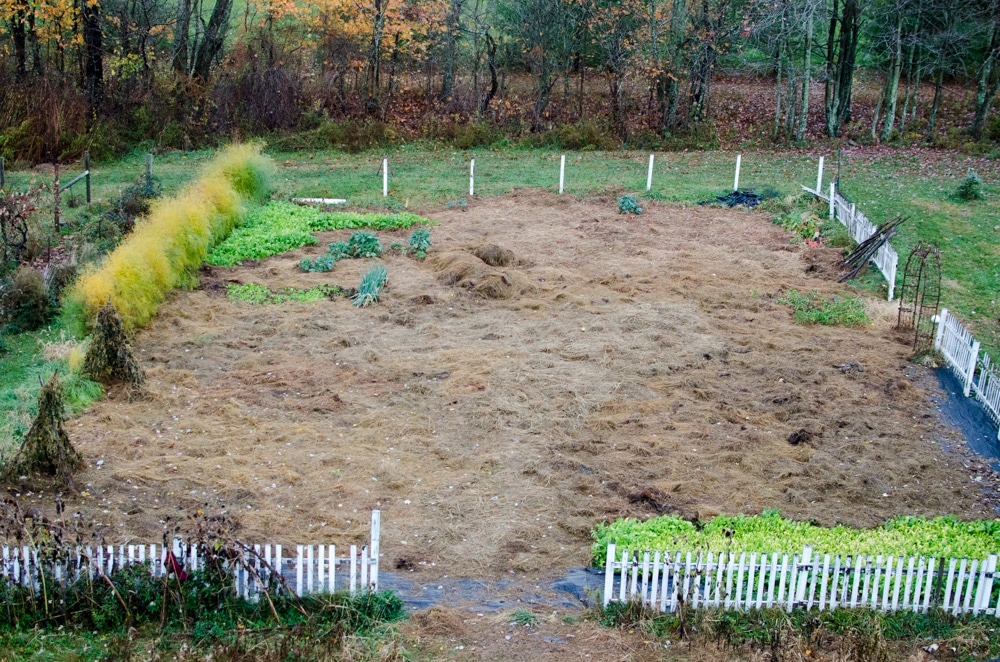 {The Kitchen Garden, 2 weeks later… all cleaned up except for celeriac, lettuce, brussels sprouts, and bunching onions}

Can you tell my garden photographer is working out of the home this summer? He’s never around when I remember to photograph the garden and since it’s not likely that you’ll find me climbing out on the roof when it’s not a life or death emergency, the photos wait.

The last couple months though it’s hardly an issue as the gardens gradually slowed to a trickle before succumbing to a couple overnight frosts right on cue… October 14th & 15th. 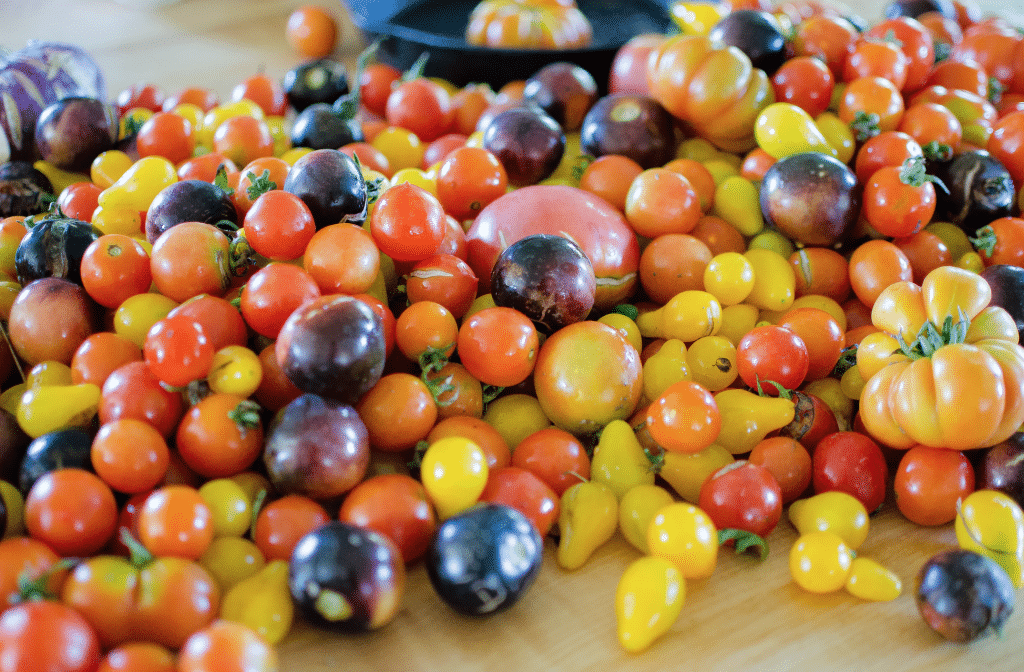 That did in my tomatoes which had finally gotten ripe fruit high enough on the plant to evade the marauding hens. We saw it coming and were able to bring in all of the partially ripe tomatoes and are finishing up the last of the cherry tomatoes two weeks later! Even with all of the tomatoes they ate over the summer, I’m still beyond grateful that I was able to put up about 35 quarts of sauce (I’m too lazy to look for my notes right now… it was between 35-40.) If I ration our usage to once a week, we very well may make it until the next harvest. I can’t sing the praises of this sauce enough. It truly is perfect!

Overall, I was very pleased with the gardening pace I kept the past couple months. It was a nice balance of busy. I feel just overwhelmed enough to be thankful that it’s time to switch gears and get back into homeschooling the children next week. 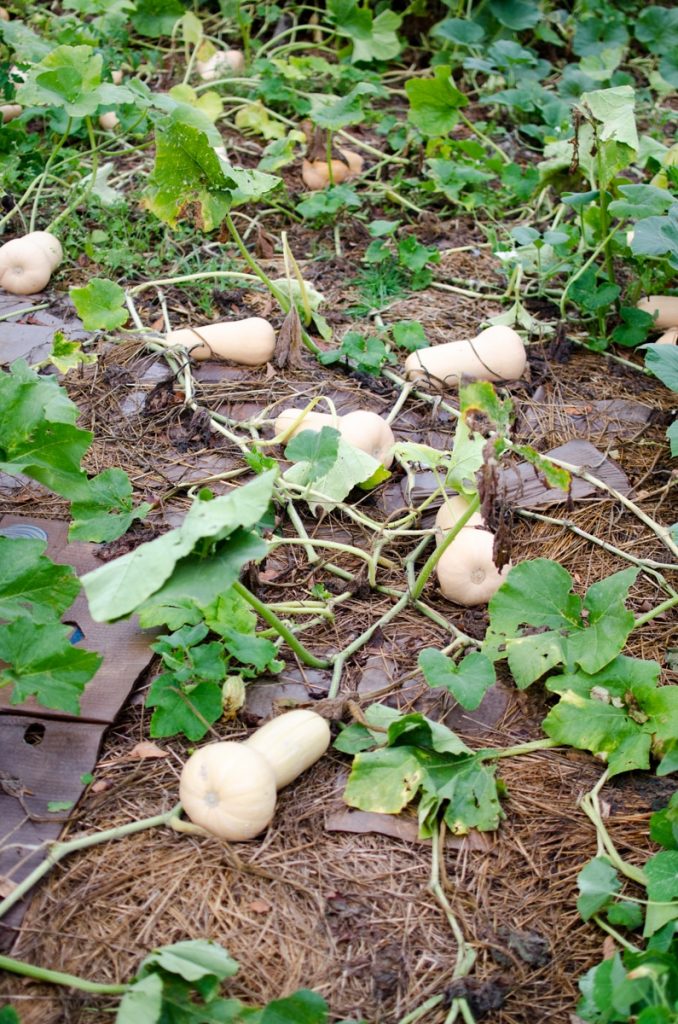 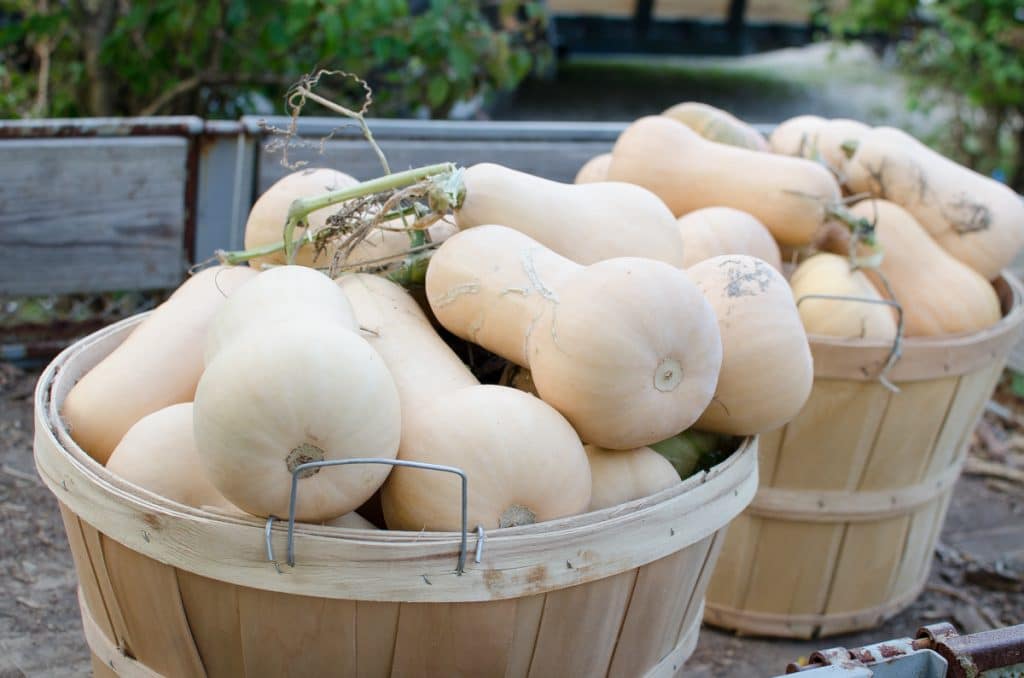 It was a wonderful year for butternut squash! Last year we had none, this year over 130 pounds! Way more than enough to take us into spring! Butternut Squash Pie, anyone? We still have kale and chard growing… I harvested what will be the last few teensy heads of broccoli before we turned the pigs into the corn to clean up. The broccoli was a huge success for me this year in that I actually grew and harvested some. The heads were small (like Raab), but there was still enough to fill a couple of gallon bags for the freezer. It’s not much in the scheme of things, but I’ll celebrate it as a success. I had been just about ready to throw in the towel and not grow any again, but I’ll go ahead and give it another shot I think. 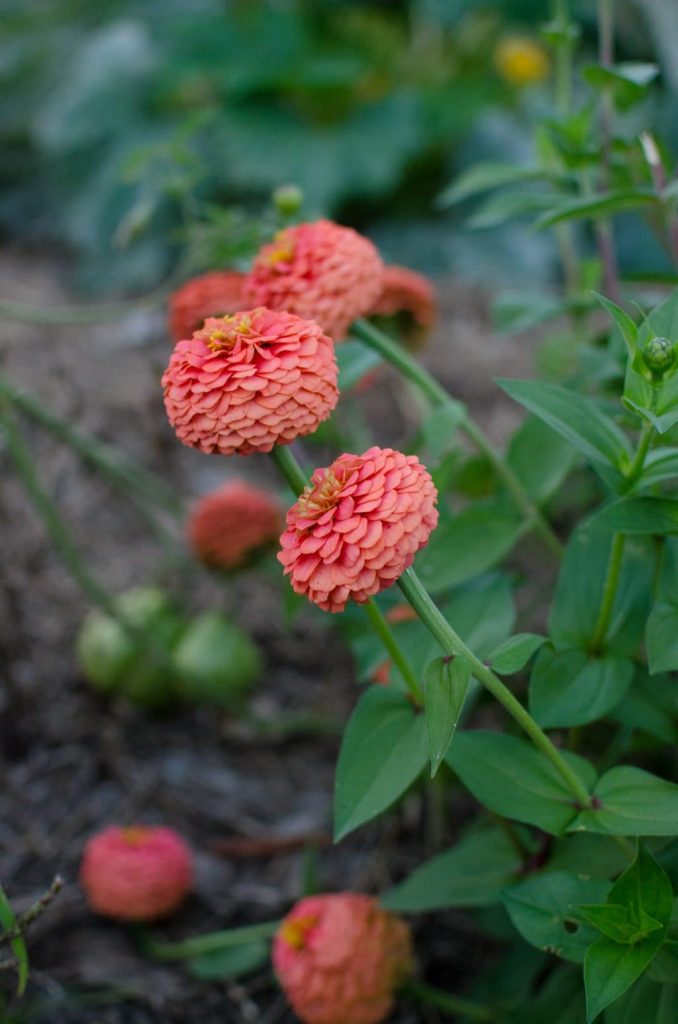 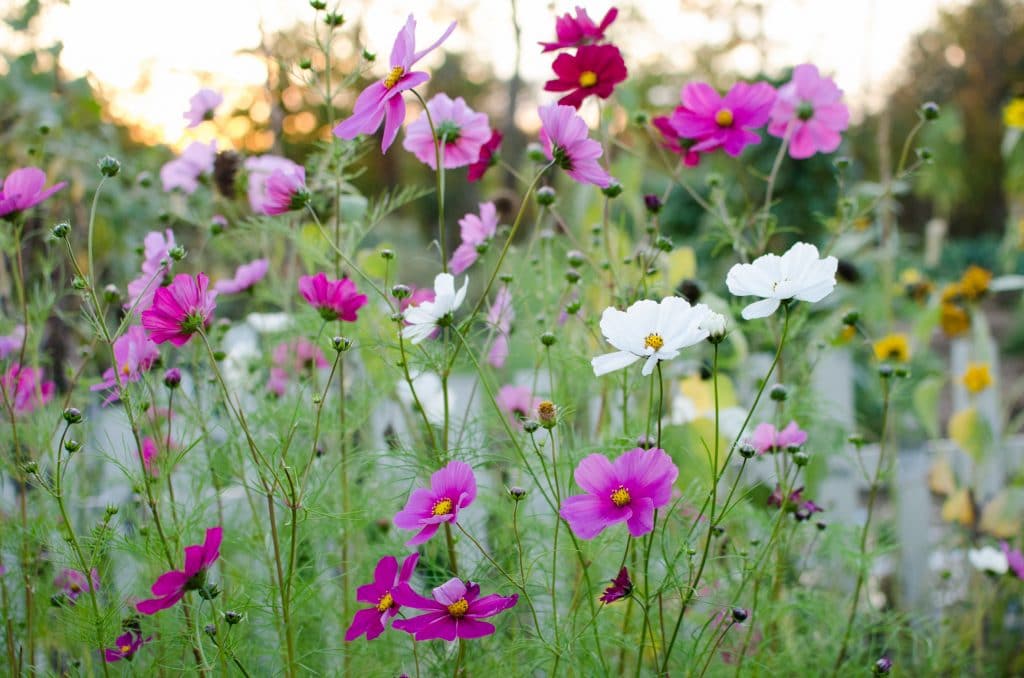 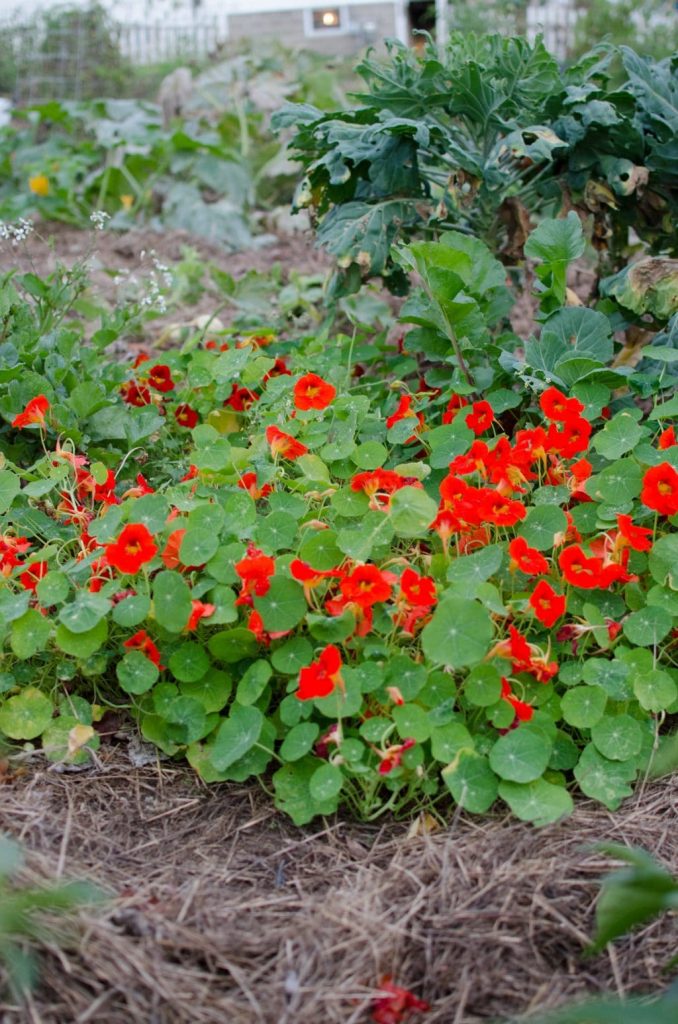 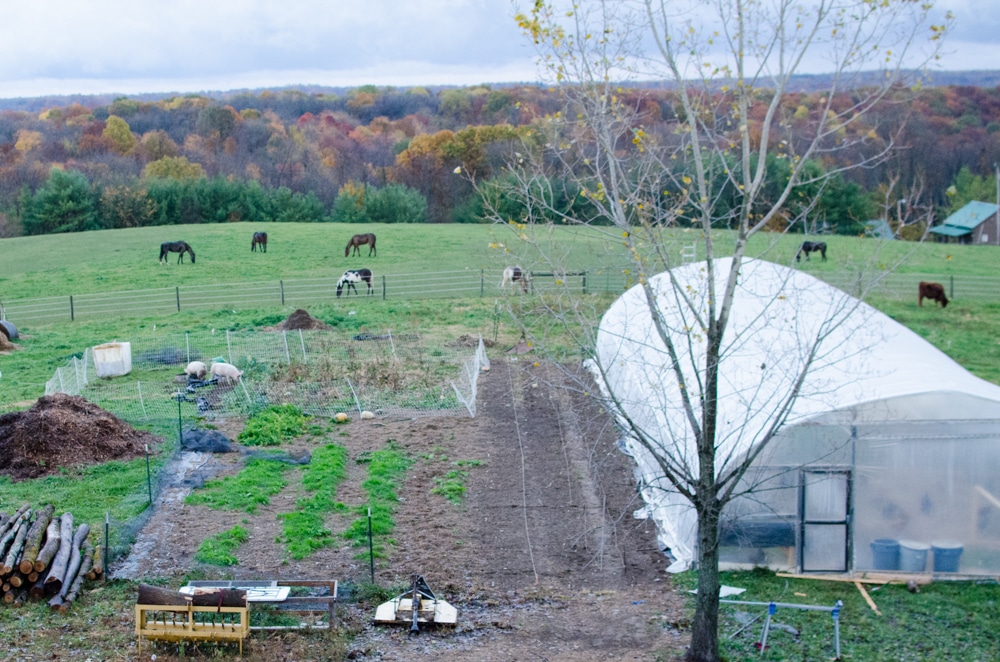 {The Pantry Garden… Pigs cleaning up the back corner, spotty cover crops thanks to the chickens eating the seed, and 300 feet of garlic planted. You can see the front of the greenhouse is our temporary coop. See the chicken shadows?} 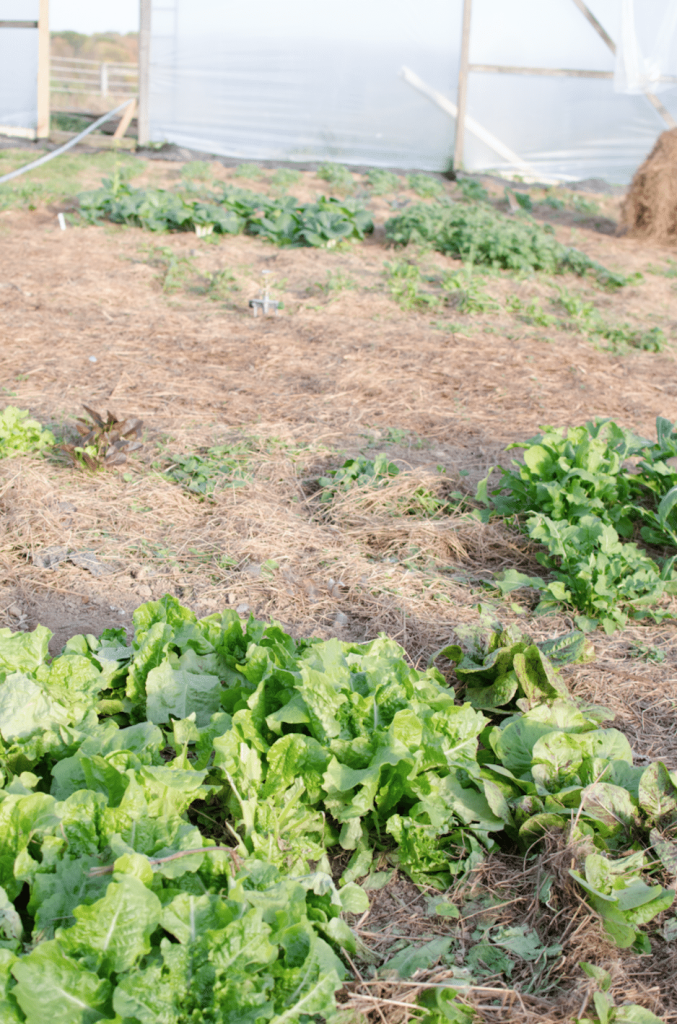 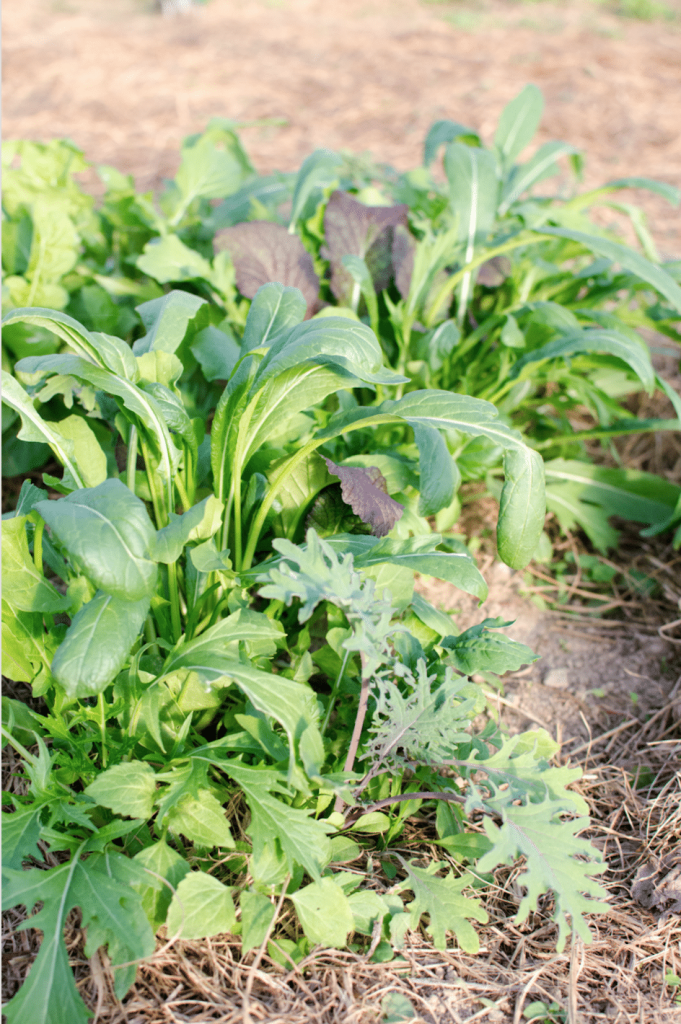 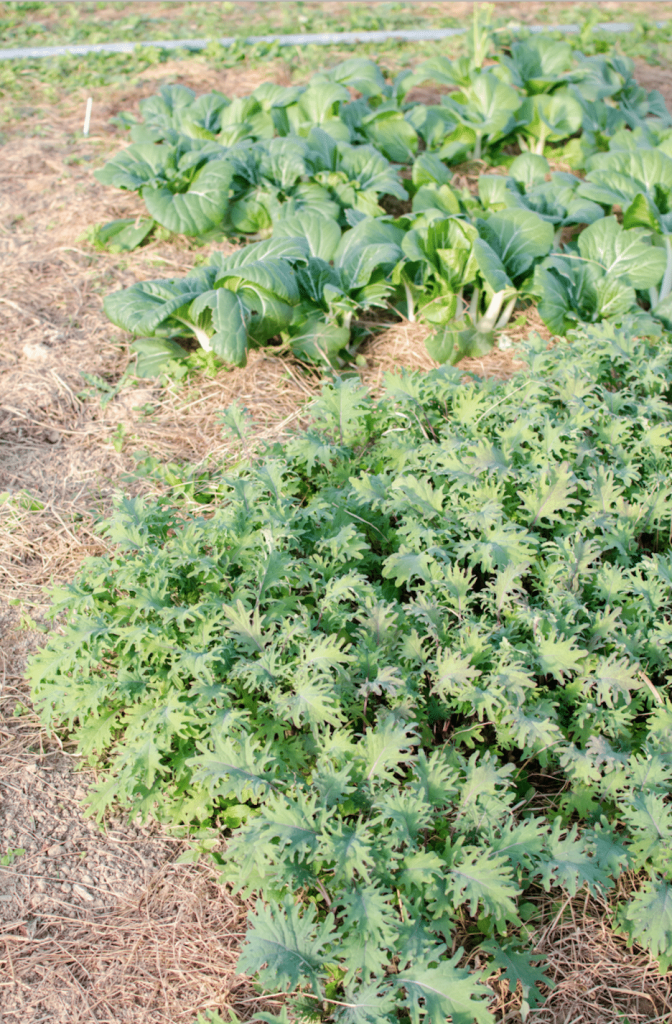 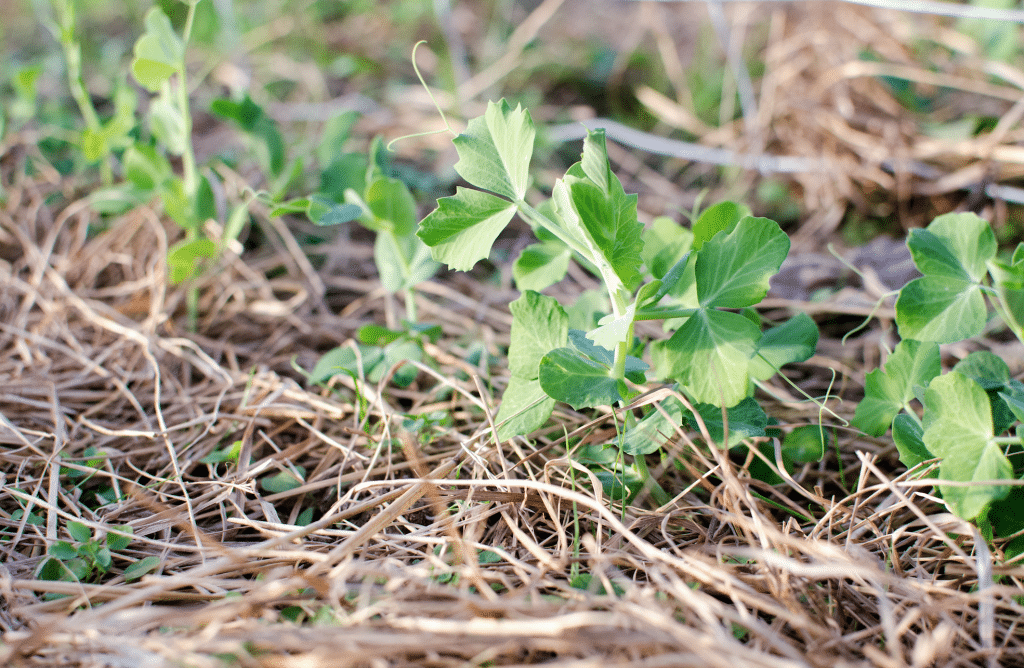 We’ve been enjoying greens and lettuces from the lettuce that went to seed as well as those I transplanted in the greenhouse. Speaking of the greenhouse… it’s been an interesting project and there is certainly going to be a learning curve. (It was 115 degrees the other day, but it was pretty chilly outside so we didn’t think to check until late afternoon. The first transplants of lettuces and greens are doing well along with pak choi, kale, chard, broccoli, and cabbage. Since I’m so lousy at spring peas, I thought I’d see how overwintering them would go. So far so good! 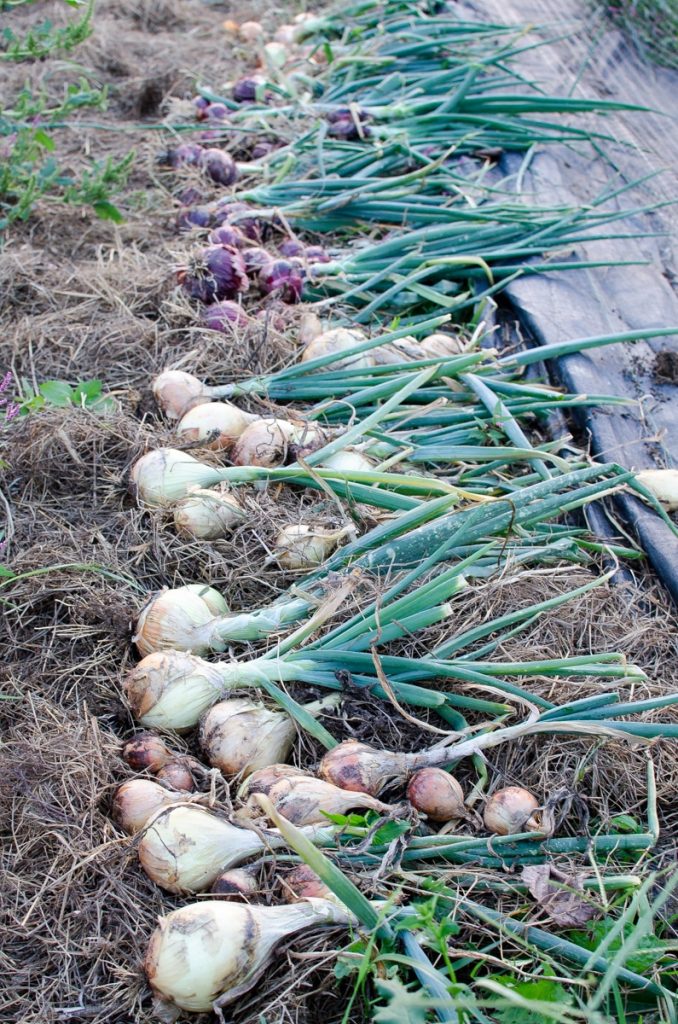 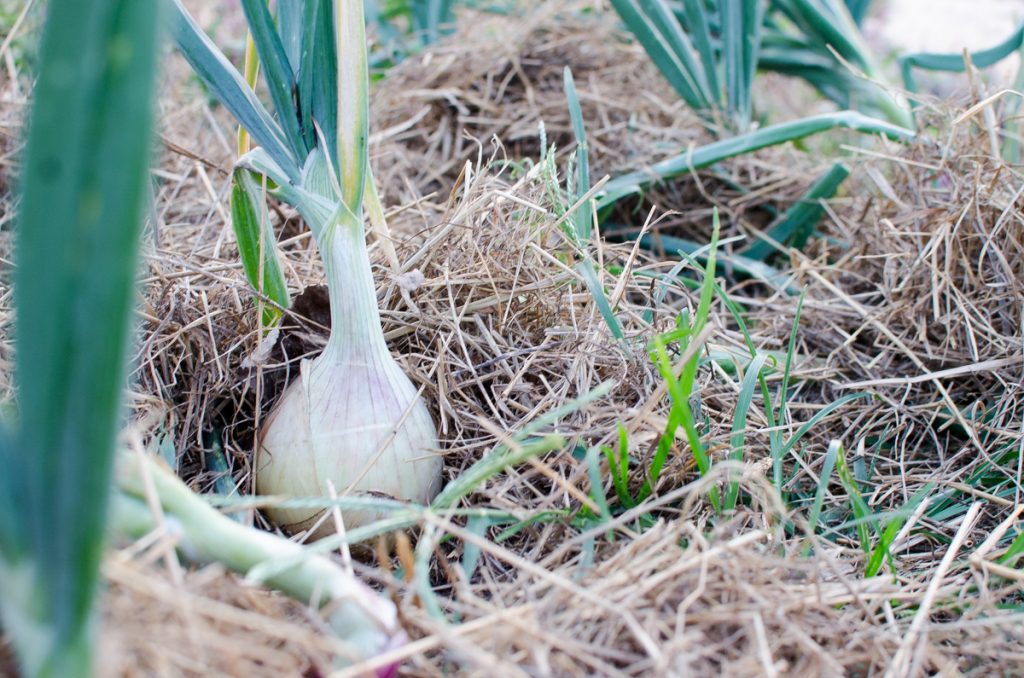 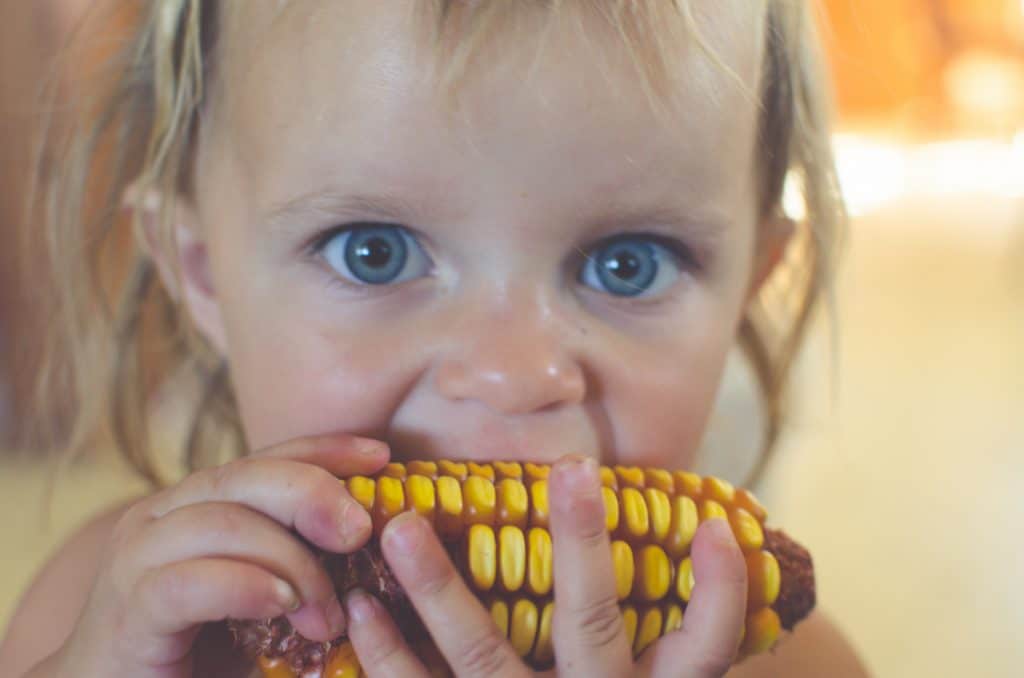 The carrots don’t seem to, though. Like with the ones grown outside this year, they just aren’t a fan of our soil. We’re slowly making improvements as we can, but it’s still pretty hard ground. The best success I’ve had with carrots was the last couple years at our last place where we grew them in raised beds that had been sand mixed in with the soil.

I recognize it’s going to take a lot of time to correct the issues that were the result of poor mismanagement in years past. We’re covering the soil year-round to minimize topsoil loss (not that there’s much to lose). Heavy tillage has created compaction and heavy herbicide use created the perfect environment for noxious weeds. We’re still battling thistle 3 summers later, but it is SO much better, particularly in the kitchen garden where it was a nightmare last year. It’s been pushed back to the garden borders and I expect the situation will continue to improve next year. Honestly, the challenge excites me and I’m very encouraged about the improvements I’ve seen already. 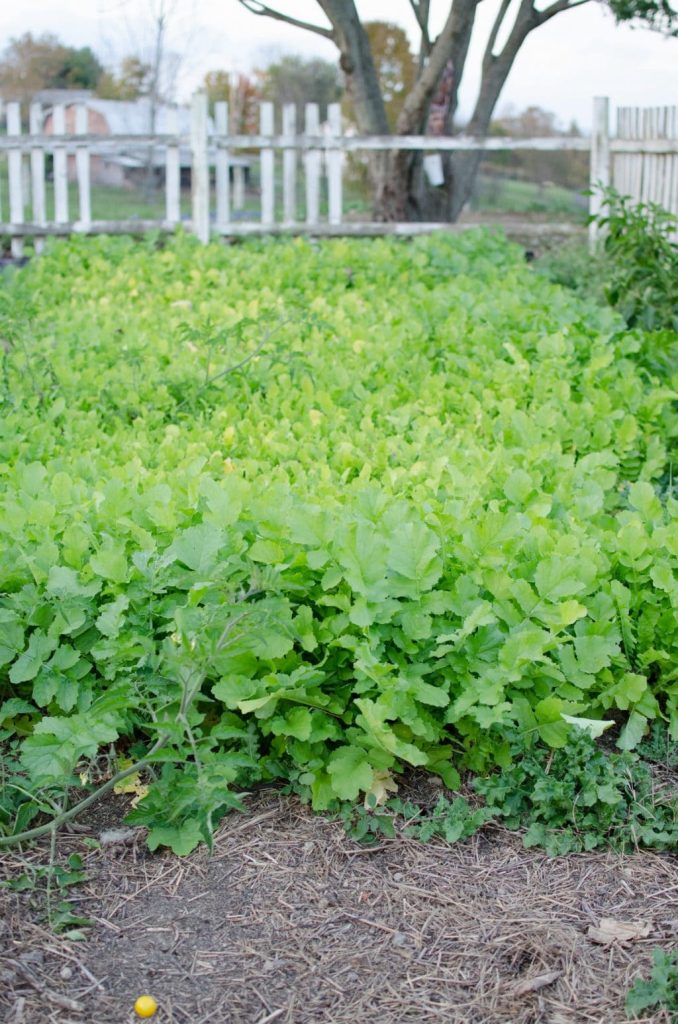 One method that we trying this year to break up the hardpan is tillage radishes. I forgot to take a picture of the root when we pulled one, but they’ve got to be getting close to 6-8″ long. I expected them to die during these hard frosts, but while the tips were burnt, the leaves are mostly still green and growing in the mild weather we’ve been having. I’m going to be carefully planning which crops come out early and planting them in areas where the radishes haven’t grown in the past so they can do their work in all parts of the gardening.

Was yours a good gardening year? Are you already looking forward and planning for next year?