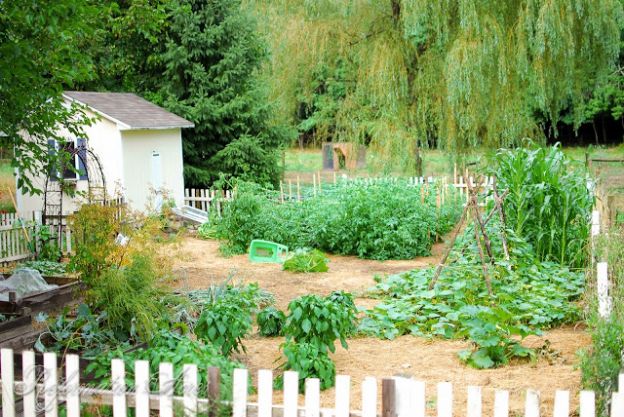 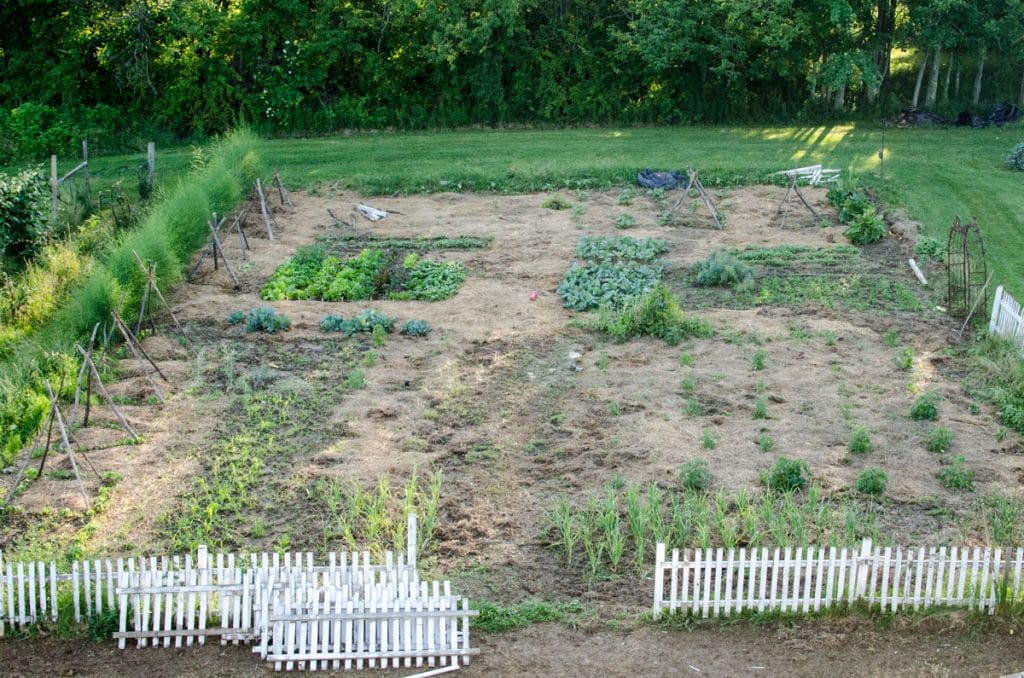 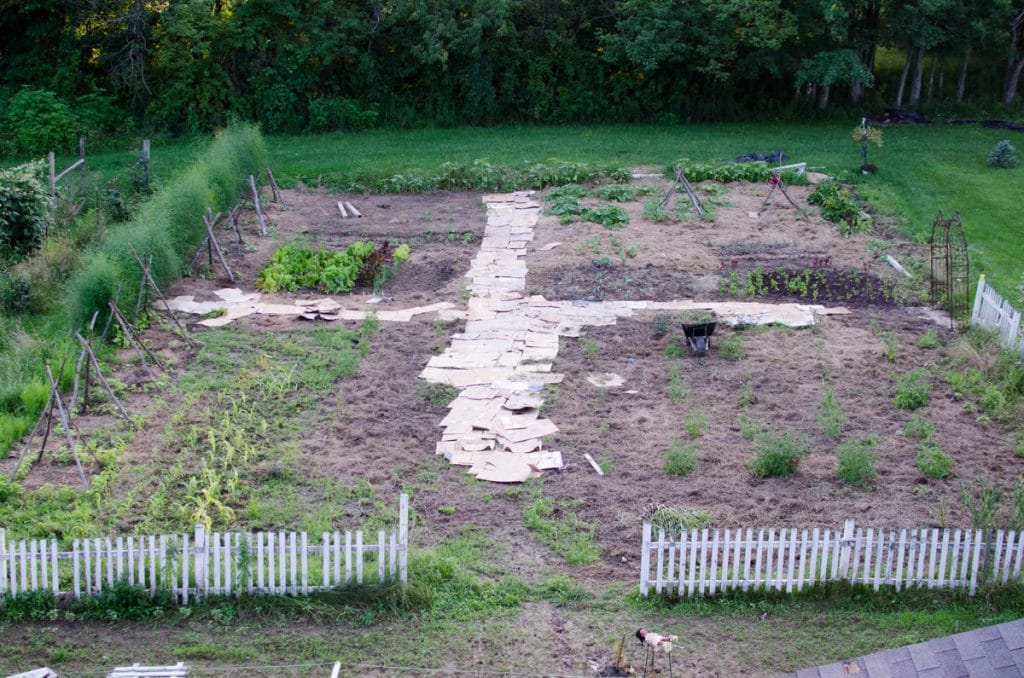 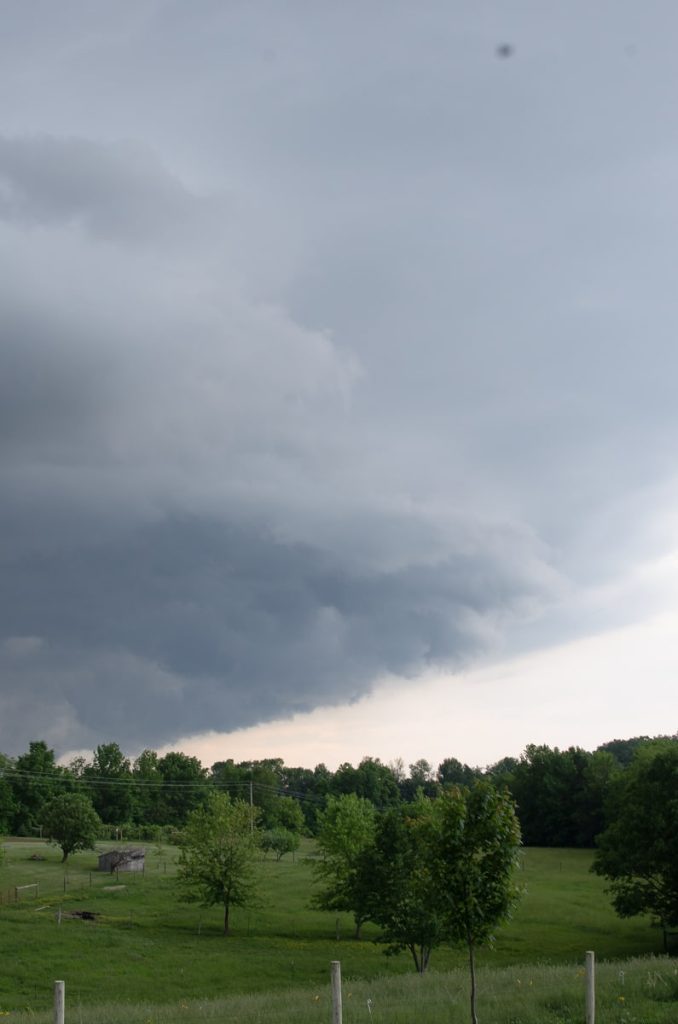 Have I mentioned that it rained last month? Let me clarify that statement.

The last week of May, I posted how frightfully dry our spring had been and our great concern that it was going to be a drought year. We had been discussing irrigation plans for the pasture & gardens, wondering if our pasture would cut it for 4 grown cows & 3 calves. I took a photo of the sprinkler set up and running in the greenhouse, watering the yellow & half dead sweet potatoes and the small dry bean seedlings.

And then it rained.

And it didn’t stop for a month. We got about 8 ½” of rain last month when the average is about 4″. It might as well have been winter for all the time we got to spend outdoors.

And just like that, it stopped on the 1st of July. We’ve been scrambling to catch up every day since.

I wanted to cry, the gardens were so flooded and overgrown with weeds. (Until I saw how flooded the lower barn is. Wow. Just wow. It’s a cess pool and if we all die, you’ll know why.) I’m diligently plugging away at the weeds, getting as much help as I can beg for, and we’ve made a significant dent. I need to weed part of the Pantry Garden & the strawberries have disappeared in a jungle, but then I’ll be at a manageable maintenance level.

The real trouble is, I’m in desperate need for hay mulch and we can’t get in to get it from anywhere. I’m in distress and beginning to contemplate driving 1 ½ to one of the places on Craigslist that has mulch available. Update: We bought a trailer load this morning for a twenty spot. YEA!!!

Let me show you exactly why I love, love, LOVE hay mulch so: 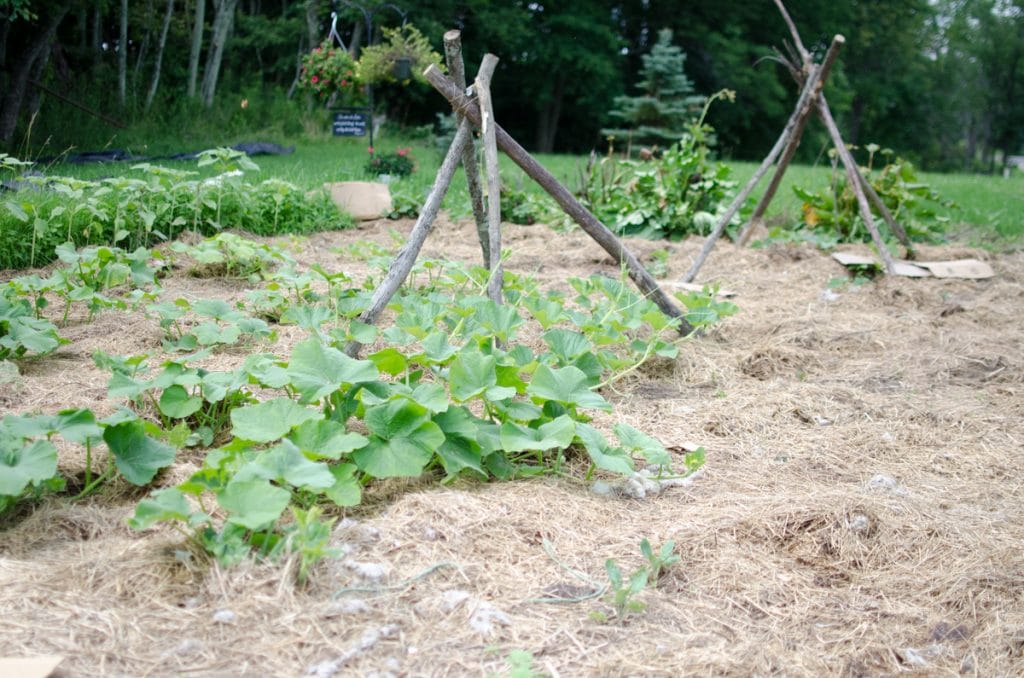 Exhibit A: Heavily mulched; once lightly & the second time heavily 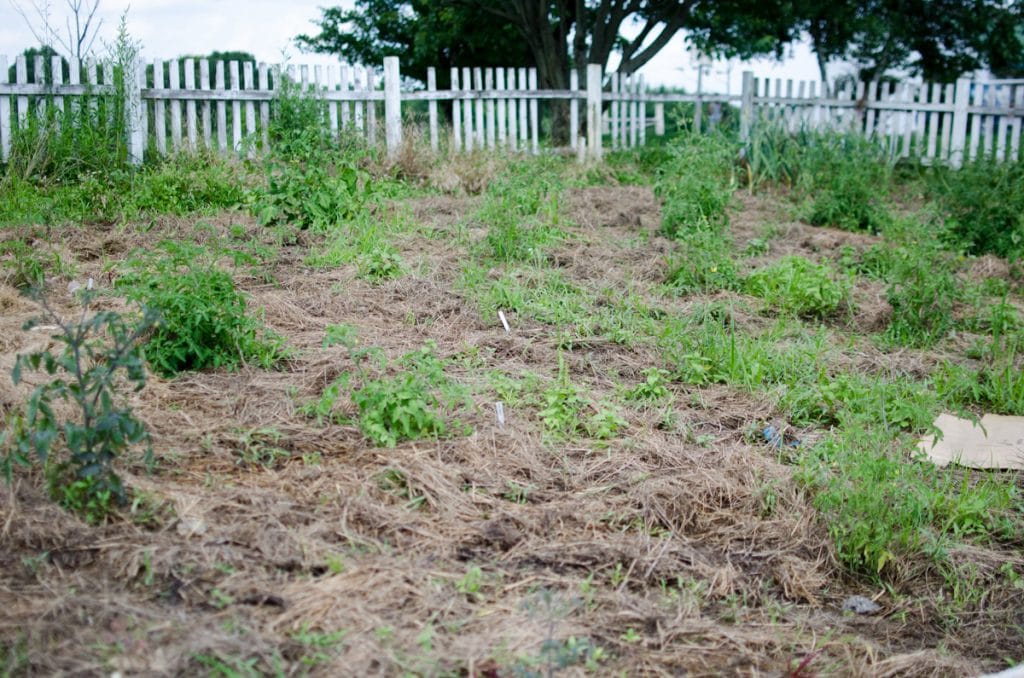 Exhibit B: Lightly mulched, once at planting 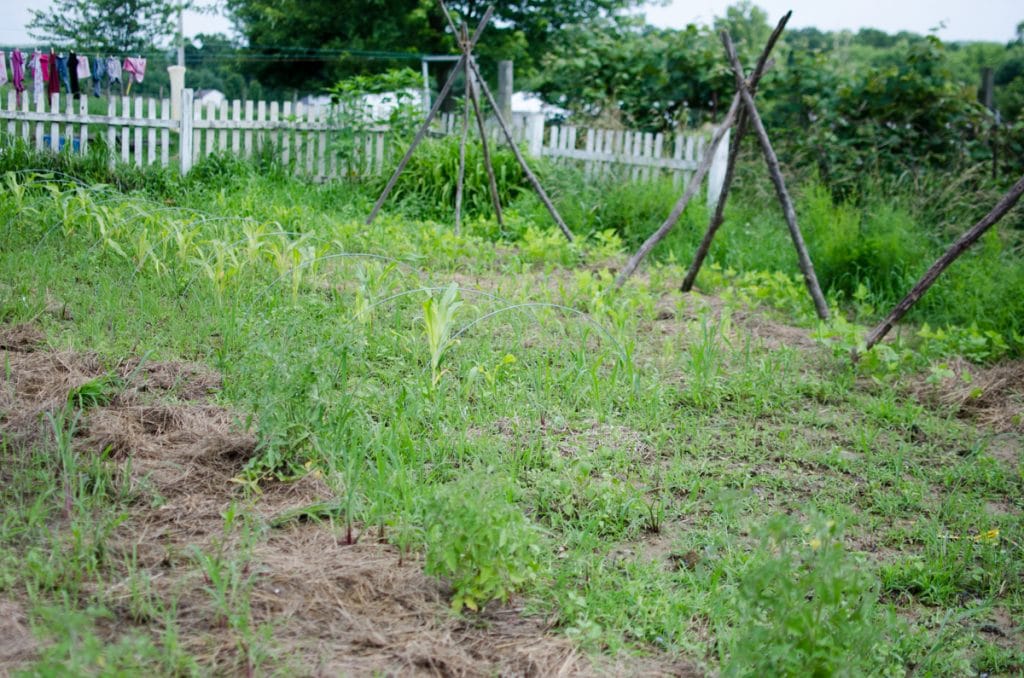 Exhibit C: No mulch; we ran out and then it started to rain

I like to point these things out lest you think I’m just the Crazy Hay Mulch Lady. Why would I want to weed that if I don’t have to? 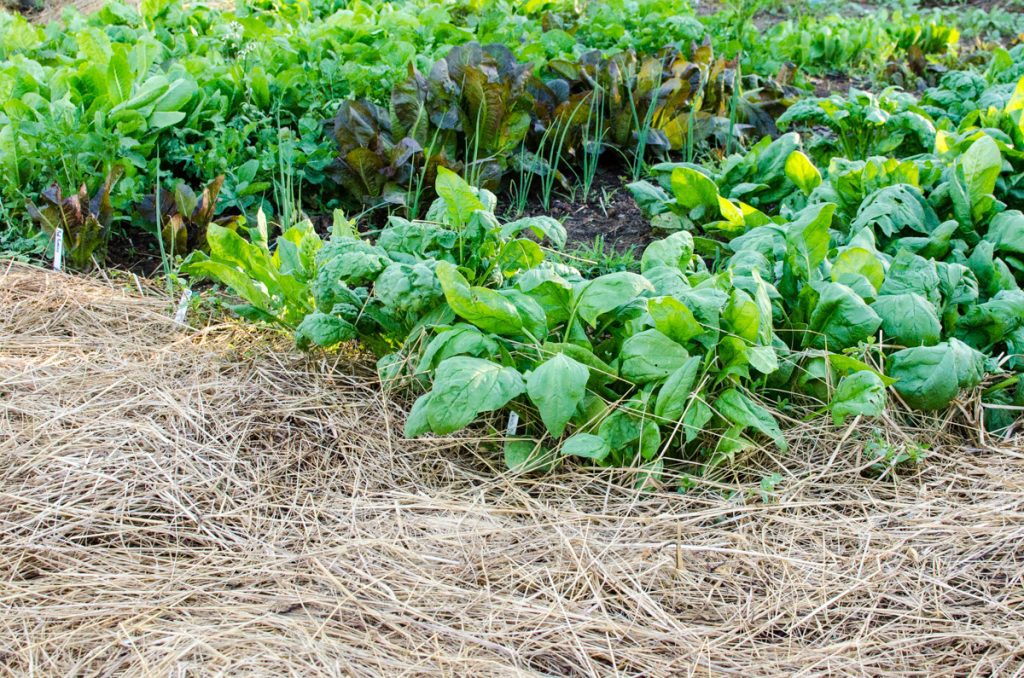 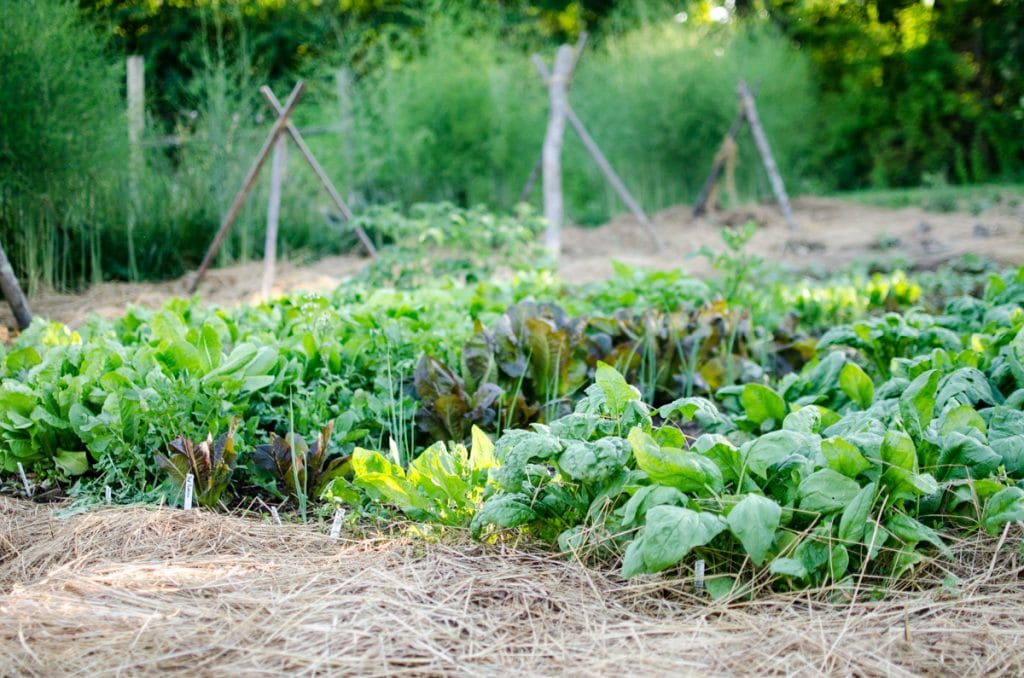 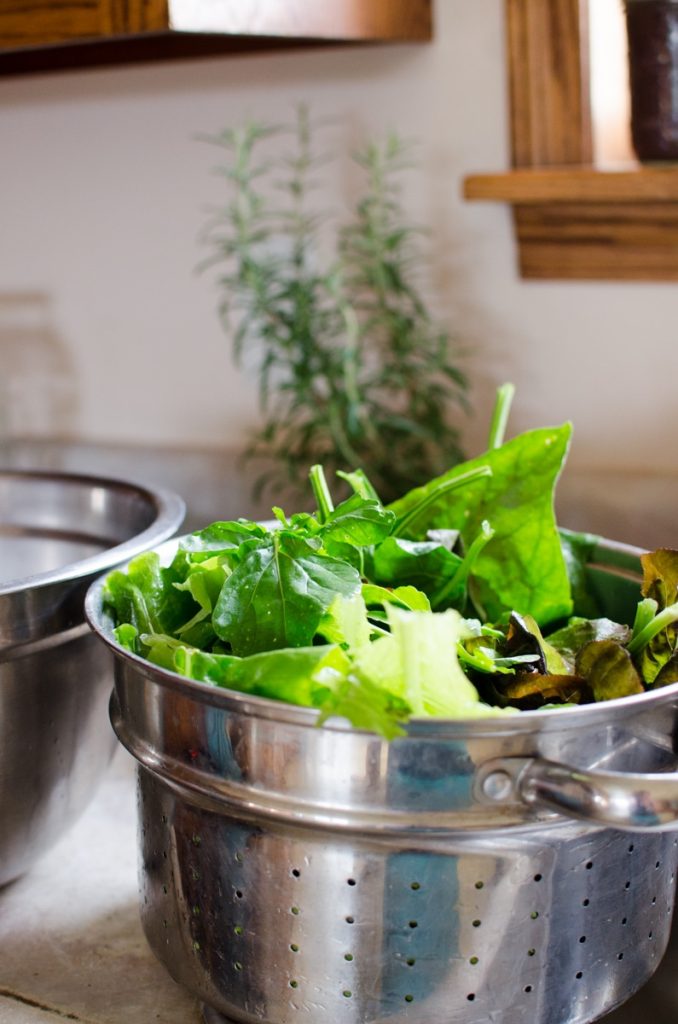 I have never had such a phenomenal lettuce bed as I had this year… I grew spinach for the first time ever! It was a real gardening triumph! Not only that, but it tasted sweet & delicious- no bitterness to be found. And I think the secret is consistent daily watering. That’s the only thing we did different and I’ll certainly be doing that in the future. 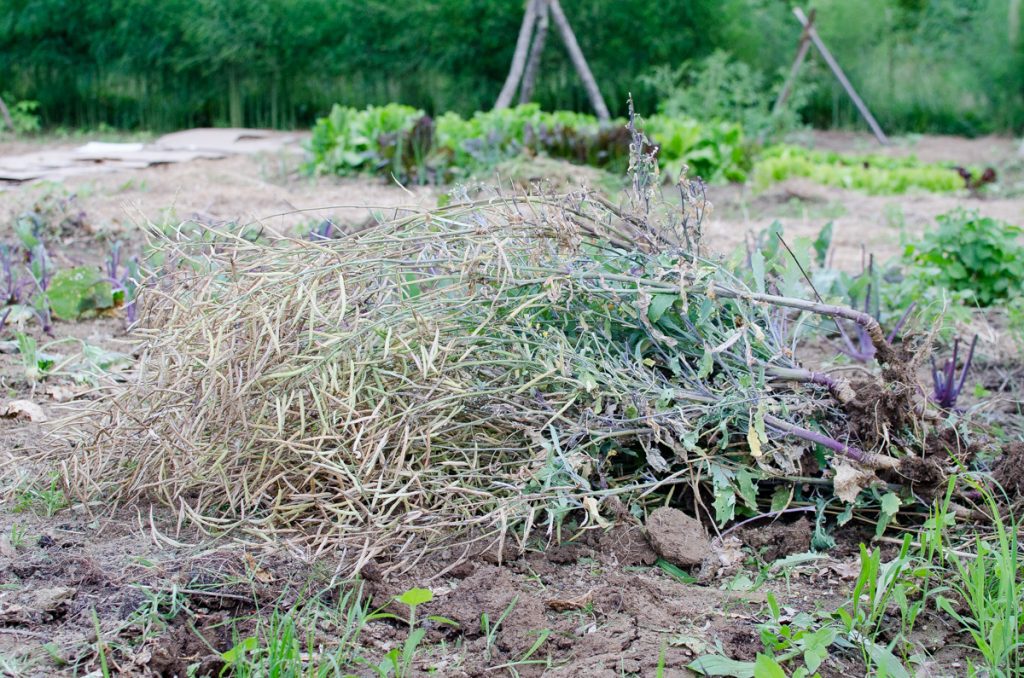 Harvested kale seed… I haven’t had to buy kale seed in years! I love it! 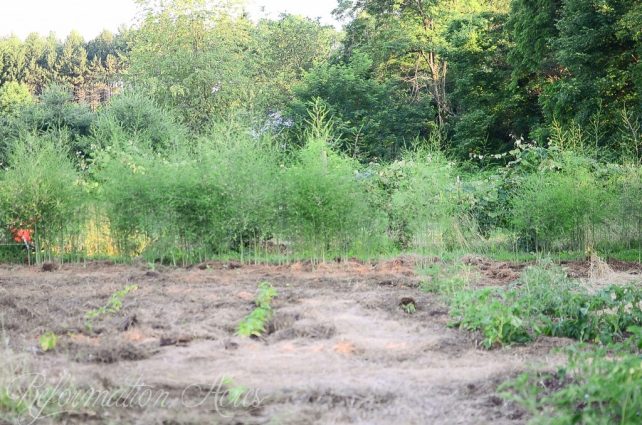 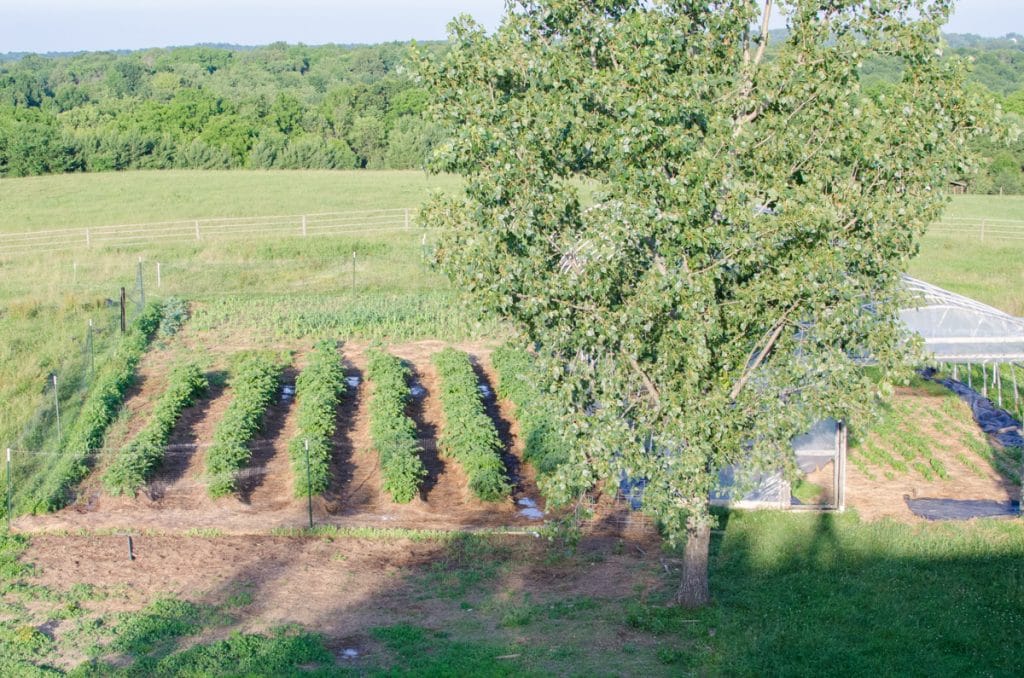 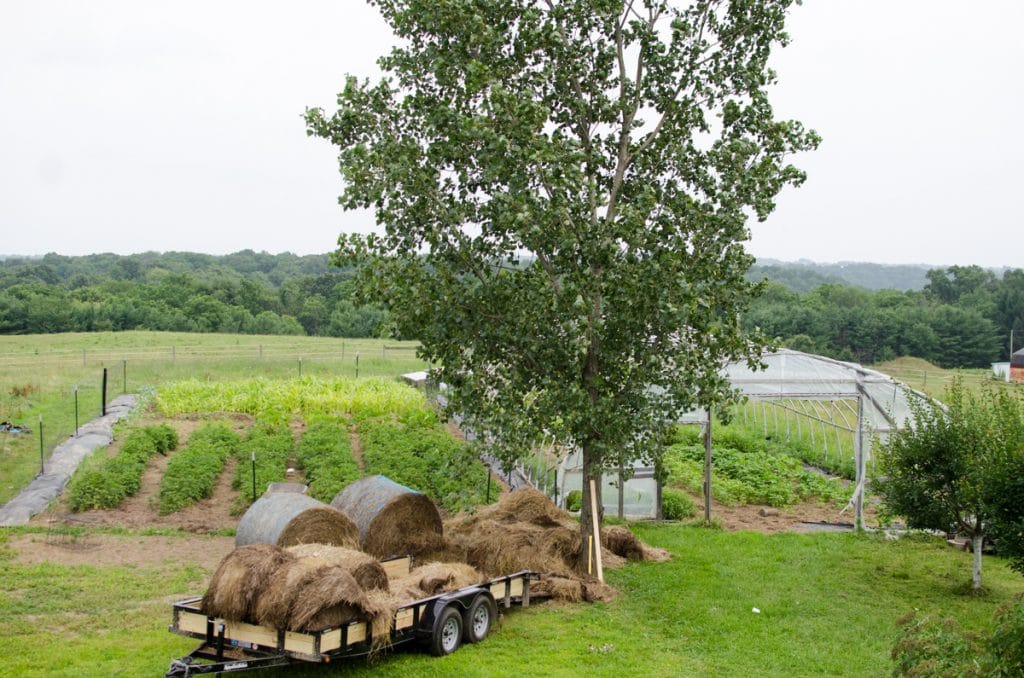 The little flock of 10 sheep determined their fate last month. It was constant putting them back into their portable electric net fencing. Constant. They did so well last year managing the pasture clipping (which is ultimately why we purchased them) that we figure it had to be the lambs encouraging them to jump the fence.

Whatever the cause, their impact on the gardens has been significant. They’ve taken out at least a quarter of the total crops. They completely cropped the corn- which thankfully managed to come back and flourish. Beets, kale, chard,  cabbage, and broccoli are all gone.  And so are the lambs. We thought we’d start there and see if that made a difference & it hasn’t. They aren’t staying in the netting, but they are staying in the pasture so we’re not in a big rush, but we’re selling our 4 Cheviot ewes & Romney ram. (Anyone interested? Not that I’ve really made a good case for them… they’re great sheep it’s just that we clearly don’t have the infrastructure to handle sheep.) 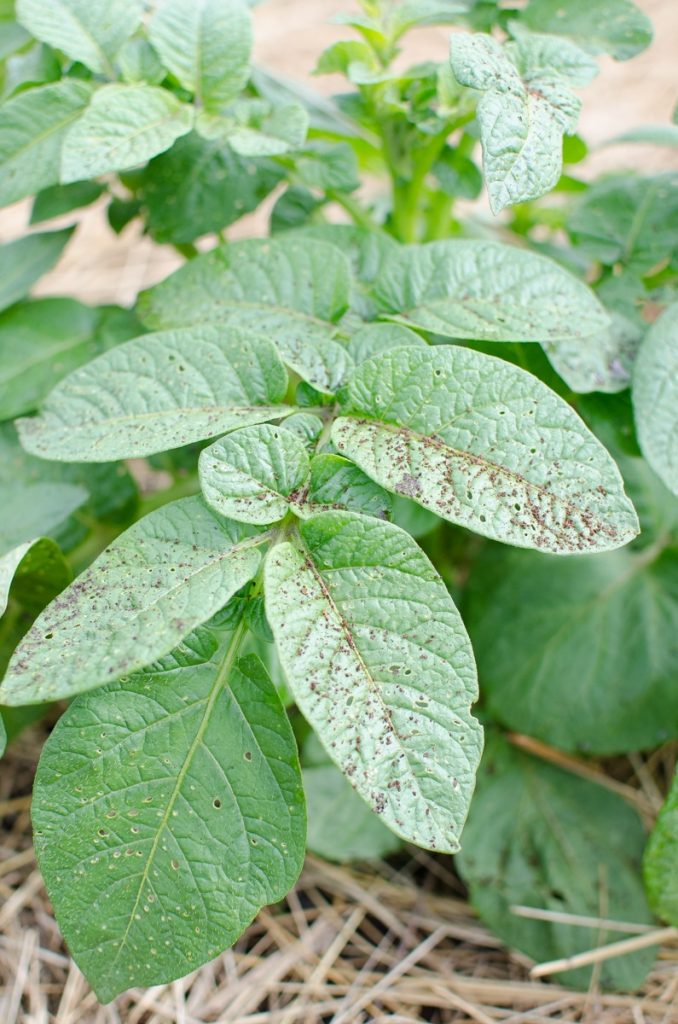 The bigs weren’t too bad in June. They probably drowned. Either that or I didn’t notice them while I was in the house pining out the window.

We did kick off the year traditionally with a lovely flea beetle infestation. They like to go after potatoes in particular, but aren’t choosy. They’ll also munch on peppers, radishes, eggplant, and occasionally tomatoes & brassicas. Not to worry, I’ve a trick up my sleeve and they disappear. 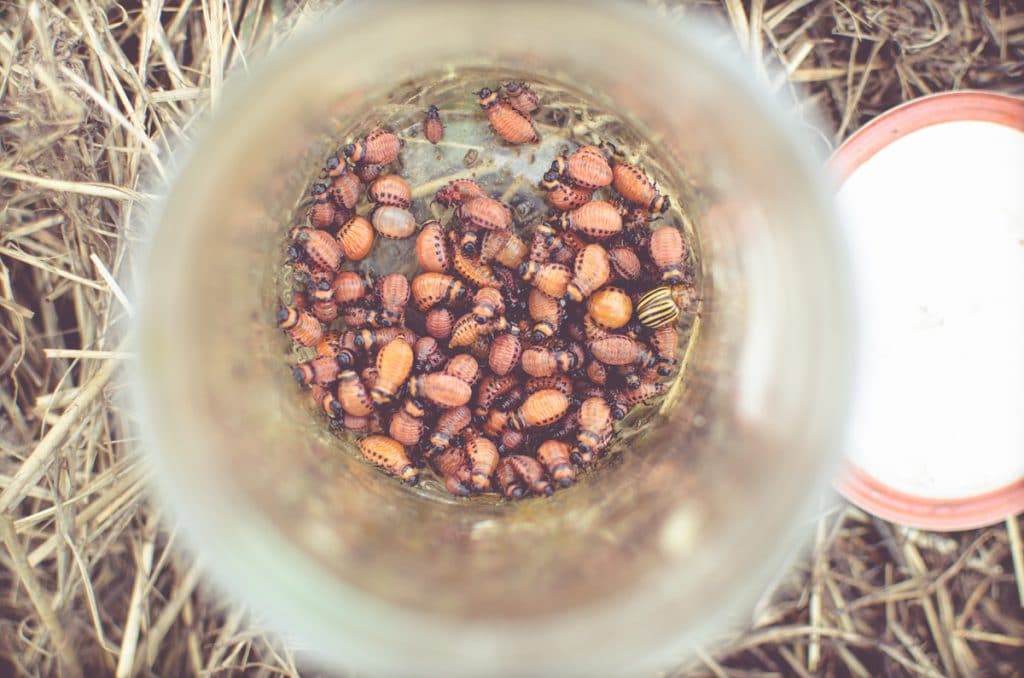 I wish there was as quick and easy a fix for these little nasties. I’ve seen one, two Colorado Potato Beetles going for my tatties before. I swiftly executed them and never had a problem. Last year was no exception. This year though, this year has been awful! Our plants are loaded & I’m determined to rid us of the problem before it grows exponentially next year. I’ve been handpicking & drowning them every day (if there is a dry spot in it.) Still they come. I’ve picked so many that I’ve put on my big girl panties & am even doing it glove-less now. Larvae crap under my fingernails and all. I tried feeding them to the broiler chicks before I drown the beetles, but they’re not interested. ‘Tis a shame. Free protein. I imagine they know best. Now that I think of it, I remember reading that potato leave are toxic to chickens.

We’re at the nail-biting part of the year. (Proverbially because the finger nails are caked with soil & bug “mud” and guts.) Most of the work is done and it’s just a game full of anxiety, patience, and hope until we see whether it will be a fruitful & productive year.

Show me your gardens! How are they coming along? What did you get to harvest today?