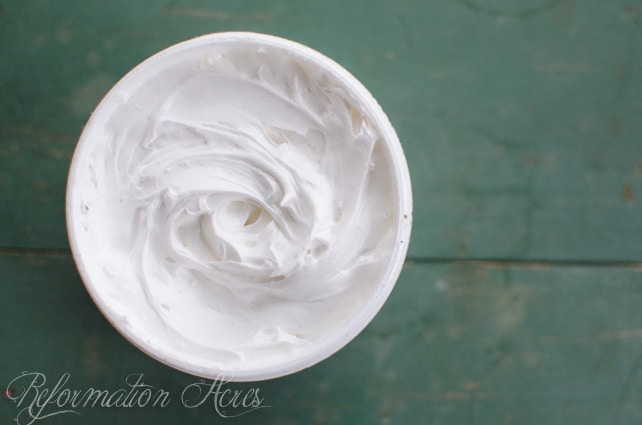 Here’s the recipe for our homemade udder butter cream! We’re whipping up shea butter and coconut oil along with essential oils and a few other ingredients as a natural body lotion on our sweet Jersey cows after milking time. (And stealing a smidge for our own hands too when we’re done!)

Our gals are the best! Ok, so maybe I’m biased. You probably think your gals are the best. And I’m sure that we’re both right. We have good reason to love our sweet cows (or goats) so! Good reasons, rather. I drink a minimum of 3 tall glasses of creamy good reasons every day. Let’s not even mention, butter, ice cream, mozzarella, farmhouse cheddar, ricotta, and cream cheese.

So I want to spoil our gals for all the goodness they share and one way I’ve found is by making them silky, moisturizing Udder Butter balm to use on their mammary glands after milking. (And for full disclosure, I’ve been known to swipe a dab for my old lady homestead hands as well so I can attest to how luxurious it feels and how healing it is to chapped skin.)

Which makes sense since this is an awful lot like all of the DIY body butter recipes you see floating around on the web, making it fit for man and beast. It’s pretty simple to whip up too. 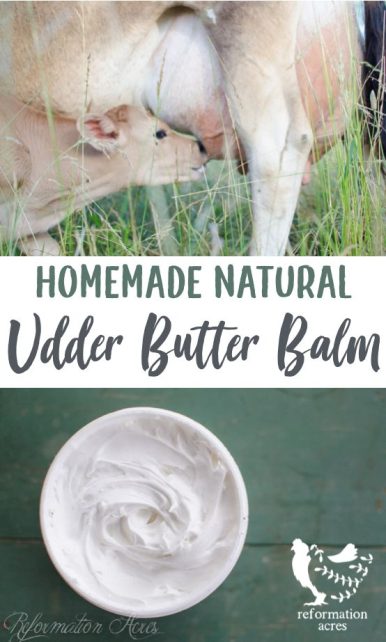 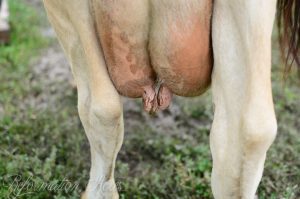 This year, Rusty sure did a number on poor Holly’s teats. At one point they literally looked shredded. That’s when I knew I had to get serious and do something more than a standard teat dip to treat her after milking. I created this homemade Udder Butter Cream and it worked wonders to heal her!

The shea butter and sweet almond oil are incredibly soothing and softening to the skin, so why not for the bovine skin as well?!

The arrowroot powder helps cut down on the greasiness of the oils. I think it’s what makes for such a silky product.

Lanolin is a wonder as many nursing mums can attest too. I won’t have a baby without it! It’s only fair our girls get some after milking. 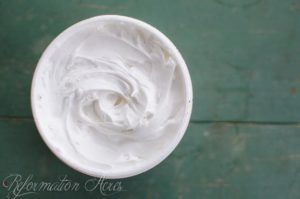 I chose lavender and tea tree essential oils, which are pretty much in everyone’s medicine cabinet these days with good reason. They’re anti- this, that, and the other thing. And so is the rosemary infused olive oil. They’ll keep the nasties away and thanks to that, you might not need to use a teat dip.

I tweak this recipe throughout the year depending on the air temperature. You could use all coconut oil in the winter, the mix of coconut oil & shea butter in the spring and fall, and then harden it up with some beeswax in summer.

Even at that if you leave it outdoors in the 90-degree heat, it will probably melt into a liquid. Forget it in the barn in the winter, it will be pretty hard to get out of the jar. Your best bet would be to bring it indoors after milking, but I don’t ever see that happening with my main milking crew. It’s still usable though. It will resolidify after melting and if it got too hard, chip out a piece and melt it in your hands.

Frankly, the only problem I’ve had with this balm is that if one of our milk maidens is helping… and by one of, I mean someone quite specific (Rebekah)…she’ll forget to put the lid on and leave it sitting real low and our farm dog, Belle, likes to eat it. She eats cow & sheep manure too. Which means two things: 1.) Don’t let her lick you. And, 2.) Don’t take her willingness to partake of Udder Butter as any indicator of its edibility. It’s for external use only.

« Essential Guide To Raw Milk (Plus 115 Recipes)
Gleanings From February »