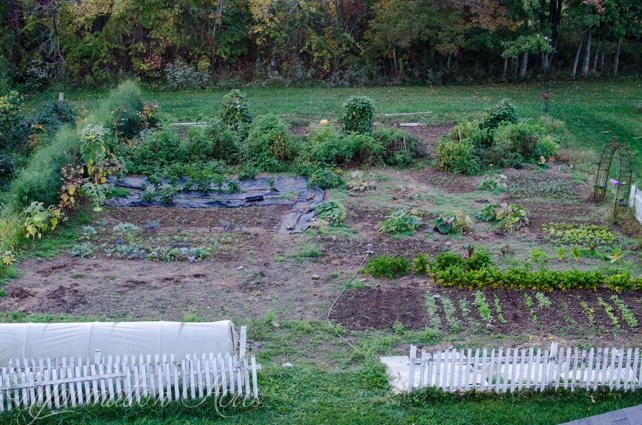 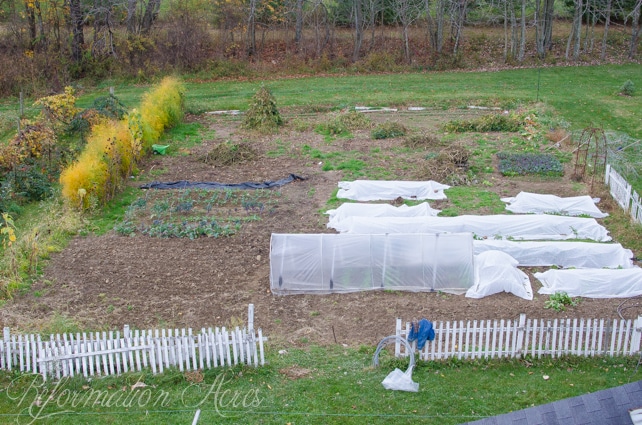 And so ends the summer garden… and begins the fall garden. I’m as pleased as punch with how nicely the fall garden is doing!! It looks beautiful, tastes wonderful. It’s so satisfying to be able to still go outside and gather food for homegrown meals all the way into November (and maybe beyond!)

But here I am looking forward, when I ought to be looking back…

Before I do, I’ve just gotta say,  from this view those last patches of weeds don’t look so bad. Why am I letting them discourage me and think it will take forever to clean up? That’s part of the reason why I love these garden overview posts so. I swear, they’re more for me than anything! 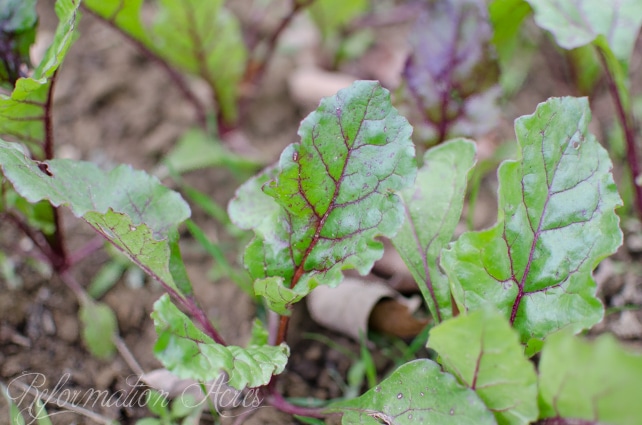 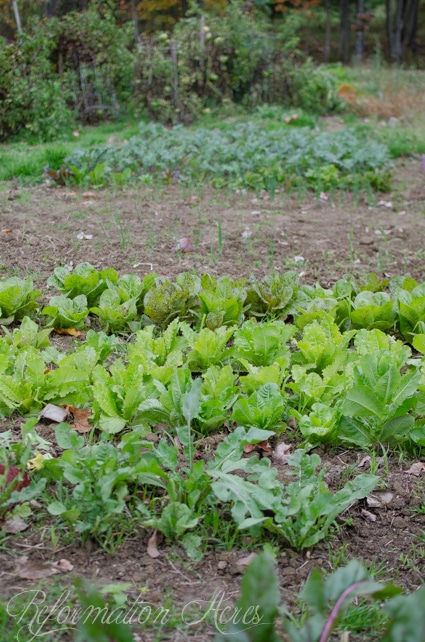 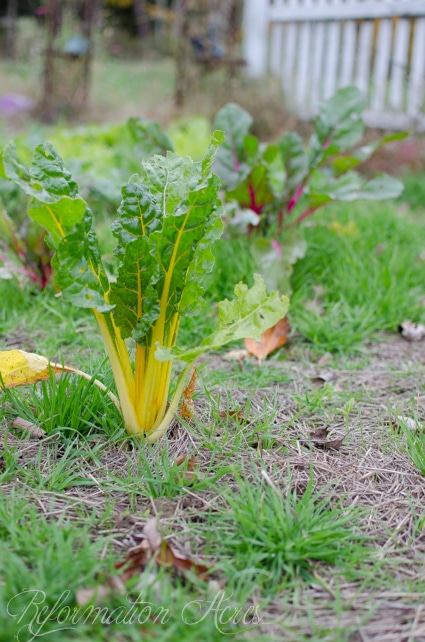 Too many radish sprouts… and direct seeded lettuces in the back. 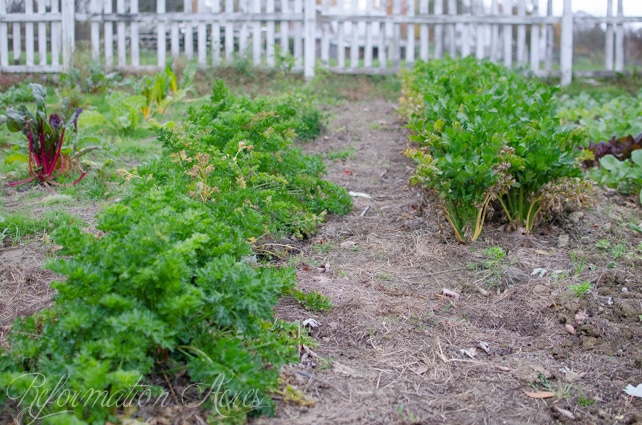 Cutting celery on the left. Utah 52 celery on the right. (I thought there’d be celeriac under the soil there. Nope. Does that form in the 2nd year? I tried googling these things, to no avail.) 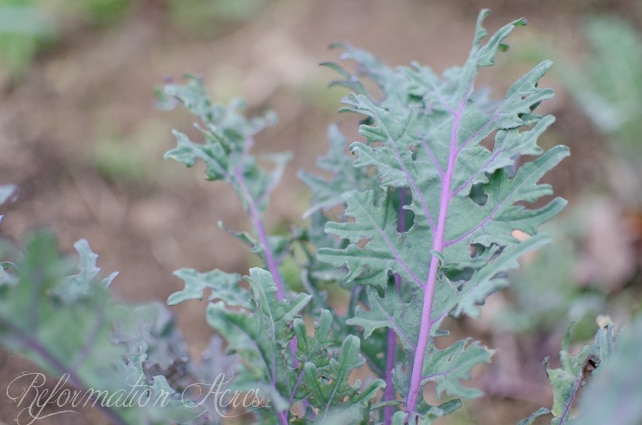 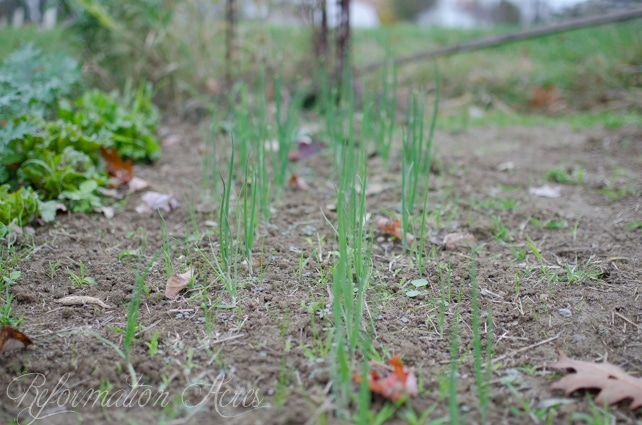 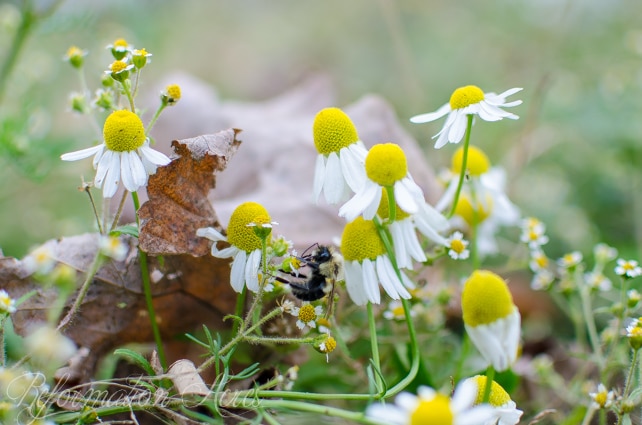 I found some chamomile that actually grew! I had given up! It’s just too bad it wasn’t enough to harvest. One cup of tea isn’t worth stealing from the bees. 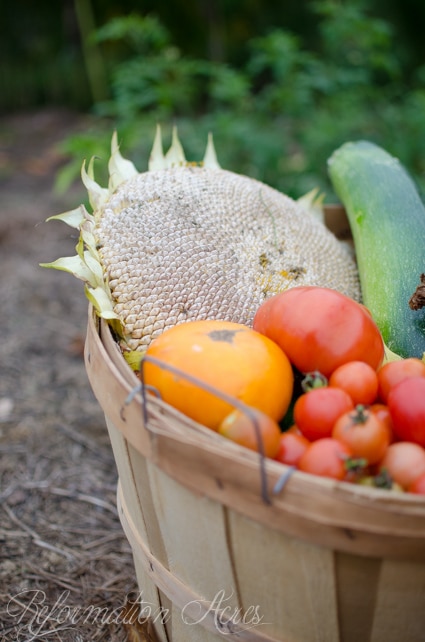 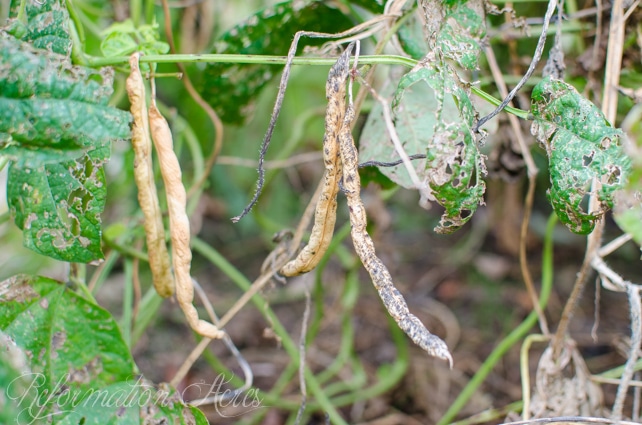 A few beans left for seed. There are many, many more, but they need to dry out some more before I clean up the bean trellises. 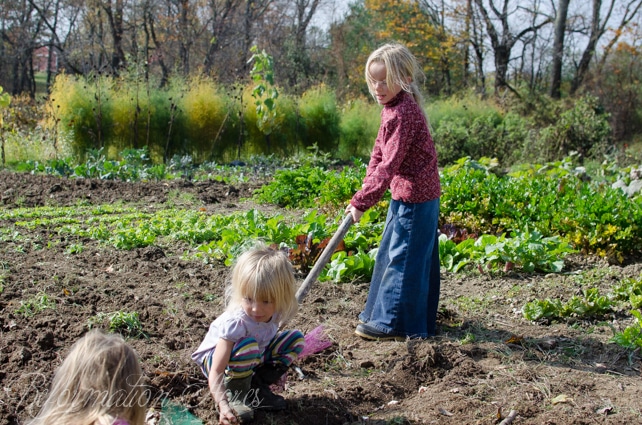 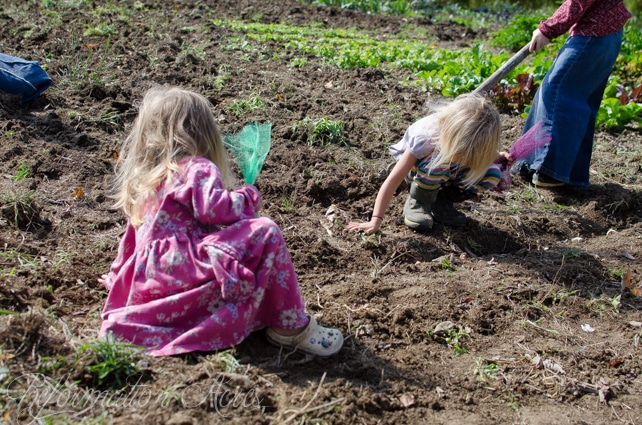 Planting garlic. I bought 3 times as much seed this year. Chet’s Italian, Vietnamese Red, & Chinese Pink. One of them should be ready much earlier than the others, so between that and the scapes, we won’t have to go quite as long without. ‘Cause we’re almost out of garlic already! As in only a couple more heads! It’s so interesting to me how much we’ve come to love garlic. A few years ago I planted 1 head, last year, 1 lb. and this year 3 lbs. Hopefully, that will be enough. Last year, I suspected we planted too early (10/8), so this year garlic planting was backed up a couple weeks. 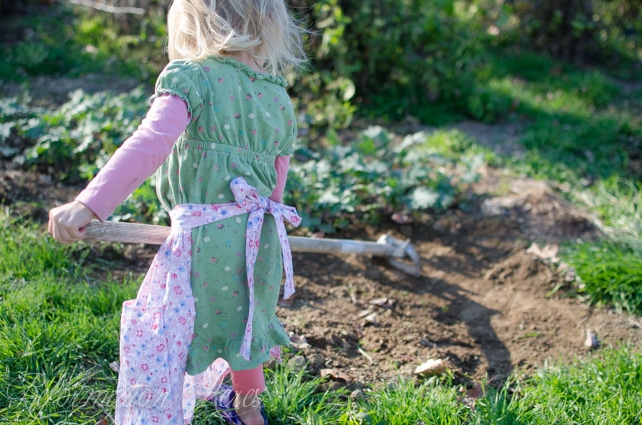 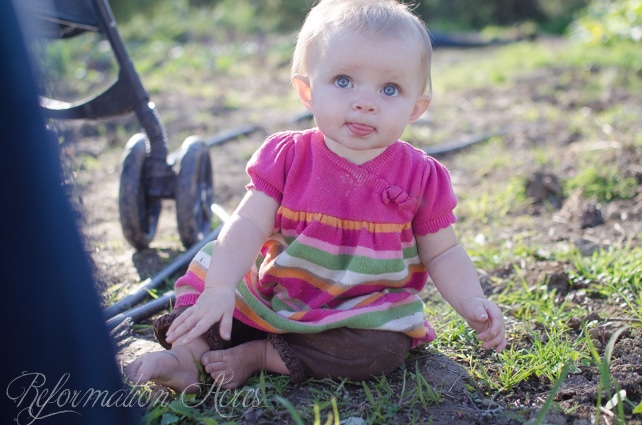 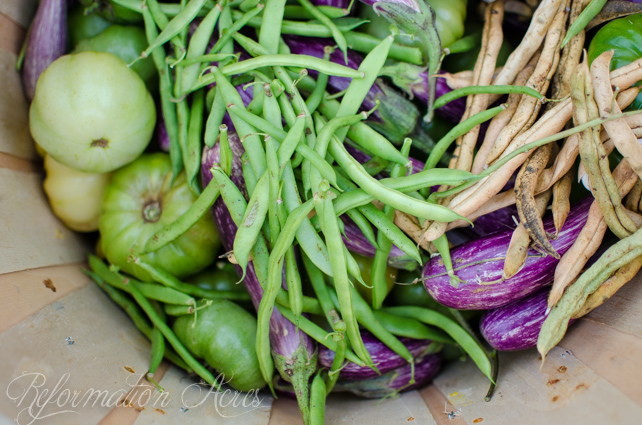 The final harvest basket from the summer gardens. This was gathered two days before the first frost which happened a little over a week ago. I roasted the Fairytale eggplant and froze it. The green beans went straight into lunch… and the green tomatoes… well there are lots of choices as to what to do with those. Like 65 choices to be exact.  I love that this variety of heirloom pole beans continues to bear all the way until frost! 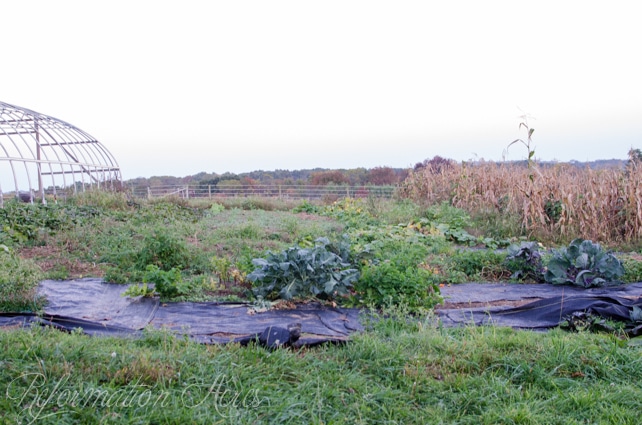 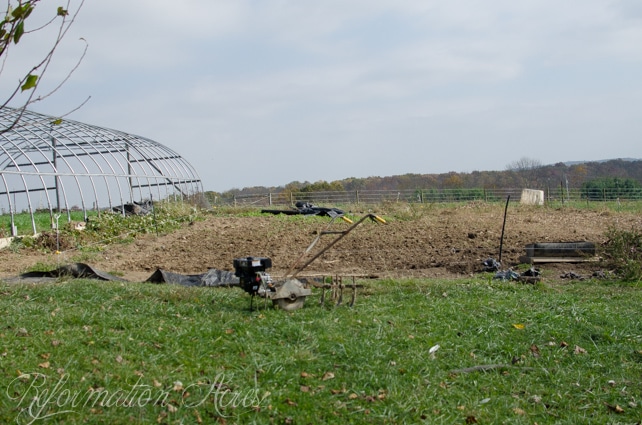 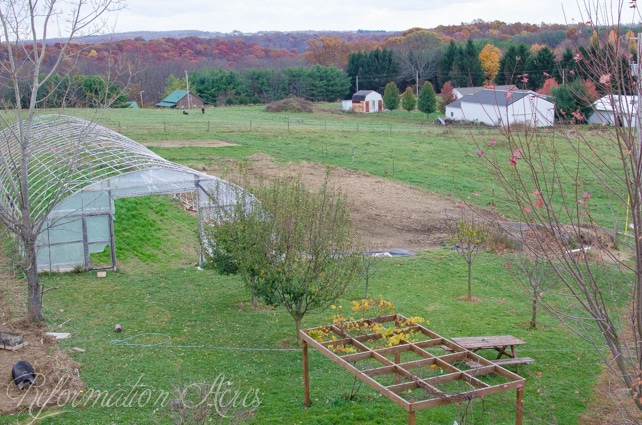 The pantry garden is all wrapped up for the winter. Everything has been plucked, pulled, and cleaned up. The pigs were put to the task of tidying up this garden and they did a wonderful job. 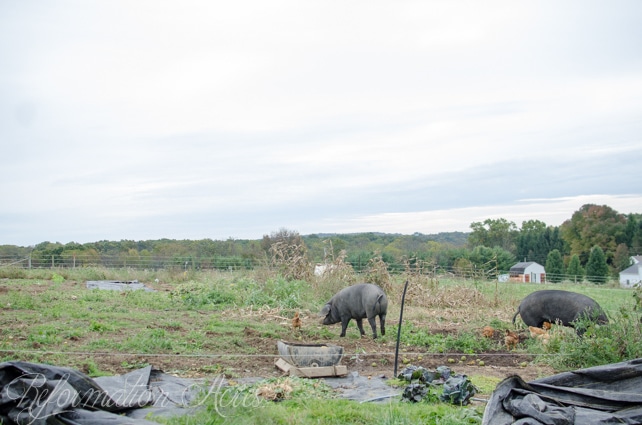 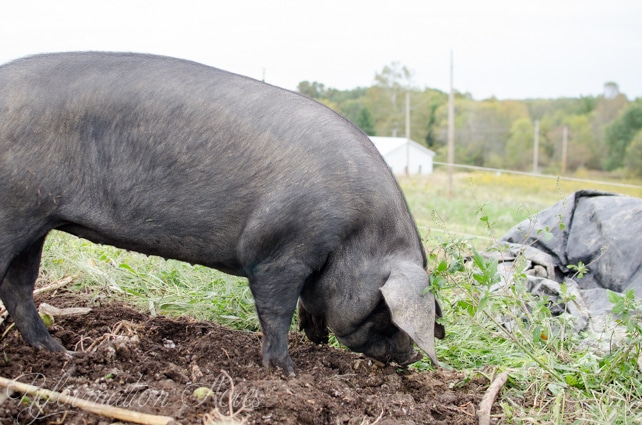 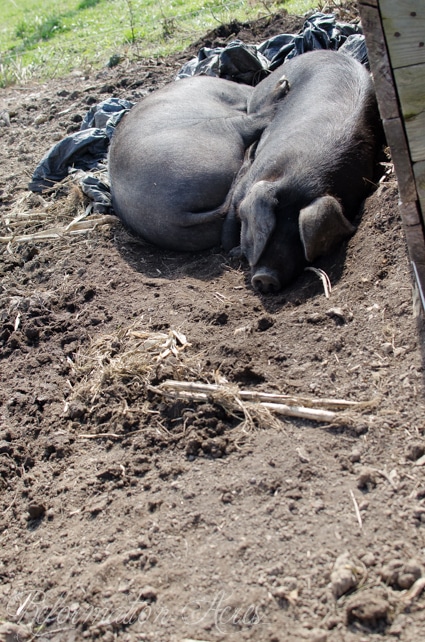 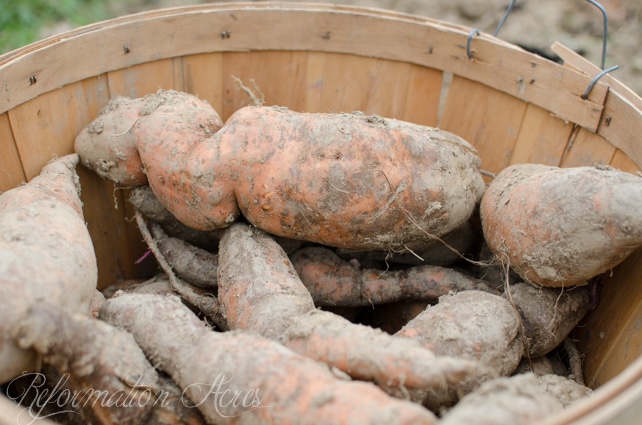 The sweet potatoes were hit and miss. One variety that did amazingly well was Centennial. The tubers were HUGE and perfect while all the others were really just getting started. We had our first meal with roasted sweet potatoes for a side the other day and they were utterly delicious. A perfect balance of sweet & earthy. 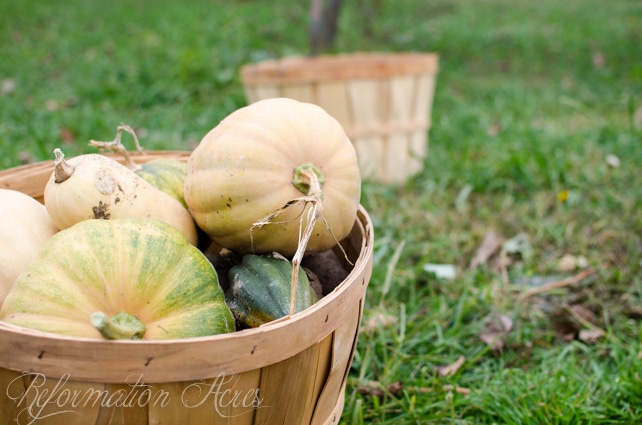 The rest of the final harvest in this garden consisted of some piddly acorn squash, underdeveloped pumpkins and a couple butternut squash. Oh and I forgot to mention an abysmal dent corn harvest. They were some ugly ears! I found only 4 that were fit to consider saving for seed from the whole plot. Considering the state of heirloom corn in America, I’m not pleased at all with my success… or lack thereof. If I’m going to make a go of establishing heirloom seed while there is still some to be found,  I need to take it very seriously and plant it and pollinate it myself!

We actually have decided this will be the last time this plot will grow vegetables. We are going to work to prepare the site for an expansion of the orchard and figure we can get 15-20 trees in that space. This fall we’ll cover it with hay mulch to protect it from running off and in the spring plant it probably with clover, yarrow, comfrey, etc… plants that will nurture the pollinator population. We’ll find a source and dump loads of wood chips trying to increase the fungal dominance in the soil as well and then in the fall plant some dormant fruit trees! It’s exciting to think about! 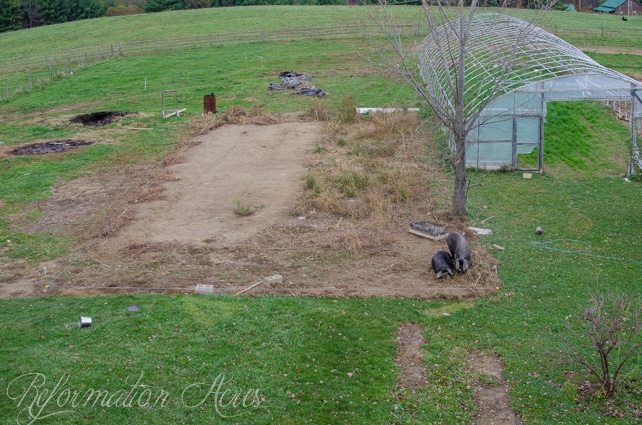 The pantry garden will get swapped over to the north side of the greenhouse in the space where the other greenhouse stood (Previous Owner came and picked it up, which thrills me for now I’ll have a better view of our glorious sunrises!) It will be pushed back farther to line up with the greenhouse so will be 3000 square feet. We thought the pigs would clean it up too, but they seem to only be interested in building a nest in that one corner and are making slow work of turning the soil. Perhaps they’re needing a little incentive in the form of corn?

•Don’t “grow weary” when it comes to planting heirloom corn. Even though seed sowing has been going on for weeks, I must do a faultless job at sowing it, keeping the chickens out of it, and hand pollinating it. Or be prepared to one day eat GMO corn or go without altogether. And I since I know I won’t be doing the former…. well then faultless it is.

•Notice, I didn’t make any mention of the 6 pounds of pea seed I planted for an overwintering trial? Yeah. That’s because the chickens ate them all and the rabbits topped the rest. Fencing. Fencing. Fencing MUST be in place next year. Even if it looks cheap because it is cheap.

•Don’t bother transplanting spinach. The only success I had was with direct sowing. And that wasn’t even that great, so sow heavily and thin heavily.

•Plant radishes a solid two weeks after the lettuce is planted. Otherwise the timing will be all wrong and there will be no radishes for salads.

•Brush  more of the dirt of the sweet potatoes before laying them on the floor of the root cellar to cure. Otherwise when the cat gets stuck in the house, he might confuse the dirt for his toilet.

« Your Questions: Can I Own a Dairy Cow (Or Goat) AND Still Have a Life?
Gleanings From November »