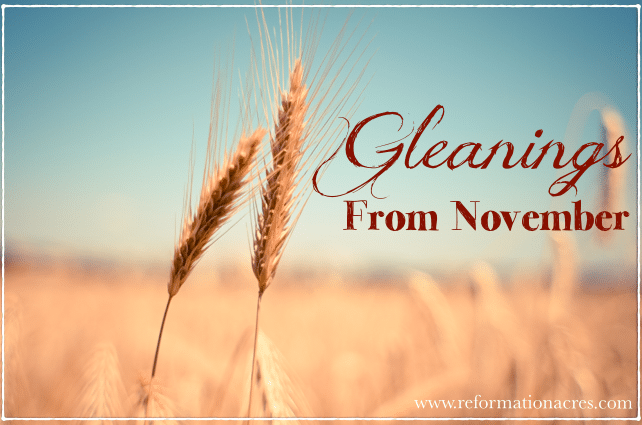 Hey, it’s been awhile since I did a “Gleanings” post, hasn’t it, so how about one today? In all honesty, I haven’t been reading much over the preservation season, which officially ended for us a couple weeks ago.

Gleanings is my monthly “link love” post where I share some of the interesting articles I’ve come across the past month.

•If King David Had an iPhone

Despite all that we’ve gained with fast-paced technology, I’m afraid much has been lost. Having the world of information in the palm of our hands, alerting us to every message, update and Tweet, tempting us to record each moment instead of live it, does something tragic to our creative side: it distracts it away.

Not only are we too distracted to create and produce meaningful things, we lose the very ability as the world of instant, fast and byte-sized, short-circuits the mental inertia and stamina great creations require.

•Why I Am A “Stay-At-Home-Evangelist”

It does not matter how many times we are told there are those outside who need Him; if we do not make sure our own children are taken care of, then we are sending out some wounded souls that may just turn their hearts against Him.

•Is Patriarchy Biblical? (video) Watch it. Amen it. Thank you Lord for this man.

• A Strong Agriculture, the Foundation of a Free and Independent Nation

It is no coincidence that the decline of our liberty, wealth and independence coincides with the decline of agriculture in the American republic. Those who ponder the loss of their freedom, the inability to make ends meet and growing influence of internationalism and creeping socialism would be wise to notice the crumbling barns and empty fields around them.

•7 Back-Doors to Learning for Tired Moms

Let’s face it; there are times when formal learning is just not possible (or desirable).

•A NEW ACT IN RAW MILK (IM) MORALITY PLAY, BROUGHT TO YOU BY AMERICA’S DAIRYLAND

Have you heard about the Wisconsin students who got sick after drinking raw milk?

Not surprisingly there is a lot more to the story than is being reported! Not only could it have been the chicken the parents had a difficult time cooking, BUT turns out, the raw milk wasn’t from a farm that produces raw milk for consumers but from a conventional dairy that dipped into their tank. I drink raw milk 3 times a day (at least) and would NEVER have drank THAT milk!

So the question is: Are we called to feed the world?

The answer for many may be a resounding yes but for the Christian the question is more involved as we are to look at what we are called to do as individual believers, the local church and as the larger body of Christ according to God’s word. We do not want to miss that the Bible does call us to care for the poor and hungry such as we see in Luke 14:13, Gal 2:10 and others. These passages speak to what individuals, or even the local church, are to do but is not a call for others, such as Governments, to force compliance and scripture also does not necessarily speak to what caring for the poor and hungry is too look like.

•Why I Told My Husband He Could Walk Away

I’ve seen a weight slowly lifted off of him the last few months that reassures me that he’s figuring it out. I have to admit I was worried about his feeling of identity if he walked away from what he’d built in the desert. But now I overhear him talking with other men at the inn and they are asking for his advice on how to get out of their own rat race and my heart swells. Men asking how he got the courage to step away from it all. He tells them how he reads with our daughter every night and helps with her homework. He tells them how he’s fallen in love with hobbies that don’t cost a thing. He tells them how spending time with his family gives him more joy than he ever felt in a high powered, high paying job.

Trust me, I don’t make my own lotion, bug repellent, sun block and chapstick because I’m bored. So why do I do it? Why do I grow our own produce, raise meat birds, milk a cow, make my own butter, cheese and laundry detergent? Because that’s what’s best for my family. Not your family. My family.

• Why I’m Not A Vegetarian: A Homesteader’s Perspective

Just PLEASE don’t be that person who just told me today that she feels sorry for the chickens, thinks she should be vegetarian, and then goes home and cooks up a commercially produced chicken that she didn’t have to see when it was alive. That is too hypocritical for me.