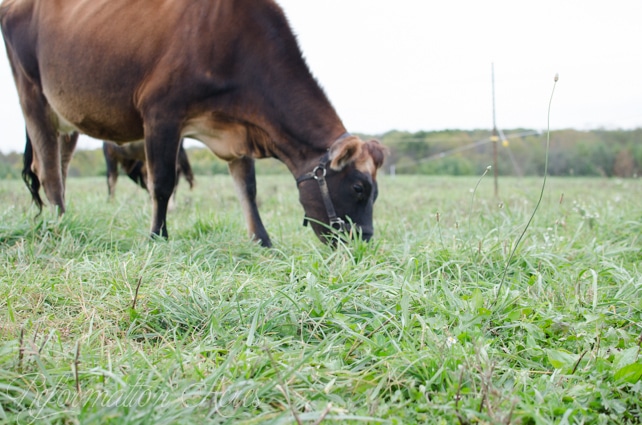 So you’ve been dreaming of a family milk cow. Raw milk. Cream. Butter. Cheese. Clanging milk pails. Cool morning sunrises. The sweet smell of hay. The works. So you bought a piece of land. And it’s big enough to finally bring your gal home and start living the dream. Congratulations!

But what if your small pasture is lousy? They use to run horses on it. It’s full of weeds. The budget’s tight and you can’t afford to reseed. It’s not raining much this year so the grass isn’t growing.

Does this description fit anyone besides myself?

We’ve been dealing with raising a family milk cow on poor quality pasture for many years now and while we’re finally implementing practices that have shown great improvement over the past year, we’re no where near where we’d like to be and it’s our job in the meanwhile to keep a close eye on our gals (for that family milk cow has turned into several) to make sure that their bodies are telling us they are fit and healthy.

The best way to do that is to evaluate their “body condition.”

Assessing body condition in dairy cattle is NOT the same as doing as in beef cattle. The frame and build of each type of cow is different and should not be compared to evaluate health. That’s like comparing a Greyhound to a Basset Hound because they’re both dogs. You’ll either end up with fat unhealthy Greyhounds or a poor Basset that is starving half to death.

It’s hard not to compare. Trust me, I know. Sometimes it’s us doing the comparing, sometimes it’s well-meaning family, friends, or readers. Dairy cows always look so bony, but that’s ok. Even when they are fat and over conditioned, they will still show some bones. Put your hands on those bones and you’ll realize they’re padded with fat!

Another thing to note as you observe and record the health of your milk cow through evaluating her body condition is that it will vary depending on where she is in her lactation. She should be looking her most fat and sassy just prior to giving birth. After she freshens and heads into peak lactation, her condition will begin to dip. By mid-lactation, if all goes well, she should be bred and will begin to start packing on the LB’s. And then you’ll dry her off a couple months before calving and she’ll be right back at fat and sassy again. So it fluctuates. What you don’t want to see is the body condition at any point dropping below a 2.5. Frankly, I’ve noticed I start to feel worried around a 3, but then I remember I’m not looking at Maybelle anymore. (She was our old Dexter, a dual-purpose breed that doesn’t have the same bony frame of a Jersey.)

After reviewing several charts and diagrams on the internet, I feel like this one is the most helpful for a beginner. With it, let’s evaluate the gals we’re currently blessed to be milking morning and evening, shall we? 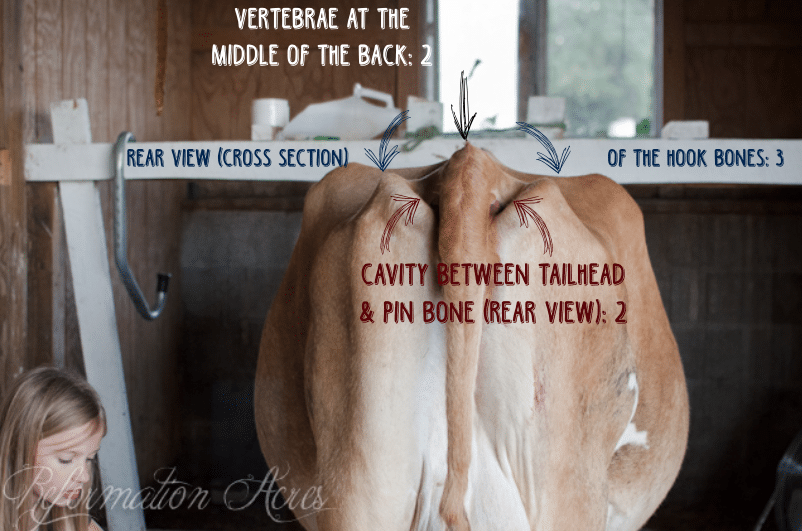 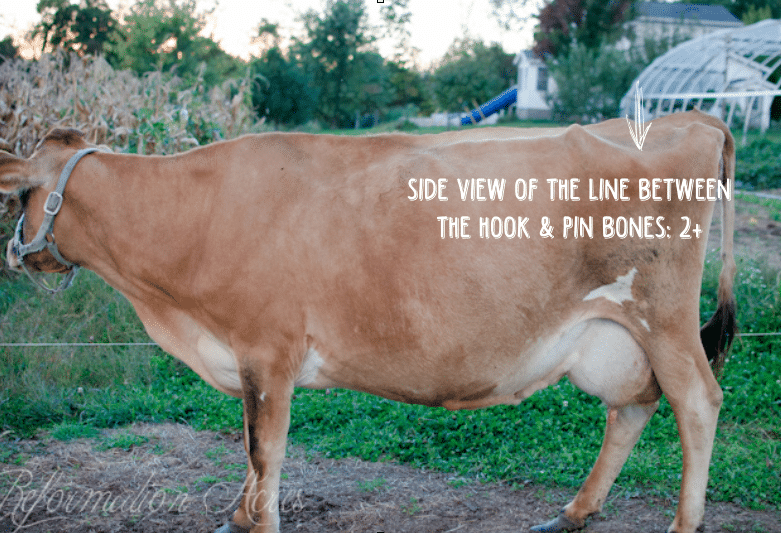 First up is Holly. She’s our main family milk cow. A 6 year old cull cow from an organic dairy farm. We got a sweet deal on her and were in desperate need of a lactating cow to nurse the calf born last year when the little heifer’s mama, Maybelle, died the day after she was born.

Holly freshened the last week of March, about 6 months ago. Sadly, she is NOT bred though the AI tech has been out to visit a couple times over the last few months.

While she looks much better than she did last year, she doesn’t look as good as she did a couple months ago and her condition might be continuing to slip. As we leave green grass season, will it get worse? Could this be why she isn’t getting bred back? The 2nd photo I think isn’t quite showing her boniness really well. It was taken at dusk and is shadowing that side.  Here’s a different angle… Again, not horrible, but not great either. 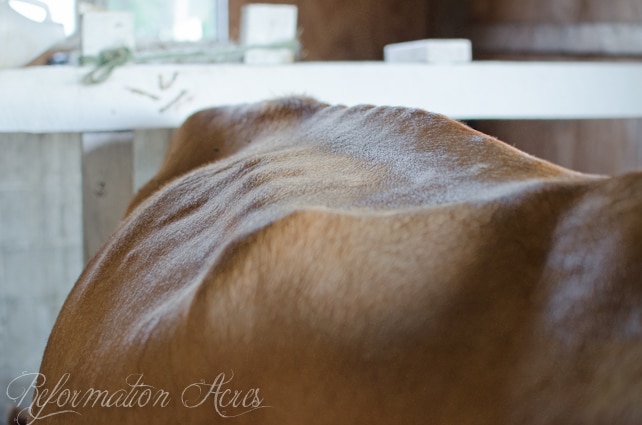 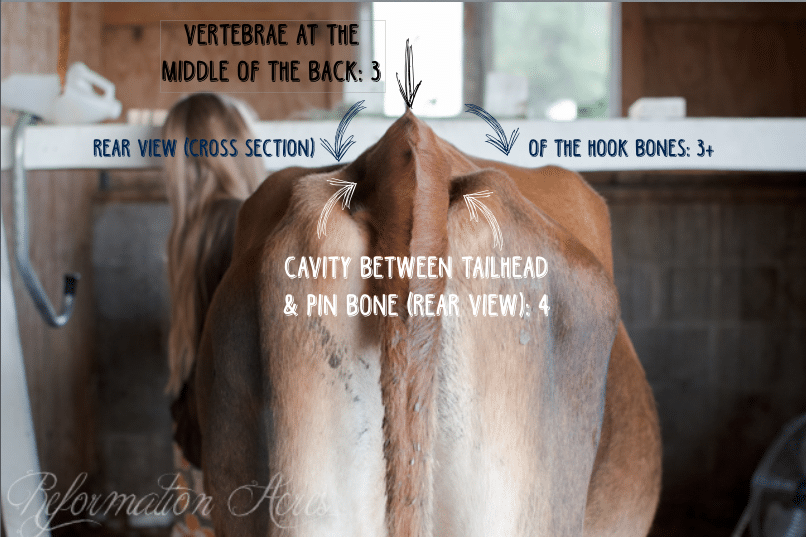 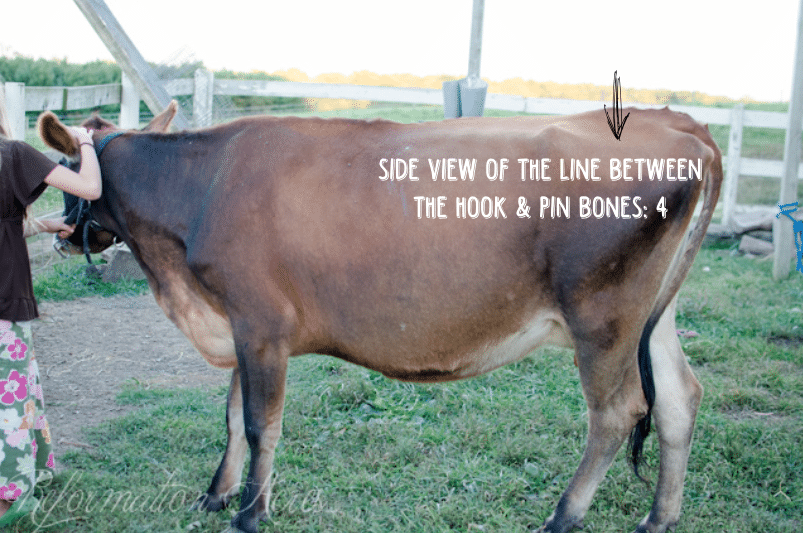 Stella is one pretty gal. (And she’s a sweetheart too.) She had her first calf this year, not sure exactly when, but it’s probably 6+ months ago. She’s probably about 2 1/2 years old.  It took 2 tries, but her second AI took and she’s going to calve in early June. 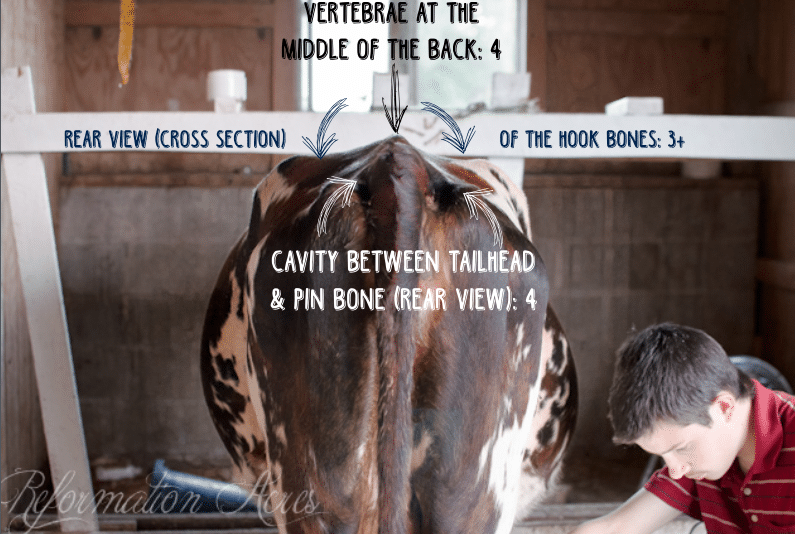 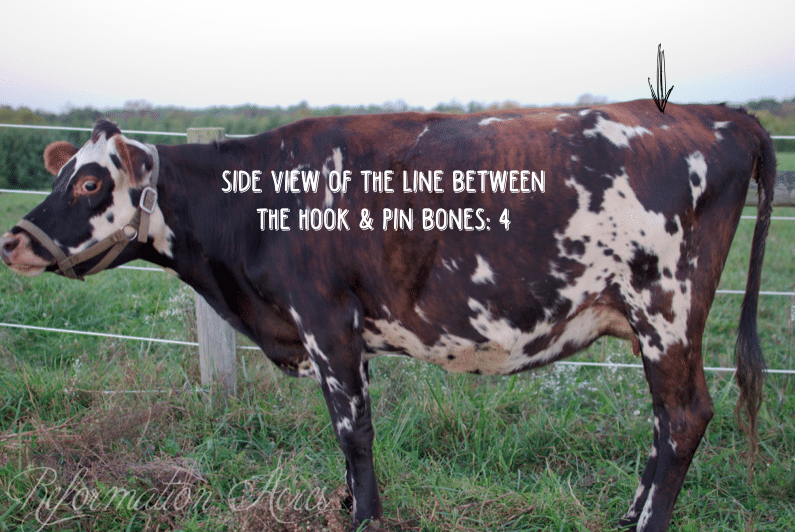 I think it’s a little harder to see how Candy is doing because of her stunningly beautiful coat. Candy is about the same age as Stella and had a calf around the same time, but her calf died. She’s smaller framed than the rest of our cows.  She is NOT bred, but that’s our fault. After a very demonstrative first heat cycle after coming to our farm, we didn’t observe any other symptoms of her going into heat after that. The blood tests don’t lie and so it turns out we were wrong and were missing the signs the last few months. We caught them this week (barely) and she had another visit from the AI tech earlier this week. Anyway, all things considered, we’re happy with the way Candy looks. 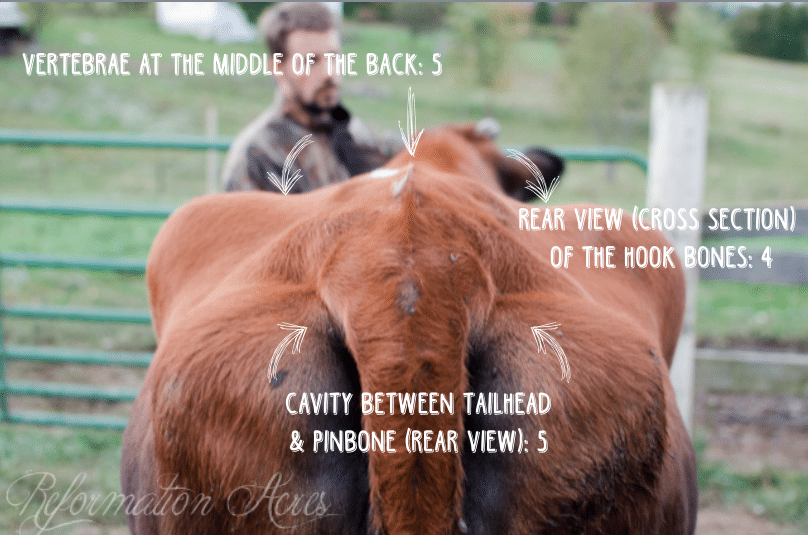 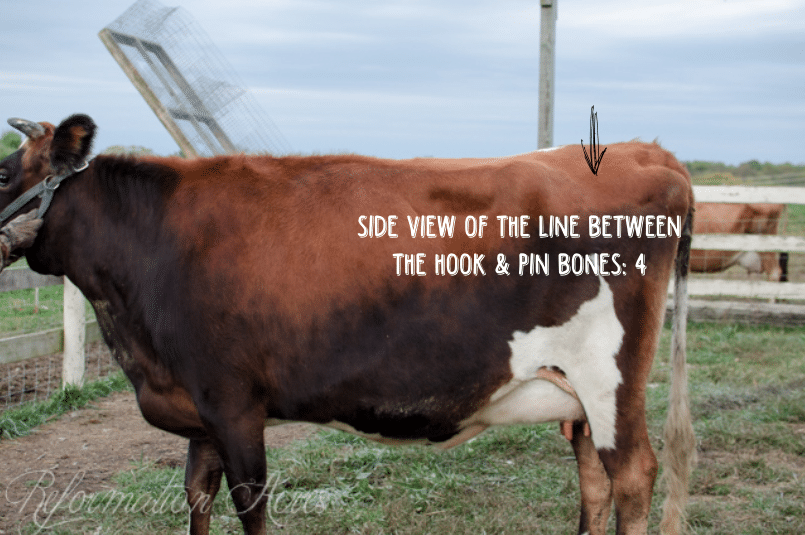 You haven’t met “Big Bertha” before. In fact that’s not even her real name. We’re cow-sitting for a friend for a while and she has given me permission to discuss “Big Bertha’s” body condition for this post. By her assumed nickname, you may have gathered that “Big Bertha” is a big girl. She makes Holly look so short and Candy look like a yearling!

“Big Bertha” is about 3 years old and calved for the first time this month as opposed to the rest of our gals who are in the middle of their lactation. “Big Bertha”, like all new moms, is… well there’s no way to say this delicately… carrying some extra weight.

As we go into the winter, she’ll lose some of it because of the change in diet that comes when the green grass dies and because she’s giving of herself to the milk bucket. Hopefully, she will, like all good milk cows except mine do, get pregnant and at that time she should start packing on the pounds again.

Anyway, you can see even without a chart, that “Big Bertha” has a solid covering of flesh over her hook bones and short ribs. Because of what point she is in her lactation, we don’t want Holly to be this fatty. After all, she isn’t a beef cow and shouldn’t look like one.

All things considered, it looks like Holly is needing some TLC. We’re quite happy with the way Stella and Candy look and hope to keep it that way.  Holly’s condition will need to be improved until she looks more like her pasture mates. I’ll address the issue of our game plan in my next post. 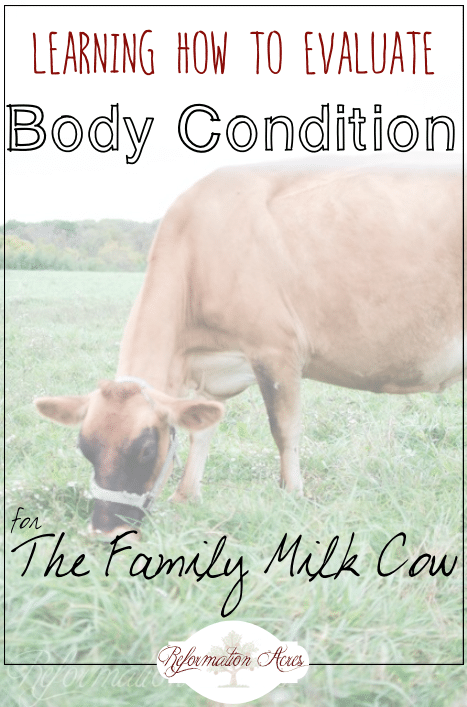