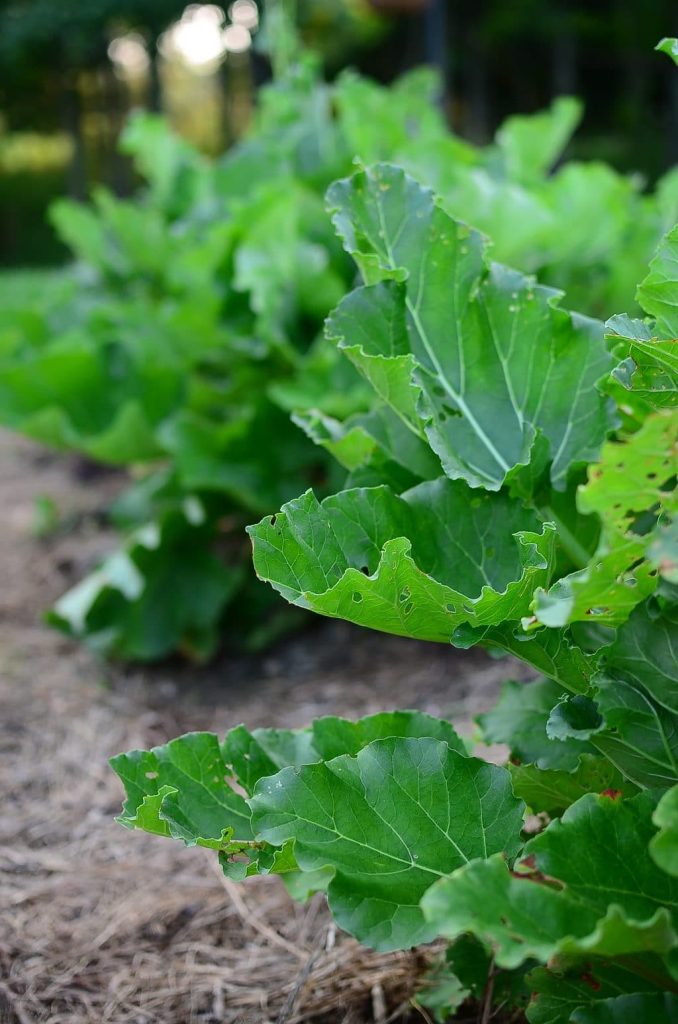 When it’s either you or them, get rid of the bad bugs in your garden with an organic Rhubarb Leaf Pesticide Spray.

Normally, I’m the kind of gal who likes to take a whole “wait and see” approach. I don’t like to meddle in the garden and I like to see if the good bugs and birds in the garden will come to my rescue, save the day, kill the bad bugs, and I get to walk off with all the spoil. Harvest. Spoil. Same, same. But not a spoiled harvest. That’s not the same.

Anyway, I’m waking up bright and early (nearly) every morning and heading out to the garden before the sun hits it full on. I’m talking 6-6:30 early. Since Jared is sitting on my side of the milk bucket then, I’m at liberty to do that. (Or sleep in. It’s a tough decision, and most days, rising early wins.) 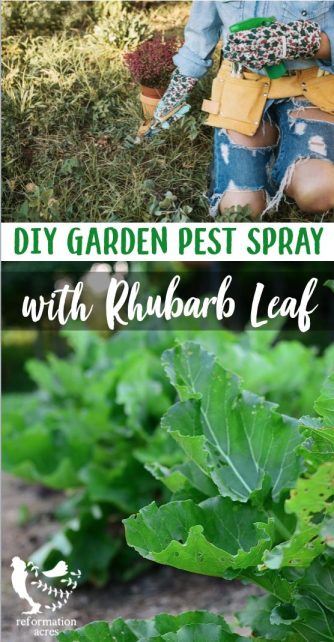 While I’m waiting for the good bugs to come to my rescue, I have to help myself out a bit and wage my own little skirmish with the garden bugs. In this case a squash beetle or two, I saw one squash vine borer this morning, but mostly it’s those beautifully ugly little striped or spotted cucumber beetles I’m after.

I’ve noticed after years of fighting, (yeah, I’m slow) that they are a bit on the sluggish side before the sun hits them. That or they are engaged in acts of reproductivity. It’s then that I’m able to seize the moment and squish the living daylights out of them. What a way to wake up.

For both them and me.

This morning when I went out there, I realized something though.

Every day there is one more plant lost to wilt.

It kills me to pull them. I see the baby vegetables forming! But I know that if I leave them the disease the beetles are carrying, bacterial wilt,  will be more easily spread.

If I keep losing plants at this rate, there will be none left in a week and a half and with the first summer squash ready to be harvested maybe tomorrow, that makes for one lousy yield. Now we can’t have that, can we? 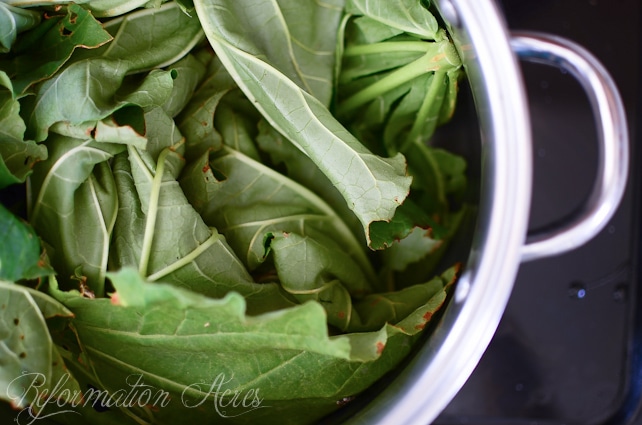 So I made the difficult decision to try making an all-natural, organic pesticide. With the scraps from yesterday’s dessert of Ginger Spiced Rhubarb Custard (Which was ridiculously decadent. I ate two.) I brewed up a batch of Rhubarb Leaf Pesticide Spray.

1.) Add the rhubarb leaves to a stockpot

5.) Skim off the leaves and sediment. It’s probably best to do it with a funnel and some cheesecloth.

6.) Add to your spray bottle and dilute it. I did a ratio of 1 part rhubarb leaf liquid to 2 parts water.

7.) Spray the leaves of the insect-ravaged plant.

How to Use Rhubarb Leaf Pesticide Spray

Since pesticides kill indiscriminately, I chose to do this in the evening just before the sun went down. I can still see. The beetles are still out and about, but the bees and other pollinators have gone home for the night.

I wouldn’t spray this on vegetables just before harvest. I mean, I doubt it would kill you, but you’re not supposed to eat rhubarb leaves because they are poisonous. That’s the part you’re taking advantage of here. We’re hoping the insects will get it on them, munch on the leaves a bit, and die. (Cue the sinister laughter.) Not you.

I wish I didn’t have to resort to using Rhubarb Leaf Pesticide Spray, even though it is as organic as a pesticide can get. I hate knowing that there are going to be innocent casualties in this battle for my food, but in the end, I’ve got a family to feed and I can’t handle any more than this lousy gardening year has already turned out to be.