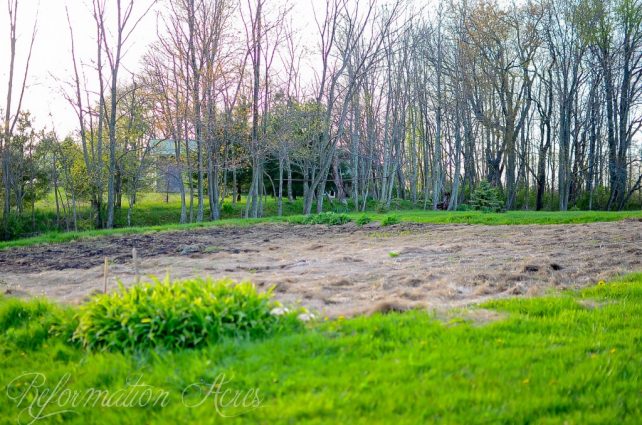 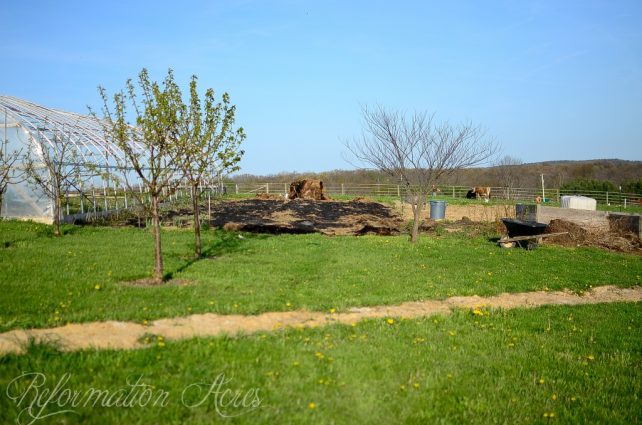 May was a depressing month to be in our gardens.

The first real month into the 2014 growing year and already we’ve had 5 crop failures.

Is that everything? Yeah. Pretty much. And THIS is what I’ve been looking forward to all winter? Sorry for being so down, but the potato troubles were just fully realized today and we planted  a LOT of potatoes.

My general attitude is one of  liking the animal husbandry side of homesteading a whole lot better than gardening right now. Maybe because it feels like I have more control? There is less that could go wrong? Honestly, we’ve been throwing around the possibility of the only way we could make a go of a family economy off of such a small piece of land might be in market gardening and this is less than encouraging to say the least.

So how have our garden plans been such a bust? Let me tell you. And let’s start with the soil. 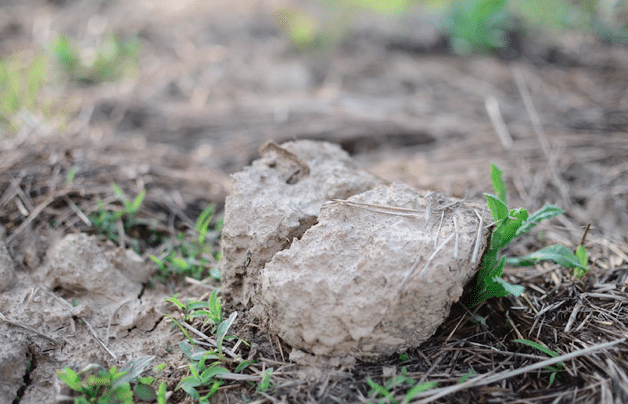 The beautiful soil we discovered upon moving in- so beautiful and full of air it sunk beneath your feet even in July, must have been being tilled, tilled, tilled to make it that way because it’s actually hard as a rock, heavy clay. We’re using an antique “Chore Master” cultivator because we sold the rototiller last  year in our zealous commitment to go no-till. It’s at least tearing up the top few inches of ground to make it somewhat workable.

You’d think this would have us searching ads for a used tiller to help things along, but no. We’re stubborn and now more determined than ever to see this no-till thing through since our main troubles are caused by tillage.

•Hay mulching has shown a significant improvement in whether the soil gets hard on top, but isn’t helping warm things up and with the over-saturation. We’ll continue with it knowing it will help in the long run. 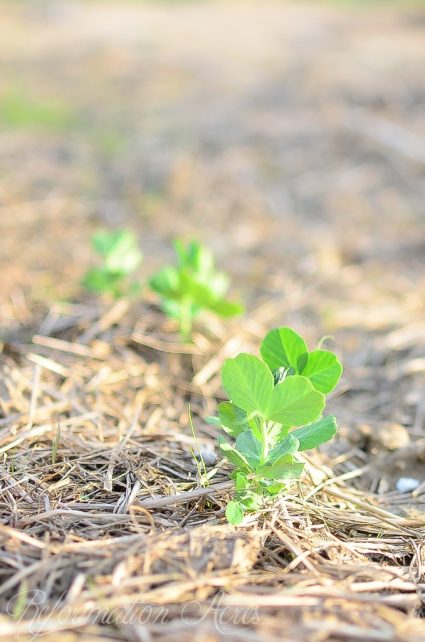 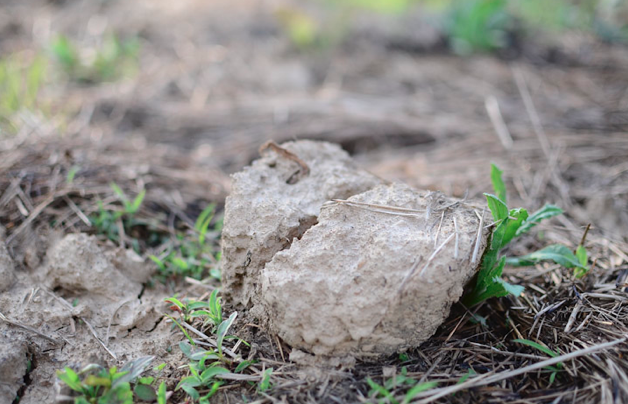 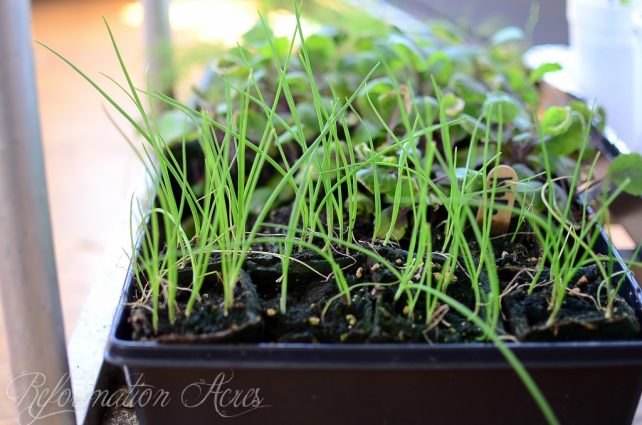 An exceedingly soggy April delayed hardening off. Having unofficially renamed our homestead “Hurricane Hill” it was a double challenge to set them outside for any amount of time even on the not-so-windy days.  I put them out when I could, but in some cases it was too much. Lots of broken tomatoes. All the seedlings were drying out faster than I could water them.

The last possible week a hoop house was finally made, but by then the tomatoes were already too leggy and kept falling over and impossibly dried out.

•I’m going to really need to be on top of this next year and have better systems in place. I didn’t realize what a cushy situation the seedlings had at the last place for hardening with the covered front porch and all.

•We’re also going to need a lot more room for starting seedlings next year if we really want to do this well. Enough for breathing room for tomatoes because their leaves stick to one another like velcro if they touch and it’s such a hassle to continually be pulling them apart. And enough room for making plugs to start greens like lettuce and chard. 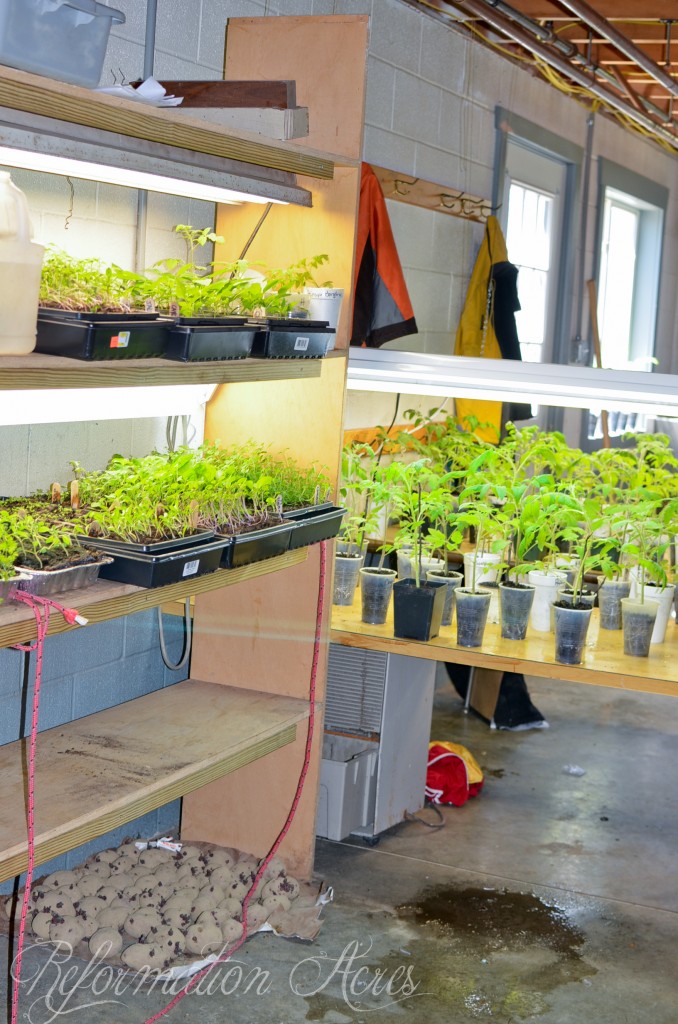 It has been one.wet.year. In April we had OVER 7 inches of rain!! Really, I’m thankful for living in such a climate where moisture is abundant, but it did make for some challenging gardening and contributed to most of the crop failures. It was just too wet and all that moisture also didn’t allow for the soil to warm up well. I know the peas probably rotted in the ground and the 10 or so that managed to somehow survive will produce a novelty meal or two this year, but not enough to put a dent into food production for a large family.

While I was finally able to grow spinach from seed in trays, after transplanting, another cluster of rainy days settled over us and all the leaves yellowed and have since been stunted.

For pities sake, even the radishes did poorly. And if there is one easy growing seed, it’s a radish!

•Measure clay content in each garden. The Kitchen Garden visibly has heavy clay, but I’d like to measure both so we can gauge improvement over time.

•Install drainage since clay doesn’t allow for good drainage… Collect the water beneath the growing areas? That would be nice for the ducks to splash in and provide a convenient habitat for the toads I’d like to keep nearby to help with pest control.

•Amend soil with a high calcium lime in order to break up the clay (which is indicative of high magnesium contents). 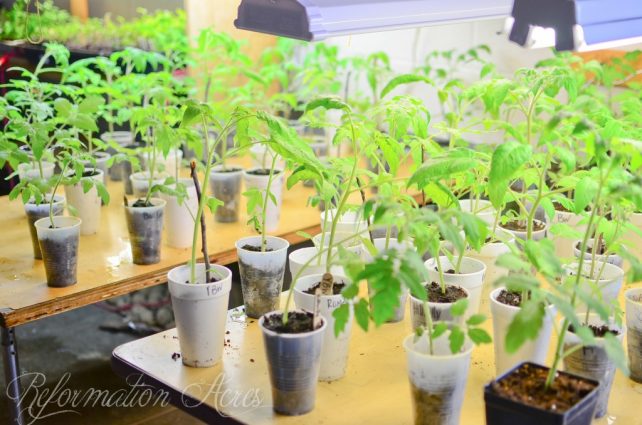 Well darned if I can find the photo now, but I had one where you could see a beautiful carpet of green over the whole garden, except upon closer inspection there was nothing beautiful about it because it was all thistle.

I’m not sure where we got it from but we tried a trick where if you flame weed thistle 3 times after it emerges it will die. Well, that’s a lie.

So after poking around and learning that even Round Up (as though I’d ever use it!) is less than effective at eradicating the nasty weed, I found this study (defunct link). It was very interesting and based upon it, I formed an aggressive plan of attack whereby after a soaking rain shower (and there were many days for me to choose from) the thistle would be hand weeded and then the hole where the root was would be sprayed with a diluted solution of vinegar, clove essential oil, and orange essential oil. (Those links are some good prices for the oils- They make we want to puke a little bit thinking about how much I paid for a quarter of the amount after driving around for hours looking for somewhere that sells them all the while with little girls in the backseat telling me they were going to pee their pants.)

So did the plan work? Yes & No. And I’m not sure which part was effective.

If the plant was broken off at the top and the root was left in the ground and then sprayed into the core of the root, it DID end up growing back even though that top piece appeared to be dead and rotting. If you dug up that dead-ish piece a week later, you could see a green-yellow shoot forming.

If the root was removed from the soil as completely as possible and then sprayed down into the empty hole, those plants seem to have not come back yet, however I can’t be certain at this point if it was the spray or the pulling of the root that was effective. I have a small test plot I’m still watching.

So while the thistle isn’t eradicated yet, we’re showing slight improvements.

•As per the study, continue to hand-pull emerging thistle while the ground is wet for two years. Don’t let it go longer than two weeks between weeding during the growing season. 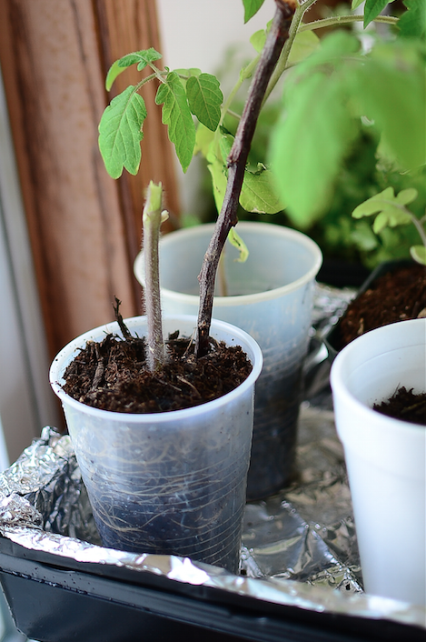 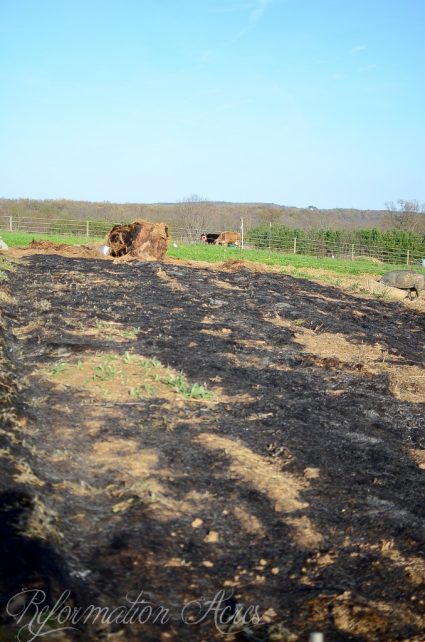 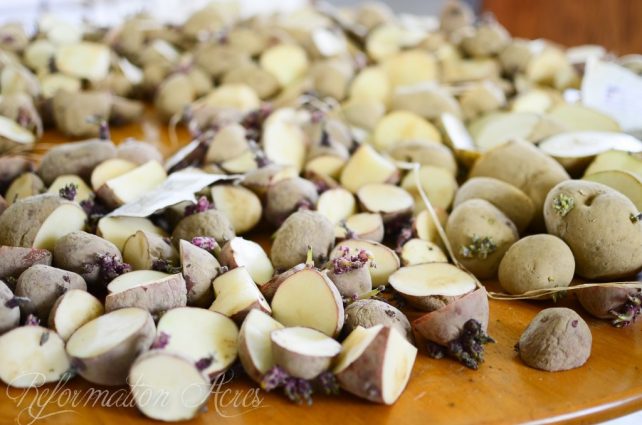 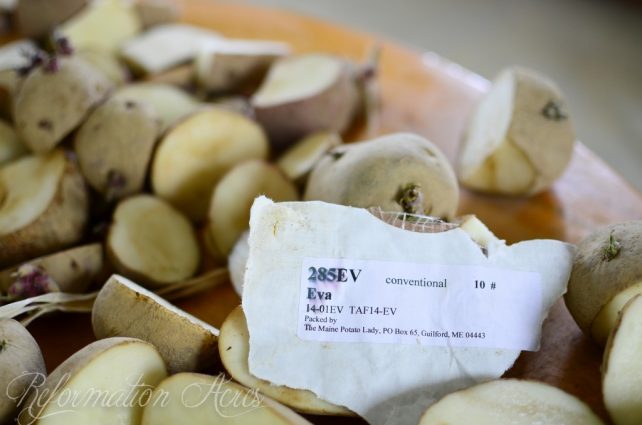 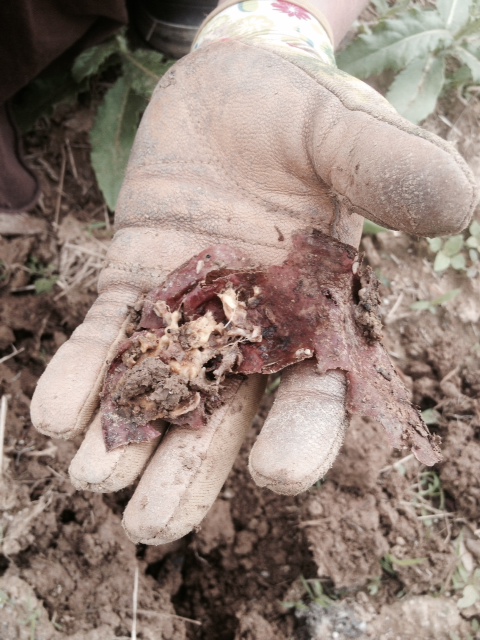 This is what 40# of high quality seed potatoes look like. Chitted, healed for probably not long enough, planted later than when everyone else was planting them by about 10 days and then after waiting for a couple weeks for them to all come up.

We went searching today only to find skins left where there were the seed potatoes. This is totally not the fault of the potato company or any indication of the quality of their stock. Something got into them and completely ate out the flesh and left the skin. My gut says maggots (corn seed maggots?) There was a little whitish worm on this one. I don’t think it was rot either. Why wouldn’t the skin rot too? I’ve seen potatoes sit in the ground for a shockingly long time without rotting. I can’t imagine they’s rot away to nothing in less than a month?? But what do I know? It could have been rot.

•Possibly run the chickens through the prospective potato patch in a tractor (whether they like it or not to clean up bugs prior to planting.

•Consider the feasibility of container system on such a large scale.

•Delay planting by another week or two (IGNORE WHAT EVERYONE ELSE IS DOING!) 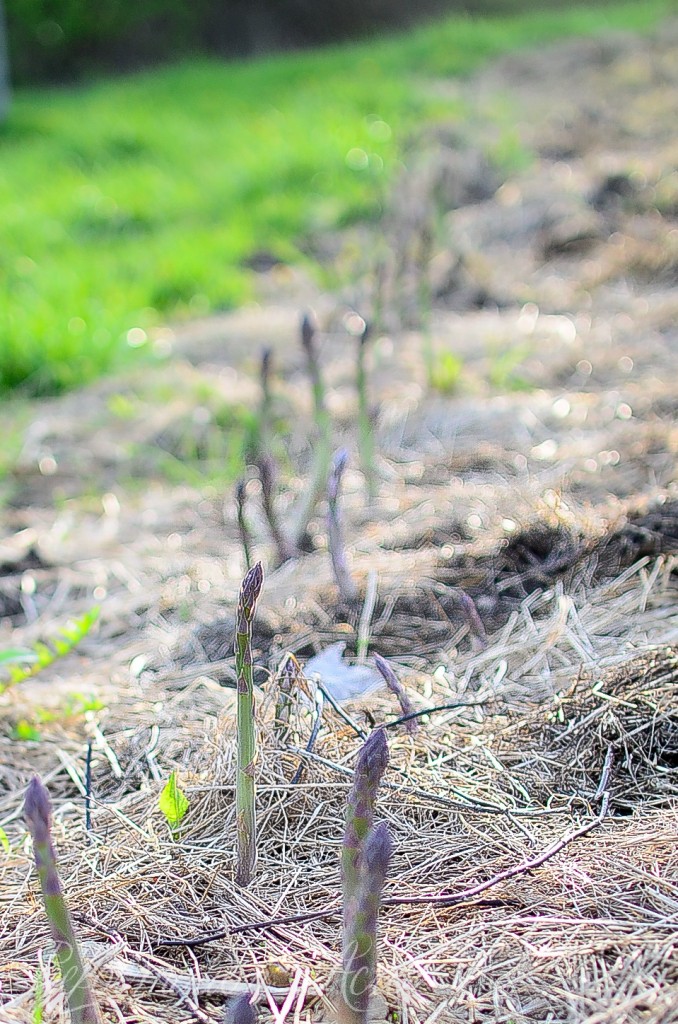 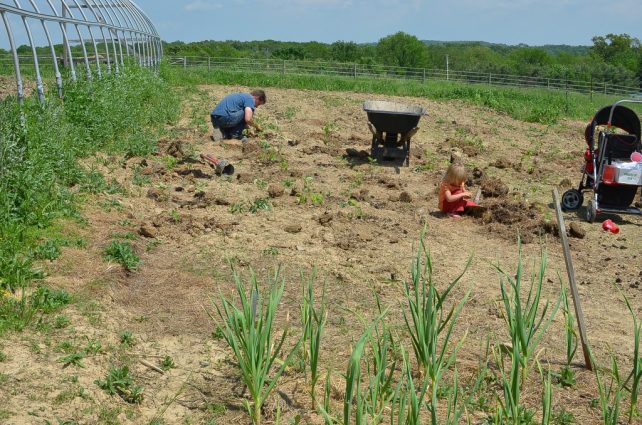 Looking on the bright side, the asparagus is doing well and it turns out we like rhubarb when I wasn’t sure if we would. Tomatoes are finally planted and only a couple died so far, peppers and celery are in, so is eggplant although it’s being decimated by flea beetles. I planted the sweet potatoes today. I need to weed the onions and find if there are still any there. The cabbageworms haven’t found their host yet and the cucumber seeds are nestled into the soil waiting, waiting.

There are still a lot of seeds left to go in. I’m trying real hard to be patient. It’s still raining often and though we’ve had some hot days, I’d rather be safe than sorry, especially with my heirloom corn. If the rain stops and the ground dries it will all be said and done this week and we will start working on weeding and mulching.

Whatever happens, being the stubborn lot of folks we are, we just keep plugging away. So until next month…

May your your gardens be growing more promisingly than ours our!!