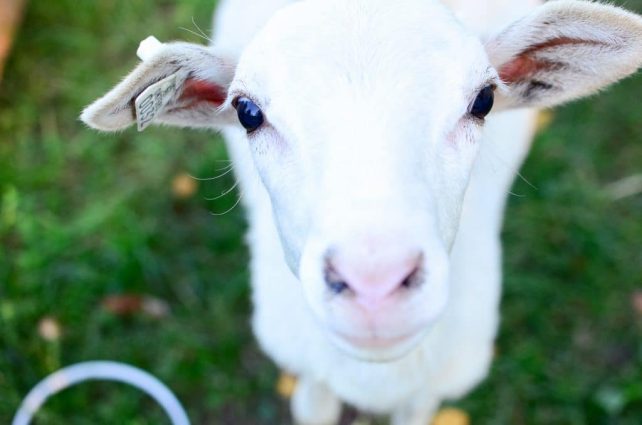 We are now working to improve our homestead pasture management with sheep. They help control weeds, add fertility, and more!

I didn’t see this coming either.

But we now own four sheep.

I mean, I kind of saw it coming. After all I did suggest when our lawn mower broke a few weeks ago that sheep would be a great alternative to a gasoline powered mower. But the advice was rejected (as well as the follow-up advice to get each of the bigger kids a reel mower.) He’s paying for that now with extreme grass allergies that take almost as long to recover from as it does for the grass to grow back before the cycle begins again.

A few months ago, I even threw around the idea of getting a few East Friesan sheep, a dairy breed, and milking them for yogurt or soap making or something. They’re hard to come by it turns out and a cross-country drive was out of the question.

So it’s not like the word “sheep” had never been mentioned before in connection with our ownership of them.

But it has become quite apparent that our tiny little herd of cattle aren’t able to keep up with the grass in the pasture, it’s growing so fast.

WAIT… Did I just say we have *too much* pasture grass!?!! Things I never dreamed would be a “problem” a few years ago! 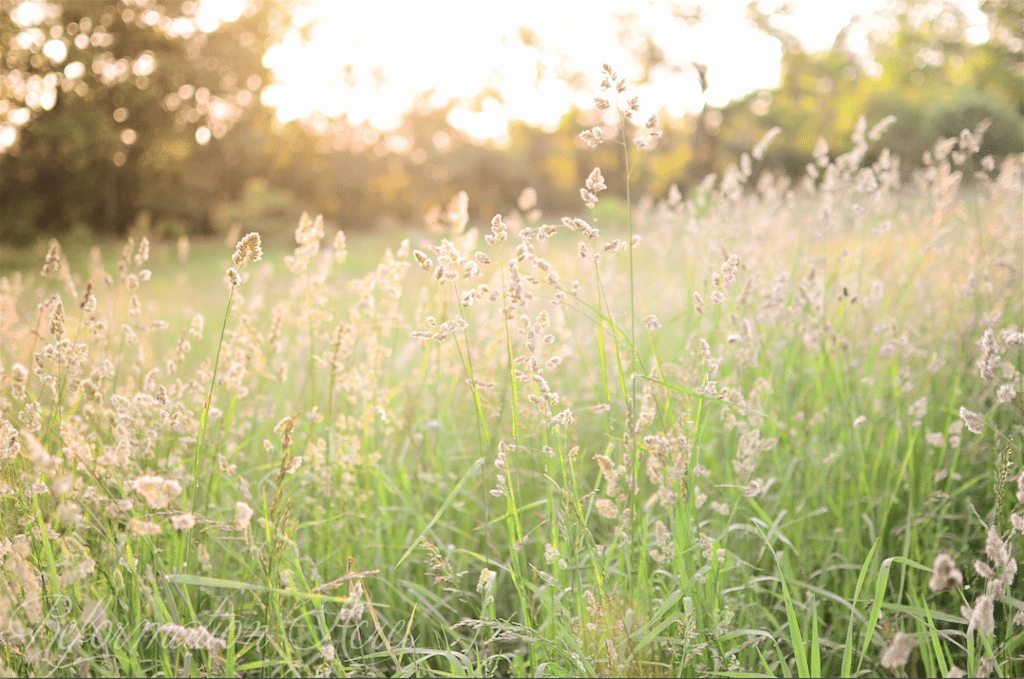 But a problem it has become. The grass, over five feet tall, and full of weeds, has gone to seed and is starting to lie down.

It’s my understanding that because it wasn’t topped off yet and because it has gone to seed, the grass will not grow back as lush as would be beneficial to the cows going into the hot summer months.

When we turn the cows out into a fresh paddock, they aren’t getting as much to eat because of that… and soon those weeds will start spreading their seeds everywhere. And sadly, all that is left standing when the cows move on are those weeds.

I’ve been reading All Flesh is Grass by Gene Logsdon. It’s excellent. An easy, engaging read and it makes me want a hundred acres and to be a Grazier. Anyway, in it he talks here and there about pasturing grass-fed sheep year-round and the more I read aloud to my husband, the more interested we became.  Sheep could be one solution to our overgrown & weed problem in the pasture.

So could what Mr. Logsdon calls “clipping.” Going in behind the cattle and mowing what’s left standing down. Despite his extreme grass allergies, my husband thought this a better solution than allowing an animal or two (or four) do the work for us. After watching him go through the pasture wasting both an entire evening and money on fuel, he later came in sneezing, coughing, and snorting and told me to find some sheep.

After much discussion over the past week or two, and a bit of hasty research, I settled on waiting for some Cheviots to pop up for sale.

I chose this breed for a few reasons.  I suppose since we were mainly looking for a Pasture Fertilizing Lawn Mower, we wouldn’t need to breed the sheep and therefore Any-Ole-Sheep would do, but if there is more than one purpose for the animal on the homestead, we might as well use that to our advantage. With sheep that’s meat, wool, or milk.

I feel like we’ve pretty much got the milk and meat thing covered. And as a Pasture Fertilizing Lawn Mower, these sheep are furthering our home-based dairy production goals. Besides as I already mentioned dairy sheep are super hard to come by.

On the meaty side of the argument, we’ve never really eaten lamb and didn’t want to count on it in case we didn’t like it. Even though the increasingly popular hair sheep would mean we wouldn’t have to learn to shear wool because they shed instead of needing shorn, their primary purpose is for meat. It’s supposed to be good meat because the lanolin doesn’t taint the flavor and even though we wouldn’t be eating it ourselves, we could always market the lambs. But after considering to whom lambs are primarily marketed, we decided that, as Christians, we weren’t necessarily comfortable growing a product that would be used in the religious ceremonies of those worshipping a false god. I mean from an evangelistic standpoint, wouldn’t we be wanting to witness ourselves right out of business? Seems like a pretty lousy business model to me. 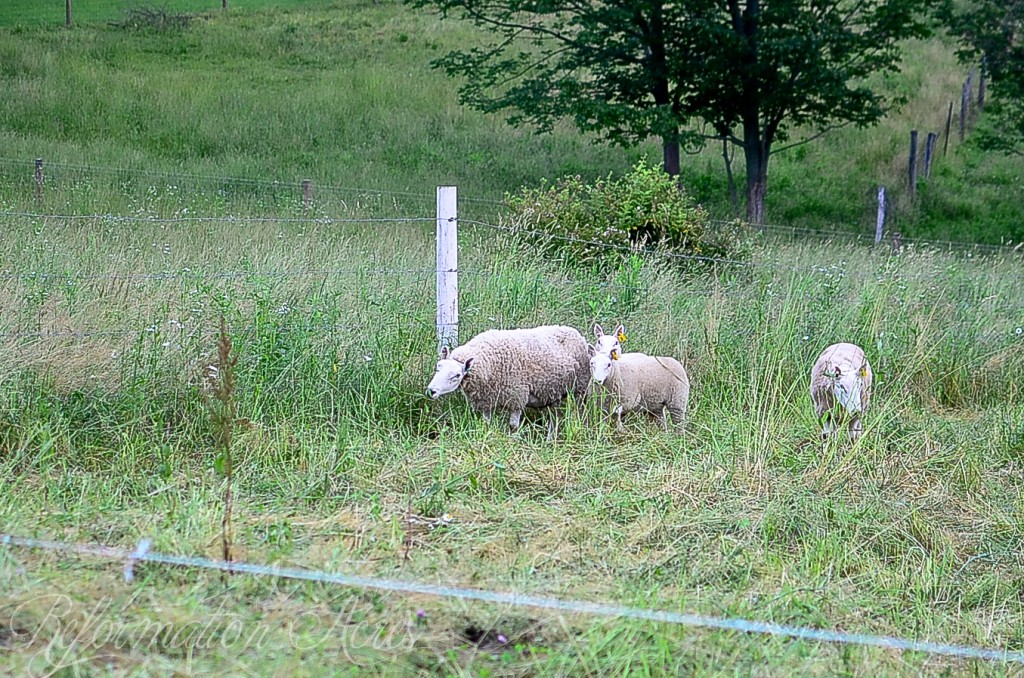 So that left us with a Pasture Fertilizing Lawn Mower who could pull double duty in homestead fiber production. A side of farming we haven’t tapped into yet. And as an avid lover of knitting and crocheting, one I’m excited to get into in the future! And as I did my research I learned that the profession of sheep shearing is declining and that our state university offers a class in the fall… we’re planning on a few of us attending. Perhaps we could start a little business? Who knows.

Cheviots are hardy and seem perfect for our cold, windy winters on Hurricane Hill. They’re reputedly good grazers and not too picky. Being smaller framed, I thought would be easier for the children to feel comfortable handling.

Though Cheviots may come in smaller packages, they contain for the sheepman a surprising combination of highly desirable qualities.  They are noted for hardiness, longevity, productiveness, milking, and mothering ability and for their great activity.  They are high in quality and hang a presentable carcass that has a minimum of outside fat for the amount of carcass lean produced.  They utilize rough, low producing hill country very profitably with relatively little assistance from man and even less from the elements.  Where there is a really tough clean-up job to be done to convert waste land into dollars, more and more sheepmen are discovering that “Cheviots can take it.”

In comparing Cheviots with other breeds, let the comparison be made on a basis of pounds of dressed lamb and clean wool produced per acre, and consider all of the costs of this production, including the year-round cost of feeding the ewe, and the time and attention required at lambing and shearing time.

Plus they’re adorable, but I swear, that didn’t factor into the decision making at all. 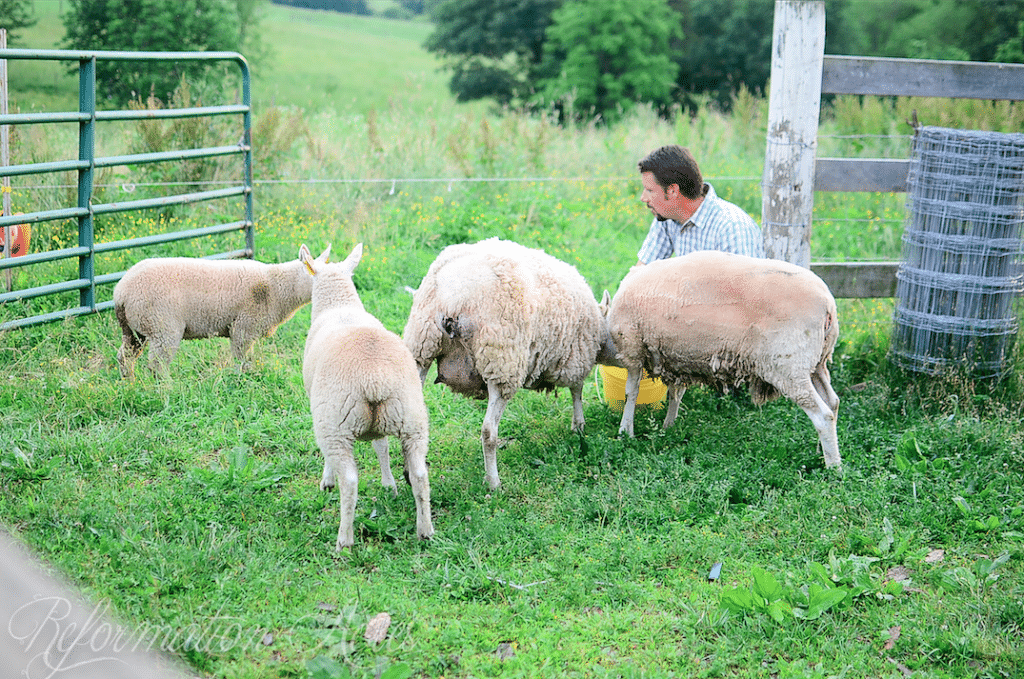 So a few days after the search officially commenced, a small flock, reasonably priced, was listed for sale within driving distance and so the next day The Big Blue Trailer was hitched to the van and the newest members of our homestead came home.

And contrary to the advice seen from The Elliott Homestead (who also recently welcomed sheep to their farm), we did not in any way prepare for these gals. As would seem customary for us, we purchase on impulse and figure out the rest as we go. (Hello. Anyone remember how we bought a bred, dry Dexter cow who was actually open & lactating and then went back and bought the bull off the farm who once he did his job we butchered. Ourselves. It looks like we don’t learn.)

We haven’t settled on names yet. I don’t remember the name of Mama Ewe, but the younger of the two older ones is ‘Lucy’. I’m thinking of maybe forage names for the rest? Clover? We’ll see.

Today we picked up some electrical sheep netting (exactly like this– only in our unpreparedness, we paid more). And somehow managed to coax these skittish gals into it. I’m hoping that with time and handling they’re warm up to us.

We’ll follow them along in our system of rotational grazing a day or two after the cows have gone through so they will finish off the grass and weeds and minimize the amount of “clipping” we’ll have to do. Actually, hopefully, they’ll eliminate it entirely, but that might be wishful thinking. A week or so after they’ve moved on, we’ll bring the ranger broilers along after them so they can add a bit more manure, pick at whatever greens are left, and more importantly spread the manure looking for insect or parasite larvae.

That’s the plan. But if I’ve learned anything, it’s that those always look better on paper. 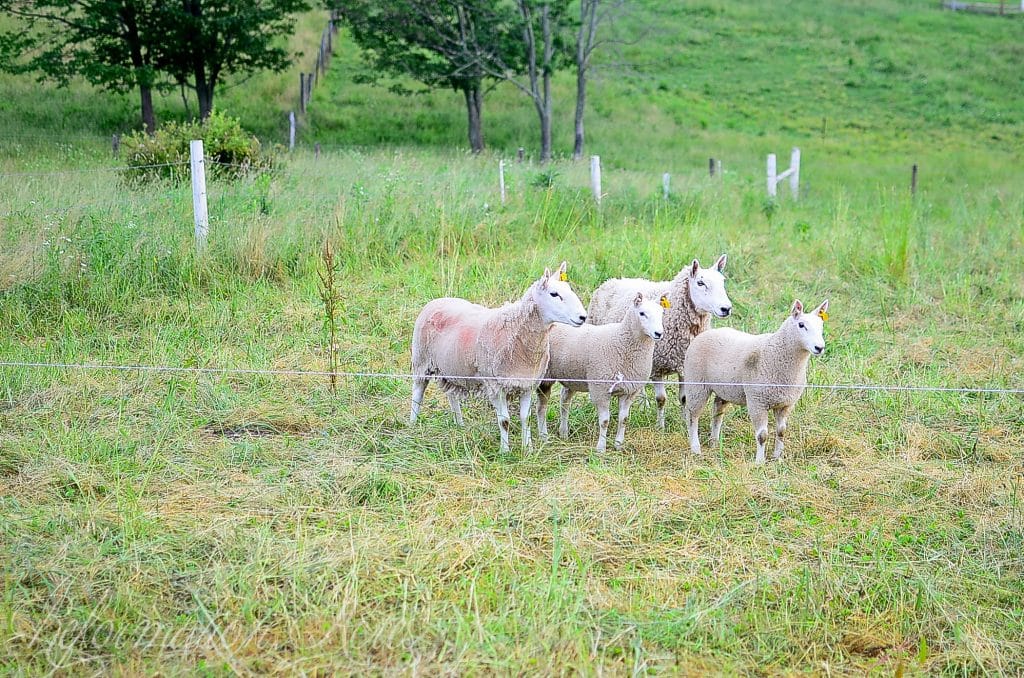 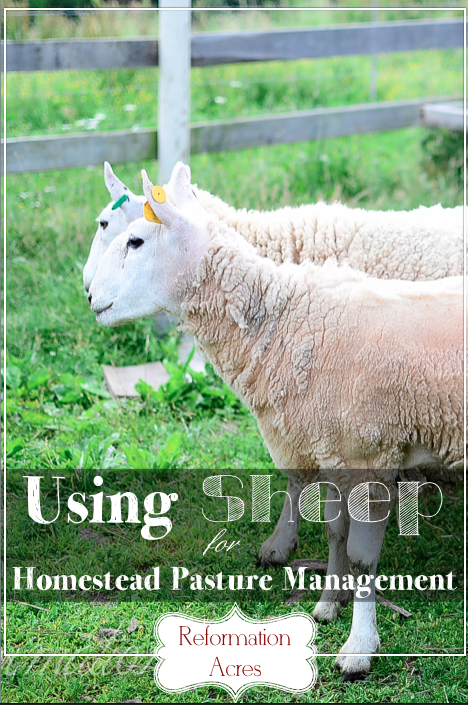