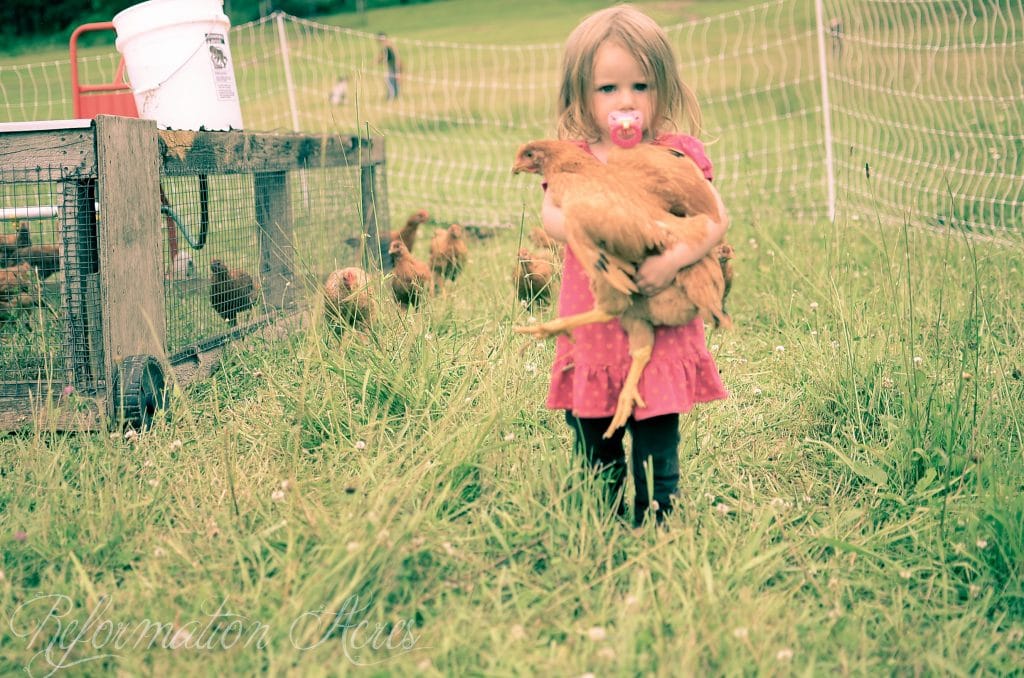 Our Freedom Ranger Broiler Chickens that we’re raising for meat to feed our family aren’t about to live a pampered life.

Oh no, no, no. No air-conditioned shady barns. No all-you-can-eat buffets style feeding troughs where they can lounge around all day gorging themselves. No bellies burned of all their feathers from lying about in their own excrement.

For the 13 or so short weeks of their life we’re putting our broiler flock to work. In exchange, they’ll get a varied diet of feed ration, grass, clover, earthworms, insects. If they can find a mole or a toad, they can have that too if they’d like. No vegetarian chickens here! We let them be the omnivores they were created to be. They’ll have the freedom to run about strengthening their legs and hearts so they don’t snap their bones or burst their hearts from the exertion of moving.

You know. The sorts of things that make this hybrid more like a real chicken. And why we love to raise them. (That and the winning taste tests. That might have something to do with it too, but how much of the former influences the latter?) 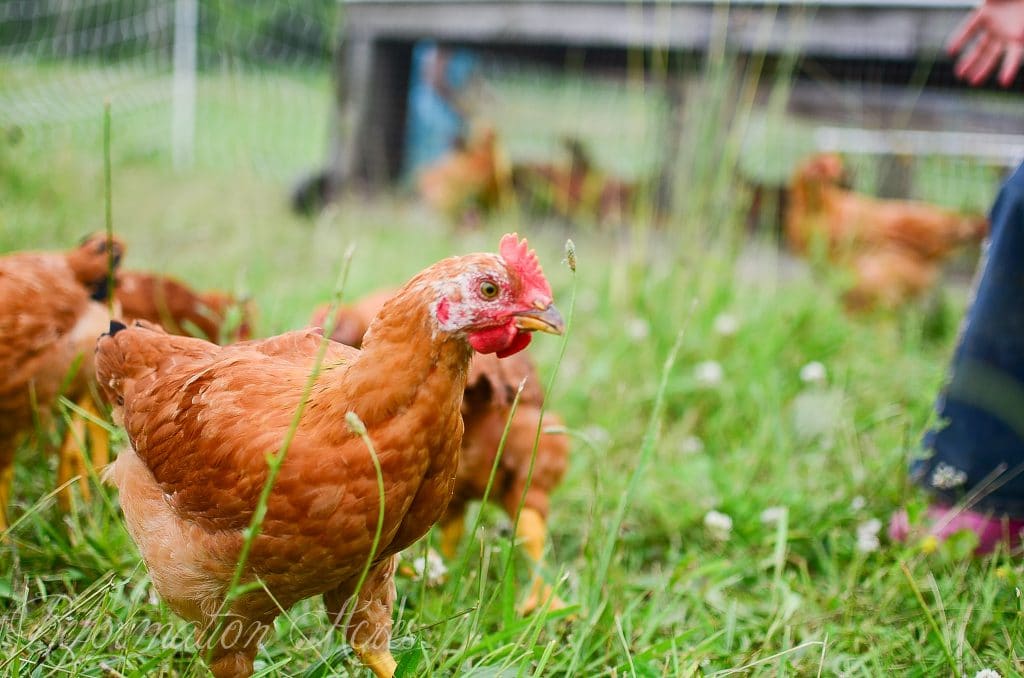 The work these guys and gals have to do while they’re living on our homestead is threefold.

With their droppings they will work to improve the grass that will in turn be converted into milk and beef. And while they’re decimating the fly population by eating up the larvae, they’re also scattering those piles of manure, working them nicely into the soil. 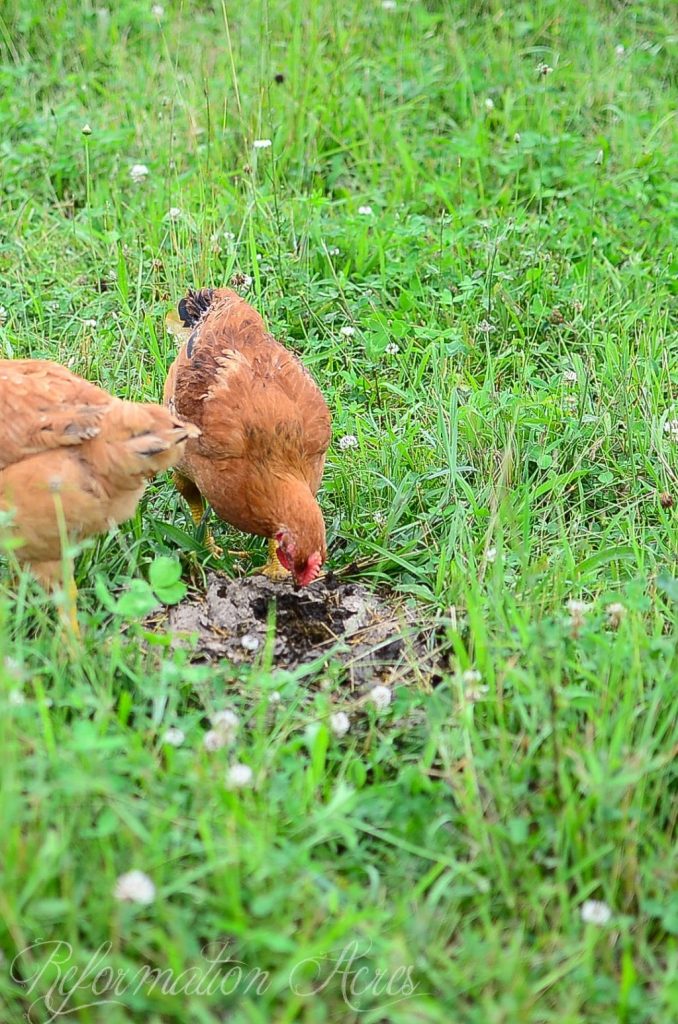 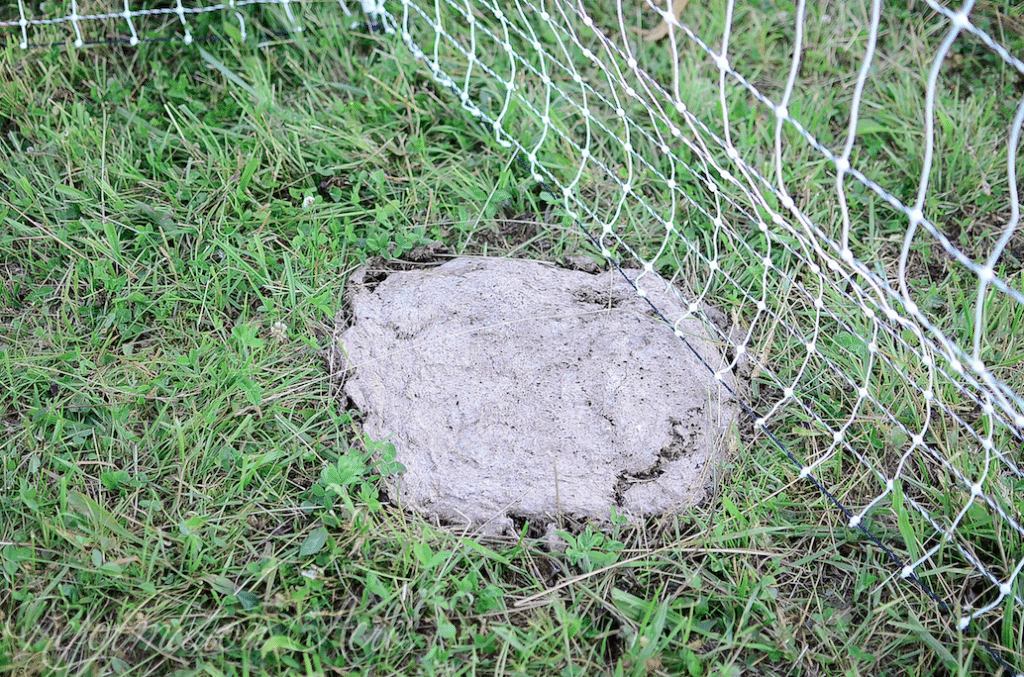 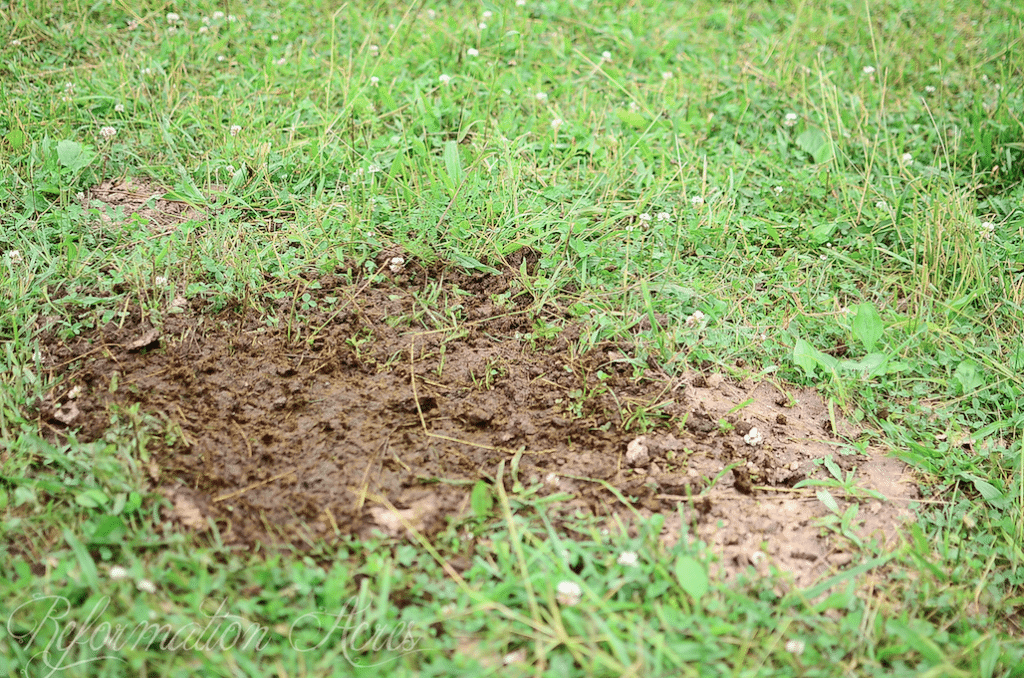 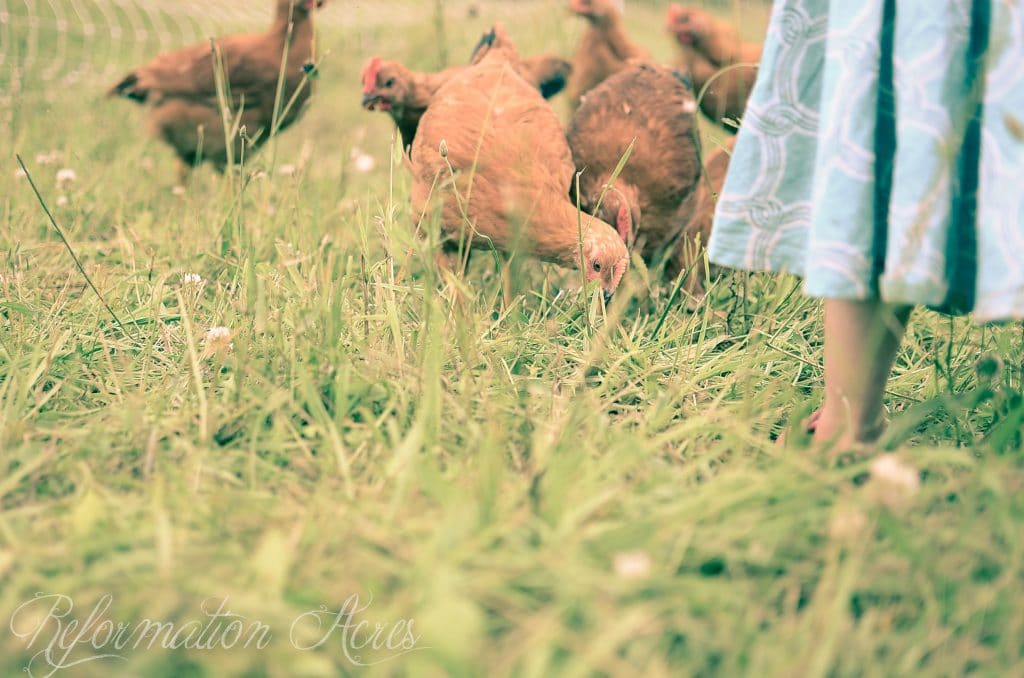 In past years, we’ve simply allowed them to run around the pasture during the day. At dark, we’d shut them up in a little run-in hoping that would be enough predator protection.

Crafty coons and others always found a way to get a treat when they wanted to. Our pasture had a 4-strand high tensile fence with predator wire with the predator wire being a joke.

Last year, we put them in one of those popular movable chicken tractors. They stayed in night and day, moving the tractor once a day or more. While it did provide better predator protection, the birds didn’t really flourish like we had seen them do in years past. At first we thought it was bad stock, but after comparing notes with others, realized that it was more likely these birds didn’t like to be raised in confinement. 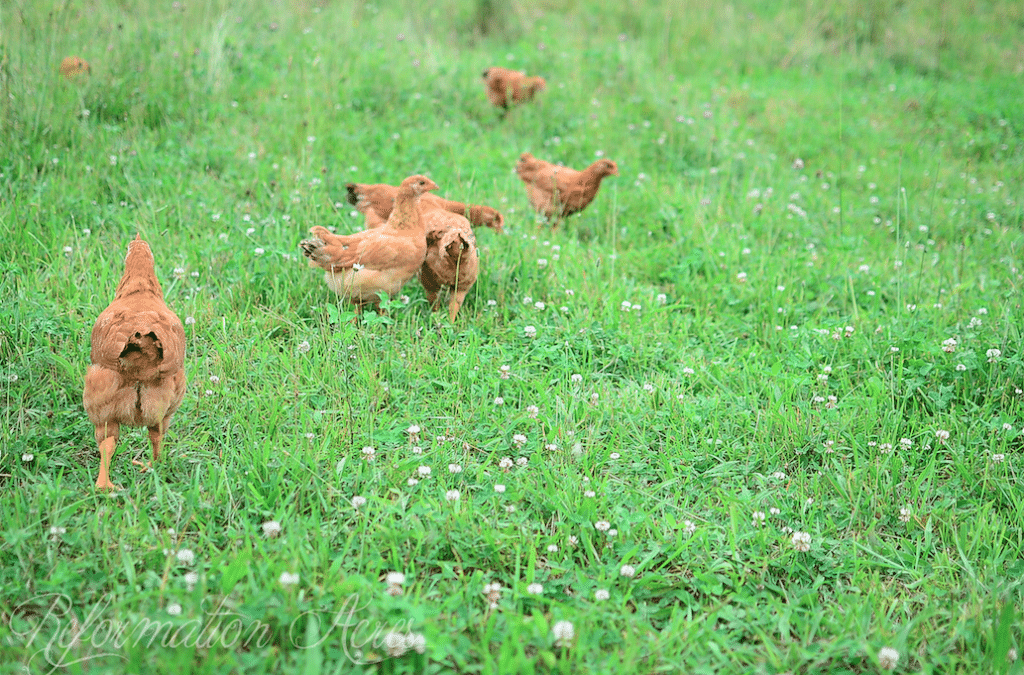 This year we have a new set-up combining the two ways we’ve used before and not only is it simple, but so far these birds are thriving! We’ve only had an unprecedented 2 losses!!! Neither of which were from predator attacks!


Moving the Freedom Rangers through the pasture during chore time is a family affair. (Subscribers may need to click through to watch the video.) 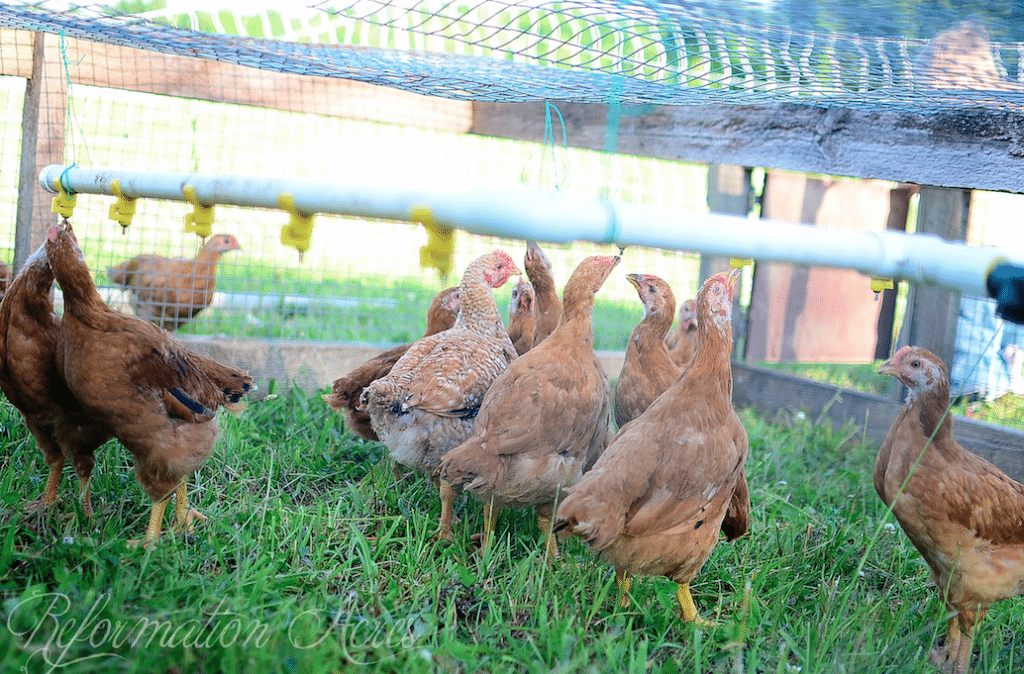 We’ve made three investments this year, all of which have been absolutely worth every penny.

2.) A Nipple Watering System (We bought THESE.)

3.) Wheels for the chicken tractor/shelter that have ball bearings

The birds are fed & watered twice a day, morning and evening. In the evening, the fencing is pulled up, the tractor is moved to a fresh spot so too much manure doesn’t accumulate, burning the grass and stunting it’s growth. The fencing is replaced. The chickens are given their food last which causes them to all come running in and we shut the fence in around them. In the morning, the netting is opened so they can run around the pasture where they will. The tractor is wheeled forward in the fenced area so they aren’t congregating on the same spot all day as they did all night for the sake of the grass. 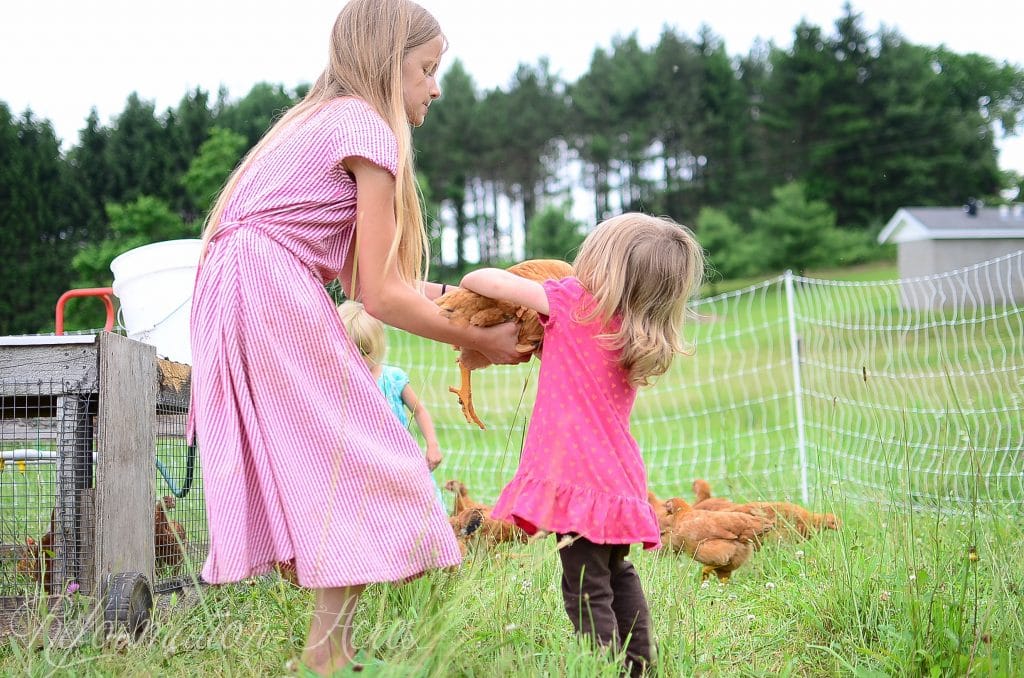 I hope that by reading this you’re encouraged if you had a bad year, or two, or even more. Whether we’re talking chickens, gardening, livestock, whatever homesteading endeavor you’ve taken up, sometimes it just takes that long to get the kinks worked out in a system and find what really works for you, your schedule, your land, your family, your homestead! Be creative & persevering! Try something new! 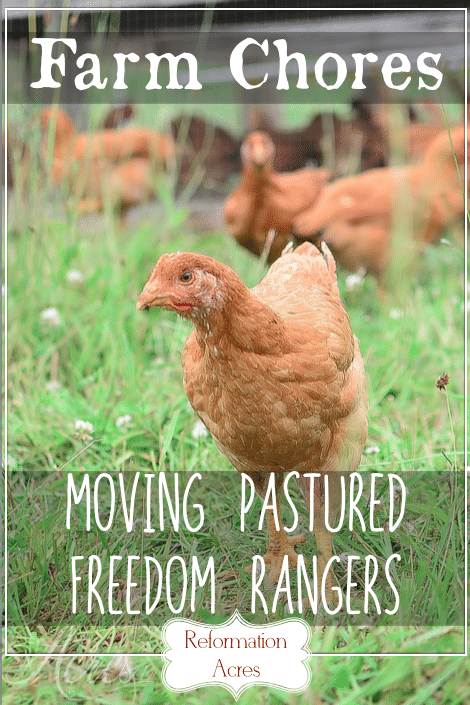 « ~Today in the Garden~
How to Naturally Treat Scours in Livestock »