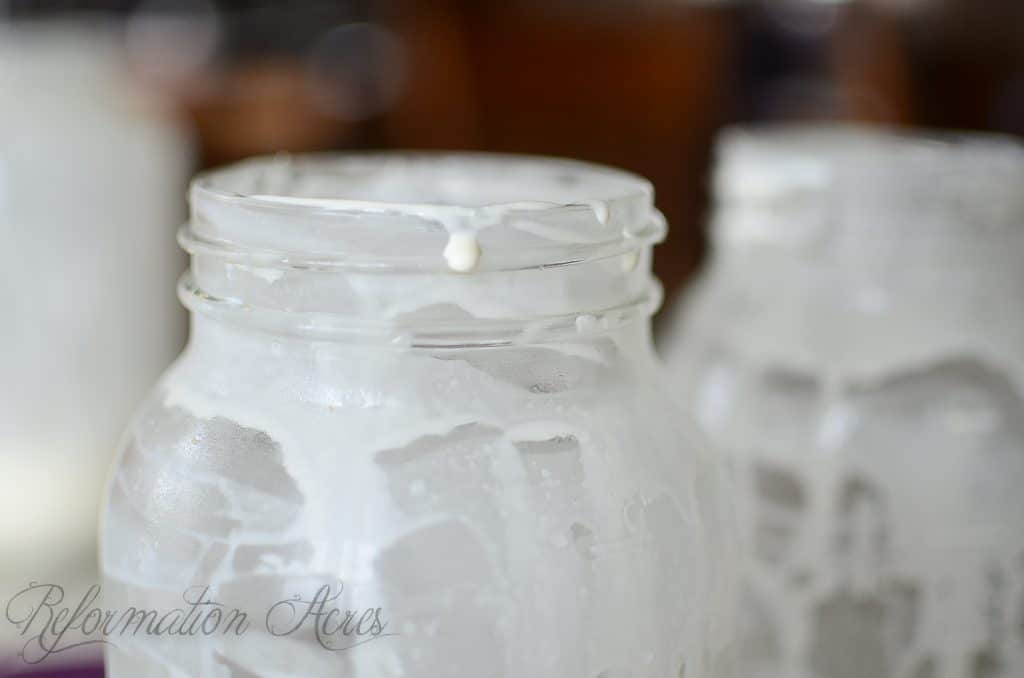 I’m not just normal busy this year either. I’m scared about how I’ll get it all done and still find time to enjoy having a new baby, the sun rises, the smells of the earth busy. Having over 7000 extra square feet of thistle garden will do that to a gal though.

That’s Seven Thousand… with a THOUSAND.

One thing I decided had to go for this year was the cheese making. I’m going to miss the fresh mozzarella– especially sampling the warm, squeaky, salty bites after stretching it. I’m going to wish I had some Farmhouse Cheddar on hand for toasting a quick sandwich at lunch after a morning of unsuccessfully trying to find the bottom of countless thistle weeds. I’m not going to miss whole milk ricotta however. That’s just way too quick and easy a treat to skip out on. You can bet I’ll be making that often!

Quick Tip: Know how much milk your dairy gals are giving you by keeping good homesteading records with the  SmartSteader homestead management app!  With SmartSteader you can record daily tallies and compare them to other times to discover patterns in production that help you know when something is off. (It also helps track expenses so you know exactly how much a gallon of milk is costing you, without you ever having to do any math!!) 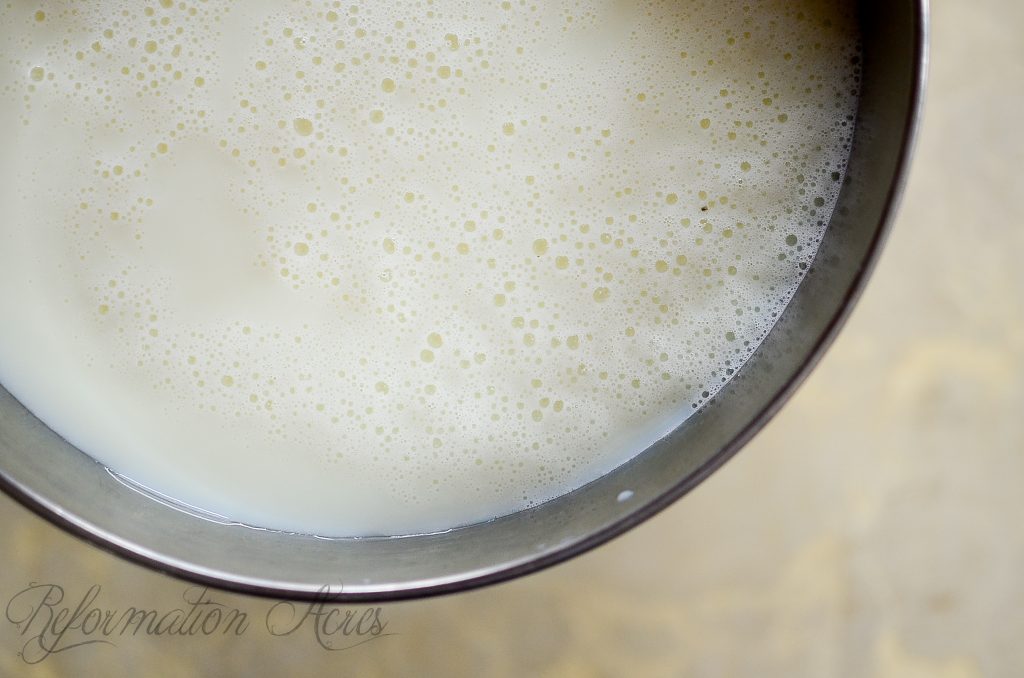 But if I don’t do something about all of that wonderful Jersey milk Holly is blessing us with, we’ll drown in a puddle of cream.

Which, frankly, might be a good way to go.

The only way better might be go in a puddle of butter.

Which brings me to my next point which is: Butter and Bacon.

We bought a couple of beautiful pigs whom we shall fatten on superfluous Holly milk, from which I’ve skimmed away all of the wonderful cream, whose destiny is to be turned into golden balls of butter. And the pigs? They’ll end up as bacon.

I think it sounds like just about the perfect plan myself.

But if this whole perfect plan of butter, and bacon, and redeemed time is to prosper, I need a better way of skimming cream than by the tablespoonful. I mean the girl isn’t even on fresh grass yet! How much will skimming tie me down to the kitchen when she gets some green in her diet?!

So I set out to find the easiest way to skim cream. And because I’m cheap, the cheapest. 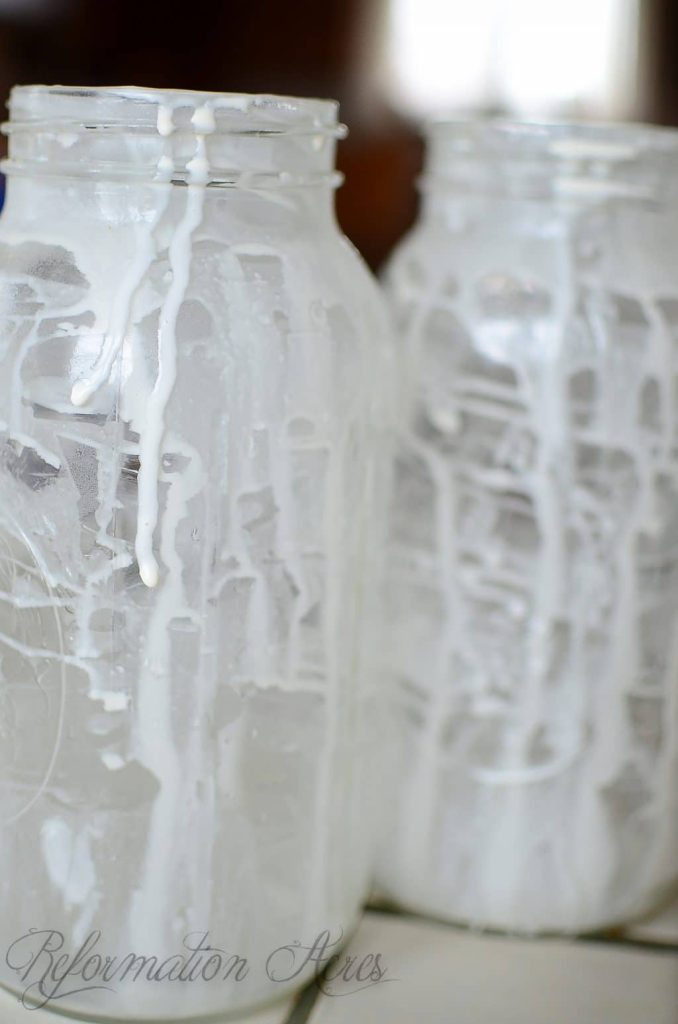 I thought the best way seemed to be glass mason style jars with the spigot (You know, that look like this.), but two things kept this from working out for me.

First, the milk drains out so quickly the cream ends up slowly following down the sides and I easily lost track of where the cream line actually was in order to know when to flip the spigot off. But more problematic than that was the inch or two (depending on your jar) of space under the spigot where there is still milk. Sure you can tilt it to the side and let it out that way, but it’s still hard to see when all the milk is out. If the jar is slightly tipped away from you, it looks like the milk is all out when it isn’t and meanwhile you’re shaking a bit and mixing a little of the cream back in which is some precious stuff- not an ounce to be wasted!

This was better than ladling it out, so far as time was concerned, but it was still more of an upfront investment than I would have liked to make.

The whole Time vs. Money argument. She’s one no one will ever win.

BUT does it waste time? NO!

Stick it in, suck it up, clip it on, and WALK AWAY!

The whole process of skimming cream from half a gallon of whole non-homogenized milk was over in 9 minutes. During which I made lunch! 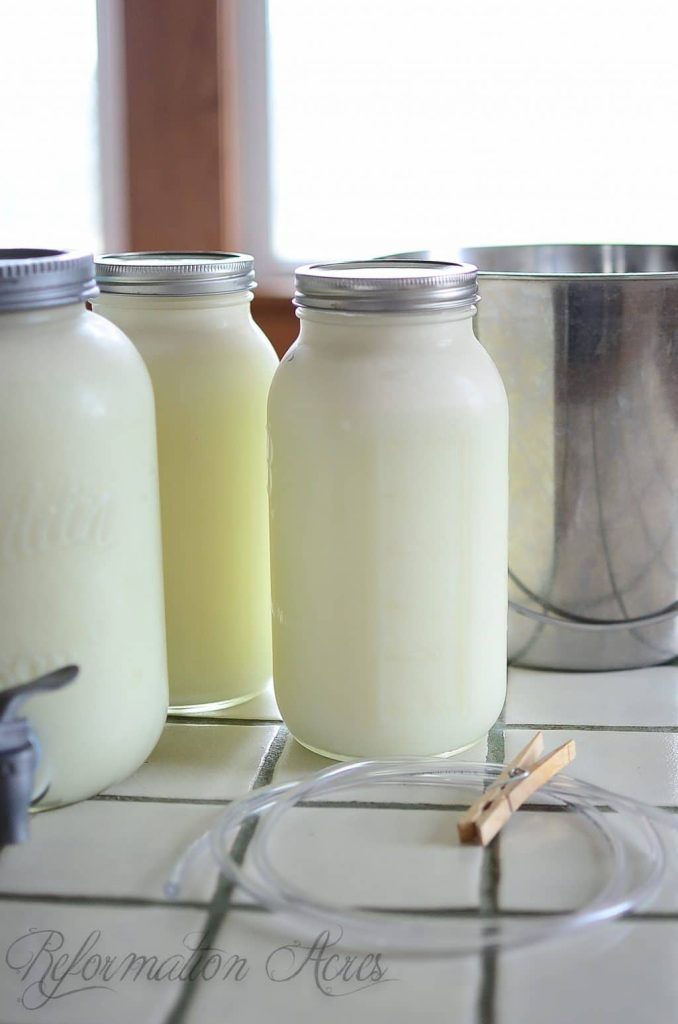 How to Skim Milk (The Hands-Free Way)

1 Spring-type Clothespin
1 vinyl Tube, ¼” or more wide and at least 3 feet long
1 jar or container large enough to put the skim milk in.

•Put a jar of milk where the cream has risen to the top on a high surface, such as a counter or table.
•Place the empty jar on a chair or on the ground (depending on how long your tube is.)
•Slip one end of the tube down into the milk until it hits the bottom. (I like it close the the bottom “corner” of the bottle so I can watch it at the end.
•Create suction to draw the milk through the tube.
•Place the tube into the empty jar and allow the skimmed milk to flow.
•Clip the tube to the rim of the milk jar so you don’t have to hold it and walk away! 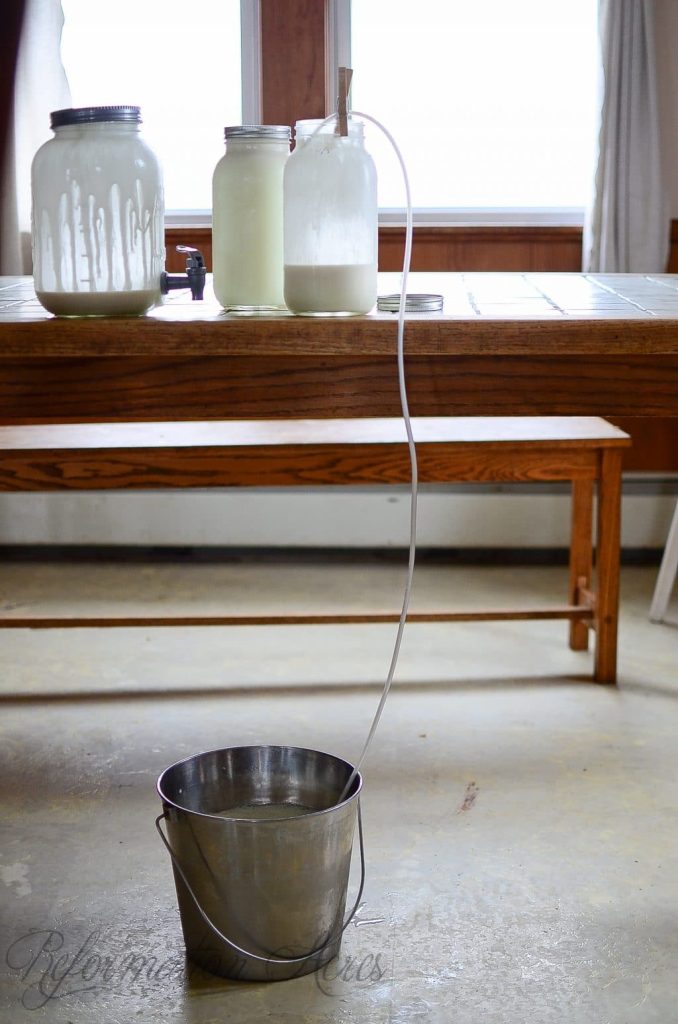 •When it starts to get near the end, come back and keep an eye on it. You can see a thin line of cream start to get pulled down into the suction if you leave it in place. Just trail the end of the tube around the bottom “corners” of the jar until all the skim milk is gone.

•A concern was brought up on Facebook because of the composition of the tubing materials. My 2 cents: Vinyl tubing is used in the home brewing industry without troubles with leaching. Since the length of contact the cream makes with the tube is so short and because nothing is heated up, I’m not concerned. 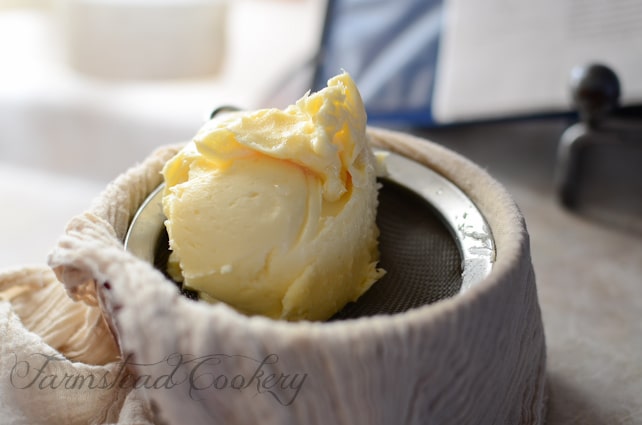 There. Now with virtually no effort or expense you’ve been able to skim off a beautiful, traditional, healthy fat. Use it as you wish. You can whip it, make sour cream, or the most amazing butter.

What’s your favorite use for cream? 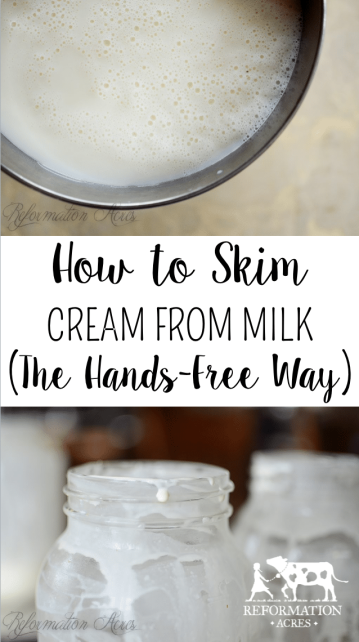