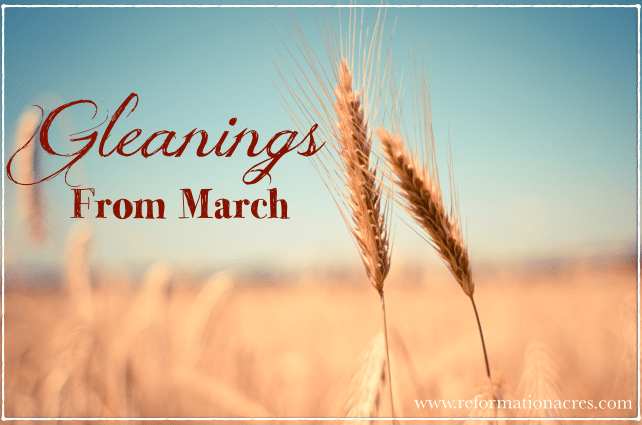 Gleanings is my monthly “link love” post where I share some of the interesting articles I’ve come across the past month.
•How to Build Your Own Curriculum Without Being A Rocket Scientist (defunct site)

When we started out designing our own curriculum 20 years ago we were not at all impressed with the track record of the public school system. After some research we decided that the culturally accepted “philosophy of learning,” was the problem. Schooling in America is based on the Greek idea that “knowledge “  is everything and the humanistic notion that children are no more than material beings without souls. This is why content continues to be stressed as the most important element of an education, with success tied to prestige and wealth, when instead we should be stressing wisdom and understanding, which are linked to selflessness and eternal values.

•Food as a Ministry Part 2

In Part 1 of Food as a Ministry, I shared: 1) why ministering to our brothers and sisters in Christ with food is a great way to use our passion and gifts to cook tasty food, 2) things that hinder us from doing this type of ministry, and 3) practical reasons why you should start or join a meal ministry in your local body (or homeschool group or other group).

In Part 2 (this post), I’m going to discuss the steps to getting a food ministry up and going, as well as some funny, but realistic, scenarios that can occur when there’s no one like you to take the lead. I’ll also share some of the ins and outs of communicating with the families in need as well as your team to keep things running smoothly.

•Do you have chicken syndrome?

Diversify and get out of your chicken rut. Add in some wild fish or grass-fed meats to mix things up.
When you do eat chicken, eat exclusively chicken from pastured birds (that means birds allowed to roam around and peck at grubs, eat grass, roll in the dirt… do chicken things the way chickens do), prioritize dark meat, and don’t throw out that skin!

Life as the mother of many has been every bit as blissful as I imagined. Sure, there have been lots of unexpected challenges, but there have also been plenty of unanticipated rewards. Here are a few of my favorites:

•Disney’s Progressive Agenda: Should Our Kids Be Watching Disney Flicks?
•This episode of Christian Farm & Homestead Radio on husbandry had to be the best I’ve listened to yet. There’s no doubt I’ll be listening again… next time with a pen in hand instead of an iron.

Here is The Deliberate Agrarian’s thoughts on the episode:
Scott Terry, Husbandry, And Christian-Agrarianism On The Internet
•Lost Art of Husbandry

•When my children are grown, each morning when farm chores are done, I’m going to drive to town every day despite my aversion to being there so I can continue to cuddle babies.

Cuddling Babies: Hospital Volunteers Show the Power of Human Touch
•I’ve always wondered… and now I’m convinced of it’s benefits, but sadly that still doesn’t mean I can afford it now. But when I can, I’ll make the switch!

Cacoa vs. Cocoa: What’s the Difference?
•The Plow Boy and the Delivery Boy

American writer Wendell Berry in his essay, “God and Country” once opined about the “tacit alliance” between the organized church and the economy. This alliance, he argued, manifests itself in the way that many denominations view the country church. He wrote, “The message that country people get from their churches, then, is the same message they get from ‘the economy’: that, as country people, they do no matter much and do not deserve much consideration.” He further adds, “According to the modern church, as one of my Christian friends said to me, ‘The soul of the plow boy ain’t worth as much as the soul of the delivery boy.’” Is that really the case?

Minimalist living is counter-cultural. It is contrary to every advertisement we have ever seen because we live in a society that prides itself on the accumulation of possessions.

I’m confounded and I’ll tell you why.
Because there is an epidemic of death and contagion sweeping across the farms of this country that is barely getting a mention in the mainstream media. If you ask me it should be front page news.
And I’ll wager that unless you live in farming community or you are a commodities trader or you are involved in some way with the pork industry, you don’t know what I’m talking about.

I’m talking about Porcine Epidemic Diarrhea Virus or PEDV for short.
PEDV is a disease that has killed over 5 million pigs in the United States since last May. In the month of January alone, about 1.3 million pigs died. PEDV has been confirmed in over 27 states and is spreading like a prairie wildfire.

How about you? Found any gems on the internet lately?

« 8 Medicinal Herbs for the Shade Garden
What is it About Gardening That is So Addicting? »