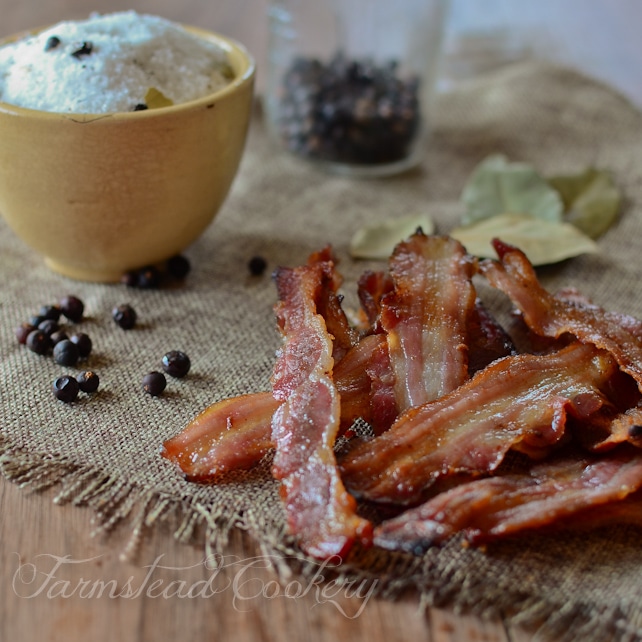 After years of searching for the perfect recipe for how to cure and smoke bacon we have a winner! This is the BEST way to make homemade bacon!

I mean, this is what it’s all about isn’t it folks?

It’s all for the love of bacon! All those months of feeding hogs, saving scraps, skimming milk, hauling water, chasing them through broken fences… it’s all about the bacon.

Except that since we started butchering our own hogs and therefore curing and smoking our own bacon, we never struck gold with a bacon recipe. Sure the bacon we made was pretty tasty. It was meaty enough to remind you that you were eating real food and not some overly processed artificial tasting store bought bacon. There was a salty smoky goodness to it, but we knew we could do better. We wanted nothing less than the best bacon recipe ever!

Well we finally found our winner!

If you’d like to make pork butter with me along with many other amazing prepared and cured pork recipes including prosciutto, capicola, bacon, guanciale, pate, rillettes, and more join us December for our Homestead Hog Butchering Workshop in central Ohio!

This year we were determined to get as much experimentation out of those 50 or so pounds of pork flesh from the belly trying different methods and cures. With one method & basic salt, sugar, and pepper cure using 2 ½ parts salt to 1 part sweetener, and a generous pinch of black pepper, we tried 4 different types of sweetener:

1.) Sugar
2.) Brown Sugar
3.) Evaporated Cane Juice
4.) Sucanat
Two slabs of belly were dedicated to this experiment. A third went to trying the River Cottage bacon recipe, and a fourth was reserved to try further based on these results.

What we discovered through blind taste testing (only one party  knew what they were sampling) was that we unanimously preferred the River Cottage bacon, followed by the bacon cured with evaporated cane juice.

It was surprising what a difference in taste was made simply by using the different sweeteners. Sugar gave the bacon a not-so-surprisingly artificial taste. We agreed that while we didn’t like it the best, it tasted the most like store bought bacon. Brown sugar and Sucanat were nearly indistinguishable from one another. Brown sugar was what we used for cures in the past so I wasn’t surprised this made the most meaty tasting bacon. Evaporated cane juice fell right in the middle- just  sweet enough to be flavorful and just meaty enough to be real.

Now with the River Cottage bacon, I did switch things up a smudge and used evaporated cane juice instead of the brown sugar that was called for. Perhaps that along with the flavor boost lent to it by the herbs was what made it a winner. I don’t know.

The recipe is this post has been updated from the original method.

At the Homestead Hog Butchering Workshop we hosted, the educators from Hand Hewn Farm taught us a new way to make bacon where the salt and sugar are calculated according to the weight of the pork belly… which means no more over salted bacon, no more curing salt, no more baby sitting the bacon, turning it and re-seasoning it every day for a week, and because it’s vacuum sealed in an exact curing ratio, you can smoke it whenever you get around to it! Our bacon is better than ever.

One of the other fun things we did at the workshop is open up our spice cabinet and let everyone take a section of pork belly and season it in creative ways, so get adventurous! While this seasoning combination in the recipe is a classic and our favorite, we have tried some really delicious combinations using herbs like rosemary, parsley, sage. Spices like cloves and ginger (which made it taste surprisingly sweet.) Dijon mustard, bourbon, sorghum, maple syrup. The combination of chipotle pepper powder, cumin, and paprika was so good we’ll be making it every year from now on! 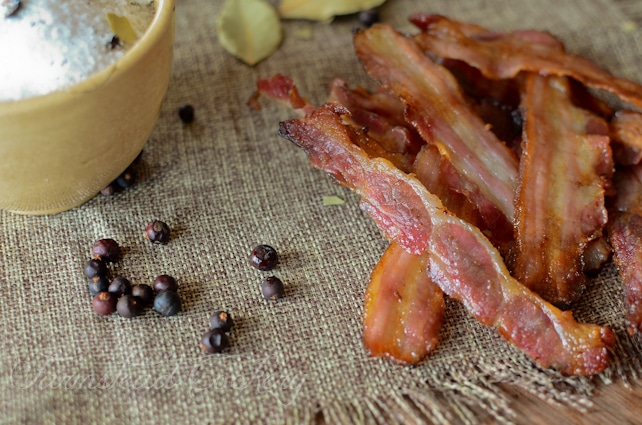 How to Cure and Smoke Bacon

How to Cure & Smoke Bacon

Check out these delicious bacon-filled recipes: