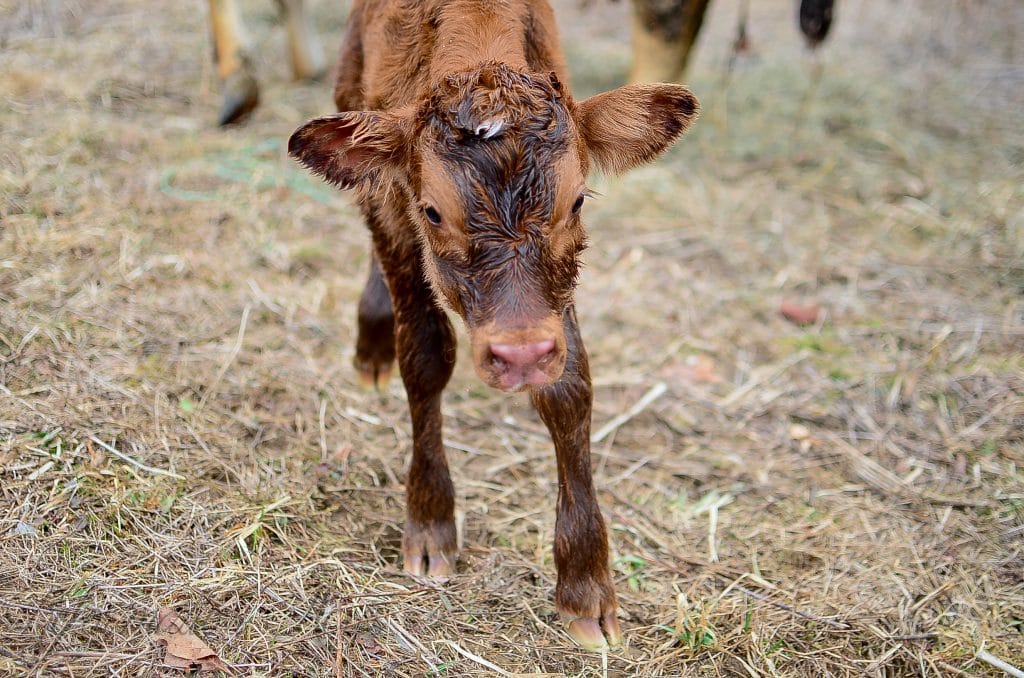 This little fellow is Rusty.

But we’re going to be calling him Rusty Buster for short. (There was a bit of name dispute and this was the one that made everyone walk away all smiles.) He’s the newest addition to Reformation Acres.

He was born Saturday afternoon after a quick and easy labor with the entire birthing support team in attendance… and then some.

We had spent the whole week on labor watch, but Holly’s (Rusty’s mamma) symptoms weren’t quite as discernible as Maybelle’s had been. Her tail head never got quite so high and she didn’t exhibit what I call the “Slinky Dog Effect” after the calf dropped. We figured there was time.

In fact on Friday, we felt comfortable enough to head to the city for the day to do a little clothes shopping. Naturally though, when we came home  the first thing we did was run out to the pasture to see if there was a sign of impending labor… or even a calf. Thankfully, there wasn’t the latter. We hadn’t missed it, but while she was lying down her girlie parts had so much pressure on them that they were open and she had a string of clear, thick goop stringing out. Soon?

We went about our work, but with one eye on the cow.   After all, her due date was based solely on the estimation of the dairy farmer from whom we bought her. With no scientific tail-bleeding-pregnancy-test or AI’ing that takes impregnation down to a small window, he had given her a due date of today (Monday the 24th). He was off by 18 hours. I’m thoroughly impressed.

Friday night we prepared for the impending birth by listening to a Fresh Cow Problems podcast. I don’t know if it left us more prepared or paranoid. Probably a mixture of both.

Really our fear and paranoia about this birth and postpartum period was fueled by Maybelle’s death last summer. For 5+ time proven birther that she was and from the Dexter breed notorious for having virtually no freshening problems whatsoever, to go to a Jersey and all of the troubles they present when freshening, we were terrified! In fact, at one point the stress got to my husband who declared he was through with Jerseys, this was too much worry.

(I confessed to a bit of jealousy. I told him I didn’t think he got so worried over me when I freshened. He said he did, but had enough sense not to show it. Good answer.)

Anyway, around lunch time the next day, a bag was spotted hanging from Holly’s backside, filled with some blood.

Blood’s a cause for paranoia right?! The amount probably would be for a person, but for a cow, maybe not?

After finishing up a couple chores and downing a hasty lunch we all congregated in the birthing pasture to watch the proceedings. Our neighbor and his brothers in passing even stopped to watch their first cow birth. They had seen a horse be born, but not a cow. 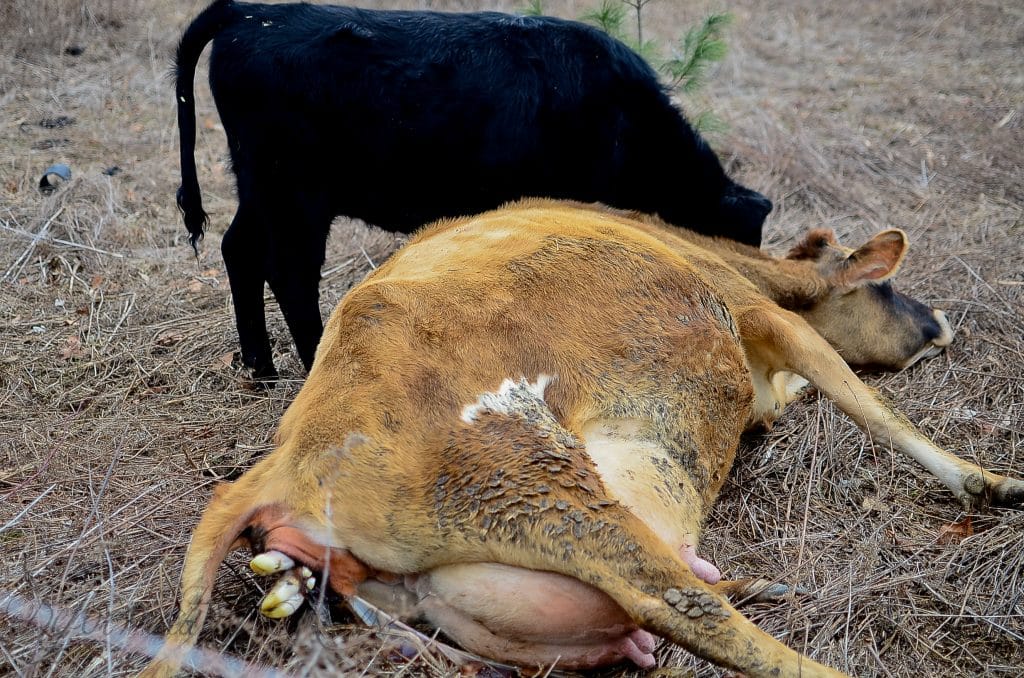 By that time, there was a single hoof of the calf coming and going out with the contractions. It was with nervous anticipation we stared. With each contraction hoping that there would be a second hoof that came out with each one. And eventually, thankfully, it did.  The first hurdle of presentation had been cleared.

Our neighbor seemed to be strongly hinting at our helping things along and pulling, but with Holly being reported as never having had a problem calving before, seeming to be in as good spirits as a laid-back Jersey cow can be, and still having an appetite, eating hay and enjoying a snack of grain, we weren’t too worried about her at that point. When there was a contraction, the calf’s little hoofs would give a little kick so we knew it was still ok. 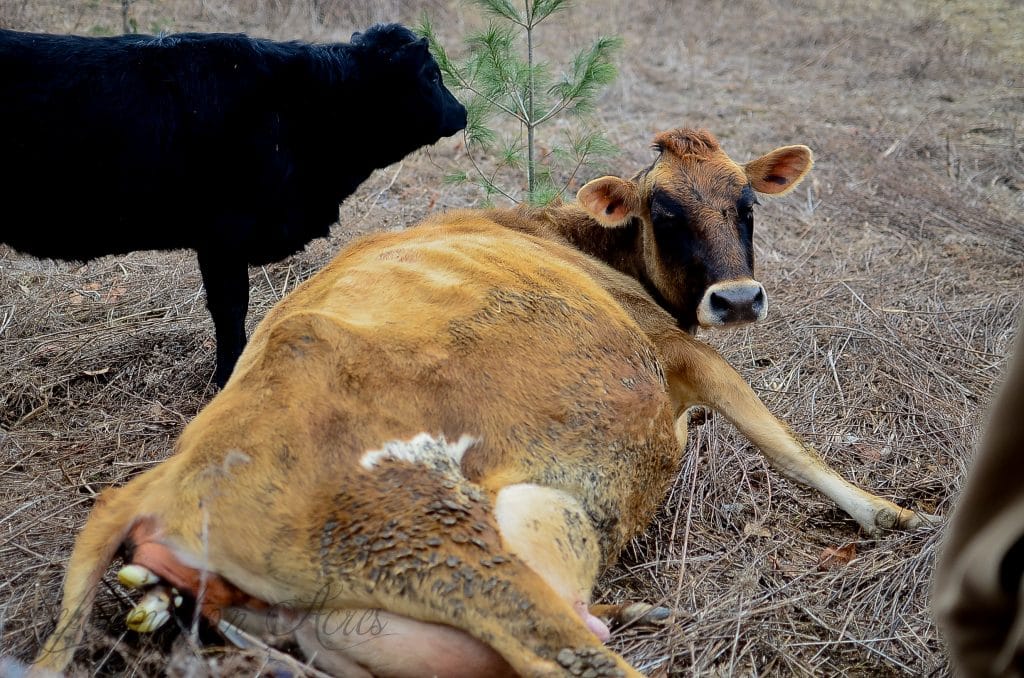 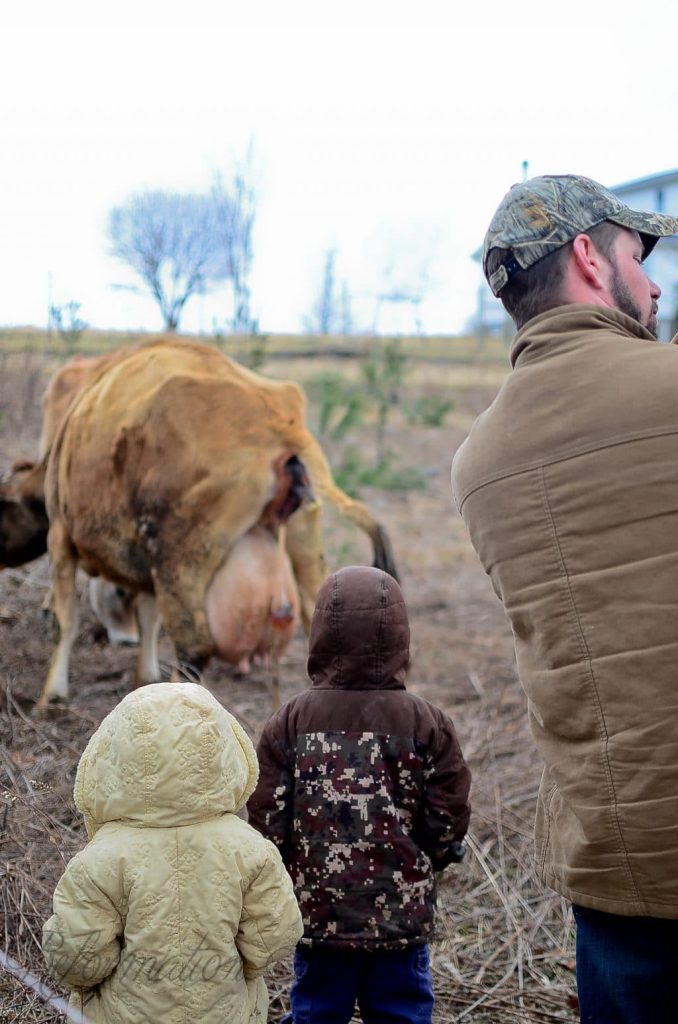 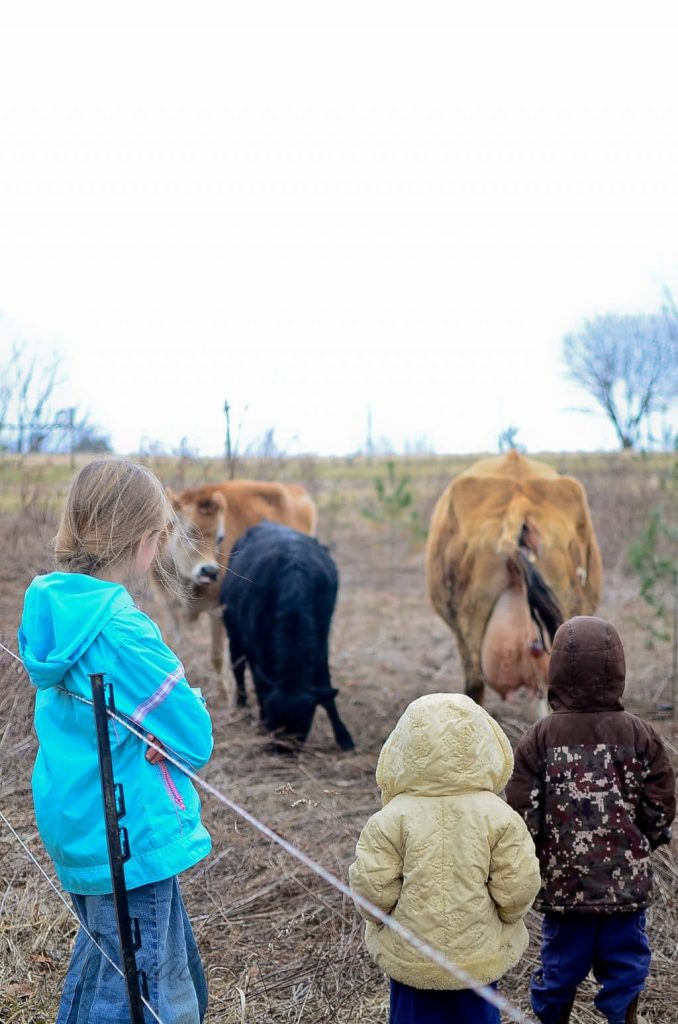 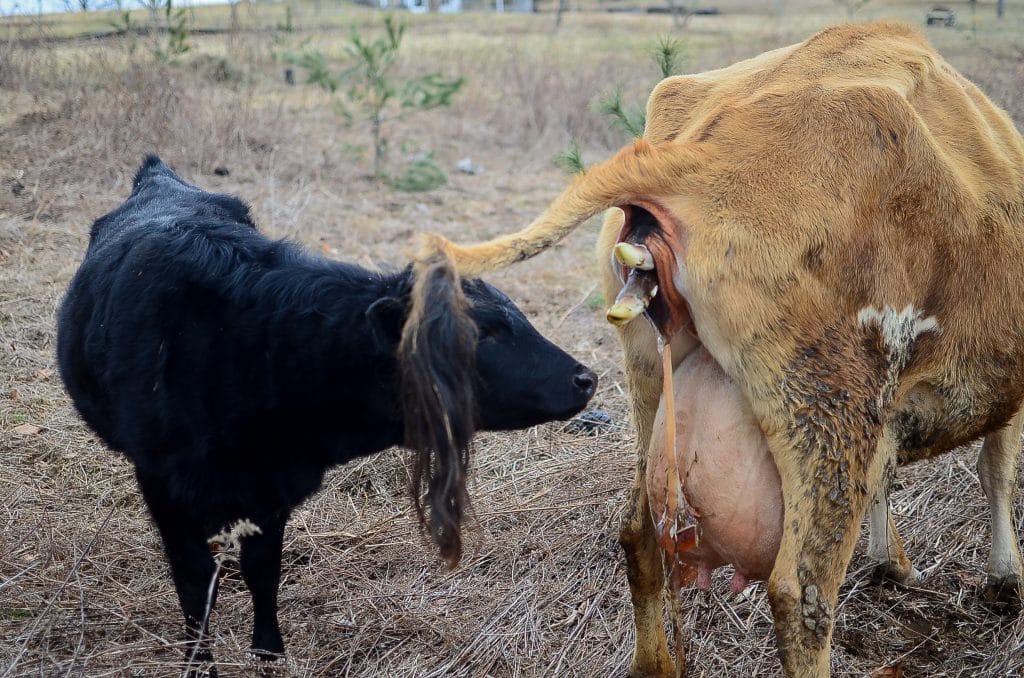 Some a bit more involved that others.

In fact, Maby seemed a bit upset by her adoptive mother’s condition and poor Holly had to lay there laboring with the little heifer climbing and stumbling over her head and sticking her head up her gaping backside. I suppose it could have been worse, she could have had to deal with what ‘Gus did to Maybelle.  (Later Maby, exhibited a few episodes of sibling rivalry, kicking the new calf once and then another time climbing on top of him, knocking him down.)

Holly seemed to labor better lying down.  Even nearly rolling onto her back seemed to produce the most effective contractions. Quite different from Maybelle who dropped Pepper like she was a giraffe.

Eventually a little tongue emerged, followed by a nose, head, and then half of the body. At that point it was obvious that the calf was essentially born, and the rest was a matter of Holly standing up or moving for the rest to come out and after a minute or so she did. 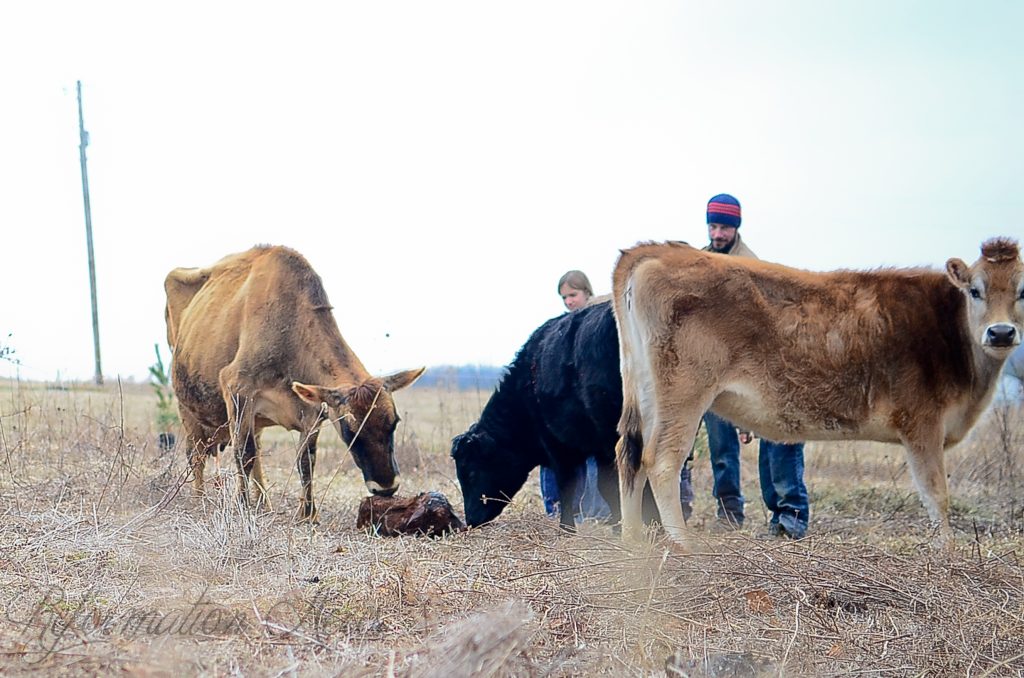 A peek was eventually taken and there was an obvious absence of the female anatomy that makes a Jersey calf a object of value and destines most males of the breed to a short life. Later it was confirmed that this calf was “sewn up tight” on the backend and will leave us with the question of his fate. 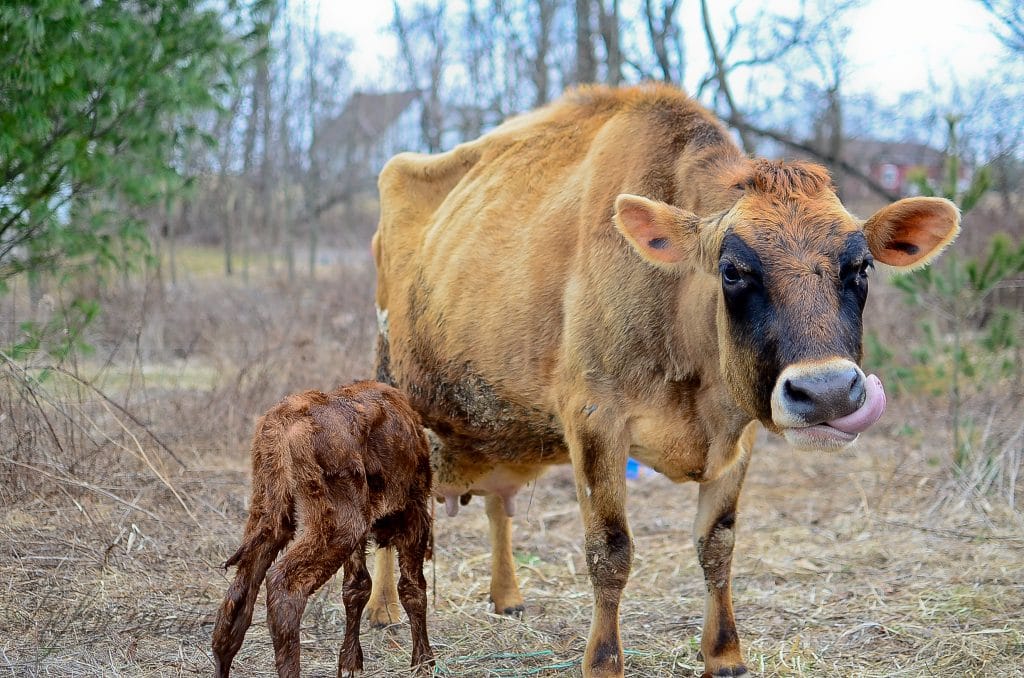 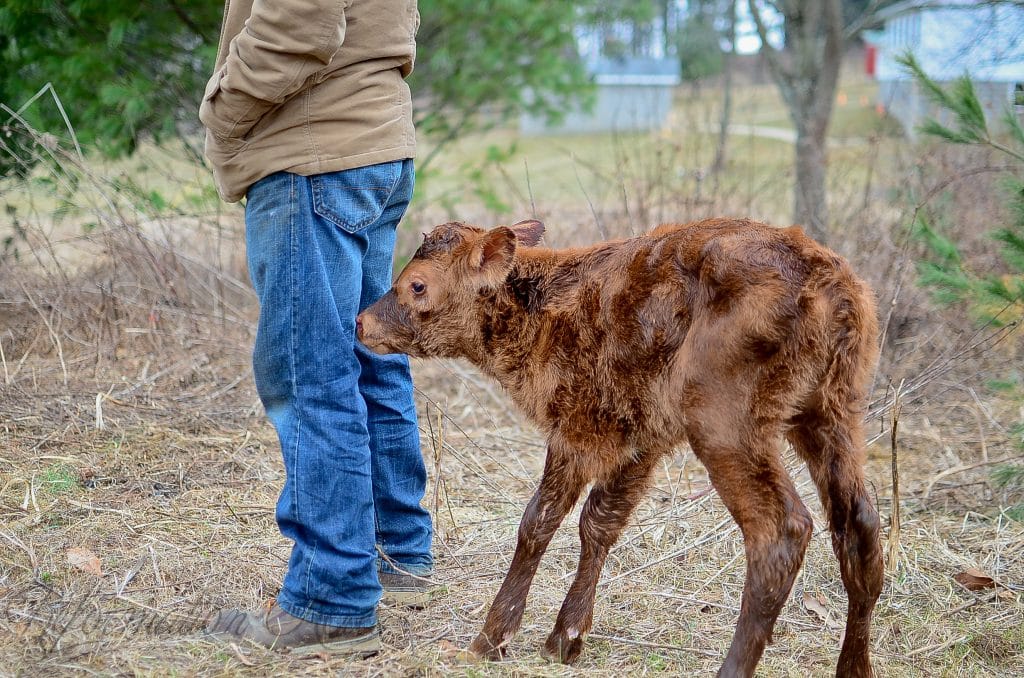 Rusty’s a curious little thing. Coming right up to us for a bit of scratching, much to his momma’s chagrin. It even looked like he thought he might find the Milk Bar up my husband’s backside. Otherwise he was very slow to find the teat, though he tried and tried.

Eventually, we did meddle in this matter. After dealing with ‘Gus a few years ago not getting that colostrum during the 2 hour postpartum window, getting sick, and scours, and infecting us all with a most miserable case of e.coli sickness I don’t EVER want to repeat, we weren’t about to take any chances! 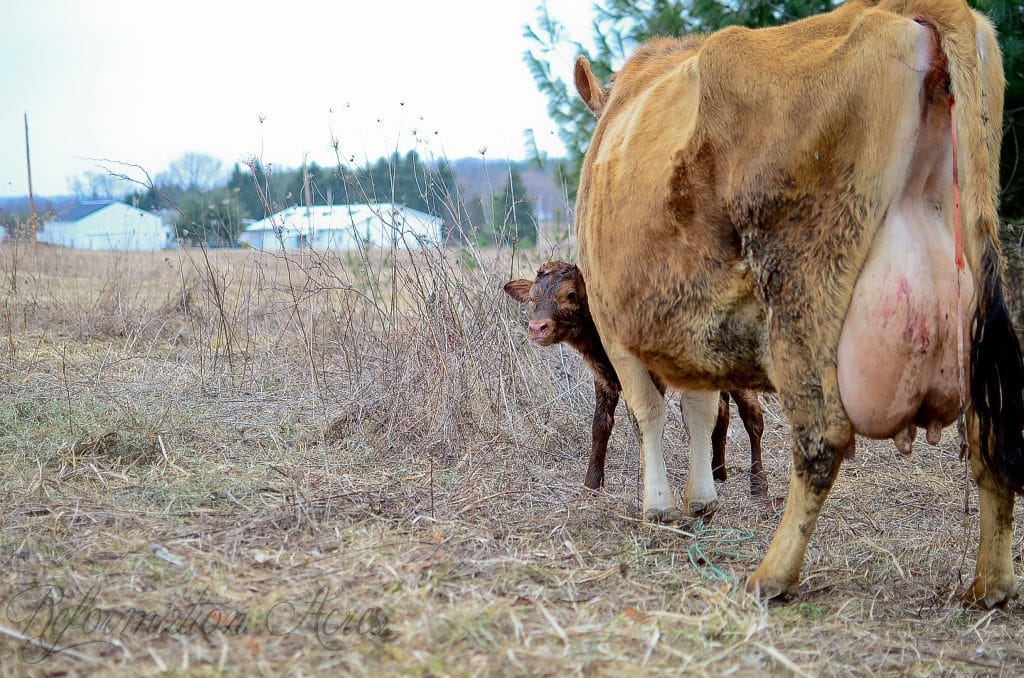 The postpartum period has been just as nerve-wracking as the birth… for us at least. After they were moved to the barn, mamma & baby were checked on about ever 30-60 minutes for the first day & a half. The placenta was passed about 6 hours later, which was a relief.

Today we did better. And only went to go look at them every couple of hours. Thankfully, there have been no signs of illness so far.

And hopefully, in a couple days, we’ll sit down to breakfast and a nice tall glass of creamy raw milk! 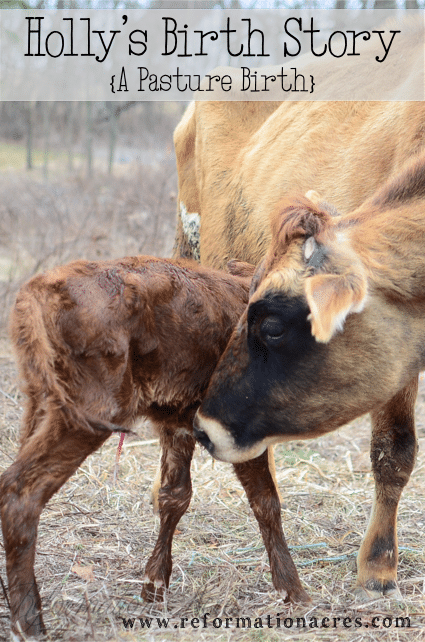 The voice of the LORD maketh the hinds to calve, and discovereth the forests: and in his temple doth every one speak of his glory.  Psalm 29:9