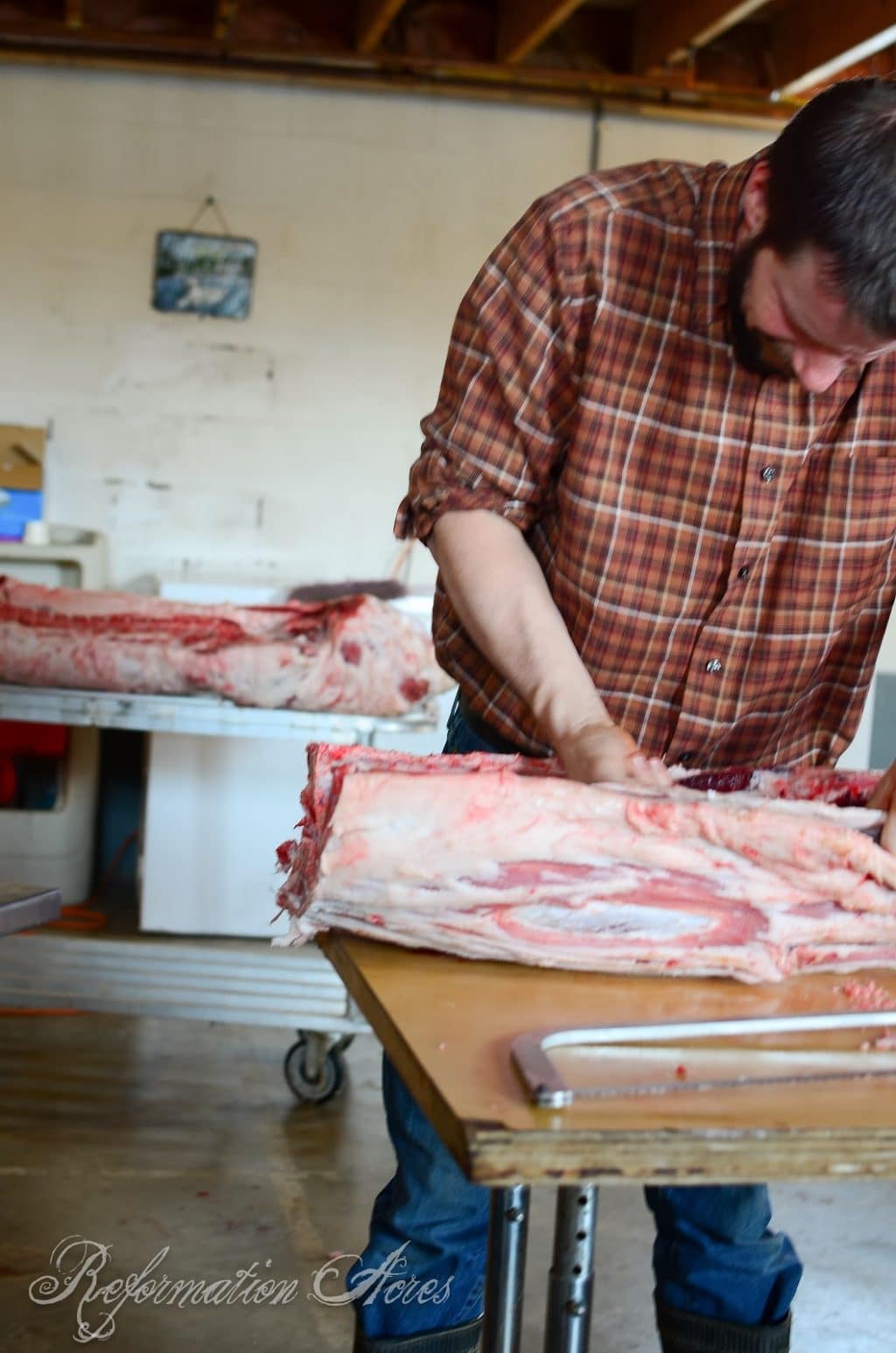 {Breaking Down into Primals} 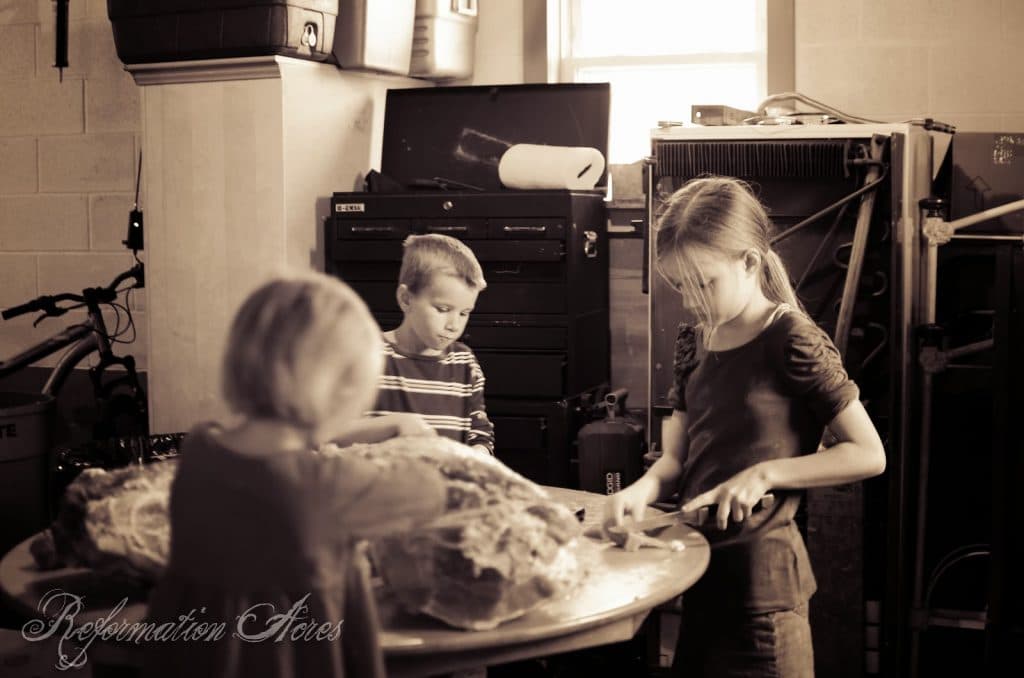 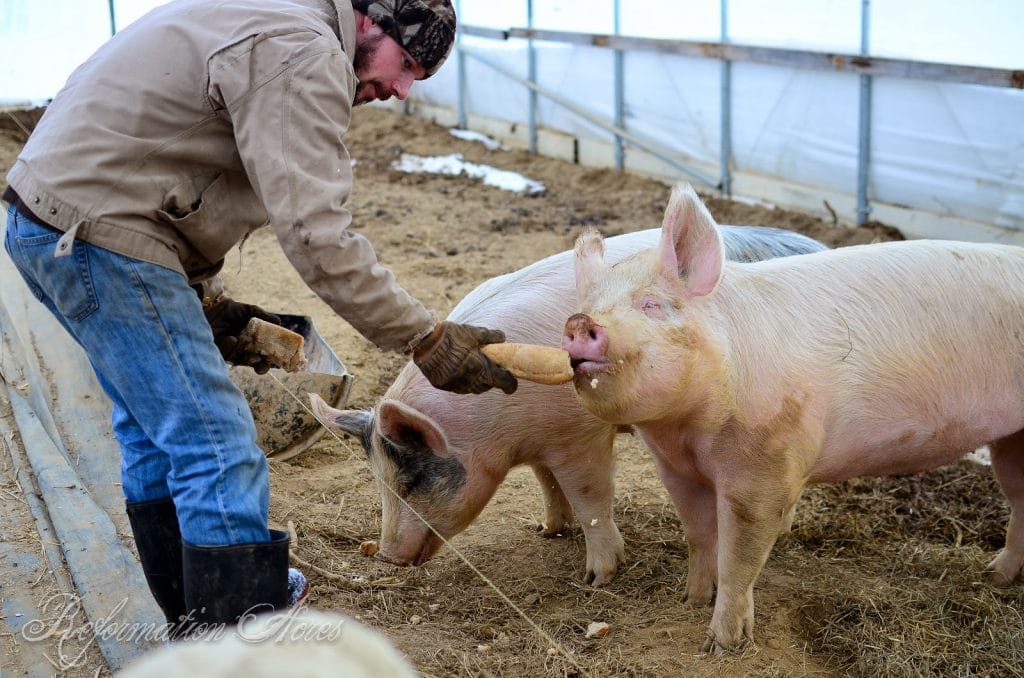 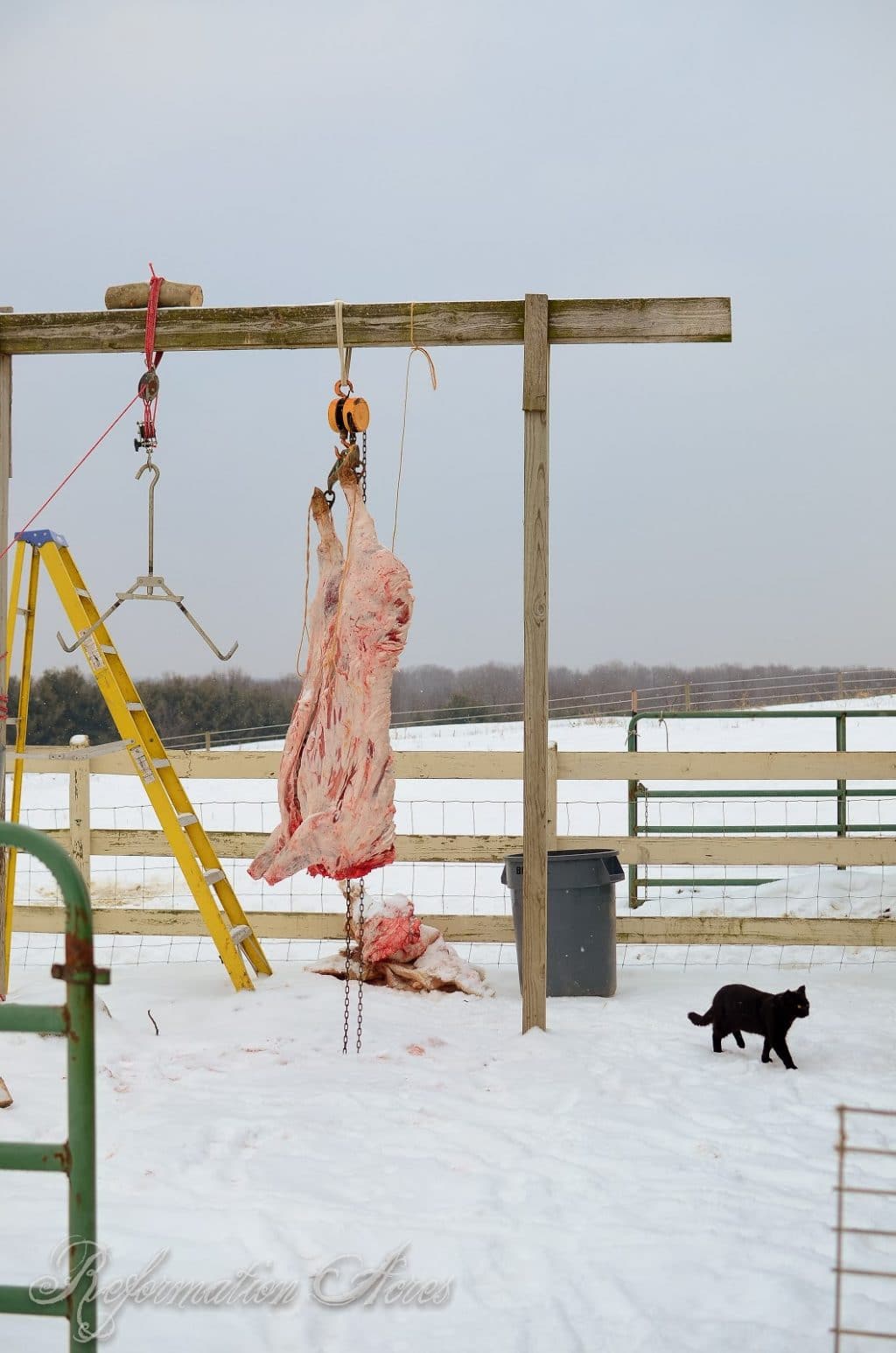 {The Butchering Frame… and kitty finished up snacking} 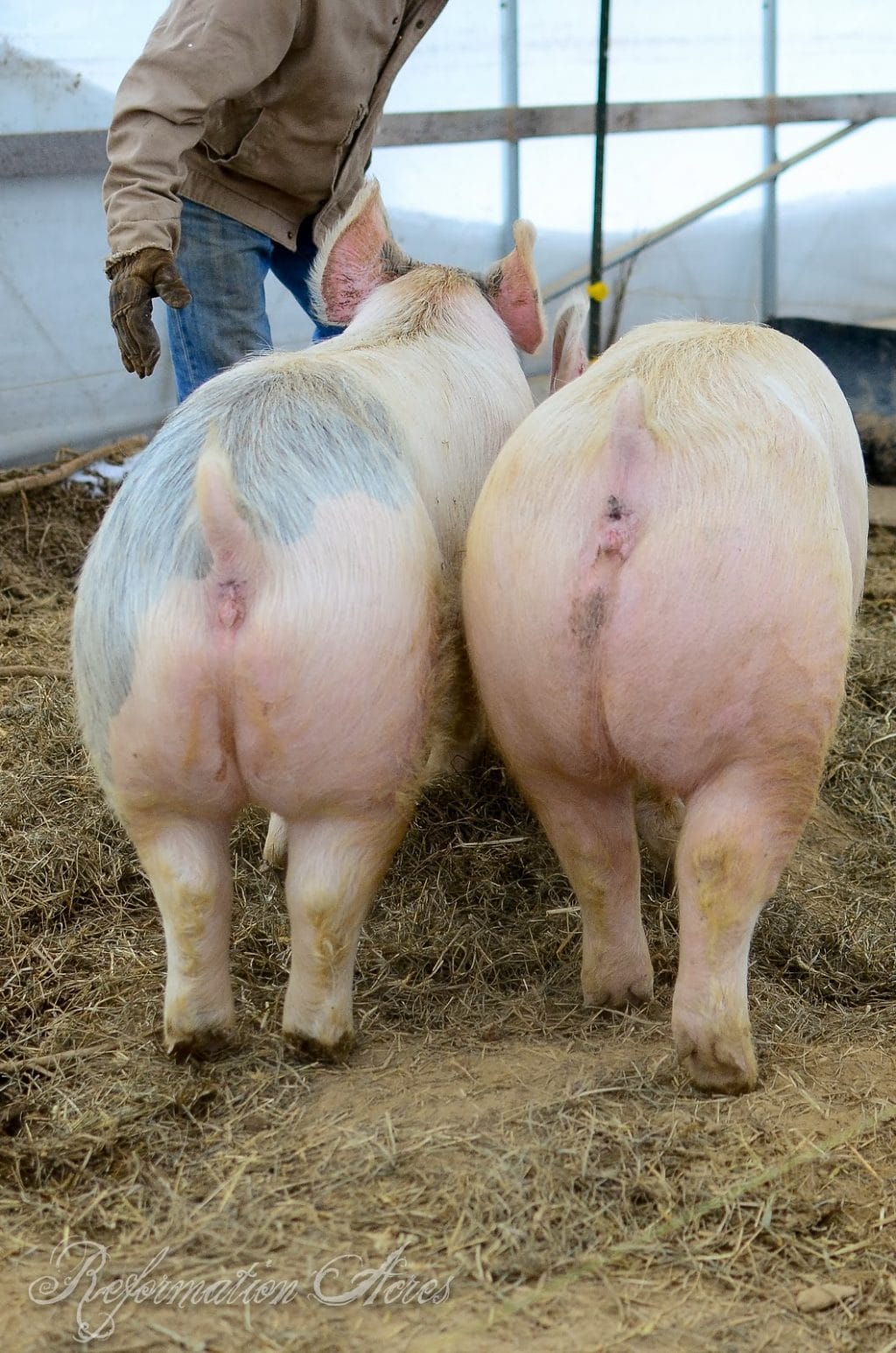 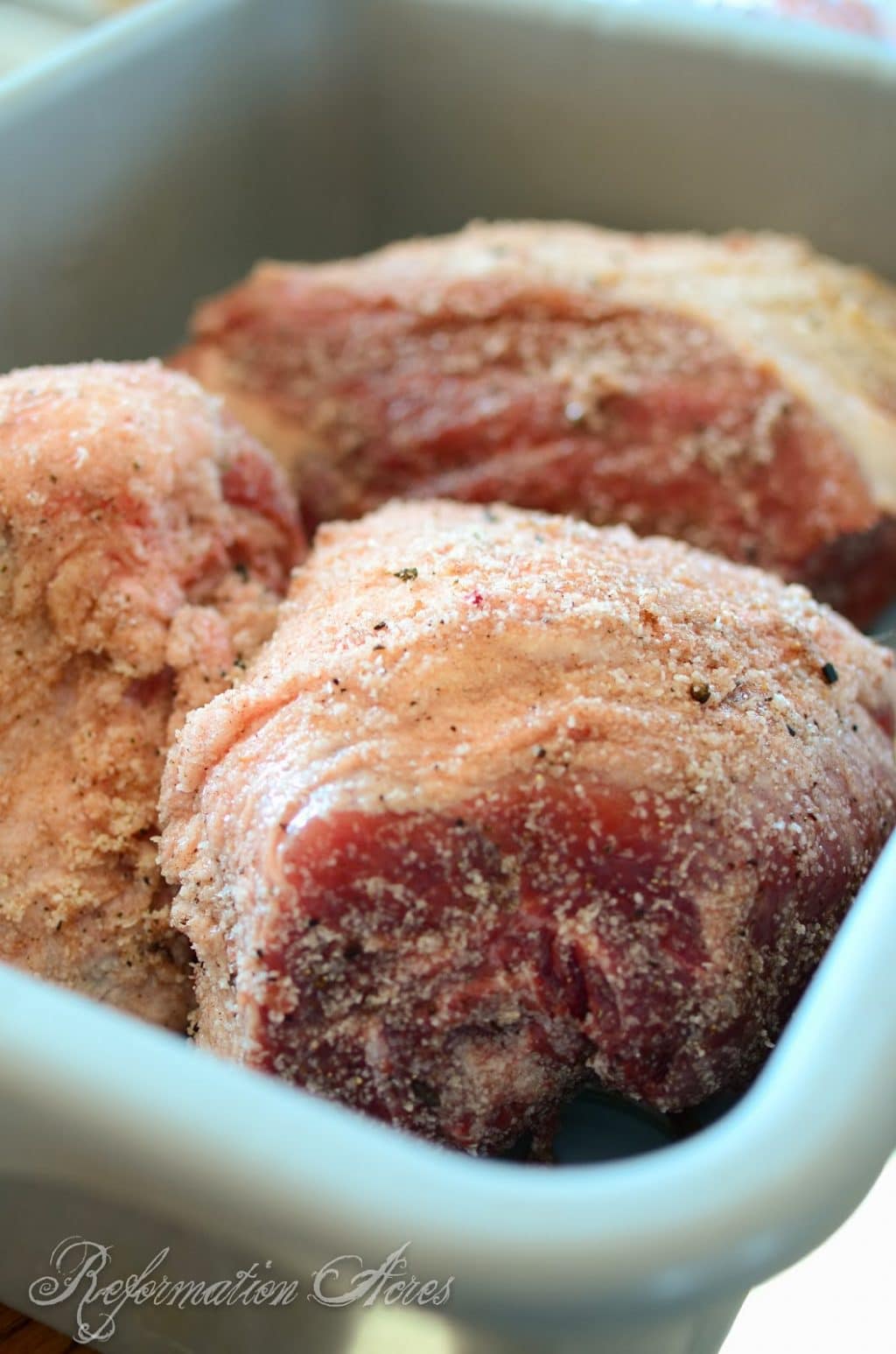 (This is one of the cure recipes we’re trying…) 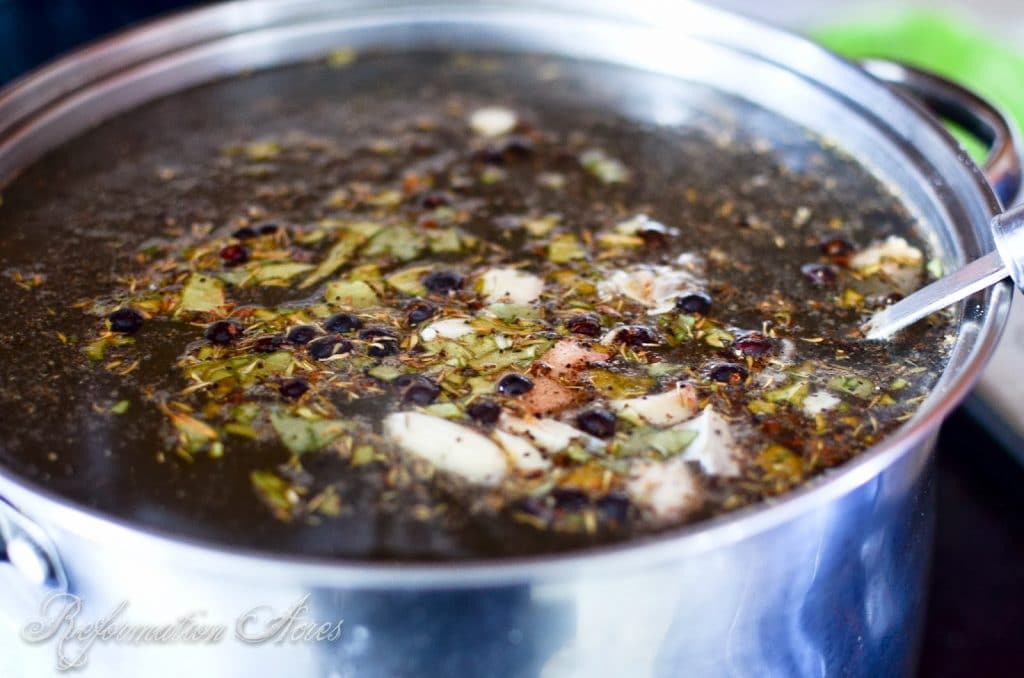 {Wet Brine for other Hams} 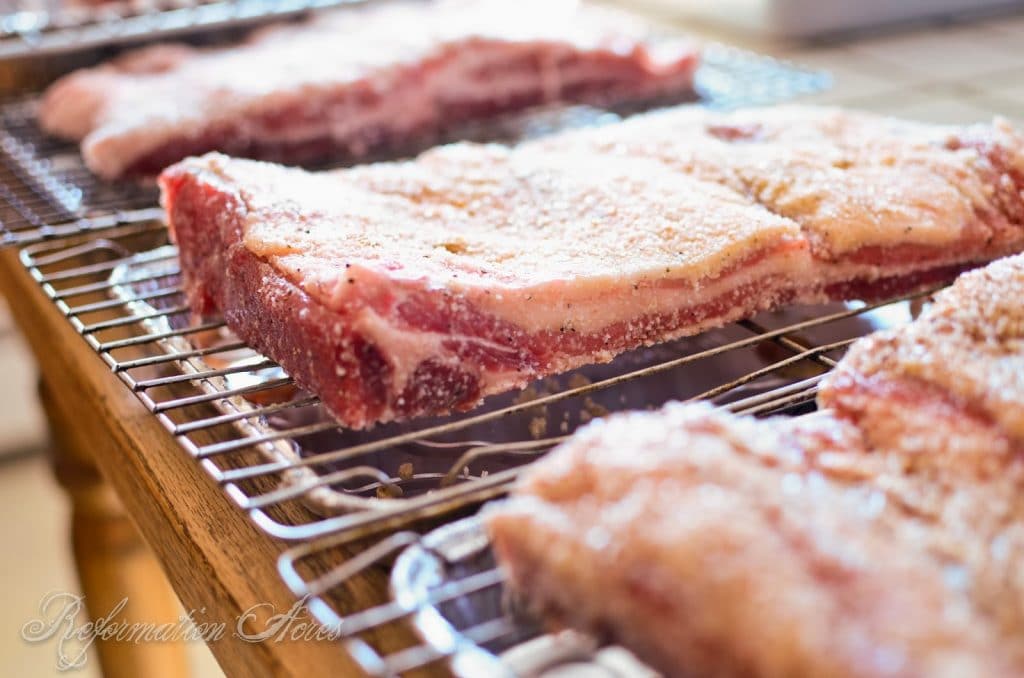 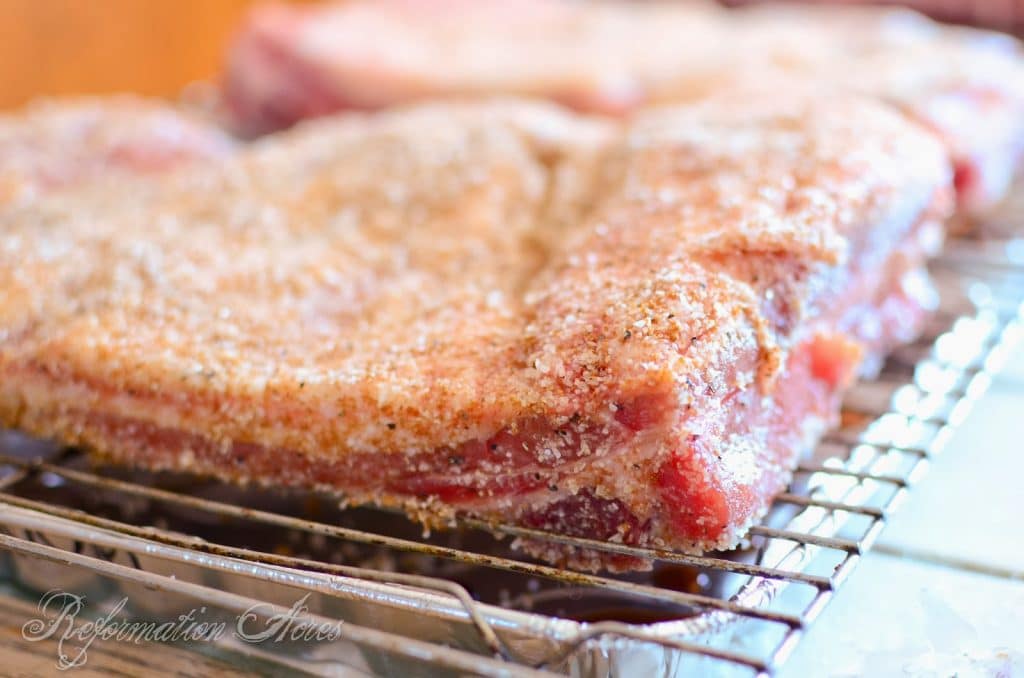 {Because one shot simply isn’t enough.} 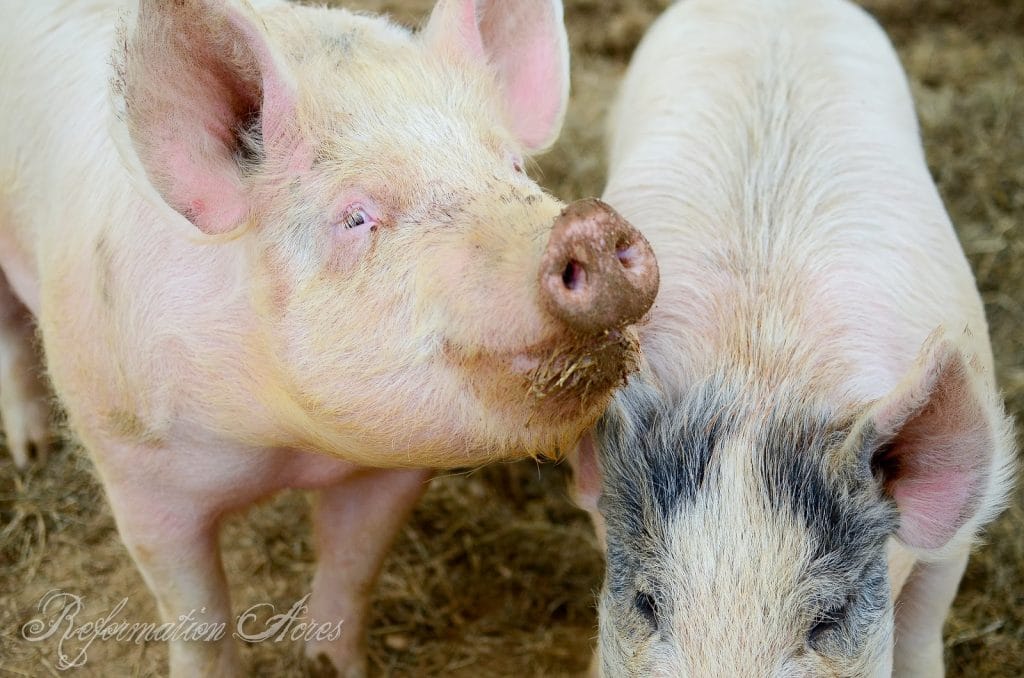 2014 Hog Butchering Part One is coming to an end.

Natural casings are being stuffed with breakfast sausage, pepperoni, and kielbasa right now… Pork belly and legs are curing for bacon and hams… Tomorrow, I’ll render the lard.
For the most part raising these two hogs was very carefree and enjoyable. Particularly in comparison to last year when we spent more time wrangling the hogs back into their pens than we cared too.
These gals were friendly and quite personable. They helped to reinforce our belief that raising hogs is one of the best ways and most cost-effective ways to get a large amount of meat tucked away in the freezer. And that we just love raising little piggies.

This year we dug out of the hole that raising the Berkshire’s burned in our pocket.  Last year we took 4 steps forward in our hog raising endeavors and this year we took 2 steps back.

Those 3 steps forward were:

1.) Raising heritage pork.
2.) Supplementing grain with veg scraps.
3.) Over-wintering pigs so we could butcher them ourselves (saving $) without worrying about the meat spoiling in warm weather.
4.) Feeding non-GMO rations.

Numbers 1 &2.
This year we went back to faster-growing Yorkshire cross bred hogs. At the time, if I had my druthers, I probably would have chosen maybe a Large Black, maybe even a Tamworth to try. You know. For the love of bacon. We were in a pinch, in a hurry, and didn’t have time to shop or wait for the right breed to come along.
But now I’m I thinking that with the absence of a passion for heritage breed conservation at this point in my life, I’ll probably stick with getting the feeder pigs from the neighbor. They’re about a ⅓ the price of heritage oinkers and grow out in about half the time, and apparently on less feed.
I’m feeding a family, not saving the world and that will have to suffice for now.
(Sorry. But learning about the pee in the gene pool of the “heritage” Dexter cattle breeds, I can’t help but be disillusioned.)
This year our 2 hogs gave us a combined total of 120-ish pounds more yield than the Berkshires and that a month sooner. We butchered these gals after having them for 6 months… the Berks stayed around for 7 months. Maybe they burned more calories while we were chasing them around….
Those Berks also ate a whole lot more food.
They ate 500 more pounds of food than the hogs from 2011 ate PLUS a 33 gallon trash tote full of veg scraps cast off from the local grocery store… EVERY.SINGLE.DAY!
The 2011 set ate about a ton of feed and these gals from 2014 ate just under that amount. They gave 50 extra pounds of meat to boot! And that in the winter when they most likely expended some of that energy in keeping warm… and this sure has been a winter when it would have been difficult to keep warm! With temperatures hovering near the 0 degree mark and brutal winds, we put them in the covered greenhouse (the one that won’t be staying), but still.
The only difference feed-wise between these hogs and the 2011 ones that might account for that difference is they drank quite a bit of milk and milk by-products thanks to Holly. I find that to be interesting.
So let’s recap.
We have bigger hogs…
on less feed…
growing outside during the coldest winter I can remember…
on milk for part of their lives…
Well that is intriguing enough to me that come freshening time next month, we’re buying a second set of feeder pigs for the year and growing them out alongside a full lactation.
I’m going to spend less time this year making cheese since I’ve decided I’d rather spend my time snuggling on the baby and as it stands I might have bit off more than I can chew in gardening what with the 2 larger gardens to tend.
Instead the plan is to make butter with the Jersey cream and hopefully make enough to provide our needs throughout the lactation and freeze enough to carry us through her dry period next year too. But that’s like 275+ butter. That’s a lot of butter…
And a whole bunch of skim milk that I’m sure not going to drink! Blech! Plus there’s a rumor floating around that skim milk makes you fat. (Oh the irony!)
So stay tuned to the results to be posted in about 7 months, Lord willing.
Now onto the stats for Round One…
But first a recap:
{Cost Analysis 2011}
Expenses- $690.51
Yield- 413 lbs.
Price per Pound- $1.67 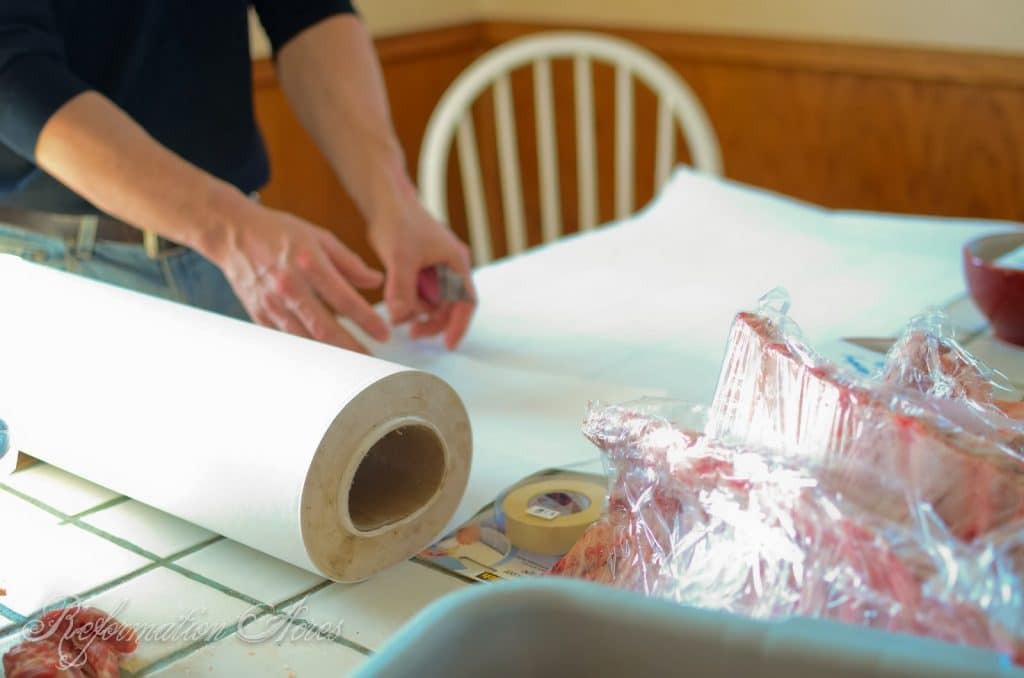