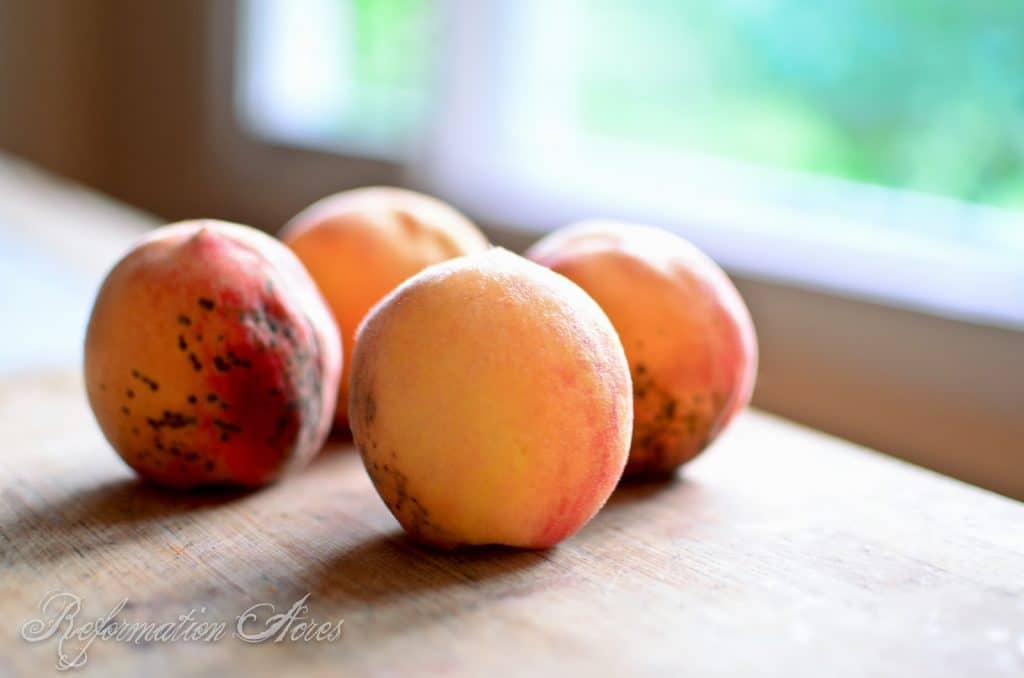 It may take a little extra time and effort to track and record what your homestead is producing, but at the end of the year, it is well worth the work when you see just exactly how much food you could grow on your land.

I always have found it to be very rewarding in past years, but even more so this year!

Ever since we decided that we were going to allow our garden a period of rest and recovery during the 2013 growing season (April 2013-April 2014), I was quite eager to see just exactly if and how the Lord would provide for our needs.

Providentially, it turned out to be a blessing because any investment into the garden or homestead would have been a waste of time and money since He opened up the opportunity for us to move to a larger homestead in August that will allow us to provide for more of our family’s needs in the future. 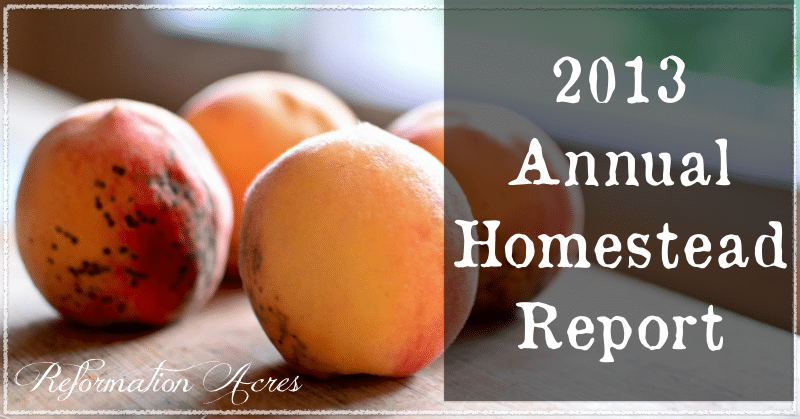 Since I began keeping records of our homestead yields, I have found it fascinating to watch the varied and sundry ways in which He has provided food for the nourishment of these little bodies He has given us to care for. Whether in the form of zucchini in 2010 or tomatoes in 2011 or berries in 2012, when one crop has failed another has thrived. And with all of these variances taken into consideration, the yield has always been about the same. Somewhere in the neighborhood of 2400 pounds of food from off our (former) 2 ½ acre homestead.

Although I can’t as in former years say, we harvested X amount of food off of X amount of acres, I am thrilled to say that we nearly doubled our harvest in 2013…  during a year of garden rest!!

Between the meat, eggs, milk, established berries, and handful of vegetable plants the previous owners planted before moving, we harvested 4,893 pounds of food between the 2 ½ acres we began the year on and the 7 ½ we finished the year on!

What made the difference?

•We raised pork this year. Due to trying to get on a winter butchering schedule (which saves us substantially in butchering and packaging cost) there was no pork harvested in 2012, but in early 2013 instead.

•Our 2 ½ year old steer was butchered in December adding even further to the meat in the freezer.

•When our dairy cow died the day after we moved in, we had to make the decision either to feed the calf expensive milk replacer or invest that money (probably less) into a dairy cow that was already lactating and could provide milk for the calf. Not only did that decision end up paying for itself in the milk replacer savings, but the Jersey we bought gave us an abundance of milk that our Dexter had never been able to come close to! And that in the less than full lactation cycle that we owned her!

•Our new homestead is simply burgeoning with fruit in the form of grapes, blackberries, elderberries, and raspberries and when we moved in we were able to take advantage of that and gather the ripe fruit.

•But before moving we were able to make maple syrup, gather wild honey, a pound of peaches, and a few other odds and ends remnants from the 2012 vegetable garden such as carrots and kale, garlic and strawberries.

Here are the totals of what I recorded during the past year:
(Not included, of course, are the amounts of produce that the children – and husband- snacked on straight off of the plants!) 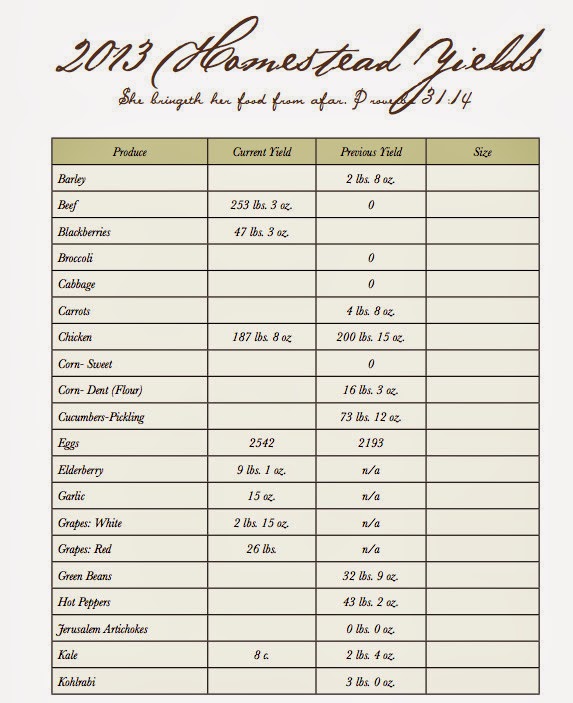 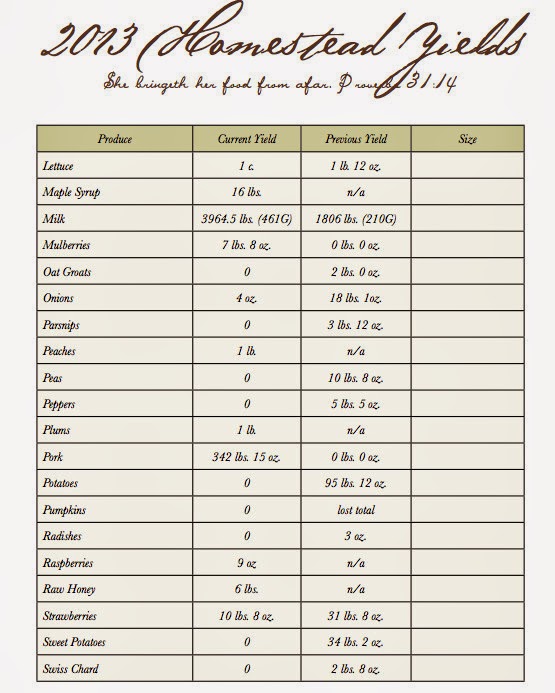 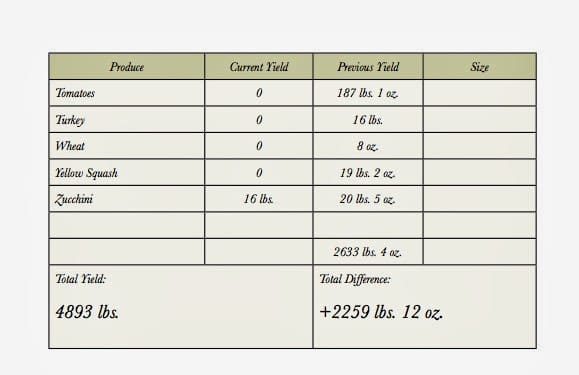 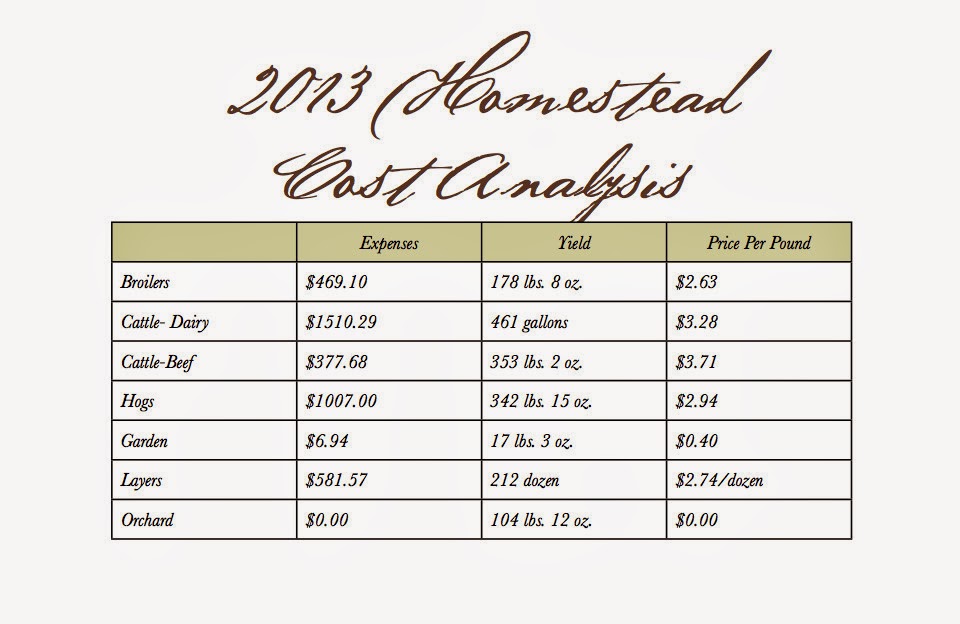 Do you keep track of your homestead yields?