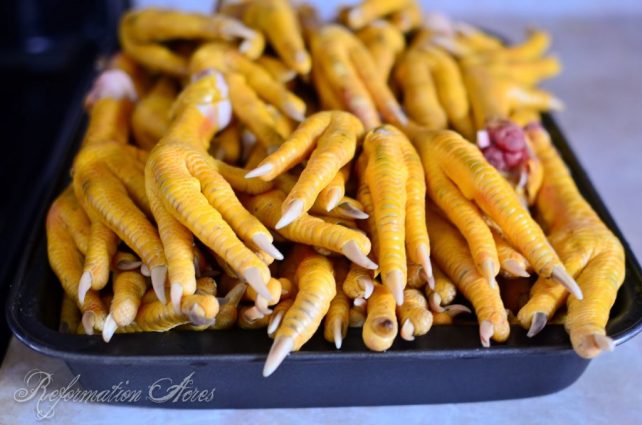 Chicken feet add rich flavor, healing nutrients, and gelatin to you soups, stews, and bone broths. But first you need to know how to clean chicken feet to prepare them for the stockpot. No you don’t eat them! It really makes for a delicious, dare I say, superior meat stock.

There’s nothing like raising your own meat to make you really appreciate the value of the creatures’ life, not to mention your own hard work and financial investment in each animal.

It makes you want to do things that you never would have dreamed you would have done before.

It makes you want to make the most of your meat.

And when you realize the nutritional value within the depths of the often overlooked parts of the animal, one of those things it makes you do is peel chicken feet. 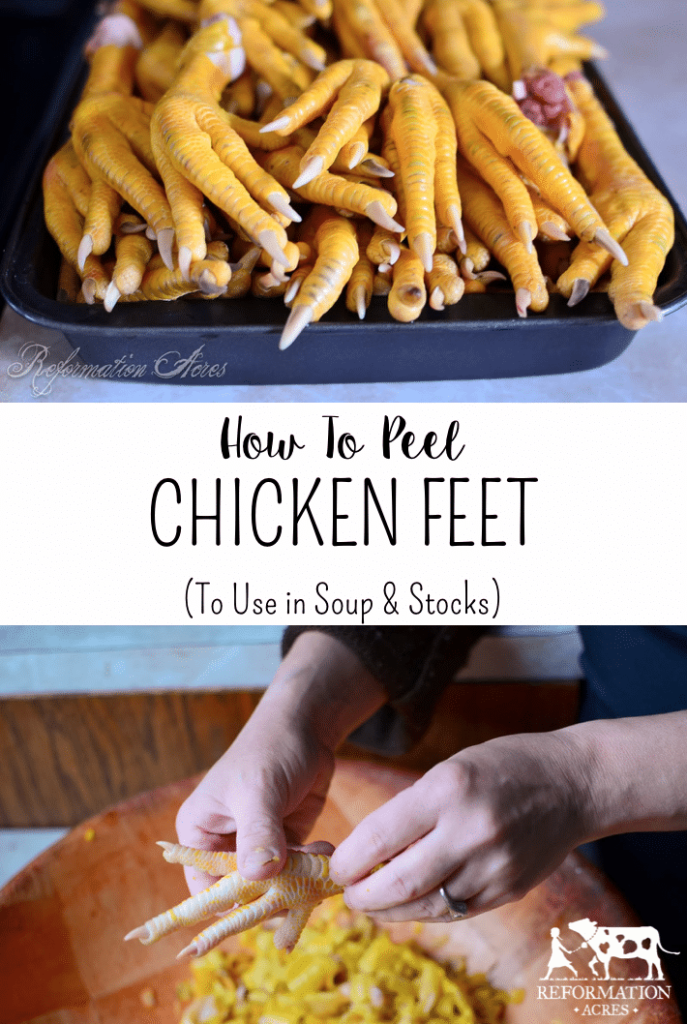 Chicken feet not only increase the depth of the flavor when added to soups, stocks, and broth, (such as the case when a few are thrown in with Chicken Soup or Chicken and Dumplings), but by adding the feet you also kick the nutritional value of your meals or stocks up a notch through the addition of gelatin, collagen, anti-inflammatory properties, and calcium.

Peeling chicken feet isn’t difficult, but depending on how many you have, it can be tedious work.

I find a podcast or sermon to listen to while peeling to help the time go buy more quickly.

This time, I ended up with about 60 feet to peel. They had been previously frozen. This was the first time I didn’t get around to peeling them within a day or so of harvest and I did notice that peeling them wasn’t quite as simple after they were frozen. 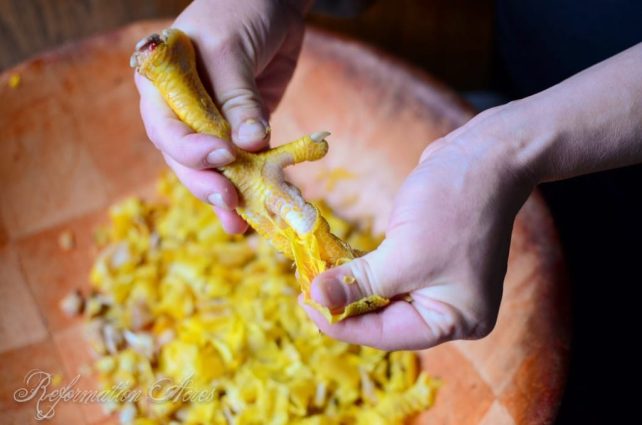 How to Peel Chicken Feet for Making Stock or Soup

The set-up you see below is my assembly line. First, you have the pile of unpeeled feet.

Followed by a stockpot of boiling water.

Then a bowl of ice water. Both of these will probably need replenished throughout the process if you’re doing a big batch of feet.

Finally, you need a bowl or container to put the scales in. 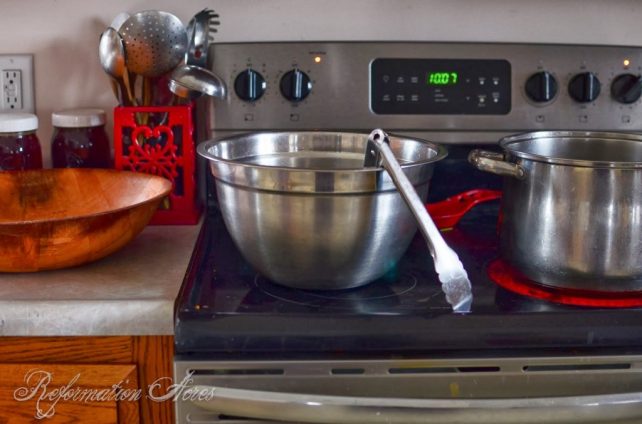 •Once your water is boiling, drop in a few feet at a time.

Note: Working in small batches is essential. Don’t rush it. In the end, it will take  you longer to peel a foot that has been sitting in the ice water for a long time. My first foot consistently took me less than a minute to peel and afterwards I could count on doubling the time for each successive foot.

I boiled no more than 4-5 feet for each batch.

The longer you boil them, the more difficult they become to peel. The scales will begin to adhere to the flesh underneath. Resist the temptation to think that by cooking them long, the scales will peel more easily.

•Plunge the blanched feet into the ice water, give it a swirl and then get peeling.

Near the joint, you might have some scales flapping off. This is a great place to start peeling.

With the feet I’ve done in the past that were NOT frozen first, this piece usually peeled off in large pieces right on up to the padding of the foot.

If you’ve timed it properly and they haven’t been sitting in the water too long, when you get to the toes, the scales should turn inside out and peel off like a glove.

Even the toenail has a covering and will pop off. You might need to give the scales around the toes a twist to loosen them before pulling.

Sometimes the scales on the top of the foot will adhere and not peel off. One benefit I found of having had them frozen first is they were a little softer. When peeling fresh feet they were sharper and would sometimes cut underneath your nails and after awhile that becomes rather uncomfortable- even painful.

Perhaps the peeled toes disgust you? Kitchen shears will take them right off, no problem. Hold them firmly over the bowl or they’ll go flying and you’ll be finding toes lying around the kitchen for days. 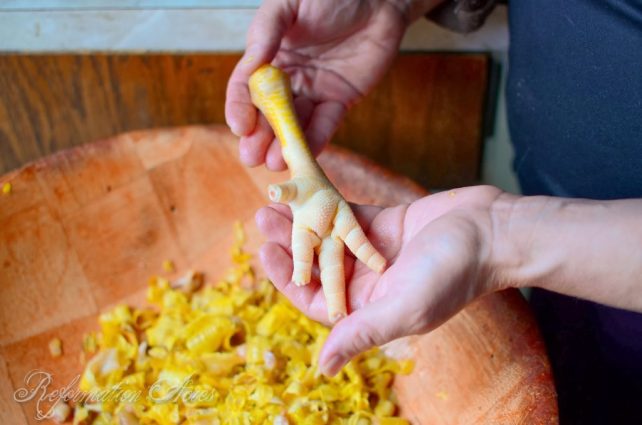 The finished product. All ready for the stockpot.

These will go back into the freezer and whenever I’m going to make a soup or stock, I’ll pull out about 5 or so frozen feet and toss them in with the other ingredients. 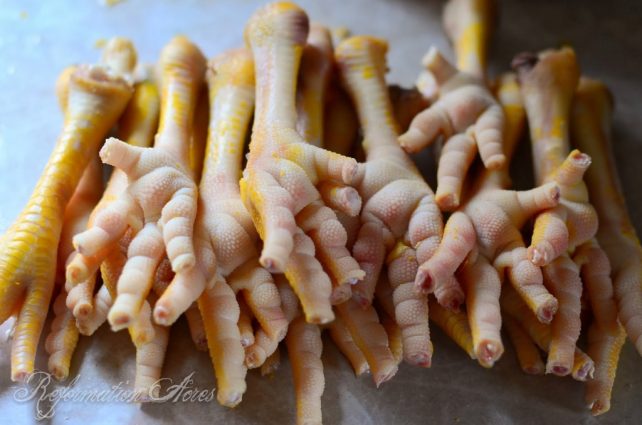 Have you ever tried preparing your stock or soup with chicken feet?