I don’t know if it was because it was almost surreal that we were actually going after all this time, or that my first trimester discomforts and exhaustion seeped well into the second trimester or that orchestrating the moving a large family and homestead across the state is no easy feat, I felt I had very little excitement leading up to this move.

I guess I figured I’d have time to be excited when we got here.

I was more than a bit nervous about driving the van for 3 hours. More often than not, I’m a passenger and when I’m pregnant, there’s nothing like getting in the van to put me right to sleep.  And here I was driving for so long down strange and unfamiliar roads… I was sure I was going to have to fight sleep off especially after such a long day.

But since we left so late in the day, the sun was at that point in setting where my vizor wouldn’t block it and between that and the paranoia that one of the loose cats would jump over onto me kept me awake.

About half-way through the trip, Tom Kitten (who is no kitten any more, but a 3 year old brick house of a tom cat) started struggling furiously in Jared’s lap in the passenger seat and knowing how I was nervous about it, Jared held him tightly so he couldn’t jump away.

And so- Tom relieved himself.

Right there on Jared’s lap.

And it didn’t smell pretty.

And it turns out he had worms.

I flashed Bill and proceeded to pull over. Thankfully he saw me and pulled over too and came back to see what was wrong.

God bless him, he even cleaned it up for us while my head was hanging out the window gagging.

Another cat jumped out of the van while he was cleaning it and thankfully didn’t go any further than under the van.

I was worried in the days leading up to the move if we’d leave a cat behind or if they’d run away once we got here, but all four have stuck with us and I couldn’t possibly be more grateful since it turns out there is a terrible mouse infestation in the barn. I mean you see a dozen in the daytime terrible. A neighbor told us that the previous owner didn’t like cats… You can definitely tell.

The rest of the trip went well enough and I didn’t have to worry about falling asleep anymore. In fact I found a little extra lead in my foot and my sole thought was to get to the new home as fast as humanly possible.

When we arrived it was after 10pm and it was quite dark. (It’s amazing how much more brilliant the stars are when you get away from the town’s lights. And if you can actually see the sky because you don’t live in a hole, surrounded by trees.)

Bill’s first order of business was to find a flashlight while we took the cats to the barn and locked them up.

We went down into the barn and shined the light in the stall and saw Maybelle just standing there next to a little black calf!! She had had her baby sometime in the last 24 hours.

Bill went into the stall and gave Maybelle a good rub-down telling her what a good girl she was and took a peek at her backside to see how things looked before going to check on the calf.

A peek between the legs revealed it was a little heifer and she didn’t like her privacy being invaded so and stood up and went to mama. We all marveled at her long legs. She is petite so that made them look even longer. The calf is a Dexter-Devon cross and though the bull we bred Maybelle to is supposed to make small calves who grow quickly, I was still a bit concerned about having bred her to a slightly larger breed. But Dexter’s are supposed to calve very easily and when we watched her calf Pepper last year, she certainly made it look as though she had no troubles so I was indeed making a mountain out of a molehill.

When the calf stood up, she stretched and moved her bowels.  She looked dry and her umbilical cord was shriveled and dry, so remembering that Pepper was still pretty wet 8 hours after birth figured she was probably born earlier in the day (our neighbor has since said they noticed the calf that morning).

Bill gave Maybelle a scoop of grain which she ate and then it was off to start unloading the cold food and finding bedding and pillows for the night. It was very late and we were all very tired. 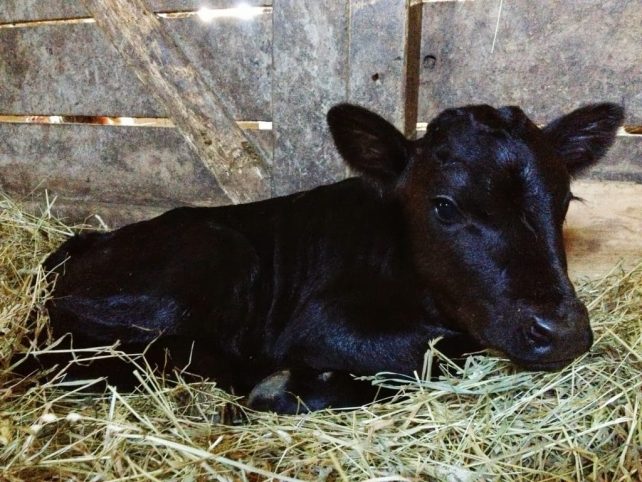 Bill was up at dawn. Although he was tempted to sleep in, he wanted to go check on Maybelle and the little heifer.
It was still very dark in the barn and he came back in for the flashlight. The first thing I remember hearing that morning was him saying, “I think Maybelle’s dead.”
The words snapped me awake and I told him to shut-up because that wasn’t funny. He likes to say things like that to me to see what my response is and for the most part I’ve learned to ignore him knowing it takes all the fun out of it. He insisted however that he was serious and that she was just laying on her side in the stall, unresponsive.
I took the bait and threw my shoes and a jacket on and went with him out to the barn and sure enough there she lay.
She was still warm, her limbs moveable. But not breathing. She had to have died very recently.
I did what I do best and went back in and got on the internet to figure out what to do next. We hadn’t seen the calf eat because of the time and darkness the night before and I wanted to learn what to do to keep her alive. 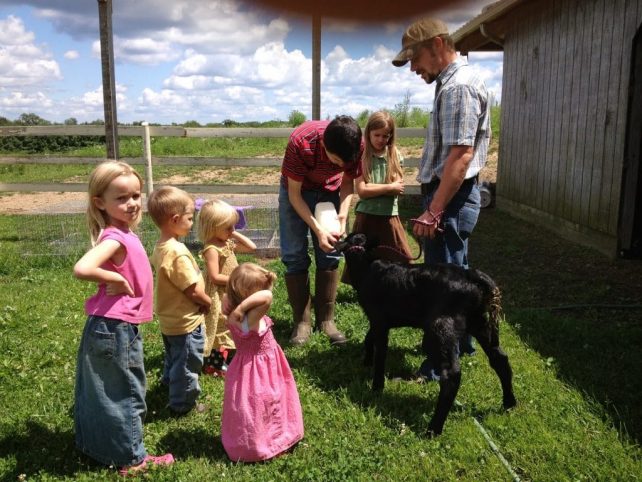 Bill milked out all of the colostrum from the dead cow and thankfully with it being 6am on a Sunday morning and stores far away and closed, we had a calf bottle from when Gus was a calf and wouldn’t nurse at first.
Jared adopted the little heifer as his special charge and faithfully warmed her bottles of colostrum and later mixed the milk replacer, getting up several times a night to go feed the baby. 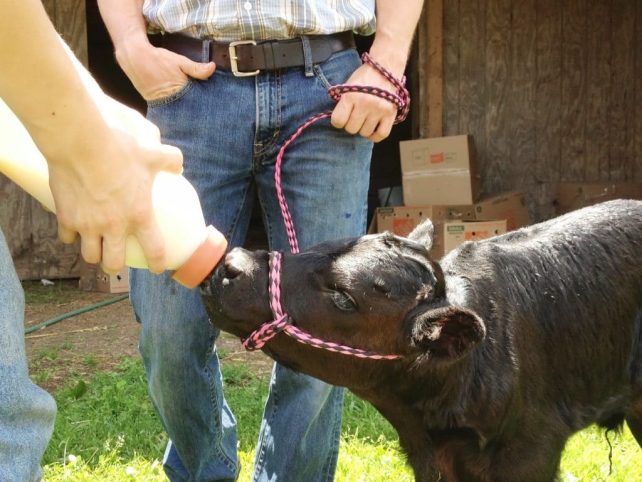 I tried searching for as much information as I could in order to figure out what was Maybelle’s cause of death. But without symptoms, it’s hard to really know in which direction to look for answers.

Bill had seen her Friday night and said she was fine. He walked through the pasture and she was following him around. She didn’t look any different than on Thursday so far as signs of labor. He said through the whole move she seemed relaxed and not stressed at all.

Sure, the night before when we saw her in the barn, her head was kind of down a bit, but it was pitch dark in there and we were shining a flashlight on them. I wouldn’t have looked into the light either. To me she looked like a tired cow who had just given birth and we had disturbed her rest.

Like I said, Bill had checked her backside while petting her the night before so we know that her uterus didn’t prolapse, but he says he didn’t notice that string of blood/membranes that hang out for a day or so afterwards. Looking over her after she died, we didn’t see anything hanging out of the vulva then either. She did have hemorrhoids and her vulva was slightly open.

We discussed it and  thought it couldn’t hurt to check so Bill checked for a second calf or to see if she was trying to push something else out, but couldn’t feel anything.

So see, few symptoms to go on.

The only other thing I can think of is that she did have diarrhea pretty bad for about a week leading up to this (while Gus didn’t so it wasn’t from some high-protein forage they found), so I didn’t know if it could it be from dehydration? Her water which was filled Friday night was still full to the brim on Sunday morning but we had had some seriously heavy rain all night Friday and into Saturday morning that could have kept it full.

Jared thinks it’s possible she ate something poisonous in the new pasture like milkweed or something, but I think that seems unlikely to me. They seem pretty smart about that sort of thing.

Although a couple friends have suggested a possible uterine perforation that caused internal bleeding, it frustrates me to end up with nothing concrete because I won’t know what to do differently next time. I like to at least learn lessons from failures… 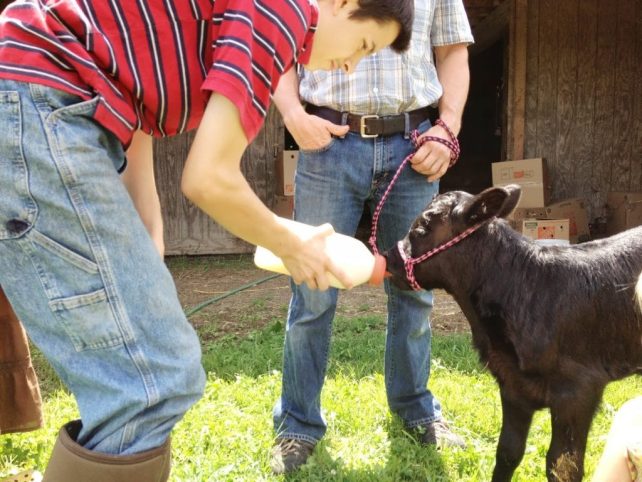 I know that God’s timing is perfect. Down to the minute. It’s undeniable to me that he orchestrated every delay and advance of this move over the last nine months right down to the last few days prior to the move and the delays of moving day although it was hard not to wrestle with it some that day thinking if we had just moved a different day, a different week, would the outcome of her birth been different as well?

And we know that all things work together for good to them that love God, to them who are the called according to his purpose.- Romans 8:28

At any rate, it made for a rough beginning. Certainly not a very encouraging way to start a new homestead! But we had to move on. The truck needed unloaded and returned and we needed to find the closest Tractor Supply to get supplies for the baby calf, and we needed to figure out what on earth one does with a such a large dead animal that they don’t intend to eat. 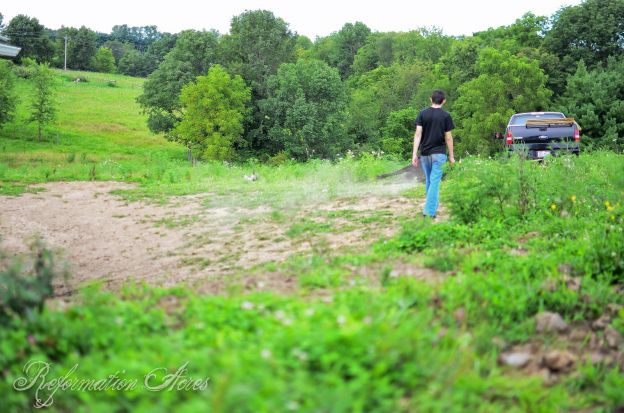 The electrician who wired the house for us last month is also our neighbor and he also has an excavator and although he was out of town, his teen-aged son came over the next day and dug a hole in the bottom of the pasture to bury Maybelle in for which we are very, very thankful. 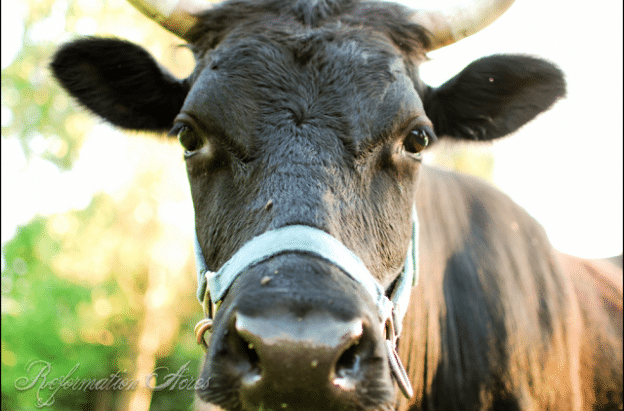 It was hard for Gus and he bellowed for her for days. And it was hard on Rebekah for whom Maybelle has been part of her life for as long as she can remember. She kept asking me, “Where’s Maybelle?” The other kids were sad, but the excitement of the move and the new baby calf I think overshadowed it some for them.

What surprises me is how much grief this has given me.

I guess I’m able to make a disconnect with animals who come to the “farm” in order to be one day butchered to feed my family. That certainly hasn’t been the case with Maybelle and I find that after three years of listening to the pleasant and comforting dinging of her bell always in the background night or day, I miss her.