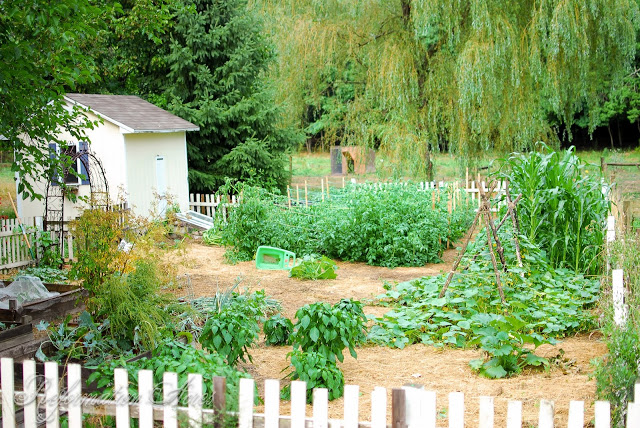 I have been an avid fan of mulch gardening for three or four years now.

I never gave much thought to what improvement the mulch was making for the soil in my garden. I didn’t care about anything other than that I didn’t have to weed nearly as much as I did the year before. Many times you hear about gardeners losing their garden to the weeds. Maybe you’ve been there yourself. I know there have been some years when  I was just barely hanging in there, but now that I’ve begun to mulch, my time spent weeding is reduced from hours and hours weekly to less than one hour each week.

Last year we experienced our first drought since becoming gardeners. Looking back, we realized that we could count on our fingers the number of times the sprinkler was hooked up. Our hay mulched garden retained the moisture wonderfully and the plants were able to withstand the heat and dryness that was shriveling crops all around us.

Not being a glutton for punishment, I’m never going back. 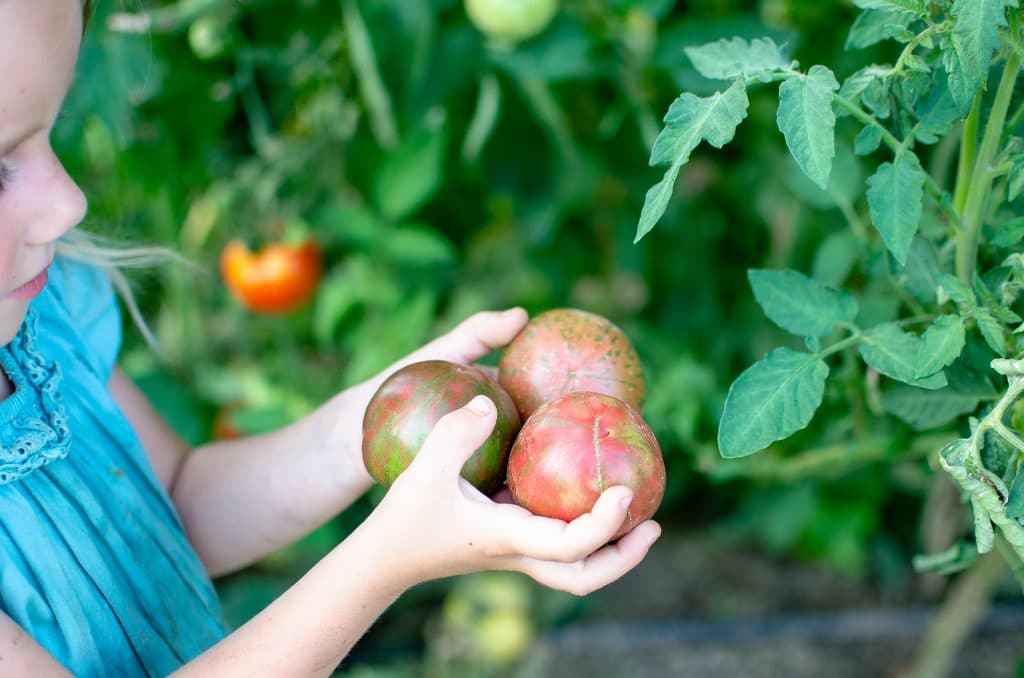 There has been much buzz this past year about mulch gardening, generated from the online documentary Back to Eden which highlights an organic garden where heavy mulching of ramial wood chips are applied to deter weeds, retain moisture thereby eliminating irrigation,  and improving vegetable nutrition.

As I first began watching, I admit I was a skeptic knowing that wood chips and wood products are to be used very sparingly, if at all, in the compost pile because their carbon to nitrogen ratio is so extreme and take a long, long time to break down.

To keep the average C/N down, I put in nothing woody, nothing with even thin bark on it: no tree trimmings, no hedge trimmings. Trust me on this; you don’t want wood in your compost! The C/N of woody materials is way too high and will degrade your compost quality. For the same reason, don’t put in any sawdust if you want your end product to have much fertilizing power. If you seem to accumulate a lot of woody plant residues, make a separate compost heap of them outside of the vegetable garden… The wood compost pile will be a slow-working, low temperature heap, and it might be several years before it seems done. When it does seem finished, do not put it in the vegetable patch. Spread it as a mulch under ornamental or under fruit trees. – Gardening When It Counts

By the end of the documentary though, the gardener had explained that the difference is made in that the wood isn’t mixed into the soil, but sits on top and therefore doesn’t pose a disadvantage to the garden.

Otherwise, I was sold by the beautiful imagery and high production of his garden. It is truly an enviable plot! In one scene in particular, I noticed a shot where you could see his garden edge and the grassy yard that surrounds it. You could see there were the lawn surrounding the garden was green, evidently gathering moisture from the mulched garden, and beyond that the grass was dry, dead, and brown.

I watched it again with my equally skeptical husband who also completely changed his mind by the end of the documentary. 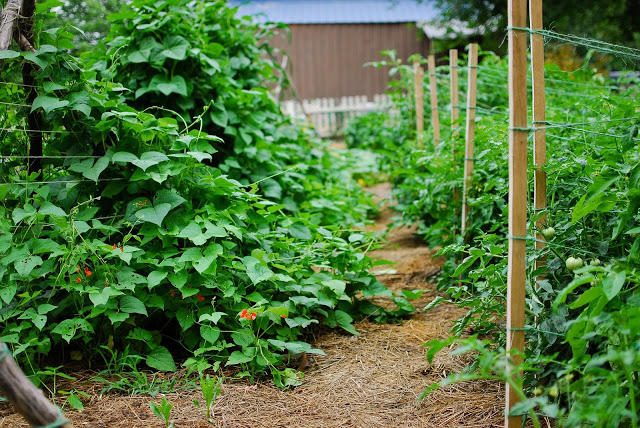 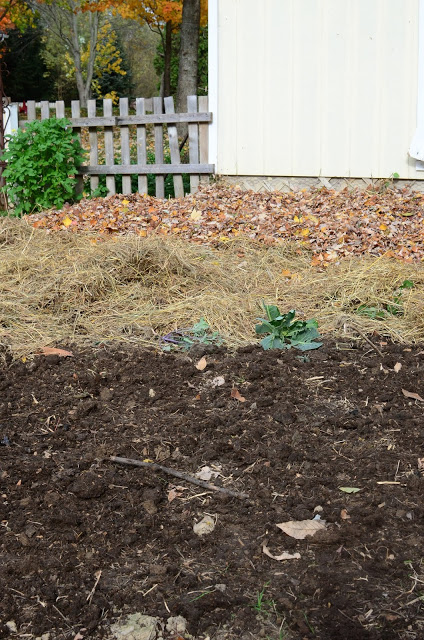 Particularly excited about the prospect of not having apply mulch as frequently (hay mulch usually needs reapplied 3-4 times a growing season), as soon as we could, we found a source of inexpensive wood chips and had 2 dump truck loads dumped in our yard for $20. Knowing that we would be taking a rest during the 2013 growing season, in the fall, I layered manure and bedding from the barnyard, fallen leaves, and all of that wood mulching- basically turning our garden into one huge lasagna garden- in the hopes of improving soil fertility during the rest.But now I’m rethinking the whole thing.

This winter, I have read a gem of a gardening book for the purpose of educating myself about improving the soil fertility this year called Teaming With Microbes: A Gardener’s Guide to the Soil Food Web. I read a library copy and as I shared snippets aloud, we decided it is a “must-have”for our bookshelf.

Amidst the mountains of information, I learned a few key details about the soil food web and how it is ordered that made a great deal of sense and lined up with the knowledge I gained after reading The Holistic Orchard last summer. 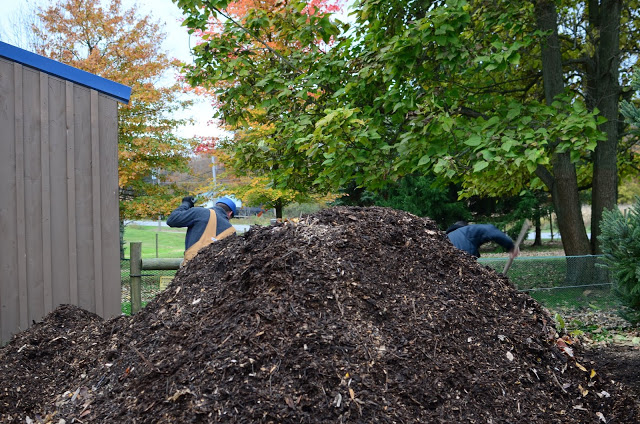 In Teaming With Microbes, there are 19 “rules” for managing your soil food web. The relevant ones to mulching in the vegetable garden are:

Connecting all of these dots, (and what I learned about organic orchard care– in a nutshell, part of maintaining an holistic orchard is to encourage fungal dominance, particularly of the mycorrhizal kind) it would seem that the Back to Eden garden is an anomaly.

If vegetables prefer bacterially dominated soils and trees soil that is dominated by fungi (supported by what I learned last summer), and if mulch worked into the soil supports bacteria and wood mulch worked into the soil skews the carbon to nitrogen ratio (supported by what I’ve learned about adding wood to the compost pile), then I should certainly reevaluate my plan of action. 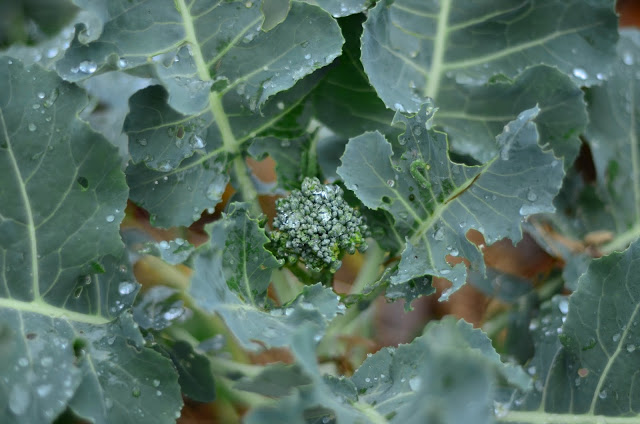 Let’s look a bit more at the last two rules I quoted above. I’m sure that most of you have never heard of mycorrhizal fungi. The term has been in my vocabulary for less than a year and even then I didn’t fully understand the implications it had in the soil food web until recently. I simply knew that it was to be encouraged to maintain soil health in the orchard and how to achieve it.

So what is special about mycorrhizal fungi?

In return for exudates from plant roots, mycorrhizal fungi seek out water and nutrients and then bring them back to the plant… Without mycorrhizal fungi, plants do not obtain the quantities and kinds of nutrients needed to perform at their best.

Mycorrhizal fungi is certainly something that those of us looking to garden organically (and by organically, I do not mean using industry approved organic pesticides and herbicides which still indiscriminately destroy the soil food web) should be seeking to encourage in our gardens and orchards, yet recognizing the differences in each system. 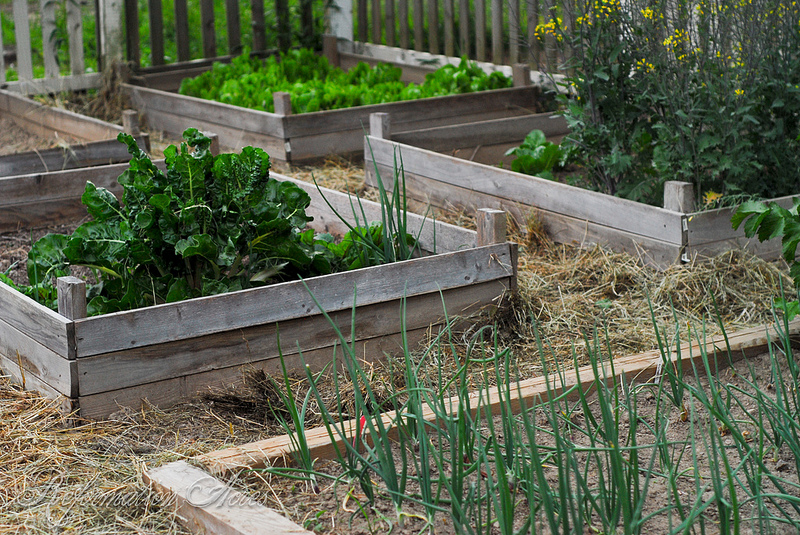 One of the things that really drew me to the Back to Eden method of garden mulching is the appeal to created order that was made. (The gardener’s ability to draw upon Scripture was admirable and his desire to look seek the Lord’s creation for wisdom laudable!) And it would seem that his original application (the orchard) was a correct one, but the issue was in his drawing it into the vegetable garden.

(In regard to rules 2 & 3) These two general rules take the guesswork out of what could have been one of the most difficult things about starting to garden with the soil food web. The rules make it easy to figure out what likes what, but once you understand what is behind them, you will appreciate them even more… Early succession communities are bacterially dominated. As more and more organic litter accumulates in the waste products from these organisms and the plant life they support, fungal spores finally have enough nutrients at hand to germinate. With a place to take hold and the resources to support themselves, the resulting fungi thrive.

Many other factors are involved, but to stick to what concerns us: as plant life and the soil food web become more varied, fungal numbers increase and more short-lived plants like annuals give way to more permanent, perennial grassland plants. More organic matter is produced, providing food for ever-increasing fungal populations. Shrubs move in, followed by soft hardwoods, expanding saplings, mature hardwoods, and finally the kinds of conifers you find in old growth forests. All the while, fungal biomass grows in proportion to bacteria, which cannot possibly compete because they are limited to digesting simple sugars and other carbohydrates- which are in limited supply given the ever-increasing mass of more complicated plants full of lignin and cellulose.

Moving from the beach, so to speak, to grasslands to old growth conifers, fungal dominance increases in the soil each step of the way. Part of this increase is explained by the tentative nature of early plant life. It is hard to form mycorrhizal relationships with plant roots when the plant dies after only a short period of time.

From this we learn that by observing created order for the entire cycle of plant growth in a given area, our annuals and perennials that we are growing to feed ourselves best thrive in soils that are not the same as would support mature hardwoods and conifers where you find that beautiful fungal duff. 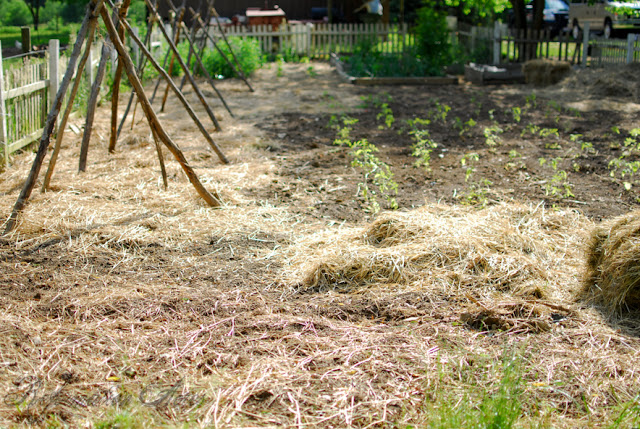 Now after completely rethinking mulch gardening, I will no longer pursue converting my garden into a Back to Eden style garden. I will be looking to emulate the model set forth in Teaming With Microbes for promoting a soil food web best suited to what I will be growing in a given area- bacterially dominated vegetable gardens and a fungal domination in my orchard.

Mulches are easy to acquire and relatively easy to handle and use in support of your soil food webs. Simply apply the rules and the appropriate mulch (green or brown; wet or dry; coarse or fine) in the appropriate way (dug in or on the surface) around your plants (vegetables, annuals, and grasses, or trees, shrubs, and perennials). Be careful: add a layer any thicker than 2-3 inches and you may end up blocking moisture and air and smothering mycorrhizal fungi.

Lawn clippings are a terrific green mulch to use around your annual flowers and your vegetables during the growing season. Even though they lose their color and turn “brown,” they are still considered “green mulch because when they were cut, they contained sugars that remain even after the chlorophyll has faded. The same is true of straw. 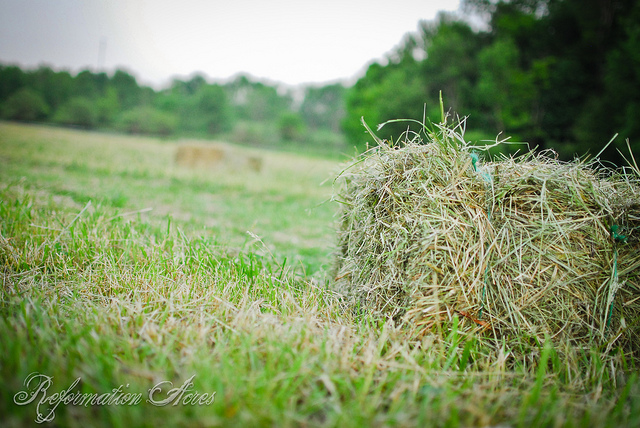 When the weather warms in the coming weeks I’ll removing all of the wood chips we laid down in the garden this fall. I’ll spend my afternoons hauling load after load across the yard to the orchard. It is slow, heavy work moving the wood chips (another disadvantage over hay or straw or grass), but I’ll be glad for the excuse to be out in the sunshine working my winter-weakened muscles. Then it will be time to start seeking out some barns that need their floors cleaned of last years hay before the first cutting is brought in.

*Unless otherwise noted, all quotes are from Teaming With Microbes.

In the continuum of solar-to-biomass conversion, grass is number one, bushes number two, and trees number three. -Joel Salatin, The Marvelous Pigness of Pigs