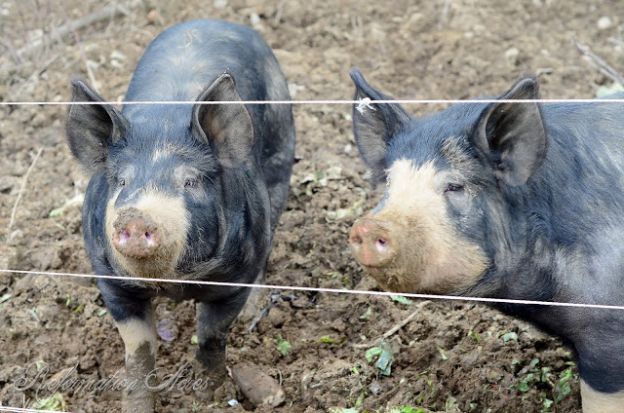 With butchering and processing of the hogs behind us, I was eager to see how things stood from a financial perspective.

There were several different factors that were changed in the way we raised these pigs this year. A few were intended to reduce the costs of raising our own meat even further. A few to improve the quality.
Among the changes were: 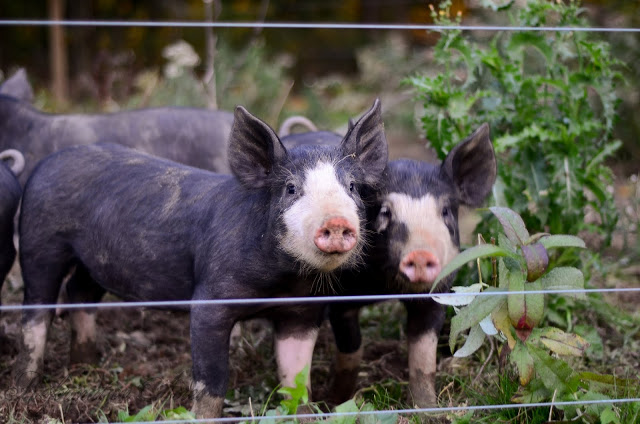 {Breed}
We opted for a heritage breed, Berkshires, this year instead of the pink cross breed.
Selecting a heritage breed most likely also played into how quickly the hogs grew. We should have purchased the feeder pigs earlier but couldn’t find a breeder. They also should have grown longer. Cold weather can start getting sporadic this time of year (case in point- it’s in the 30’s this week and last year it was in the 70’s) and we had to harvest the meat while there was an opportunity.
Although the Berkshire feeder pigs should have been more expensive, when we did finally find a breeder, the price was the same as in 2011. I would guess because it was off-season (September). Otherwise a heritage pig should cost more, maybe double. Were we to go the heritage route again, I wouldn’t expect to find that good of a deal again.
{Feed}
Having finally found a source for GMO-free grain, these hogs were fed the slightly more expensive feed. The grain is organically grown, but not certified.
I rightly expected this change to have an impact on the budget, but hoped to offset that by heavily supplementing with vegetable scraps. 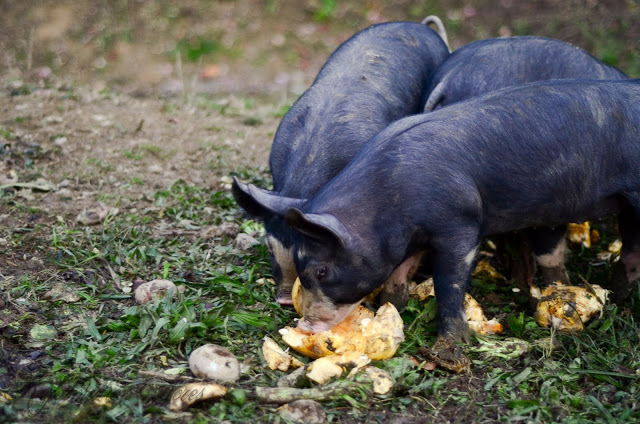 Unlike any hogs we raised in the past, these hogs were given a constant diet of produce scraps from the grocery store. Two 33-gallon sized trash cans of out-dated produce were picked up every evening.
I had really hoped to see a significant overall reduction in the quantity of feed we had to purchase this year. In 2011 the two hogs averaged a ton of feed (give or take a couple pounds). This year, to my surprise, the average went up! To the tune of almost 500 pounds!! 2400+ pounds of grain in addition to daily produce scraps. What pigs!!
{Season}
In order to facilitate homestead butchering of the hogs, we raised them off-season so that the weather was cold when it was time to butcher.
In past year’s we always bought the pigs in the spring, but since we intended to save a couple hundred dollars on butchering costs, have the benefit of using a few of the spare parts the butcher’s normally dispose of during processing, enjoy the experience of butchering our own meat, and being able to enjoy the fruits of our labor immediately rather than waiting weeks for the butcher to return our pork to us, we decided to raise this group over the winter months. Since butchering outdoors is best done when the temperatures are in the 30’s, the hogs needed to be processed before warmer spring weather hits as I mentioned above.
Over-wintering hogs outdoors could have also factored into the increased feed consumption since I imagine their bodies needed more fuel to stay warm. We attempted to deal with this issue by increasing the amount of corn in their grain ration, thinking the corn would help them put on (or at least retain some fat). 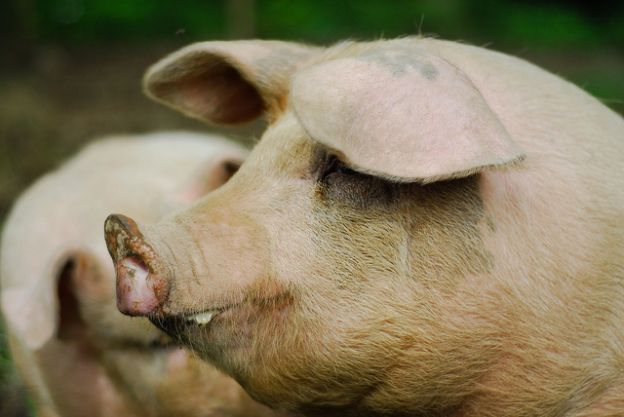 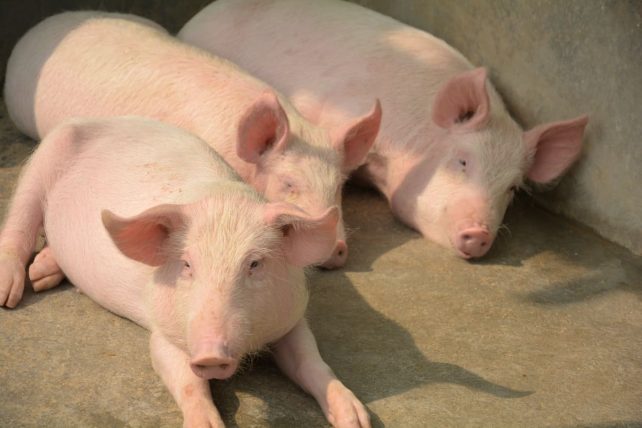 That’s a resounding, “No.”
But since so many factor’s did change this year, it’s difficult to determine which one had the most impact on the budget.
Unless we are able to get our hands on a heritage breed like Large Blacks or Tamworths who are said to convert vegetation into meat more easily, we would definitely not waste our time hauling and picking through the produce scraps. (The packaging was not removed and they needed to be opened and disposed of.) 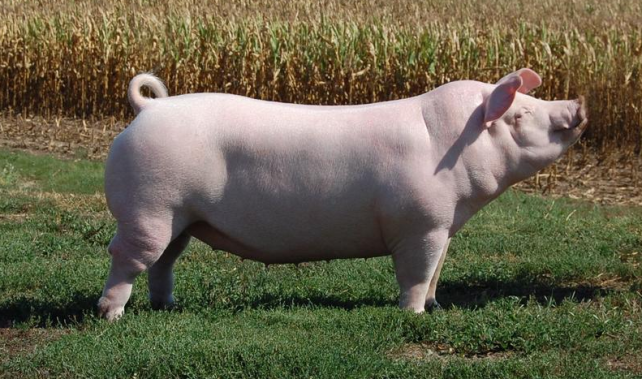 We intend to continue purchasing non-GMO feed. It’s simply worth the added expense. If you consider that GMO-free Berkshire pork sells “locally” (nearest is an hour away) starting at $7.00 per pound, we still did pretty good this year.
We will continue to over-winter hogs as well. The fact is, we enjoy butchering our meat. Well pork. Chickens gross me out. It saves a significant amount of money, is less stressful for the hogs not to be loaded up, starved for a day, and killed away from “home”, and is less stressful for the humans. I hate trying to make a pig deliberately move from point A to point B. It’s virtually impossible, so it seems and it’s just easier to walk up to them while their head is in a trough and pop them one. Done in less than 5 minutes. 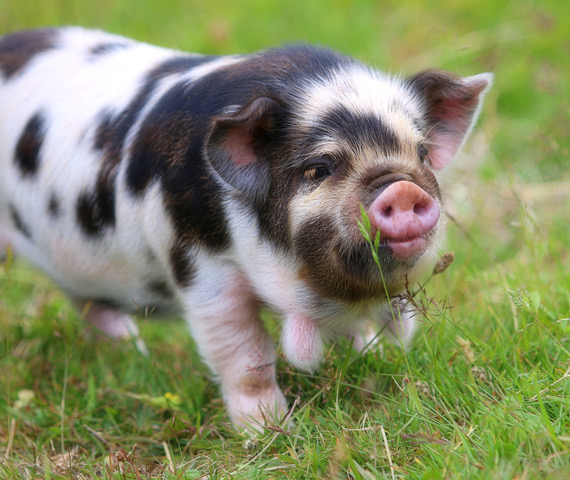 As requested, during the slaughtering and butchering and processing this year, I took a ton of photos and videos that I’m working through in my spare time. Right now I’m thinking of making a “page” on the blog where it will all be compiled complete with links and other useful information and videos and resources (easy access will be had anytime through the side bar). Then I’ll post the link each time I make an addition that will come through the feed. Since a “page” doesn’t get picked up by the feed and a post does, those of you who visit for reasons other than the blood and guts won’t be subjected to it.
For those of you who like the blood and guts, look forward to videos on slaughtering, eviscerating, breaking down the hog into primals and cuts, making natural casings, rendering lard, and some recipes too, including nitrate-free ham, bacon, and sausage if the recipes are worth sharing. 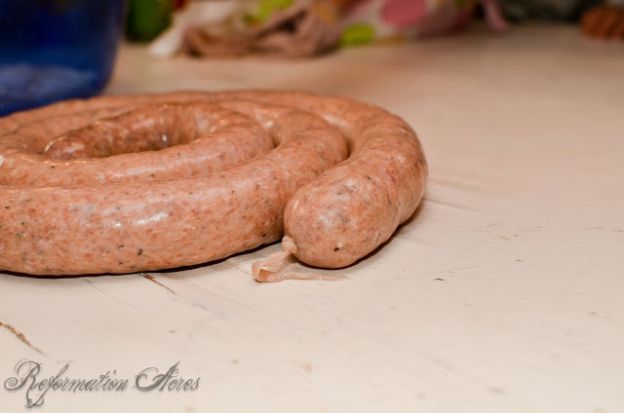