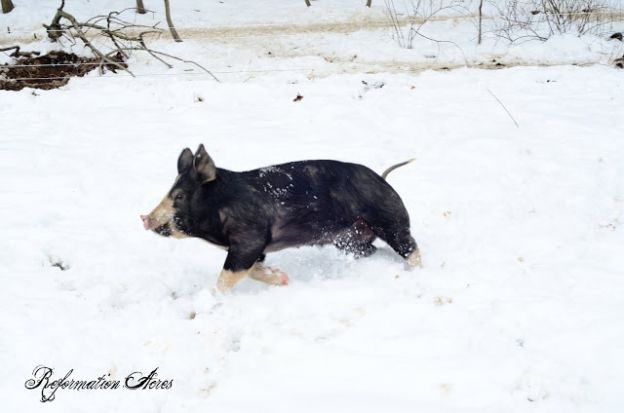 It’s never a good day when you’re trying to coordinate laying four children down for their nap at the same time and you finally have them settled enough to where you can read them a chapter from Charlotte’s Web and one says, “O shoot.”

It only took a moment after lifting them from the book for my eyes to settle upon the scene of a large black cow prancing in the driveway and on the road. The ensuing excitement was enough to ensure that I would be starting the naptime routine all over again once the cow was safely locked up back in the barn. Thankfully, Maybelle responds well to the familiar rattle of her grain bucket and Jared (14) and I were able to get her in without much fuss.

After the children were through hurling accusations and speculating motives (she was going after her calf), all rounded back up and in their places, I breathed a sigh of relief that things couldn’t go much worse for the day. 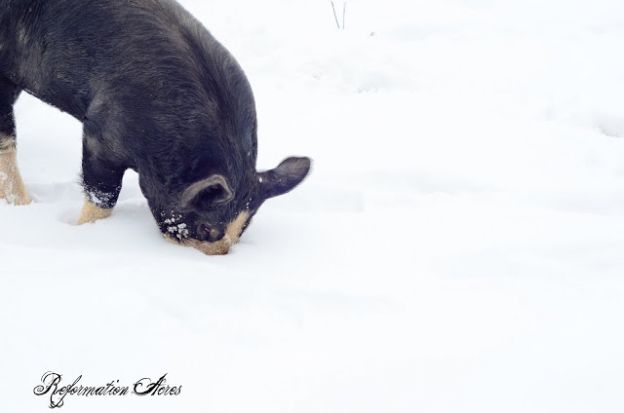 When naptime was over, I was moving about my bedroom and caught a glimpse of a dark mass contrasting off the brightness of the snow reflected in the mirror. Turning around and, sure enough, the four Berkshire hogs we are raising (our first pigs raised over winter) were exploring our pasture with their snouts to the ground.

With such limited (poor) pasture as we have, it is very important that they don’t do damage with those rototillers at the end of their faces. It never ceases to amaze me how quickly they can plow through, destroying everything they fancy to explore!! It seems to me that this breed is more prone to digging than breeds we’ve raised before.

But more importantly, one side of the pasture is secured only by polyrope. The same polyrope they clearly disregarded to put themselves in the position of freedom they were now in. 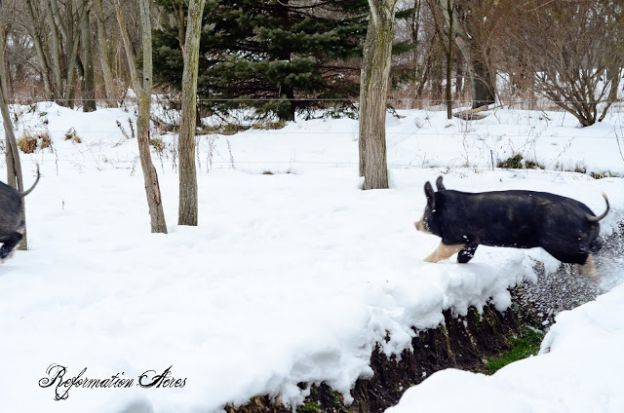 I tried to pretend like Jared could just round them up and get them back in himself. After all there was a foot of snow on the ground, the wind was blowing fiercely, and they are just as eager to come to a shaking bucket, but a few minutes later he was calling for help and I had to find my snow boots, mittens, and earmuffs and see if I could lend a hand.

Before heading out the door, I left Hannah (9) with a few do’s and do-not’s (stay off my computer, no chocolate chips, pay attention to the potty-training toddler who just woke up, and most importantly mind the baby, etc…) In my ignorance I thought I would be back in ten minutes. Little did I know that those hogs would keep us busy for another 4 hours, until dark, trying to get them secure enough that we could turn our backs on them.

While at first they were mildly interested in the corn, it was just enough interest to get them back behind the polyrope and try to assess why they were no longer satisfied with the ample room provided for them that they were so desperate to break through the shock of the wires.

They only stayed at the corn for a moment or two, there was plenty of vegetables left over from the morning slopping. They weren’t hungry.

It was frigid outside, their water was nearly frozen, but there was still a small hole clear for them to drink from. Not big enough a problem to cause desperation. 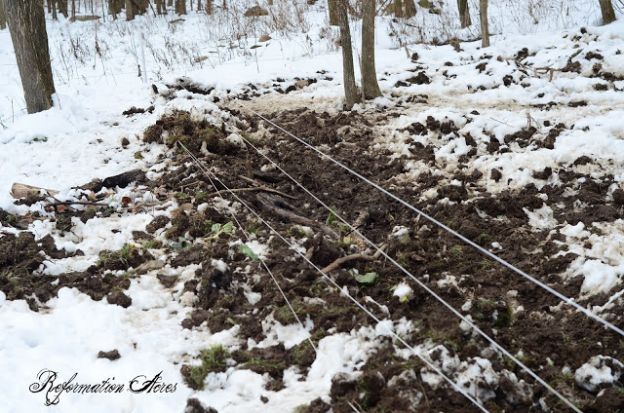 A check of the electric fence showed some issues, but the box in the barn was reading high enough to give the pigs a decent jolt if they touched it. Regardless, we improved the situation by fixing the bottom line where the snow had drifted over it and found a few clumps of dirt that the hogs had flipped up onto the rope and were frozen to it.

If I thought trying to control one or two pigs was difficult, four was a nightmare! I quickly learned that they could care less about the physical barricade I tried to make with my body. If they wanted by, they were going to go by! A switch was the solution and and a sharp whack was the only way to earn their respect for my “authority.” I wasn’t always quick though and when you lose one past you, the rest are determined to follow. A good thing when it’s the first hog back in, a bad thing when the first hog breaks out.

In and out, in and out. I can’t recall how many times over the course of those hours they pushed their way back through the lines, we put them back in, worked on finding the issues with the fence. I’ve lost count. Twice we even made it back up to the house, once I had five minutes to nurse the baby, before they crossed back though the lines. I worried, knowing that the more times they went through without feeling the shock, the more likely they were going to disrespect the fence in the future. But darkness finally fell and Jared had the fence to where it was generating sufficient charge that I decided I couldn’t worry about it any longer. Hopefully they would simply go to bed. 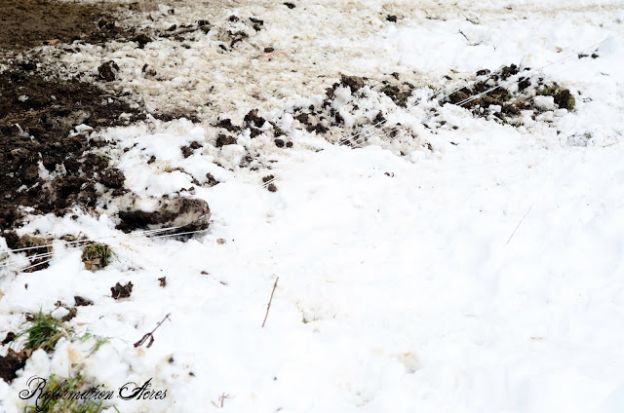 This scene has recurred a couple more times since. In fact, all photos from this post are from another day- thankfully my husband was home those two times, and hopefully will be if they decide they would appreciate a little more freedom than they have been given. Repairs and adjustments are continually being made to the fence to help it maintain despite the ice, snow, and mud.

And it wouldn’t be a homestead adventure worth having had if there weren’t a lesson or two to learn. I suppose the first lesson would be that perhaps polyrope isn’t the wisest choice for overwintering hogs where the winters can be harsh. Ice, heavy snowfalls, and drifts cause the pliable wires to lose their position and efficacy. I’m not sure that hog panels would do much better since we found them to be less than ideal at containing our hogs in past summers... But a more permanent fencing situation might be called for. 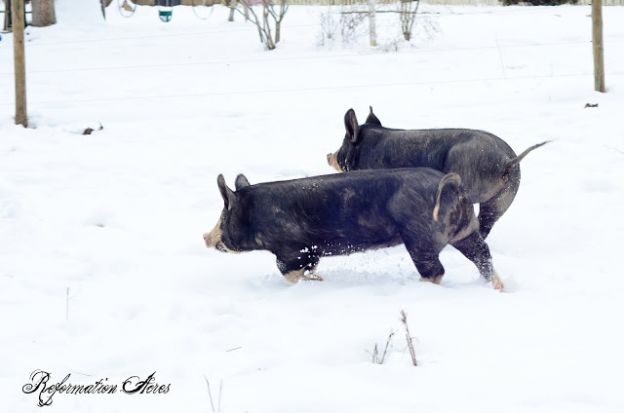 The second lesson I’ve learned is the value of my oldest children. There is no way that I could have made it through that day without either one of them. I simply would not have been able to get the hogs in by myself, let alone repaired the fence without Jared’s help. Likewise, I would have been useless to Jared had I been house-bound caring for the little ones instead of leaving them in the capable hands of Hannah. To have encountered this situation without either one of them and only a houseful of little children… I would have just had to hope the hogs found enough to entertain themselves in the pasture without trying to break through the polyroped side. And if we lived on a significantly larger piece of ground, I don’t know that I would have even left Hannah for that long…

This much I realize: We couldn’t raise large livestock without the help of my oldest children. And without them, I wouldn’t. Because when you are dealing with animals, there are unexpected’s, there are emergencies, we must expect that. Nothing ever goes to according to plan.