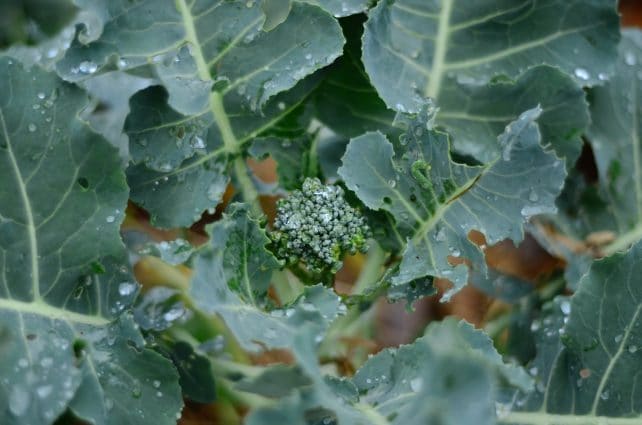 Well, it’s that time of year again.
The time when I get a cold shock of reality and look back at all the records I kept, determining the profitability (or lack thereof) of all the time and money invested into raising our own food.
As I look over the numbers and see where we’ve made losses and gains throughout the year, I have to bear in mind the true costs and profits of having a homestead.
Last year we set some goals to reduce costs and possibly improve yields. One was to reduce feed costs by 40%. Well, thanks to the drought THAT didn’t happen. We’re still paying an exorbitant for hay for starters. Add to that, we are paying more per pound for hog & chicken feed – but that’s a good thing really, because last year’s prices reflect industry standard feed and we were blessed this year to find a local source for GMO-free feed for our livestock. Feeding GMO-laden feed was never something I was comfortable with. I feel like it’s a giant science experiment and our animals are the lab rats (and ourselves a little further up the food chain), but that way is preferable to whatever is in the supermarket simply because of the improved quality of life I know our food has.
Other goals-
–Get produce cast-offs to supplement feeding. We have been doing this since late summer and while I don’t know if it is reducing our grain inputs (it’s mostly being fed to the hogs and those numbers are still out), it does give the livestock something to look forward to each day. We were able to get a few truckloads of pumpkins in November. In late fall we passed on the pomice from the cider mill since there was no logistical way for us to get it here and unload it. And daily, we collect 2 trash cans full of produce cast-offs from a local grocery store.
–Greater predator control. Obviously, any chickens the critters are eating, we’re not. So this was a big goal. Many coons and possums died as a result of this goal. We had less than a handful of losses due to predators this year. Sadly, that triumph is not reflected in our stats since a third of the flock was lost to a huddle (human error). And a couple dozen were lost because of getting held up in shipping over Easter. (Lesson: Do not purchase chicks from the feed store if Easter is early in the year. This year Chick Day is the first week of April and we are passing on them, shopping elsewhere.)
– Reduce the price per pound of our produce by 25-50%. A 45% reduction in the price per pound!! And that with having to battle all of those bugs and everything! I’m incredibly excited about this blessing.
Other notes:
– We did return to the wood chips deep litter method for the chicken coop this year and that fact is reflected in the cost.
– This year, we have had 6 heritage turkeys sharing the laying hens feed bill. Since, unlike broad-breasted turkeys, they still fit into the coop, we can’t force them to forage for 100% of their feed like we could the broad-breasted ones. There is no way of knowing who is getting what, but I’m sure that has had an impact on the feed bill. Since they’re eating with the layers all other turkey costs are included there, like poults.
-Technically, we didn’t raise hogs for 2012 butchering, so all costs incurred last year will be attributed to this year’s analysis.
– 2010 Total Yield was 2378 pounds; 2011 was 2482 pounds; 2012 was 2433 pounds. That’s an pretty even average I’d say of 2431 pounds per year. With all the variables each year- beef one year, a glut of zucchinis one year, none the next, no hogs this year, etc…. I count it a testimony to God’s provision from one year to the next. It’s like the ultimate CSA box- you just can’t be sure what you’re going to get. 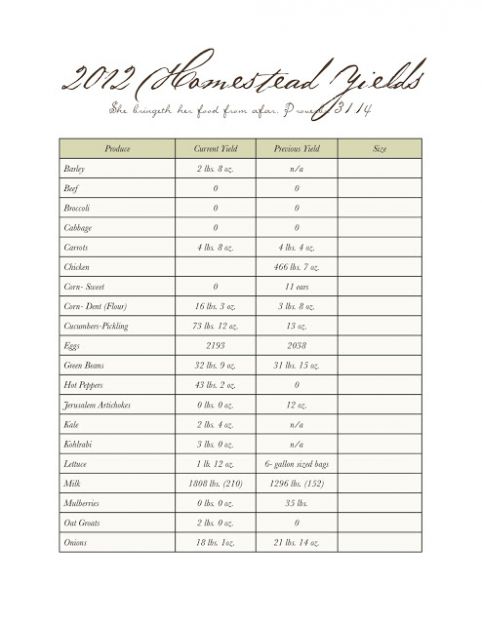 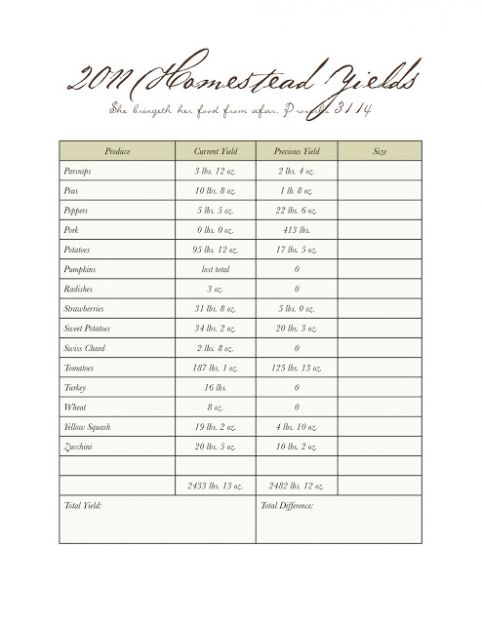 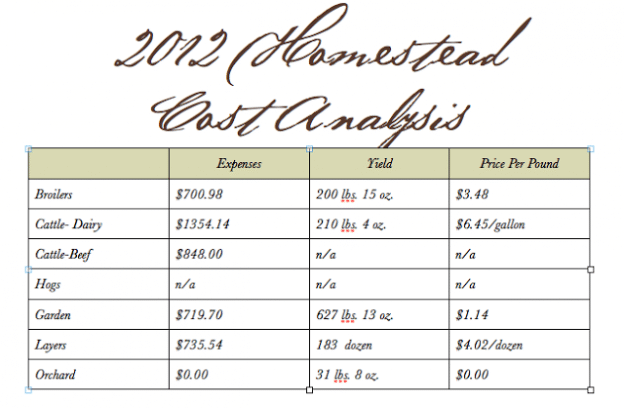 And for something new this year, I started to keep a target goal & inventory sheet for the pantry. It’s not a perfect record and I’m hoping to make improvements and additions this year. One thing I’d like to do is get a pressure canner and decrease our dependency on the freezer for things other than meat. Right now I have a large chest freezer (like the biggest you can buy, whatever that is) and 3 little cube ones. 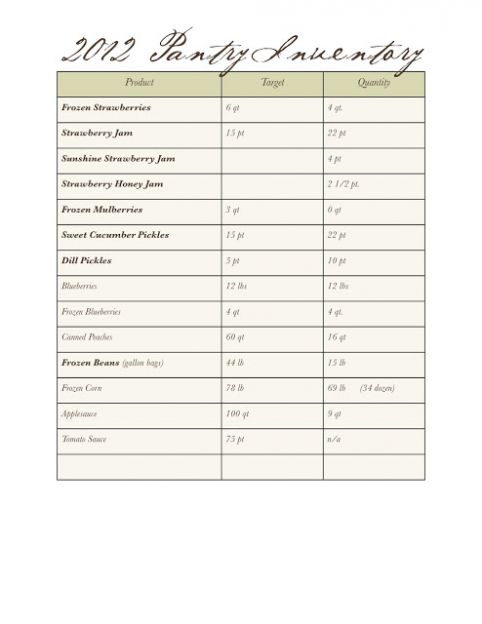 Hopefully, by sharing this others, can get a more realistic goal set for themselves this year. Obviously, we all hope to do better than this, but I think that by not setting standards too, too high discouragement will be reduced and others looking to getting into homesteading will stay the course and find themselves pursuing a new, satisfying way of life, learning new skills, and most importantly how to more fully rely upon the Lord who will provide!