I was looking through your blog archives and hoping to find something about how much land you have dedicated to what purpose. I love reading your blog in anticipation of getting our own 2 and a half acres soon! Do you happen to know if you have posted anything like that in the past, and if you have could you direct me to it?

I actually have never posted an aerial shot of our land and how we have laid it out. I shared a photo for the Homestead Tour with Homestead Revival, but since we have lived here for over 7 years and have made some major changes to the landscape in the last 4 or so and the photo I used pre-dated our possession of the property, we were excited to see this spring that Google finally updated so now we can see the impact all of this “reformation” has had on the land! 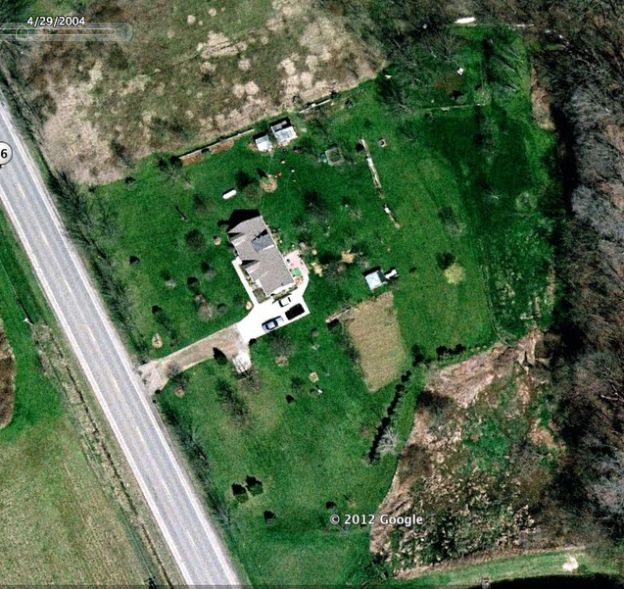 April 2004, A year before we purchased the land. 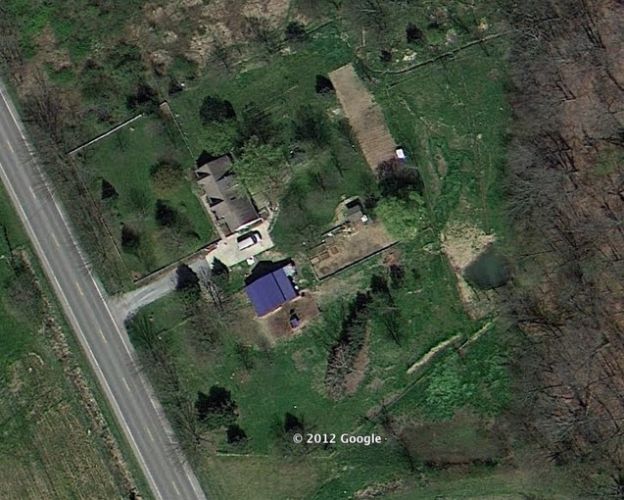 April, 2012: After four years of homesteading 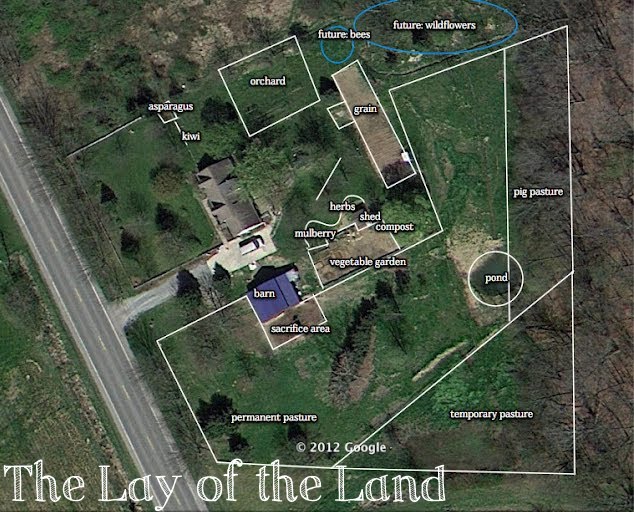 Notes:
The property boundaries are:
Top- The white fence along to the orchard;
Right- Pasture line;
Bottom- Pasture line;
Left- Road~The permanent pasture is about an acre and right now we have the a milk cow & her calf as well as last year’s steer on it. It’s nip and tuck. We won’t be raising a steer here again unless the pasture improves by leaps and bounds. I know they say a Dexter needs half an acre per head, but it’s not looking that way to us. Maybe it’s the drought in combination with our poor grass? I imagine that many small homesteads don’t have ideal grazing situations either, so I can only recommend 1 head per acre.  Four pigs will be going in the back next week. I don’t know if that will be enough to support them. We normally have two, but are raising two others for relatives. It’ll be tight.

~The temporary pasture area was too wet when we were putting up the permanent fencing to add it to the area. We’ve since put in the pond which as helped tremendously with gathering the rain run off that was collecting in the the temporary area.

~The installation of the pond last summer is the reason so much dirt is visible throughout the pasture. Sadly, that has really put a dent on our available pasture.

~The grain “field” will be our grain field no longer. I haven’t decide just what to do with it yet, but most likely will be a little less potager, a little more practical. In other words, this will be the area where I put the crops that will feed my family all winter, tomatoes, beans, sweet corn, peas, potatoes, sweet potatoes, because that little garden just isn’t cutting it.

~The small box just to the front of the grain “field” is growing potatoes this year.

~The diagonal line straight off the back of the house is the clothesline.

~The future bees are situated where they are, obviously to pollinate the orchard. In order to encourage all pollinators to the property, we’re hoping to clear out that back corner to plant naturalizing bulbs & wildflowers. Maybe the girls will quit scalping all my perennial beds that way too.

~We would also like to add rabbits at some point, but aren’t there yet so I haven’t studied up on a way to incorporate them into the scheme of things. I do know that I’d like for them to be on the ground eating grass rather than rabbit feed in order to reduce costs & improve nutrition.

~Ultimately, I would like to see the ducks moved to the orchard. They’re valuable for reducing many orchard pests. It’s just a shame to relocate them away from the pond and their instinct to swim, so I don’t know how we’ll end up facilitating that either. They need some sort of housing option though so we are able to gather the valuable eggs.