I am having trouble keeping on top of the manure situation. I have been doing loads of reading on the net to find solutions on a small holding with no tractor or machinery. We do have chickens and love the idea of sending them in after the cow has been moved to scratch up the cow pats, but the practicality of this seem overwhelming. I am living on 20 acres, part bush, part pasture in Australia in quite a dry part of the world. I would love to know how you deal with this issue at your place.

The short answer is: Poorly.

Thankfully, we don’t live in a dry area, although we are in the middle of the first drought I can remember for ages. I suppose I take for granted how well the rain does all the manure management for us.

What the rain doesn’t disperse, the chickens do.

The theory behind the practice is that the cows will do their business. The odor will attract flies which lay their eggs in the manure and the chickens will come behind in a few days, discover the larvae, and eat it, scratching through to make sure they get it all. The pile is scattered and the rest breaks down quickly.

That may work for some, but practicality aside, I’ve never seen a maggot in a single cow pie. And neither have my chickens.

What they do see is undigested grain. Yes, we feed our cow a little bit of grain. I know that’s quickly  becoming taboo. Everyone is looking for grass-fed dairy, but we have to consider the stewardship of our animal and try as we might, we cannot get Maybelle to supply us with excess milk above her calf’s needs and still maintain a decent body condition. Perhaps that’s because Dexter’s aren’t bred for that purpose, perhaps we don’t know what we’re doing. So she gets a scoop of grain at milking time much to the delight of the chicken’s. More often than not she hasn’t even finished going before they’re running up to scatter the piles in search of goodies. 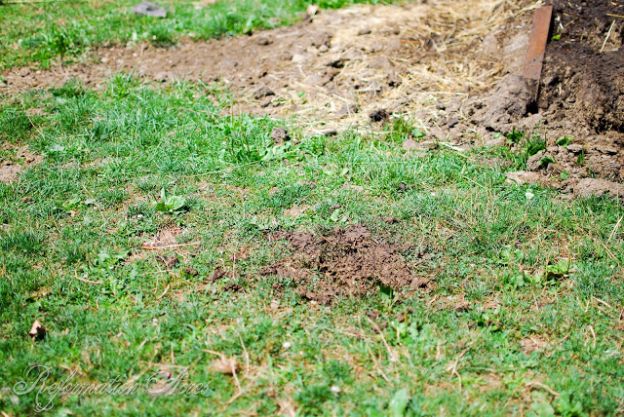 Center of the photo is a pile less than 24 hours old. 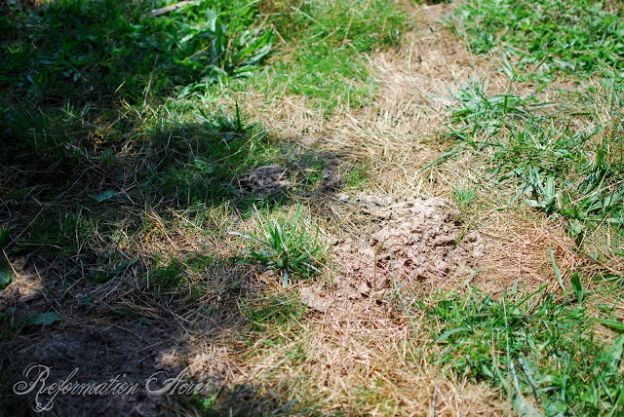 Here’s one the chickens missed. It’s hard as a brick and will take a long time to break down.

I imagine that in the absence of a paddock system where you move the cows today and the chickens tomorrow (or whenever), managing it would be more difficult. However, I do wonder if the chickens would become trained to learn to follow the cows knowing what the cattle have to offer. Chickens are surprisingly easy to train for food and our gals will come when called.

Of course, this only applies to the summer months. Because we are trying to improve our pasture and implement a paddock system (an abysmal failure this first year, by the way, compliments of the aforementioned drought), we chose to create a sacrifice pasture. Simply put, we sacrifice an area of the pasture for winter use where the grass will probably never grow. 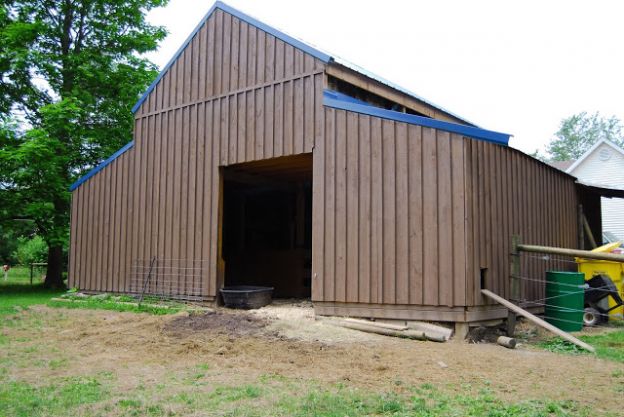 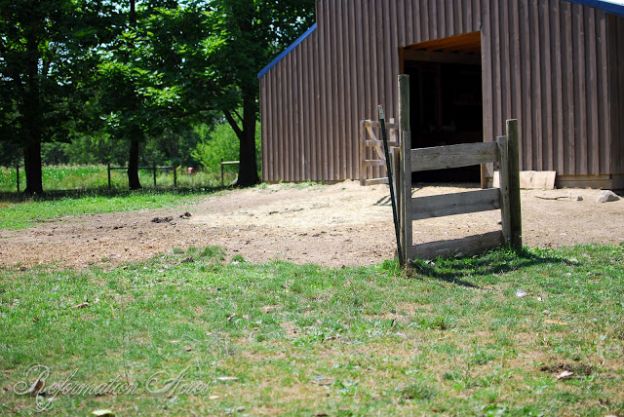 Sacrifice pasture after one winter’s use- 2012

We chose the area just outside the barn for convenience and because of the high traffic it was becoming damaged naturally. The area was simply sectioned off with polyrope and electrified. A gate was installed, which of course looks a little silly just sitting there unused in the summer. It makes for a nice turkey roost. You can visualize the rectangle that was used and then notice in the center left of the photo that there was some runoff outside of that area that piled up preventing grass from coming through this summer.

As you can imagine, with two cows going on that same area every day for six months, it was pretty deep by spring.  My husband borrowed my uncle’s tractor with a bucket for an afternoon and scooped it all into a pile right off the garden to let it compost.

I’ll bet you all have a question now!

And the answer is yes, it did stink. BUT only for a couple days and now I don’t smell it at all. Thankfully! Because otherwise, I don’t know what we would do! Whenever we clean out the chicken coop (quarterly), we add it to the pile as well to let the chicken manure and wood shavings break down. 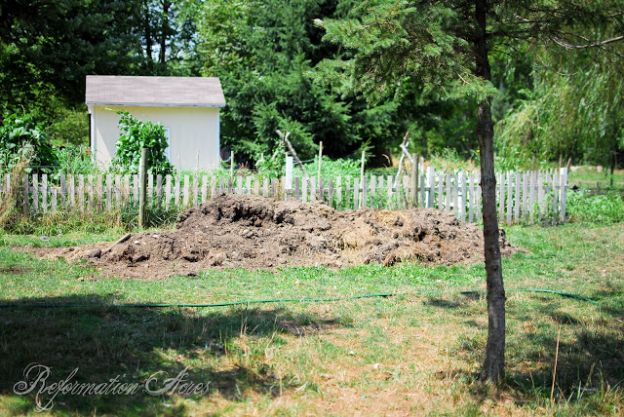 What the chickens leave behind in the pasture is of little concern to us. It breaks down very quickly. At least quickly enough for us not to worry about how to take care of it. When they get out of the pasture and start wandering the yard it’s a totally different story. Somehow the laws of time and nature become suspended and it takes an excruciatingly long time for those little splats to disappear which of course increases the likelihood that a very small shoe will step in it and walk it straight into the house and start jumping on my bed. Now you know why I’ve become anal (pun intended 😀 ) about keeping them in the pasture this summer.

Which brings us to the pigs.

Pigs are easy for us. Instead of penning them up and creating issues of filth and accumulation, we’ve sacrificed another area of the pasture- along the back, underneath the shade of the trees- and we rotate them through there. I don’t delude myself into labeling them pastured pork in the end because it doesn’t take them very long to turn the pasture area into nothing more than an open air pen. But with an open air pen comes the benefits of rain washing away the manure and blowing the odor away on the breeze. We’ve never noticed a problem with odor until the last 4-6 weeks when they’re large and it’s hot outside. I don’t know how that will change now that they’ll be finishing up in the winter months. Anyway, a few weeks after slaughter there is little (fecal) evidence they were even there. When it rains heavily, it will puddle in a wallow and take on a funny rusty color.

So that’s how we deal with the wonderful messes our animals give back to us which bless us by fertilizing the pasture and making compost for the gardens.

Sadly, I wasn’t really able to address the true issue in the question which is how can this be done without the aid of the chickens or in dry regions. If you had any advice to share I know she, and perhaps others, would really appreciate benefiting from your wisdom.