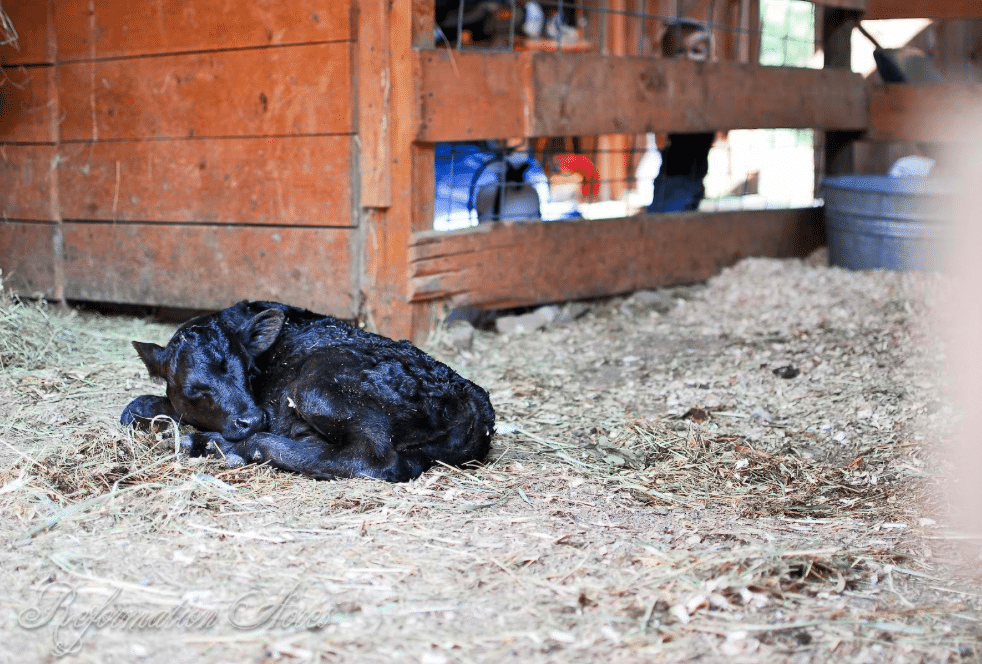 Our homestead grew a little last night with the addition of an adorable, sweet, little Dexter calf!

Besides this announcement, I’m sharing all of the various things we’ve noticed the last few days leading up to the birth as well as a video for the benefit of other homesteaders like us who pretty much have no idea what they’re doing or what to look for either. I’m certain that Maybelle has calved at least three times, but it could possibly be four now. By the time we were certain she was in labor, it was all said and done in about two hours- an easy window to miss if you’re not carefully watching.

Maybelle was due to calf this coming Sunday and remembering that she gave birth a few days before her due date last year, we’ve been eagle-eying her backside for days now. I’m hoping with this information as a reference, we might be able to relax a little more the week leading up to her due date next year. (Who am I kidding? Can anyone relax while waiting for a baby?!)

One of the things that we remember seeing the night before Gus was born was that the space between her tail head and pin bone was significantly wider. At the time, it was a “Huh.” moment, but now we knew that was a sign of impending labor and now were monitoring that area carefully. The problem  this time was it seemed that the pin bone started to drop away days beforehand and any increasing of the space was so subtle that it as hard to discern. 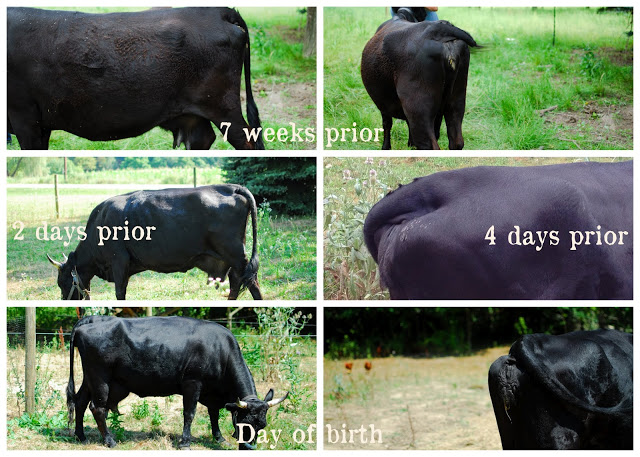 However, we were pretty suspicious that labor was beginning yesterday morning. She was laying down in the shade most of the day, was seemingly pacing when she was up, walking with an disjointed gait- pausing for a minute before continuing to pace, and had a small string of clear discharge hanging from her backside mid-afternoon. When we fed the chickens in the back pasture, she was pretty adamant about wanting to be back there and so we left her to her own will.

Around 7 pm, we were dining outside and still watching her closely. Were her teats a little more swollen? Were her ribs sticking out? Did she look like a slinky dog? It was obvious she was breathing heavily when making the pauses in her rounds- contractions?

ast year, after noticing those changes in her body, she calved about 10 hours later, so the kids, not wanting to miss it again, were planning their camping excursion for the night.

During dishes, Jared noticed from the kitchen window that something large was hanging out of Maybelle’s backside… maybe we would get a calf sooner rather than later!

Hurrying through evening chores and baths, getting Maybelle hay & water, we all gathered out back, just after visible feet were reported, about an hour & a half later (9:00).

Quickly darkness fell upon us, yet not wanting to miss this opportunity for the children to see their first live birth by such a small window, Bill drove his truck up to the pasture to shine some light over it, affording the opportunity to get a some poor video as well.

Half an hour after dark (9:30), you could barely discern the two white spots of the hooves against her dark body. I was under the impression that cows laid down to birth, so I was thinking we had a while to go yet since she was still standing, but instead that calf slid right out within a minute or two!

She cared for the calf, mooing softly, and licking vigorously, encouraging the baby to stand and nurse. Thankfully, the calf was eager to nurse and did so before the first hour was up. Such a relief to us after the myriad of problems Gus caused last year when he waited almost 24 hours before nursing!

Not to say this wasn’t going to be a trouble free situation… We strongly suspect that a coyote has been visiting our homestead and dining on various poultry, most recently our last duck. She was taken from the very same back pasture, through the electric fence, and torn to pieces in the woods, right down to the last egg in her body.

Not something we were wanting to happen with the calf.

The first plan made was that Bill & Jared would take shifts overnight, but after the first one, they managed to get mama & baby up to the relative safety of the barn so the boys could sleep worry-free.

This morning, I woke at 6 am to the disappointing news that the calf was a bull. It was too dark to tell last night, even with the aid of the lights and no one was in such a rush to know that we would disturb them by prodding. We had really wanted a heifer. I was disappointed only for a moment last night that the calf was black, but clung to the hope of a heifer. The plan is to milk two Dexters each for six months out of the year to keep us well supplied with milk year round. A bull calf meant that dream would be at least 3 more years away.

My consolation was that we would try AI this fall, perhaps with a different dual purpose heritage breed better known for their milking traits.

But an hour later, Bill came in and reported that he was actually a she. Dim dawn light, foggy sleepless brains, the power of suggestion (Jared insisted it was a bull), and a small patch of white hairs between her legs had led him to believe she was a he. Once there was more light available, the truth was pretty obvious. Naturally, the true gender wasn’t discovered until after I had revealed it was a bull on Reformation Acres Facebook page. Can’t have you thinking we know what we’re doing here, can we?

So we’re happy. It’s a heifer, hopefully a good one, maybe not quite as feisty as her mother. We’ve learned a lot from this experience, were able to watch our first live birth, and are optimistic that things will go better than last time. We’re also armed with the knowledge that it seems pretty obvious that Gus’ castration did not go as planned. I’m fairly certain he wouldn’t have mounted her otherwise. Closer inspection has shown things are looking a little bulgy down there in his nether regions. A mixed blessing as we need to have another cow in here to read Maybelle’s behavior to see when she’s in heat. We will be able to tell when to have her serviced, but need to be vigilant to keep Gus away from her then.

I can’t tell you how much I’m looking forward to that first tall glass of cold, sweet, creamy milk!!