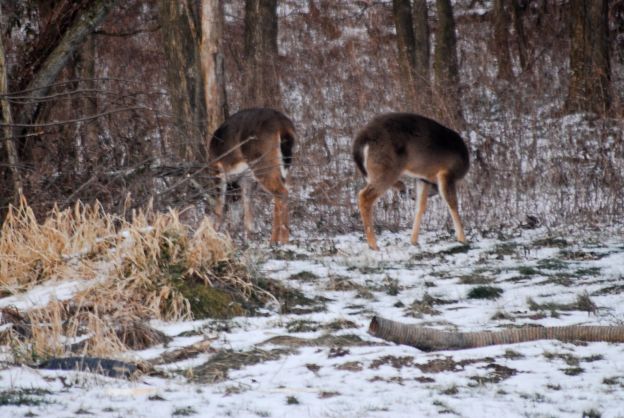 Hunting season has come to a close for our home and this year, it was my oldest son, Jared, who was provider for our family bringing down his first deer, a doe, during the youth gun season.

It’s a welcome addition to our freezer and will do it’s part to supplement the remainder of the beef in the freezer from last December helping to stretch the meat until next December when we have plans to butcher our steer calf.

I bit into my first piece of venison a few years ago after having heard horror stories about how terrible it tasted. Never having had game before, I was afraid of gamey meat. I was pleasantly surprised. It wasn’t too bad at all, in fact, I rather enjoyed it. I could especially justify substituting it for beef in my diet considering how lean venison is. We were given a second deer that same year. This time the Lord plopped one down in our ditch and we were able to salvage most of it and although I was eating roadkill (I just watched the last ounce of respect you had for me get swept away in a blustery winter breeze… and now it’s gone), it was even better than the first! When my husband killed his second deer the following year, my growing fondness for the meat waned. I learned all about gamey and I must confess that it sat in the freezer for an entire year until it was disposed of to make room for this year’s kill.

I’ve spent a lot of time trying to figure out why those first two deer were so excellent and the third, so awful. I had some odd notion that it had to do with the method in which the deer was taken and that a deer taken in archery was superior to that taken during gun season as that was the only appreciable difference that I could discern. Age wasn’t a factor since my husband has a proclivity to harvest “button-bucks.” (Or as we like to tease him, Bambi.) I speculated that perhaps there was typically more blood getting in the meat when the deer was shot with a gun as the nasty one was. While searching for recipes to expand our miniscule collection of venison recipes, I came across some interesting information that was found while I was scrolling through an Amazon preview for the LL Bean Game and Fish Cookbook.

If the weather is consistently cold to cool (ideal temperature range is 36-40 degrees) one can age the deer still in the skin in a shed, barn, or even an outdoor garage. How long to hang a deer to break down the muscle cells (and thus both tenderize the meat and improve flavor) depends entirely on the individual animal. For a buck that is prime and fat- one with his kidneys encased in solid lumps of white suet, with the entrails webbed with a veil of fat- the process takes no longer than a week including the time the deer hung in the woods. But if the deer is shot after the rut, or if for other reasons it is lean and fatless, three weeks is not too long. However hanging a deer that long should be done under controlled conditions; locker plants or butchers will sometimes hang a whole deer in the skin for you. Don’t get the notion that a young buck provides tender meat superior to a mature buster-of-a-buck. A fat old-timer in prime condition is just as tender and tastes much better than the “veal” of young “eaten’ deer.” The same goes for any old “dry” doe.

If you go bag a huge old buck that has run off most of its fat during the rut, and thus have to hang him two or three weeks to age the meat, don’t be dismayed if a fuzz of mold forms inside the body cavity. This can be scraped off, just as one scrapes the mold of a well-aged smoked ham; the meat underneath will be sweet and tasty.

Aging Game Meat in the Freezer

Many deer, especially whitetails, are killed in areas close to the hunter’s home on hunts that begin with a predawn  trip by car to the cover and end by a hike back to the car or truck after the last drive. Deer killed on such hunts do not have to be hung at all; if such deer are skinned, cut up, and the meat packaged for the freezer immediately after the deer has been brought home, they “age” beautifully right in your deep freeze!<

Immediate (basically same day) freezing (is) found to break down the cells and age the meat as a perfect substitute for several days of hanging.

This book also finally answered my mystery as to why venison taken early in the season has such a delicate flavor as opposed to the strong gamey flavor if you wait until gun season, which is post-rut. Turns out that, once again, the fat is where the flavor is. I should have known.

Fat meat with some marbling in the tissue tends to be tenderer than the meat from a thin, slab-sided animal, and for this reason the meat from an old and active buck, say an old Roman-nosed ten-pointer, may be tougher than the meat from a fork horn. However this is not true if the old trophy-head is fat. Sometimes late in or after the rut, an active, mature buck may have lost his fat during the “running” period when he eats little and chases much, but some late rut bucks are still fat, especially if it’s been a good beechnut year. An old dry doe will also be fat and tender. But marinating will tenderize meat tending to be tough, especially if the hog-dressed animal has hung with the skin on for a week in a cold-to-cool, airy place to allow the tissue to break down. All big game is tough if it is eaten just after it has cooled out, but then so is beef. Such meat eaten even three or four days later will usually be quite tender.

But one should not get the notion that old animals must be tough. On the contrary, old bucks when they are hog fat before the rut may be tender as well as delicious. Young bucks and dry does, that is, does that have had no fawns that season, will be both fat and tender well into the fall.

And may prove to be quite a hint when it comes to the mystery of cutting and preparing the well-aged venison for the table.