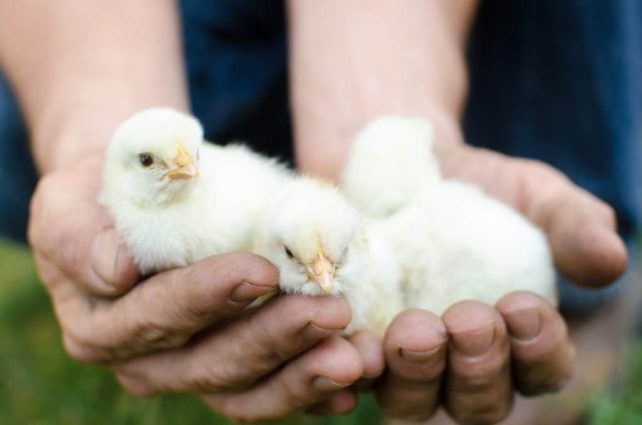 As you may know, we decided to raise two batches of meat chickens this year in order to avoid becoming overwhelmed on butchering day.

Riding the wave of buzz-word frenzy, our first batch were the Freedom Rangers. They were purchased from the local farm and garden center on chick day at a great price and then raised in a brooder for 3 weeks before setting them to pasture utilizing a system similar to the popular chicken tractor one… just without the confining wire. We moved their shelter every day or two and fed them once a day in front of the shelter. They ranged out a bit, but not too terribly much, choosing to forage on and among the grass near the shelter. The furthest they ever wandered from their “home” was on their way out to meet us with the feed bucket. There were some pros and cons to the breed and our predator losses were more than we ever expected while they were in the confines of an electrically fenced pasture complete with predator wire and deer netting. When it came time to sample the meat, it more than exceeded our expectations of what we thought a pasture- ranged (re: exercised) chicken would be.

With our second batch of chickens we were trying to determine how much more quickly we could raise a group of Cornish meat birds- the ones you’ll most commonly find in modern agriculture and your local grocery store.

We found a company instate with cheap chicks available the same week that boasted of their meaty breasts full of texture and flavor. Their variety are called White Mountain broilers and were supposed to be ready at 7 weeks. We wanted to raise them in nearly identical circumstances as the Freedom Rangers with the only difference being the availability of foraging materials from early to late summer and also that they would be in the front part of our pasture instead of the back so that the poor quality pasture could benefit from some of the chicken manure they would leave behind.

While my personal opinion is that raising the Cornish breed this way makes for a far less disgusting bird than in a state of semi-confinement, we ran into multiple problems this time around that tarnished my experience with the breed once again. 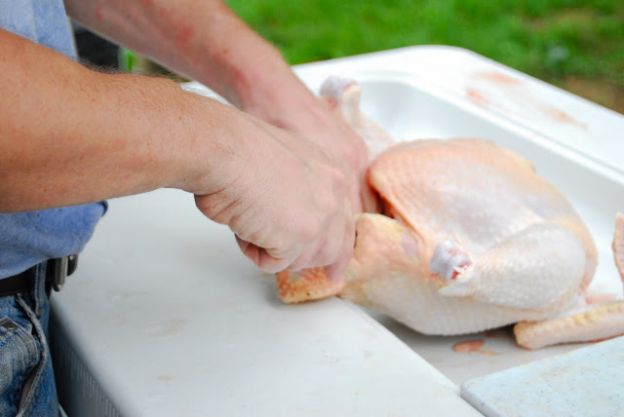 1.)  They Don’t Pasture Well- These birds quickly learned what it meant to see people and rather than learning to forage near home, they ended up camping near the barn door… if not in the barn, or under the near-by line of pine trees. Ultimately, because they were not using their shelter out in the pasture, and we didn’t want them taking up residence all night in the barn with the accompanying mess and smell, we caved and brought the shelter up near the barn and gated the barn doorway but then they just slept outside the gate. All this high traffic near the barn combined with the wet year we’ve been having served to completely trash a significant portion of our measly pasture as evidenced in this video.

2.) Leg Issues- This was taken days prior to butchering and you can see for the most part that the birds have strong legs despite their laziness and are much more mobile and functioning than those raised in a chicken tractor would be. That’s not to say that we weren’t without leg problems. Because of their proximity to the barn and extreme stupidity (when it came to anything other than food), more than one bird fell victim to being trampled by the cows at the cost of their legs and eventually their lives. We noticed at butchering time several infected feet or legs & feet swollen to a mutant-like size.

3.) Predators– Speaking of lives, we started this batch with 75 chicks and on butchering day 46 were remaining to participate!! Staggering losses… more so than with the Freedom Rangers. Between being stepped on by cows and carried off by predators this pasture ranging system leaves a lot to be desired. Thankfully, with enough fly-bait, we were able to dispatch of I think 3 raccoons and an opossum and the disappearances subsided. Regardless of what type of chicken we raise next year, this system is going to either need some major tweaking or we’ll have to return to the warm & cozy comfort of a confinement system such as a chicken tractor.

4.) Cannibalization– Other observations while raising the Cornish was that they cannibalized easily taking out two of the three turkey chicks hatched here this summer as well as their wounded comrades.

Benefits of Raising the Cornish Cross

1.) Easier Butchering- At butchering time, the internal organs dislodged from the cavity more easily. For those of you hand-plucking your birds, these birds had overall few feathers to pull than the Freedom Rangers.

2.) Faster-Growing– While they didn’t reach full-size as quickly as stated, they were ready before the Freedom Rangers. We butchered at 12 weeks, postponed due to illness and weather, but they would probably have been ready and at a more manageable size at 10-11 weeks of age.

3.) Maturity– The Freedom Rangers began showing signs of s-xual maturity somewhere around 9-10 weeks of age complete with crowing and aggression (towards each other). I watched carefully, but detected nothing of the sort from the Cornish. This may or may not be an issue for you one way or the other, but personally, we kind of liked the farm-yard sounds of the roosters crowing 🙂

4.) Less Expensive to Raise- How about some statistics?  Of course you want to know how much they cost to raise, how much feed they consumed, and how many pounds of meat we harvested!

465 pounds of chicken with the goal being 286 pounds per year. Not bad!

But with the Cornish begin $.71 cheaper per pound to raise, they are definitely the more economical choice. I know I said on Facebook that unless they ended up tasting like chocolate or dressing out at 9 1/2 pounds, I was sold on the Freedom Rangers, but money talks.

And speaking of taste… we did a Freedom Ranger/Cornish Roast-Off with side-by-side roasting of comparatively similar sized birds and I can report that there were some definitive results you won’t want to miss!

« Biscuit Topped Chicken Pot Pie
How to Roast a Chicken »