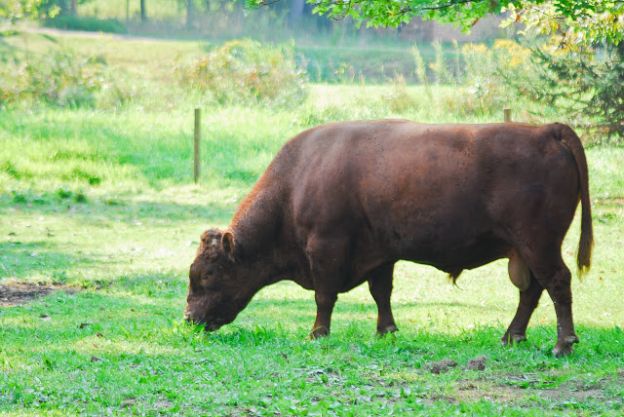 We’ve only been enjoying milk for just a couple months now and it’s hard to believe that it’s time to start planning for next year’s season! But it is and we’re very thankful that we were able to avoid the expense and guess-work of AI and can once again breed Maybelle au-naturale. And I for one am doubly thankful that this year it will come without the worries of having to butcher the bull we use. Though our freezer won’t be restocked, we won’t have to deal with the upfront expense of purchasing the beast. 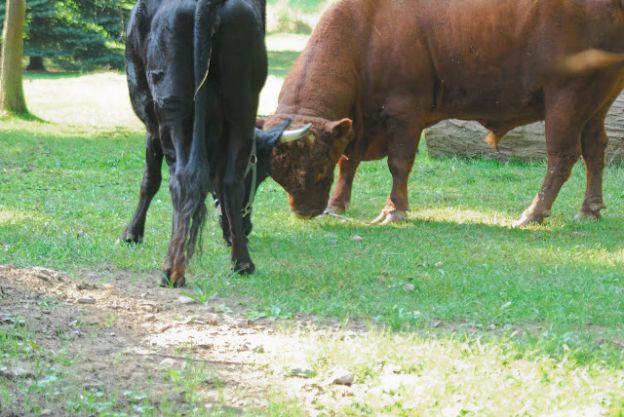 The introduction went fairly well- better in fact than last year’s which surprised me for two reasons. First, Maybelle and Caesar were from the same herd and were reacquainted after only about a week. Secondly, I didn’t know how he would respond the the calf, but he could have cared less about Gus’ presence.

He’s been an extremely friendly bull so far… even allowing for my husband (who is the only one bold enough so far to attempt it) to give him a scratch. That makes me an extremely nervous momma… because I know that the friendly bulls can be the most dangerous ones.

It’s odd seeing him polled and he looks goofy to me because of it and I wish his legs weren’t quite so short and hope that trait isn’t passed on. Especially if next year’s calf is a heifer so she won’t be too hard to milk. Otherwise, I don’t know what to make of his physique- if he’s a good bull for breeding or not. I tried to find what we should be looking for on the internet to no avail. 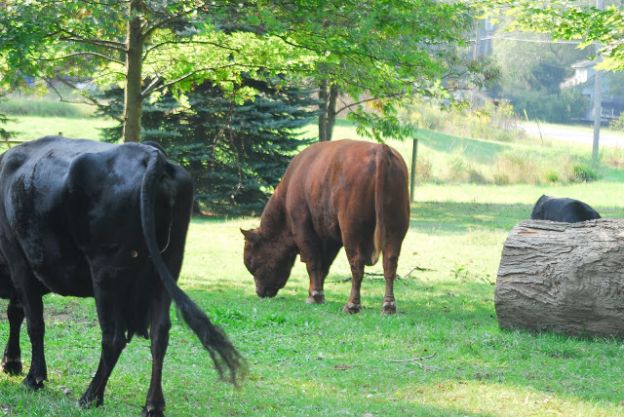 Since we don’t have any other cattle to observe Maybelle’s behavior with during her heat cycles, we were hoping that we would be able to detect it by watching for drops in her milk production. We did see that for four days (exactly 18 days ago today) and with the average cycle being 18-23 days, had hoped that he was coming just in time. While we did observe some bloody mucus the last two days, the interactions between the bull (whom I shall simply call Red) & Maybelle would in no way indicate he has any interest in her whatsoever. Last year, she had two heat cycles before settling and she and Caesar put on a show that became downright frightening during milking times because he was NOT at all pleased about being so far from his girl.

Maybe someone with more experience can weigh in here…. Would the 18 day space between the production drop and now the mucus be enough of an indicator that she might be in heat? Or should I trust the (lack of) interaction as more of a sign that she’s not? 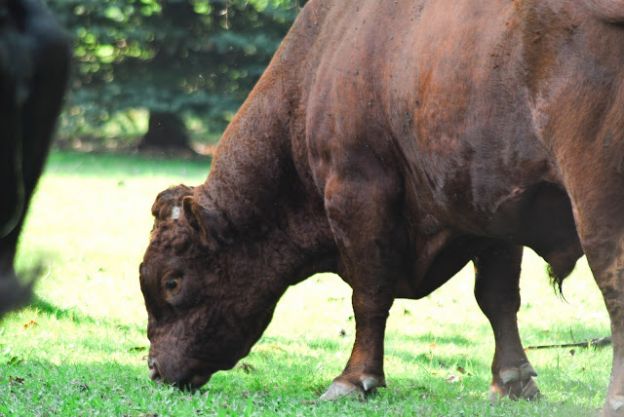 Several times during our interactions with “Red’s” owner, he mentioned that “Red” is the progeny of a particular sought after bull and I decided to do some searching about him on the internet and was introduced to the controversial world of Dexter breeding. Apparently there are several bulls with questionable heritage who may not be pure-blooded Dexter. In the case of Red, he has in his heritage a cow that was born polled to two horned parents- either a genetic mutation or she was the product of cross breeding.

All this made me look into the pedigrees of Maybelle and Caesar and it was interesting at any rate to see just how often these few questionable bulls have been used in the American Dexter breeding program.

For instance,
~Maybelle shares with Red that questionable bull in her heritage (although further back)
~Maybelle & Caesar shared a different popular bull in their blood
~So much so that ‘Gus has that popular bull in his pedigree 30 times!
~Caesar and Red actually have the exact same breeding pair on their pedigree once 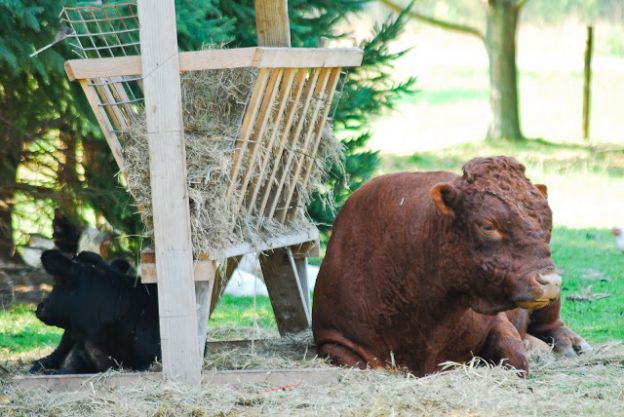 Anyway, since Maybelle isn’t pure-blooded and we’re not getting rid of her, it’s no use worrying too much about breed preservation and purity of her line. I’m glad though that we decided not to leave ‘Gus intact and sell him as a bull for breeding. Any future decisions about that are a whole lot easier now and our little bull calves will be banded as a first step to the freezer from here on out.

But, hopefully, that won’t be an issue next year.

Because, hopefully,  we’ll have a little heifer to raise as another family dairy cow.

And, hopefully, she’ll be red too.