Sadly I didn’t make out to the garden but once during the month of August with my camera in hand. I thought of it often, but with a procrastinating attitude until I realized that August was nearly over and I needed a photo for my monthly update!

August was a lousy month for the garden. The loss of several crops left vast expanses of open space for opportunistic weeds to take advantage of my altogether lethargic management of, well, everything.

This year I was determined not to lose the cabbage and broccoli to cabbageworms and as a preventative measure had covered those raised beds with row covering. There were times when it became unsecure and openings afforded the moths a chance to lay their eggs, but I didn’t think that the situation was as bad as it turned out to be. I thought that I had been picking them off and during a stretch when the covering remained secure for the duration, I didn’t see the need to check. Big mistake. When I finally did decide to take a peek, I found the tell-tale signs of stalks stripped of all leaves and mounds of droppings scattered in the crooks of the branches. So, once again, the brassicas have been a total loss. I do believe that the broccoli harvest at least would have been disappointing anyway. I don’t know if it’s because I’m trying heirloom seed, but at this point, it’s not worth the wasted space to grow a plant that will produce what amounts to one little floret. I just don’t care for broccoli that much anyway. At any rate, I might try a hybrid variety next year before I throw in that towel. (Unless of course you can suggest an heirloom variety that produces well. I’m not asking for grocery store sized heads, but bigger than a ping pong ball might be nice.)

I finally surrendered to the leaf footed stink bug like beetles and ironically, haven’t lost another plant. The 3 remaining zucchini plants are a sad sight and the stems at the base are mutilated which makes me wonder if there isn’t a squash borer vine at work as well. However that was where the beetles gravitated towards to do their damage so perhaps not. Thankfully, there have been stray zucchini coming in with the harvest baskets. Just enough to find a new favorite muffin. Of the four I planted, there is one yellow squash remaining and despite the beetles onslaught, the winter squash seemed amazingly resistent and managed to grow and flourish until my children trampled it on the way to harvest tomatoes for me.

The corn succumbed to a merciless attack of wicked raccoons. After night after night of attempting to trap them only to have them foil the trap and take the bait, I decided to harvest what was left- all 11 ears. I cleaned out the entire corn patch. All except for one lonly little stalk with one immature, untouched little ear of corn. And that one little ear of corn was gone the next morning. With the sweet corn gone, the rascals quickly discorvered the other patch of dent corn and were making quick work of it every night until the fly bait mixed with Coca Cola seemed more enticing to them and caused the demise of 3 raccoons and an opposum. Since then the corn and the meat chickens have been safe. (Except for the one the cow, Maybelle, stepped on it’s head.)

Once again, our potatoes did poorly, pulling in about 4-5 spuds per plant for a grand total in the neighborhood of 20 pounds. At least I won’t have to buy potatoes for two months or explore my storage options since I’m confident they’ll keep that long.

On a brighter note, the tomatoes are doing wonderfully despite the fact that the trellising system collapsed under their weight and the plants were a bit damaged by that. Since sprinkling with epsom salts, their has been no further occurence of blossom end rot. I’ve harvested over 100 pounds. I’m so thankful not to be a slave to their ripening and have filled gallon bag after gallon bag of ready-to-process fruit and tossed them in the freezer to process at my leisure. I’ve also been delighted to watch a couple of Roma tomato plants spring up amidst the green beans and even produce some green and even one red fruit so far! I never would have imagined that tomatoes could grow from seed to fruit in zone 5. Of course, here we are in September with just the first of the fruit ripening and this week at least is cold and wet- not good tomato weather. My final tomato note is that I have definitely found an heirloom favorite! Last year, I tried Purple Pruden’s and found them to be just not sweet enough for my taste in addition to the most horrible cracking. This year, the grower where I was compelled to purchase from was carrying Brandywine’s and they have much less cracking, a more expected and traditional (normal) tomato flavor and are nice and meaty. 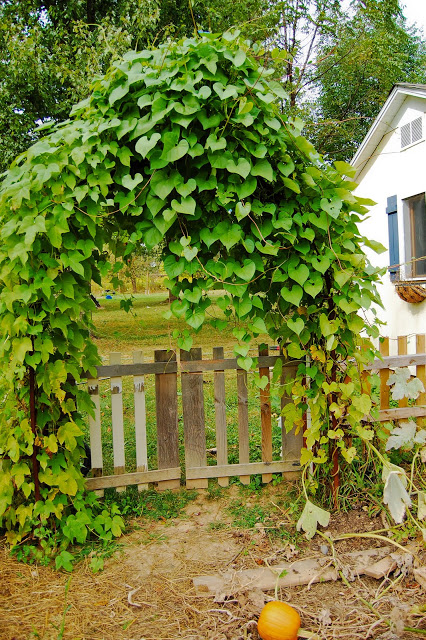 Over in the second garden, the last week of August marked the 80-90 day mark for the Georgia Jet sweet potatoes making it time to harvest them. I believe that the cracked mammoths we grew last year were a result of assuming them a fall harvest crop and leaving them in the ground for an additional month or so. We experienced much less cracking this year, but it wasn’t entirely eliminated. Despite harvesting a month earlier than last year, we still brought in about 7 pounds more than last year. Very exciting! They just finished curing and will spend the next two months in the basement sweetening up.

Counted among the harvest I suppose could be the iceberg lettuce seed I removed from the bolted plants. I don’t want to grow it in the same beds again next year otherwise I would have simply shaken the seeds from the pods onto the ground. As it is, they’re poorly cleaned with lots of plant debris, but once I get a bed cleaned up here this week, I’ll scatter it haphazardly anyway and have lettuce ready and waiting for me next spring.

This month I expect (hope) to really pull in a decent green bean harvest before it begins to frost. While the bush beans have been giving us enough for a meal here and there, the pole beans have been slow to mature. Very slow. I believe I normally begin harvesting beans sometime late June/early July! I pulled 2 pounds off during a first harvest last week and then another 5 pounds today with the promise of many more flowers and baby beanlettes hanging from the vine. We’re growing FM1 Blue Lake and all agree that the flavor and texture are exceptional! Much less bean-y and stringy than the Kentucky beans I’ve tried the last two years. I guess I’ll choose to see selecting these couple of heirloom varities this year as progress amdist all of the other setbacks.

Is your garden still producing or is your land at rest waiting for the 2012 growing season?