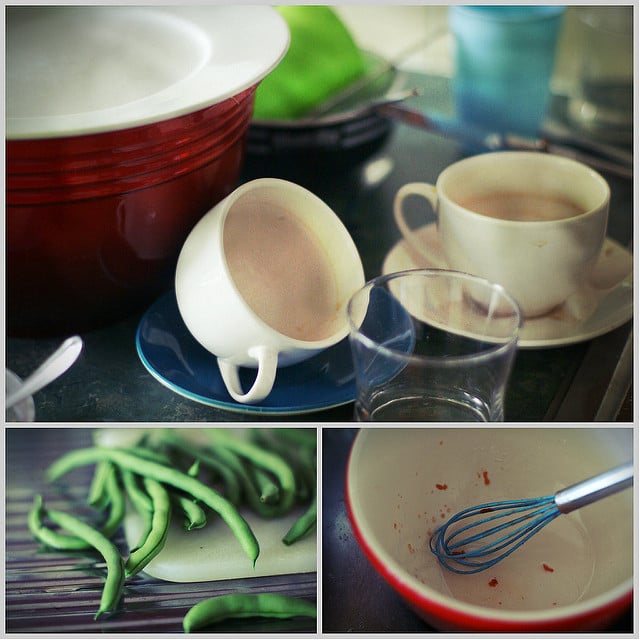 Credit
I have been training my children to do the dish washing for about 6 years. One would think that by now, they would be able to perform the task without much guidance or assistance, but next to math, dish duty has been the plague of my motherhood journey.

The dishes are usually poorly done. Nothing is rinsed well, the dishwasher is poorly loaded, no one can remember if it was run so clean dishes are often run through again if I wasn’t paying the closest of attention. Counter tops littered with not just crumbs, but often large chunks of debris. And the floors? The broom blazes a path down the main areas and everything else is left behind.

To top it all off, it’s usually a 2 hour!! job for it to be left in this condition! You’d think it would sparkle after working for that long! It really boggled my mind when it would take that long when we brought home fast food. Explain that one to me!

I was so discouraged! Remember, I have been training for 6 years! And let’s be honest, doing dishes is something that the least skilled of people can do well. I must confess that when I should have been patiently going over it again and again, I would postpone the problem until the next meal and assign dish duty to the offender as a punishment. Clearly, I reasoned, they needed practice! 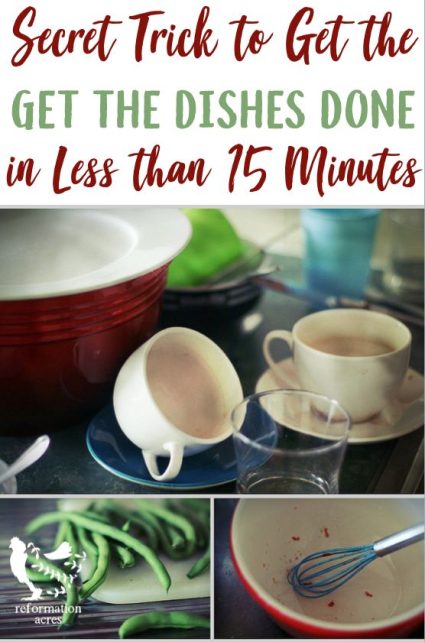 The whole messy (literally!) situation came to a head over the last few months. There were days when the kitchen was nasty enough that I couldn’t bring myself to even think about meals and we were scrambling to get dinner together every night. It dawned on me what my meal preparation hold up was and I knew that something had to be done. It was affecting us on so many levels, but I couldn’t think of what I could do to really improve the situation.

We started by eliminating the dishwasher. I know that seems counterproductive on the surface, but because it wasn’t being loaded properly, food was just getting crusted on. It was like hiding all of the dishes away to wash tomorrow.

It’s always much easier to clean food from dishes immediately following the meal. As I already mentioned, the dishwasher was often being run multiple times at the expense of energy, expensive dishwasher detergent, and wear and tear on the appliance. (Thankfully, we have well water.) By not using the dishwasher, we are eliminating the expense (and it is quite spendy!) as well as catching the dirty dishes much sooner.

The second step was to commit to doing lunch dishes myself- no matter what. No longer would I use the rollover punishment. This meant that at least every 24 hours the kitchen would be squeaky clean. It also meant that it would be clean for dinner preparation and we would all get to eat well and do it before bedtime!

It was during one of those afternoon dishwashings that I stumbled upon the ultimate solution to my dishwashing nightmare.

I often incorporate our composer study into our lunch hour simply by playing pieces while we eat. One day while listening to Tchaikovsky, the 1812 Overture came on. I was in the middle of doing the dishes at that point and it was peppy and I was really enjoying it when I decided to see if I could get done before it finished. As I worked it came to the spectacular finish when cannons are blasting and the music is fast paced, I found myself picking up speed… it was going to be over soon.

I wrapped up the dishes just as the song did and with it did my dishwashing dilemma came to an end.

I talked with my husband and got him on board. (Now that he’s seen the fruit of it, he believes it a clever plan.) We assigned the various dishwashing duties to every member of our family and at the close of our meal each evening, the 1812 Overture commences. Everyone scurries about to get their part done and they have become so familiar with the piece that they know how many minutes they have left at the various changes in the music.

Our dishes are done in 15 minutes every night freeing our evening up.
Our kitchen is clean and, as a result, I don’t mind being in it.
Or eating anything that comes out of it.
Our family is learning to work together as a team.
Our children are being educated, really familiarizing themselves with a composer and the nuances of his work. Plus have you ever heard a 4-year-old say, “Tchaikovsky”? It’s precious.
We’re saving money.

We’re adapting this method for each composer that we study simply by finding a work of theirs that is 15 minutes or so long.

Using the composers from the Simply Charlotte Mason Music Study Module, here are some selections that fit that time frame.

I’ve played “Beat The Clock” before, but by far this is my favorite twist on the game!