We seriously have a lot of milk around here! Even with a Dexter who brings in a third of what your average family cow produces, we’re averaging about 14 gallons a week! Needless to say, I’ve got milk on the brain. So from my brain to my blog, you get to read all about what I’m doing with all of that milk.

Let’s start at the very beginning, a very good place to start ;)At the cow. Today, I’ll be sharing the equipment we use and our routine for hand milking our family cow.

When it’s time to milk Maybelle, we’ve developed a routine to get the milk from her to the freezer as quickly as possible. The faster it’s all said and done, the less chance there is of bad bacteria taking over. And that makes me happy.

We’ve converted an entire cabinet in the kitchen, formerly a pantry of sorts, to milking supplies. Outdoor things are kept in a plastic box attached to the stanchion.

1- 4 gallon stainless steel pail
2- 2 gallon stainless steel pails
1- 2 gallon plastic pail
Betadine
Iodine Teat Dip
stainless steel wide mouth canning funnel
filters- We’ve tried 4 types so far: coffee filters (WAY too slow); muslin (too slow); sheer fabric triple folded (VERY fast, maybe a little too fast); and t-shirts cut into about 6 X 6 square. T-shirts are my favorite. Fast, but not too fast. The milk makes it to the freezer in a reasonable amount of time, but it isn’t pouring through so fast that I wonder if anything else is making its’ way into the milk.
rubber band
half-gallon wide mouth mason jars with rings and lids

Before going outside to milk, it’s really nice to have everything arranged for after milking. The mason jars with rings and lids are set on the counter and the funnel is outfitted with the filter  by rubber banding it to the outside of the bottom.On the warmest of days, the 4 gallon pail is filled with as much ice as our ice maker contains then put one of the two gallon pails inside of the icy pail. Now that the weather is more fallish, we’re skipping that step.

The other two gallon pail is filled about halfway with warm water. This water is for washing the udders.

A pail in each hand, it’s time to head to the barn.

The warm water is transfered to the plastic pail that is left in the barn for the purpose of washing. 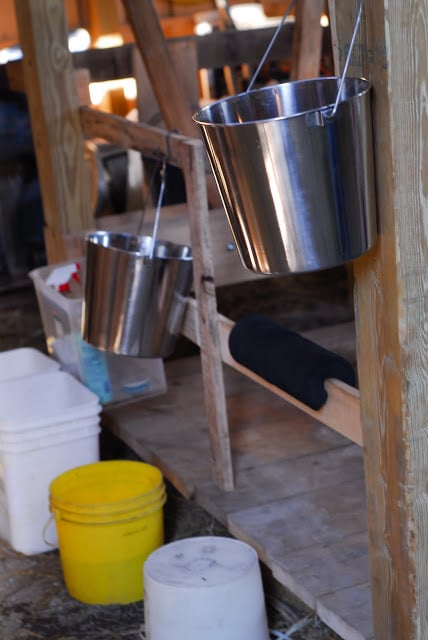 One steel pail is hung on the stanchion high, the other low. 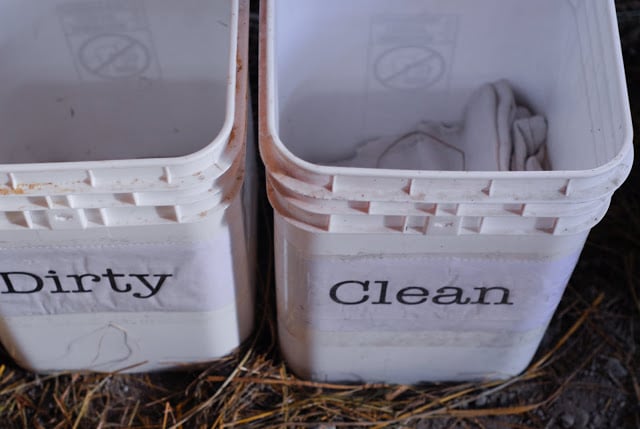 To wash the udders, a rag is taken from the Clean bucket and her udder is rinsed with the warm water. Betadine is squirted into the rag, lathered up, washed, rinsed, and then dried with a different clean rag. Both rags go into the Dirty bucket. Finally, the first few squirts from each teat are emptied into the dirty water. They are very laden with bacteria. The soiled water is saved to wash the stanchion when we’re done or if she happens to release the contents of her bladder (which, thankfully, has only happened twice in a month). 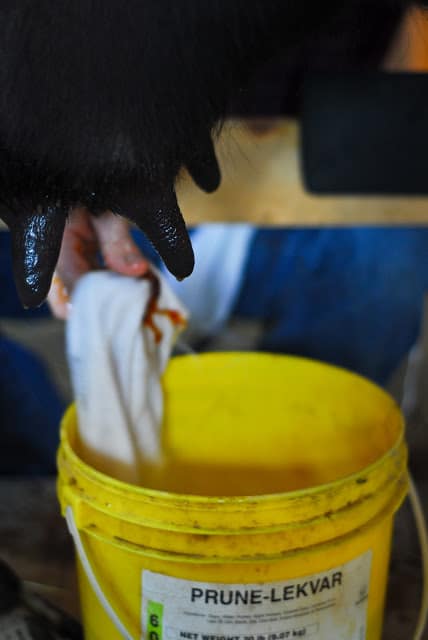 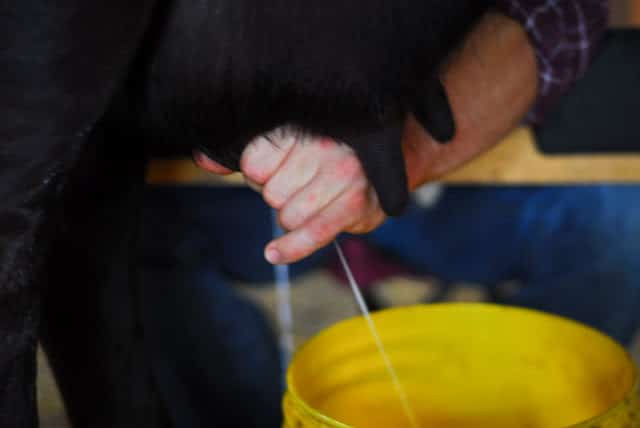 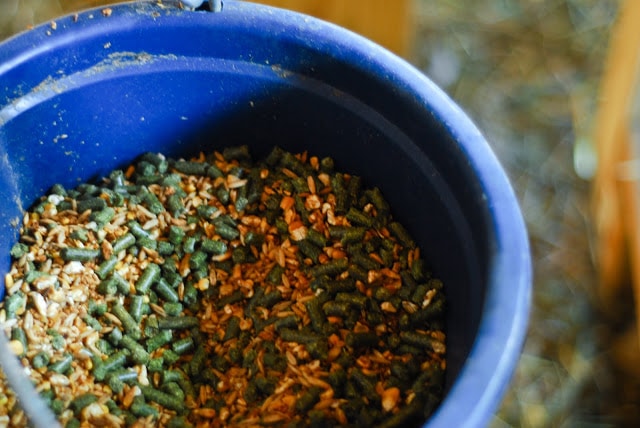 Next, working together as a team one on each side, the cow is milked out in about 15 minutes or so while she munches on sweet feed from a pail in front of her. We didn’t want her to have any grain, but apparently you can’t teach an old cow new tricks. That’s what they used to give her during milking and she kicked and fussed until we caved. 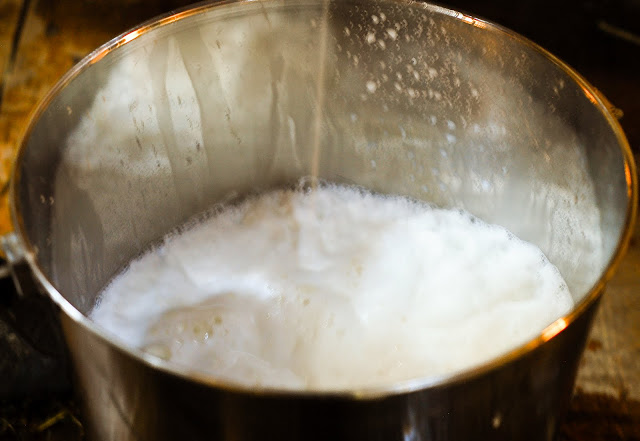 As we milk, the milk is periodically emptied into the high bucket, maybe once or twice depending on how antsy she is. That way if she kicks the bucket- literally, not figuratively- we don’t lose the whole amount. 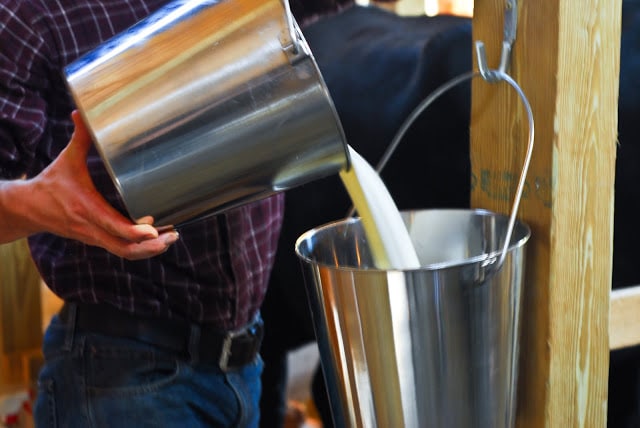 When we’re done, her teats are sprayed with the teat dip stored in a windex bottle. She’s put back in the pasture while the milk goes inside for straining. 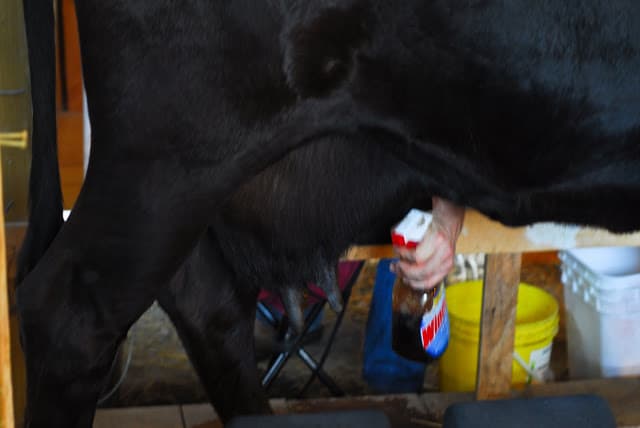 The funnel (with cloth & band) is placed inside the canning jar and then the milk poured through. Finished jars are  lidded  and placed in the freezer. A timer is set for an hour after which time, they’ll be transferred to the refrigerator. I like the timer to be of the sort that continuously alarms until it is shut off. Use one that signals and then is done, and you’re liable to have frozen milk on your hands. 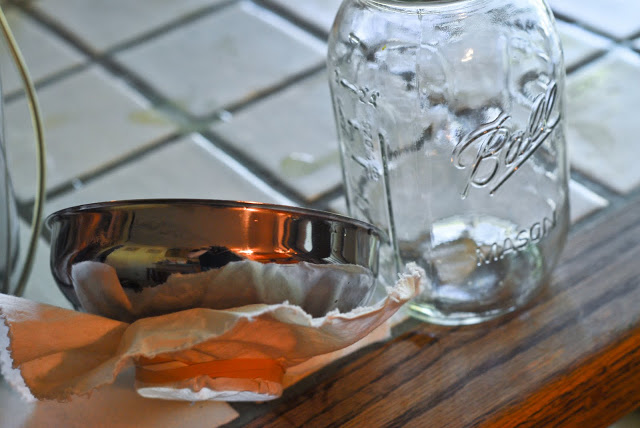 It wasn’t long before we realized we needed a system to indicate the age of the milk in the refrigerator. I probably would have had this planned out had not Maybelle’s lactation status been a surprise. In my next dairy post,  I’ll discuss how we keep it all straight.I’d hated to have not worked something out- I’m sure that one day we would have gotten quite the surprise in the form of spoiled milk.

Once the milk is in the freezer with the timer set and the labeling and recording is complete, the pails and funnel are washed with anti-bacterial dishsoap. It’s very methodical as well – not using a dishcloth because we don’t want to introduce anything nasty plus you can feel for cleanliness better without a cloth barrier. Inside, outside, bottom, and then to air dry.