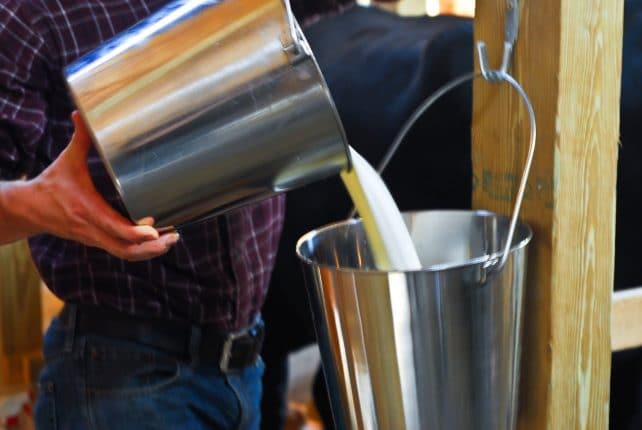 Working our way from the cow to the table, we quickly realized that we needed to find a way to keep all of the milk in the refrigerator straight. We didn’t want to end up always drinking the freshest milk first while leaving the older milk to spoil and giving us an unpleasant surprise!Since we have quite a few little children who can not read, we thought it would be the most beneficial to have a color coded system. Every day of the week has it’s own color (or two colors for the since Staples only had five colors). 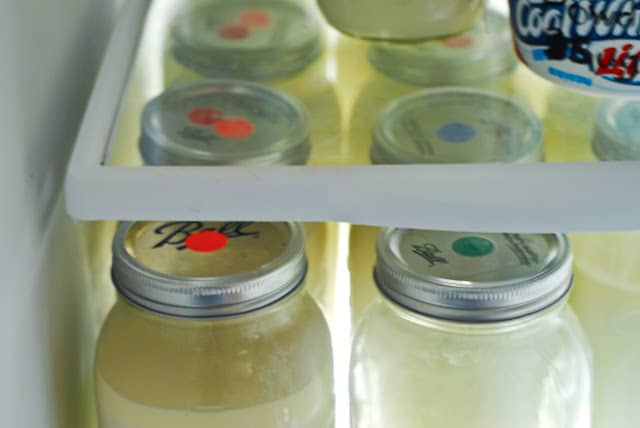 The system is easy. Just drink milk from the jar with the color from the earliest day in the week you can find. The color label is a circular sticker placed on the lid and sealed with a small piece of shipping tape to make it a bit more waterproof so it will last longer.

The daily totals of milk are recorded on a monthly chart based on a four week system on the refrigerator. The day of the week is colored as a reminder. Daily totals are tabulated at the end of the week and end of the month and recorded on a separate yearly chart. I took this picture a couple weeks ago and we just finished this chart. We got over 61 gallons of milk in September!!! (A third of which went down the drain in botched mozzarella recipes.) I also measure in gallons instead of pounds like I should. I would forever be trying to calculate and convert it into the gallons that I can understand. 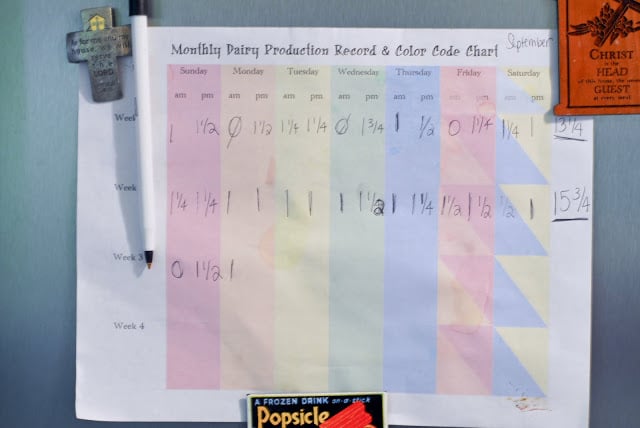 I also quickly discovered that all dairy products kind of look alike lined up there in the refrigerator. (And the only way to tell them apart from the lard is to look for the smears stuck to the side of the lard jar.) So I’ve labeled everything non-milk, covering the paper with shipping tape again so I don’t have to do it every week. Things like buttermilk, yogurt, cream, and butter (even though I won’t be making butter- there isn’t enough cream to support us anyway and the first time I tried with two quarts of cream which was a week’s worth, it took me THREE HOURS of shaking the jars to get it all to turn. I couldn’t move my arms the next day, let alone help with the milking! I’ve read that you can make butter with a Kitchen Aid stand mixer so I’ll be trying again if I get one.) I have a day set aside in my homemaking binder schedule to prepare each item and if there is anything leftover, I pitch it, wash the jars, and reuse them. 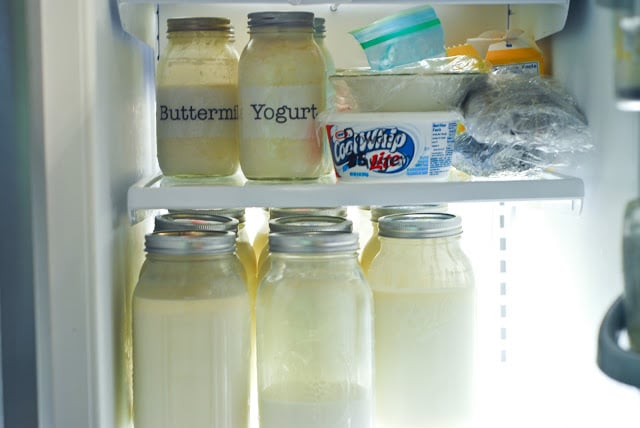 Hopefully, I didn’t bore you all to death! Next week, I’ll move on to the good stuff- recipes!!
« ~From The Cow To The Table~
~September’s Garden~ »