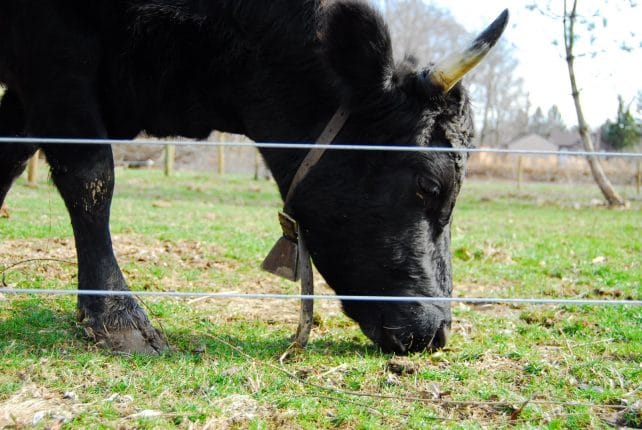 The “new thing” I learned this month was how to milk a cow.
And care for the cow before and after milking; how to handle the milk; that raw milk is really delicious- and no, I’m not just saying that! I honestly expected to make some huge transition in order to force myself to get used to it since I cannot stand store-bought whole milk. The boys have been trying to get me to drink whole milk all year, saying that I need to make the adjustment sometime. But I figured I would just make one big leap and I’m sure glad I did because it tastes much like skim milk only fresher and a bit sweeter. There is no sour under current to the flavor.
I also learned that you can’t make raw milk yogurt without cooking it and killing the bacteria in the milk otherwise the bacteria in the yogurt can’t culture, there’s too much competition; that it takes a LOT of milk to make a little butter; real buttermilk doesn’t taste the same as from the store – if it’s not soured, there’s no tang; how bulls aren’t as frightening on someone else’s property as they are on yours; and most recently: signs of cows in heat (maybe last night!!).
I feel like we’re “Google farmers” and I’m thankful for the wealth of knowledge out there shared by other folks who have done this.
Well, I’ve learned to milk the cow and have determined to help at least a bit once a day so that it can become second nature to me and that in a pinch, if my husband happens to need to meet with someone for dinner or leave early to get to a long distance meeting (just a handful of times a year), I feel capable enough to handle the task and he can trust me enough to leave it in my hands. This wasn’t part of the deal when he bought a cow, but I can see how my compromising in this aspect could potentially be beneficial.
We took this video and had a real difficult time with it. As it turns out, little people have been playing with the video camera taping their baby sister laughing at them on numerous occasions. When they hear me coming there’s always a mad scramble to throw the camera back into the basket where I keep such things. Sometimes they forget to turn it off leaving me with either a dead battery or, in this case, a full SD card. There was about 3 seconds of footage prior to going dead. As a result, I milked while my husband tried to erase tons of 10 second clips. I never knew when he was taping or just deleting as he held it. I’m just glad that he got the precious time as my girls showed off their newly acquired milking skills. I love when they learn new things alongside of me!
At the end, you’ll notice both my husband and I milking the cow. It’s standard practice to milk a cow from the right, so of course Maybelle would only let us touch her on the left. Figures. After a few days though she submitted to being milked from the right as well so she’s being worked from both sides allowing the milk to be chilled even quicker!
« ~Caesar~
Pickled Eggs »