New to the barnyard this week is a Dexter heifer whom we’ve named Maybelle after my daddy’s first cow when he was a boy!

It was looking as though we weren’t going to be getting a cow this year as we had hoped. We definitely had decided that a Dexter was the breed of choice since they work very well with little acreage and eat less feed more efficiently. They are also a dual purpose breed meaning they make both a great dairy and beef cow. We’re more interested in a dairy cow and read that they give two gallons of milk a day which is much more reasonable for a family than the 6 gallons a Jersey will give or more if you’re looking for a Guernsey (Oh how I wish we had enough land for a Guernsey… not only are they beautiful, but I would love to get A2 milk. Godliness with contentment is great gain. We’ll be having this girl tested once she’s settled in.)

Anyway, most folks around here are raising their Dexters for beef which means that during breeding they pay little attention to the qualities one would want in a milk cow. After much searching and networking, we found a fellow who had many heifers expecting this year and every one of them had a bull! Even though we would have to wait years before there could be any milk, we looked on the bright side… at least she would be trained  having raised her from a calf, but we had surrendered ourselves to waiting until next year.

I wondered if the Lord was planning to send a cow our way since he had given us the opportunity to get 300 bales of hay for free- a years supply- and then to even give us access to an indefinite supply of free hay since the farmer who had been harvesting it doesn’t want to do it anymore. He’ll even replant it with alfalfa for us this fall at no cost! What a tremendous blessing! She is literally going to cost nothing to feed! (Except for treats.) I kept looking at the barn, stacked and packed like a can of sardines, just full of hay and wondered if they would be used for more than a million nesting possibilities for the hens and hiding places for mice.

Then my husband was flipping through the classified ads and found someone selling their entire herd including their beloved milk cow who has put out 4 gallons of milk a day! Double what we expected! She’s five years old, loves people more than other cows, loves to be scratched around her horns, comes when called, and she even came with a classic little bell around her neck!

But best of all, there is a possibility that she has already been bred and we could be getting milk as early as March or April!!!!  (We were told she was expecting, paid for her, and when we picked her up were told it actually hasn’t been vet confirmed yet. But we would have bought her anyway. We have a guy who will breed her for free!) We do hope that she was bred however, because the bull was on the premises and he was a spectacular well-tempered beast! 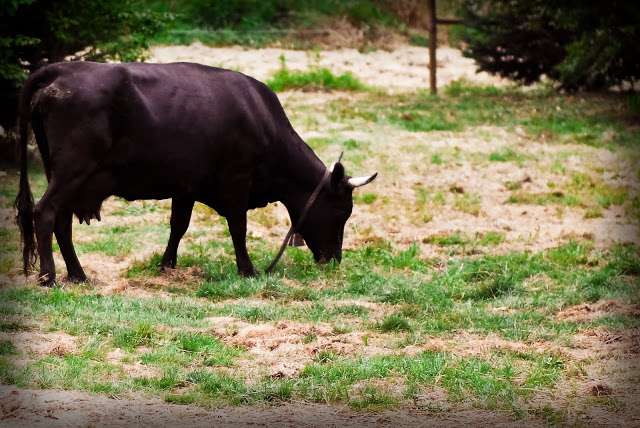 Regardless, we’re all terribly excited about being cow owners. There are giggles and grins every time we hear her “moo” out there and the best part is we get to keep her!   Now all we have to do is enjoy her and wait until the spring when we’ll hopefully join the ranks of proud raw milk consumers!

Well that was the post I wrote up on Saturday to post today. A lot has happened since then.

Yesterday morning we woke and began to prepare for worship services and reports came trickling in that Maybelle wasn’t looking quite the same as she did the prior day. She didn’t sound the same, that’s for sure. She was pacing the fence line nearest the house, calling to us frequently. I was asked to go confirm the suspicions that her udder was looking fuller that it had when we brought her home.

I though it did as well.

But we were totally unprepared for this!! We thought we had until April to buy equipment and learn proper procedures, etc… There is so much to do around here why worry about it now needlessly when we have all long, boring winter to devote ourselves to study.

The first thing we did was assess the situation. Sure we had been told she wasn’t producing. Or had we? What the lady told us was that she was selling her herd because she was newly employed and didn’t have time to milk her or care for them. When my husband tried to inspect her, he was told that she was empty. I guess she wasn’t specific and we made assumptions. We decided that if she was pregnant, that she wouldn’t have to be dried up until January or February. Why let all of the months of milking go to waste.

The first step was to head to TSC to get a halter, lead, and treats to try to get her secure and interested in something other that what was going on near her backside. But she’s didn’t fall off the turnip truck yesterday and wasn’t going to have any of my husband’s nonsense. She tried kicking him every time he got too near.

Our next move was to call in reinforcements. My husband’s friend has a bit more (ok MUCH more) experience in farm matters and was kind enough to come when we called for help. He gave so much advice and help and even gave a crash course in milking since we were right, she was full!

We wonder if the calf she had this spring wasn’t fully weaned and that’s why she’s still producing? One of her teats it badly damaged, probably from the calf again and is pretty sensitive.

Anyway, the day was spent planning and building a stanchion before 5pm so that we could get her on a 5-5 schedule. Another run to TSC was made. This time for a stainless steel pail, betadine, & iodine.

We can’t find a strainer locally and are going to rig something from my new canning funnel (double thanks Bekki!!) and some fabric strips from the bolt of muslin I have in the basement for making the girls nightgowns. (All a strainer does anyway is hold a coffee-filter like paper in place at the cost of $60 plus filters.)

All told, we probably got 2 gallons of milk yesterday!! Which is pretty exciting considering that’s what we thought we would get during peak.

I may never be able to update this blog again because of Maybelle. We’ll see. The deal with this whole cow thing was that I would do the inside work of turning her milk into milk products and the boys would do the outside work… like the actual milking. I’ve even had witnesses to this arrangement. However, it would seem that after one day, I’m being called in for backup/relief since “someone’s” hands don’t seem to be up to the task. I’m starting to wish that I didn’t have a bread machine. I’m betting my hands would be a lot stronger if I hadn’t been letting it do all my kneading for me for the last year. So I may never be able to type again. Au revoir!