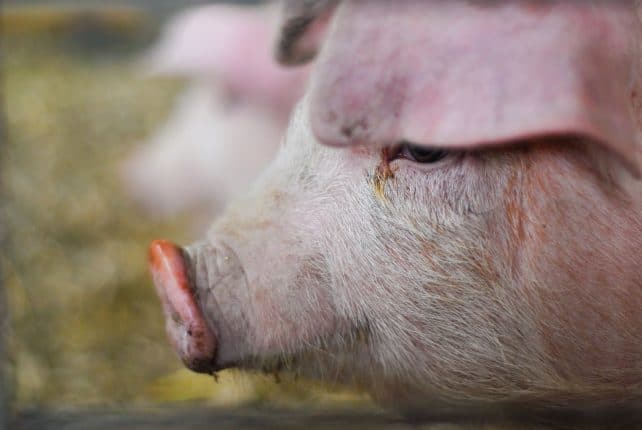 I knew it was coming and yet when this morning dawned I still found myself a bit melancholy as I thought about how it was our last day with these hogs. This year’s pigs were entertaining in an entirely different way than last year’s hog. She kept us on edge constantly wondering when she would escape next, while these girls provided us with hours of enjoyment, especially since we moved them to the pasture.
I’ll miss watching them hop around when they get hosed down. Big Pig, would even open her mouth and try to catch the stream like a dog.
I’ll miss watching her talk to my husband when he gets up in her face. She’d open wide her mouth and snuffley snort back at him.
I’ll miss walking out vegetable scraps and watching them come running when I call. I could watch pigs run all day. It’s a real hoot.
I’ll miss them while I’m weeding the garden. They’d like to come along side me begging for the grass I’d pull.
I’ll miss watching my children ride them like a pony.

He was offered a Jonathan Park Album if he would ride on her and he really didn’t want to. I think you can just tell how nervous he was. But that set off a chain reaction and now she has given all of the children a ride. Even the 3 year old and nearly two year old came begging for a ride last night. A little man declaring, “I wannoo ride Daddy, I wannoo,” just couldn’t be denied. Brave little folks, I don’t think I could have been bribed to get on her back if I was them. I’m just too self conscious of the filth.

I didn’t stay mushy too long this morning. The normally easy-going gals decided to give us a run for our money while attempting to load them on the trailer. I should have known that would be the case since I spent the last several weeks saying, “Eh, get a bag of apples. They’ll walk right on up… piece of cake.”

Having fasted since yesterday, they eagerly came after the treats we offered which included a bucket of feed and apples.  They were apprehensive about the trailer though and it took several attempts for them to warm up to coming near it. When it became obvious that my assistance was needed for more than moral support, I took the baby inside the house and laid her down in the crib and came back armed with…Ahem… a brick-like loaf of sourdough I baked this morning.

It turned out very helpful that I had trained them to come when I called. They eagerly approached me willing to take my offering. They made a few attempts before the boys decided to be a bit aggressive. Doing things like guiding them with a cane, hoisting up their back legs which they weren’t fans of or collaring them which they really were not fans of!

Little Pig was much more eager to try getting in the trailer to get her treats and she strained and struggled to get as much food as she could reach, but just couldn’t get her back legs to cooperate. I thought of the verse about how the spirit is willing, but the flesh is weak. Meanwhile, Big Pig was off snoozing in the mud after having decided that the treats were just not worth it and the boys were getting hog panels to at least prevent them from wandering off elsewhere in the pasture. I suggested a ramp of sorts was made. I really believed that she would go in there if she could have gotten those hind legs to cooperate. One was constructed of rotten hay stacked on an incline with two small slabs of concrete laid on top.

Little Pig was corralled against the trailer and I tried making her happy with little bites, all the while calling for her, but she was clearly very nervous. Finally, though she just “emptied herself” turned around and nearly effortlessly climbed in thanks to the ramp. She went toward the back of the trailer snacking along the way and we blocked her from escape.

Now our attention was directed toward Big Pig who I thought would be a greater challenge. The boys did too so they worked to secure a few points of escape. In the meantime, a turkey was attracted by all of the goodies that were being passed out and decided he would go in the trailer. Trying to head him off, I ran up to jump in front of him, my flip-flopped shoe slipping in the contents of Little Pig’s aforementioned empty bowels. Boy, did the kids sure love that. Lil’ Stinkers! Oh wait, that might have been me ;D

I woke Big Pig from her slumber by chucking an apple chunk right under her nose. She followed me all the way back to the trailer eating the tempting morsels I threw in her path. Climbing inside, I firmly instructed my husband to be sure to let me slip out before he shut the door. The panel wasn’t used for a corral this time. I thought that it would spook her too much and that between my calling, the food scraps, and Little Pig snorting at her, that would be enough to do the trick. Finally, I had coaxed her to bring her front legs in- farther than she had attempted so far- but then she retreated. After two more efforts, when she was just about to bring up her leg, my husband swung the door shut bumping her in the rear to prevent her from backing out. She let out a frightful squeal (no doubt magnified to me by my being inside of the trailer with her now) and scrambled in.

In that instant, I screamed and then I yelled to be let out and slid past the hog and out the door.

Adrenaline pumping. Foot stinking. I stood there glad to be done with that and not so sad about their leaving anymore. I thanked the Lord they were in, we were all safe, I wouldn’t have to do it again for another year, and that it wasn’t as easy as I imagined since it caused joy to replace the sadness.

My title of Pig Whisperer still stands. Hopefully, I’ll not hold the title for a third time next year.

My little children were all so helpful (except for Ben who tore apart the glovebox in the truck)! They manned their stations bravely standing firm in the face (literally for some) of such a formidable foe making me glad that we were so close and intimate with these pigs so that they were comfortable around them today. We treated them all to ice cream from the local stand this evening as an expression of our gratitude.

One final item of note. For all of that work and effort, when it came to coming back out of the trailer at the butcher, it seems they were less than eager to leave and actually needed a little “encouragement.”

Can you blame them?

I’ll be cleaning out the freezer tomorrow for the it will sure be full on Friday!