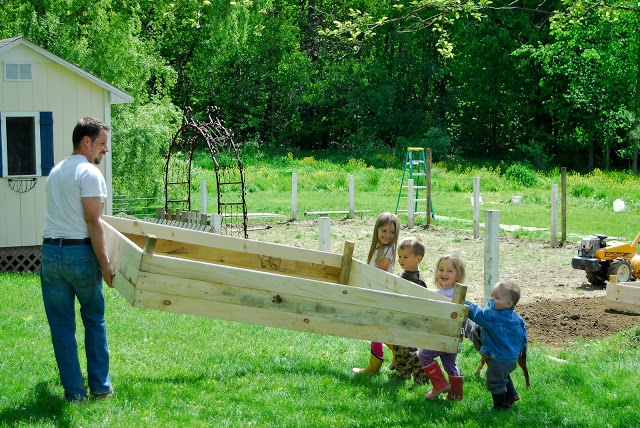 A small break in the dreary, rainy weather we’ve been having lately afforded us the opportunity to spend a day this weekend working in the garden.

I had planned to have these particular crops in two weeks ago!!

We*  built, installed, and filled the raised beds. To save a bit of money on the soil to fill the beds, we tilled under the ground beneath each bed and filled them to half way with a mixture of purchased mushroom compost (we just started our own pile this year and it has become quite an obsession of mine!), soil collected from the rows between the beds, and for the beds containing root crops sand. We added sand to our sole raised bed last year growing carrots and we grew our very first carrot after years of trying! We’ll build the soil level every year by adding a bit of compost until it’s as high as we want it. 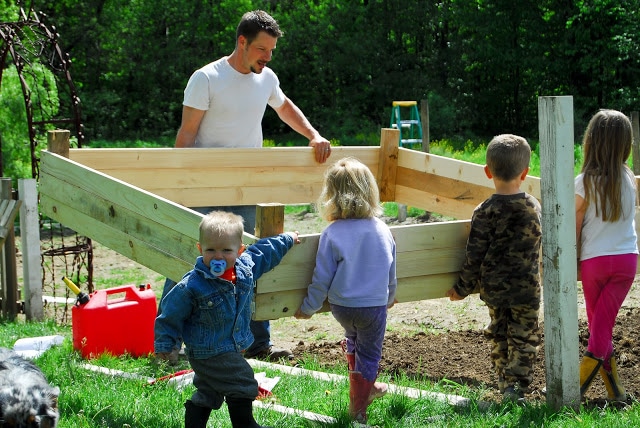 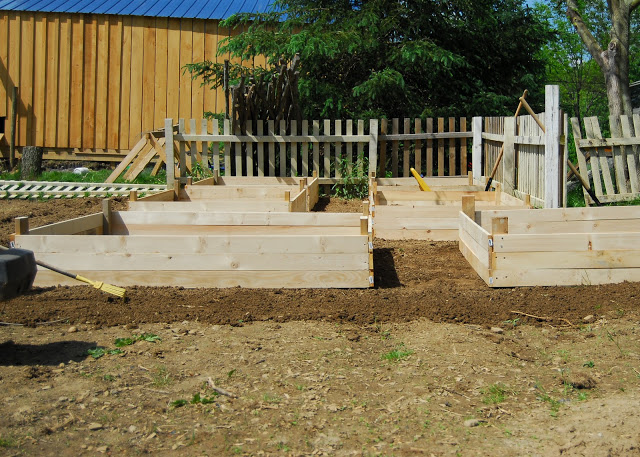 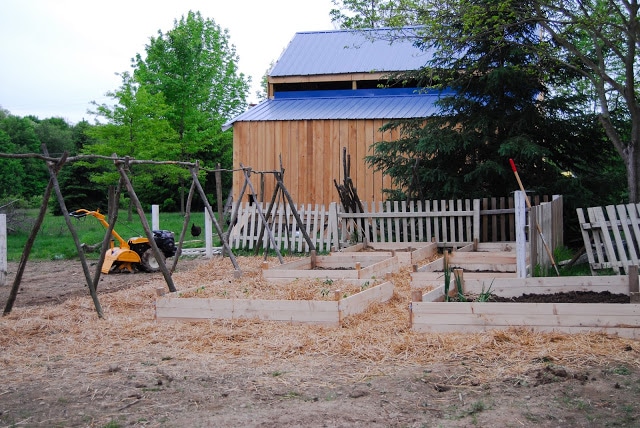 Knowing that all crops do not necessarily thrive in a close-spaced raised bed environment, we’re raising lettuce, carrots, parsnips, and sweet potatoes in these beds. Raised beds were chosen for the root crops so the looser soil will give them plenty of room to grow and the other cooler weather crops so the beds can be converted into cold frames to expand the season a bit. We also planted peas under the trellis. 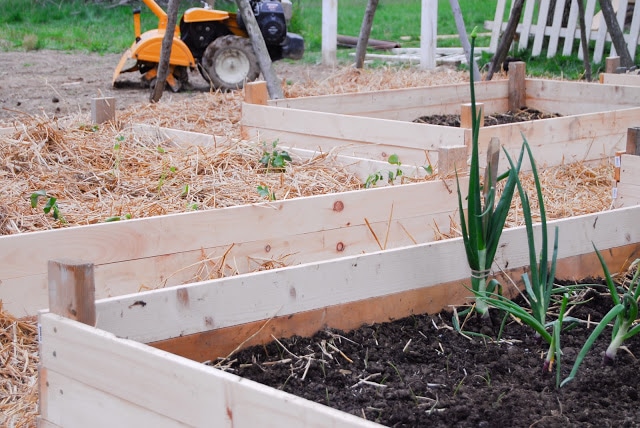 Last year, I planted 75 onion seedlings!! And not one of them grew. At least that’s what I thought. This spring while walking through the old garden, we found eight that had actually grown! I transplanted them to the onion beds since that part of the old garden will soon be pasture. 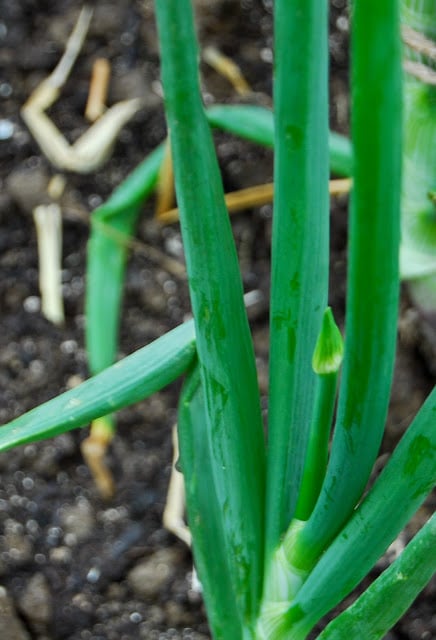 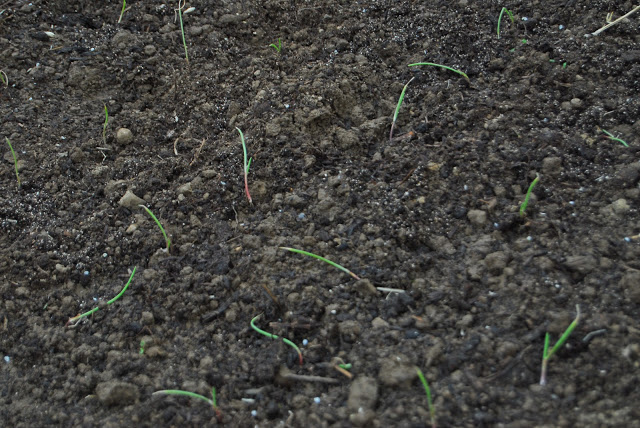 I starting growing these onion seedlings in January. I kept them trimmed back  to about 3″, but it seemed every time I gave them a haircut, they would send up a new leaf while the trimmed one died back. The leaves thickened up a bit from the initial size, but never to as thick as I’d like to have seen. The root system on these little guys was phenomenal (in my opinion) with most being nearly 8″ long. 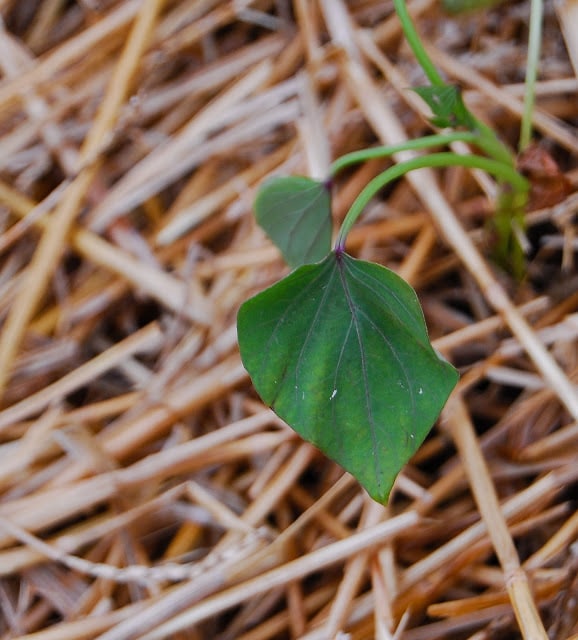 The experiment to grow sweet potato slips was a certain one. After two attempts, we threw in the towel for this year and purchased 25 at the local ag store. Supposedly, to grow a sweet potato slip, you must suspend a sweet potato (or a portion of one) in water. The roots will grow in the water and the plants the top. The plant is cut away and re-submerged and then the roots will grow and this is what you plant. Being frugal, we started with trying cuttings, but they molded within days. The second time we tried the whole potato, closer to successful growing attempts I’d seen on the internet. That time, they grew roots as well as  the mold. It was very smelly to say the least. Oh well, maybe next year. 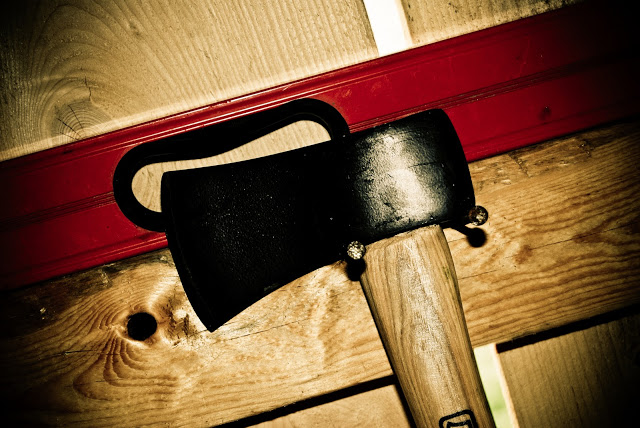 Finally, last week was D-Day for the 15 broilers that were purchased as filler for the order of new hens we added to the flock. We procrastinated a bit as it was such a production last year that the boys were really dreading it. So at 11 weeks, they’re time was far past up. Surprisingly, there was not even enough leg meat on the birds to even bother with saving the whole birds so they were just breasted. This made the job so much easier for my husband, but produced a measly 23 pounds of meat. Quite disappointing!!

The work load was also cut in half (pun intended ;D) for him since this year, instead of being primarily a bystander in the operation, my eldest son played the role of butcher! He’s 12 years old and to be honest, when my husband proposed the idea, I didn’t think that he would accept the position. But he surprised us both and slaughtered 12 birds. Needless to say, I’m quite proud of him and this step he has taken towards manhood!

They both reminded me that butchering the chickens was usually a task reserved for the womenfolk back in the day and I can’t help but be grateful that God placed me here when He did. Otherwise, I think my family may have starved! I just don’t think that I could have done it.

One thing that I learned about raising the meat birds this year was to not freeze the meat immediately after butchering. We did that last year and if it wasn’t in a crockpot for at least 6 hours, the meat was very tough. This year we let it sit for 2 days in the refrigerator prior to freezing and the meat was tender even though it was only skillet cooked!

Well, I spent last week telling everyone that I was holding the baby hostage until those two tasks were completed. Obviously they’re done now, but I’m still pregnant. Looks like a little tiny someone forgot to get the memo!

*Anywhere this pronoun is used, please understand that my role was primarily in a “supervisory” capacity. I think the only real work I was physically capable of doing was the transplanting, seeding, some measuring, and a bit of scattering of the hay mulch.

« How to Measure Clay Content in Your Garden
Spring Sowing »